It took senior editor Nicole Lee a bit of time to figure out where the Google Nest Hub (originally the Google Home Hub) fit into her life because it seemed too small to be used like a typical home assistant device. At a mere 7 inches, the smart display is meant to be a personal assistant for any room of the house. Because the Nest Hub lacks a camera, it's even good for the bedroom. Once Nicole started using the Nest Hub like a digital photo frame, albeit one with the smarts to control home automated devices that can also use Google apps, she began to see the strengths of this discreet commected display. In the end, she granted the Nest Hub a commendable score of 87. User reviewers, who always tend to score more harshly, gave the Nest Hub a passable score of 72. Here's where they differed, or agreed with Nicole, on the product's successes and shortcomings.

Nicole felt the Nest Hub's no-frills design and fabric-clad hardware gave it a minimalist, friendly look that helped it naturally blend into a room. On this, user Richard agreed with her, stating that "looks-wise, it's pretty sleek and doesn't look like the monolithic block that Amazon went with for the Alexa so it blends in a little better." However, bxstrb said they had some issues with the huge bezels around the device, though they admitted this was "more of an aesthetic preference on my end." 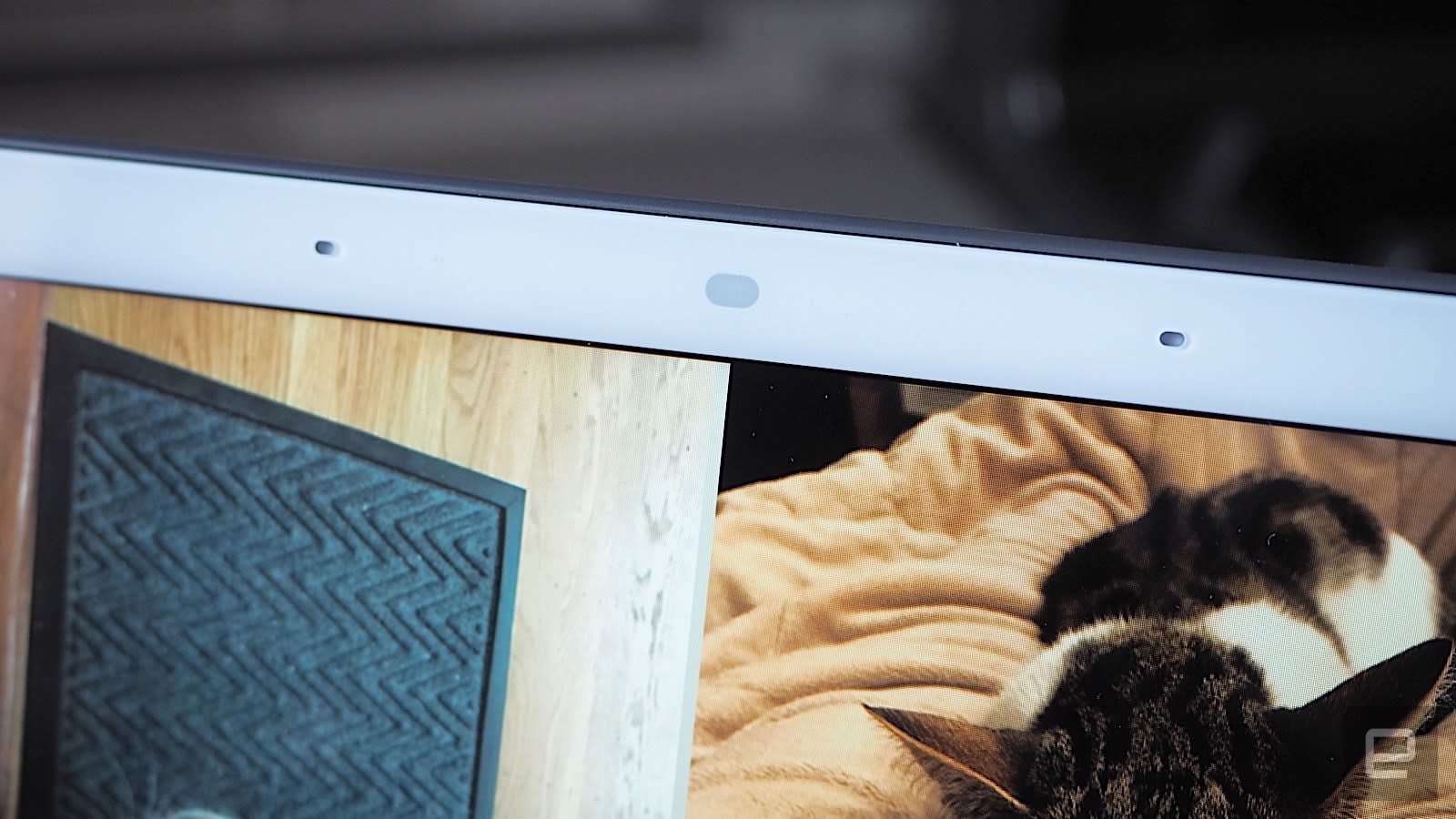 At the top of the Nest Hub's display is a small sensor that works with Ambient EQ, a feature that automatically detects the lighting in a room and adjusts the Nest Hub's screen to match. Though it only works when the display is in standby, Nicole found this particularly useful in a nightstand device. Some user reviewers enjoyed the feature, with jpfeifer saying "the light from this thing is less intrusive than most alarm clocks I've used," and bxstrb finding that the screen on the Nest Hub "is better than my Echo Show when adjusting to ambient light throughout the day."

However, HangmansNoose counted the feature as a con: "The display gets way too dim in dark rooms," they stated, and "you can adjust the brightness for when the Hub is active, but the light sensor automatically drops it back down to the lowest brightness setting once the Hub goes idle. It dims itself to the point where it is barely readable." Ssallen concurred, saying the "screen brightness drops so low when the lights are off that it's not easy to see the time. I wish they would bump up the brightness even just 5-10 [percent]." 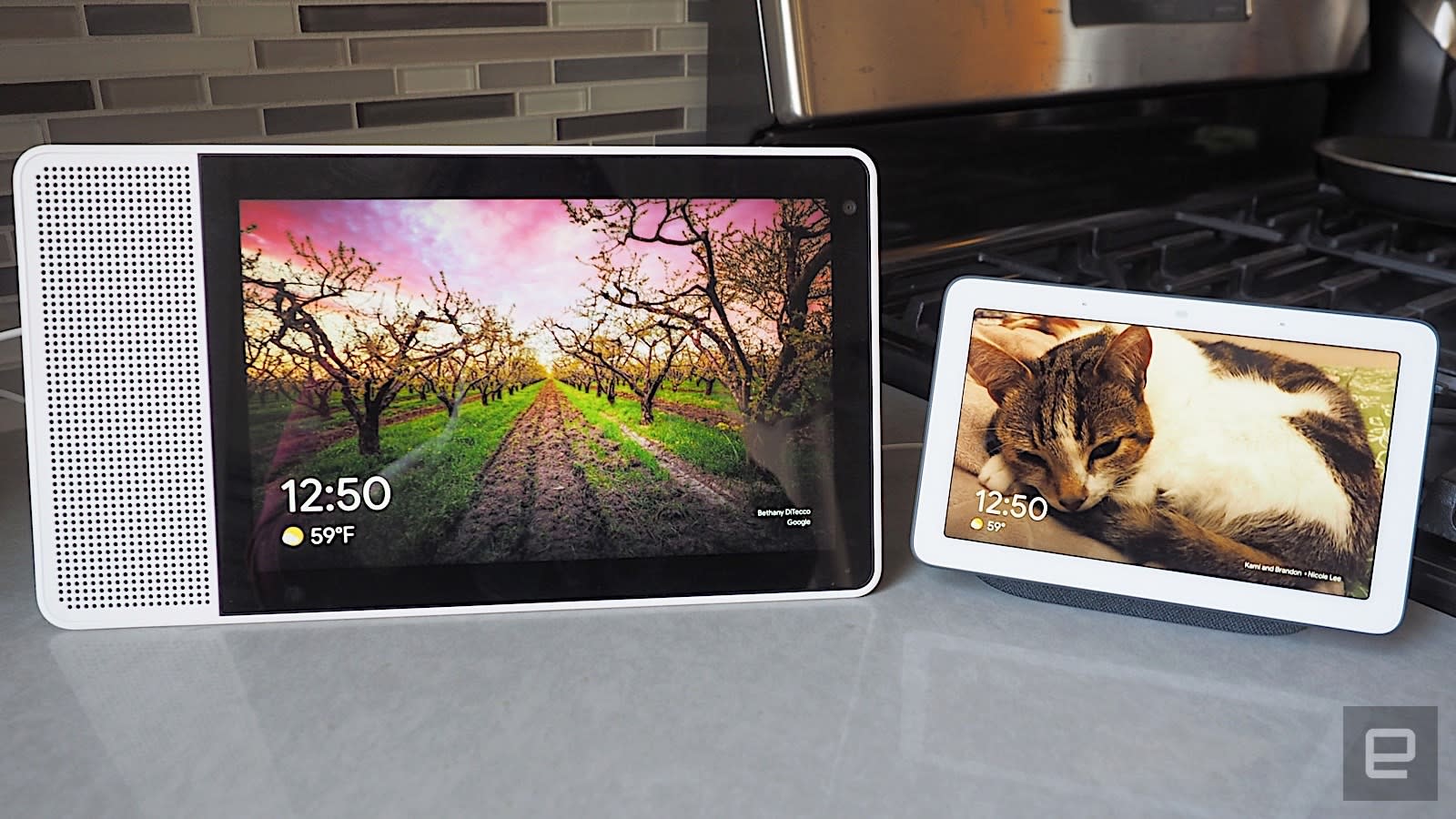 Though the screen on the Nest Hub is small, Nicole found the image quality to be crisp and colorful at any angle. Most users were likewise impressed with its display; jpfeifer said the screen was "excellent and likely its best selling point," and the "integration with Google Photos makes it hands down the best digital picture frame I've ever used." Ssallen said the display "looks fantastic," and Kevin found that everything he used to do with his bedroom Home Mini is improved with the addition of a screen on the Nest Hub. However, bxstrb felt it was "way too small" and said that "a screen this good would thrive with a bigger size." Richard, who thought that watching YouTube was just okay due to its low pixel density, but added that "you generally won't be viewing it as closely as you would a phone or tablet so it's not actually that big an issue."

Nicole's experience with the sound on the Nest Hub led her to state that while the device "isn't great for listening to music," it was "excellent for podcasts and audiobooks thanks to loud, crisp vocals." The user reviewers were on the same page as Nicole; Roy stated the device's "only minus is the not so great sound quality for listening to music." Cynic13 said the "audio quality is only mediocre -- think Google Home Mini." jpfeifer felt the audio "isn't by any means stellar," and Gibhunter found it "poor and often not loud enough for videos that are quiet." 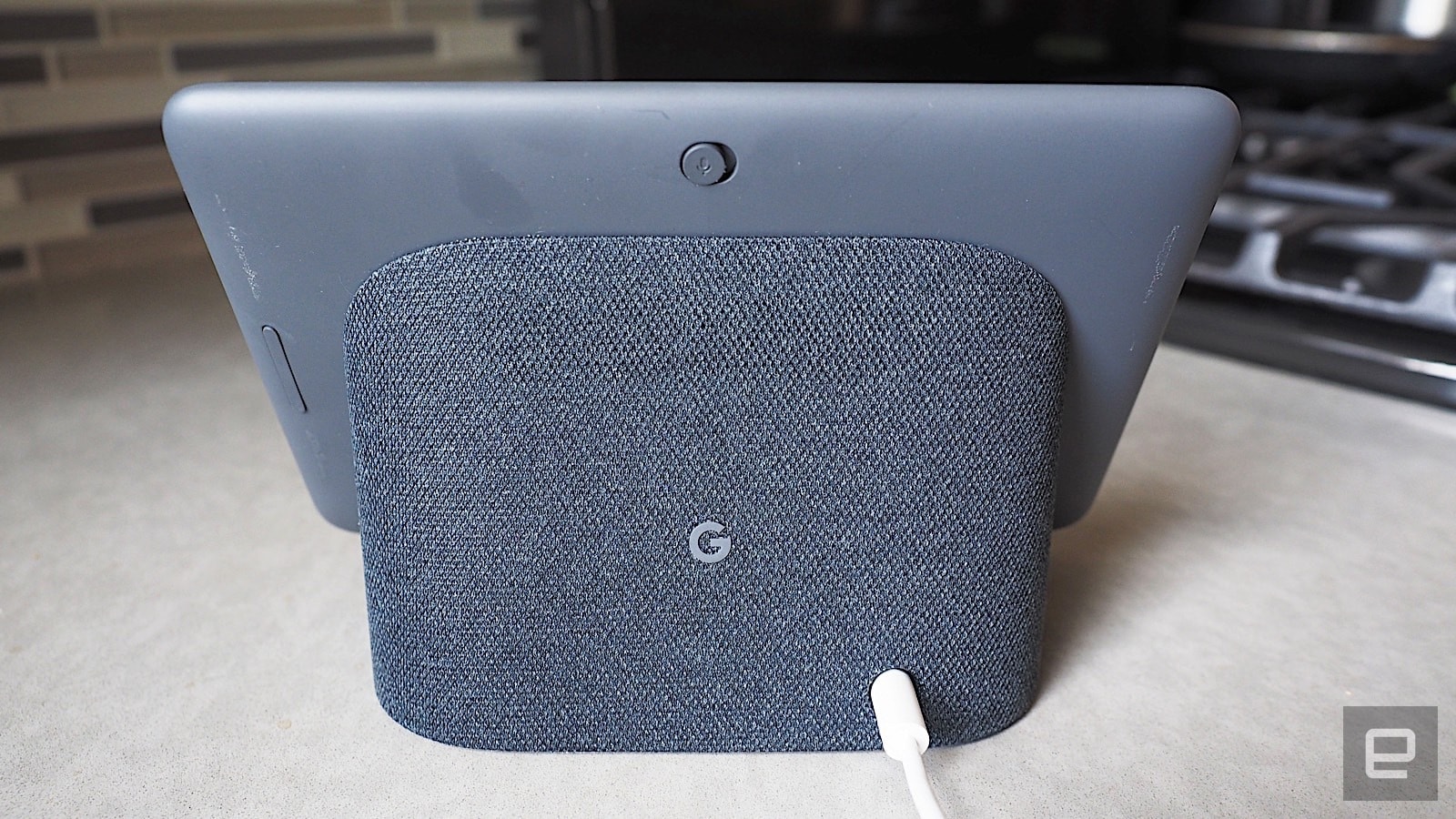 The software experience on the Nest Hub was a bit touch-and-go for Nicole. Though it worked well with other Nest devices and Google apps, it had limited YouTube functionality and also became confused about which display to use for commands. Richard felt "it's pretty good all round with basically anything that works with other Google home devices" but was frustrated that there was no Chromecast support for Audible since it's owned by Amazon. Jpfeifer agreed, saying "I have a huge Audible library and not being able to use it on Google assistant has always been annoying. While there isn't really anything Google can do about this, it does prevent me from using the device for something I listen to every day."

Cynic13 also had some issues on the software side, saying the "home automation interface is really awful, with too much whitespace and awkward, non-configurable organization." Also on the cons list for Cynic13: "All devices are organized into rooms, which doesn't match how I want to control things." "Media control is similarly awkward with Google Cast limitations but without the full Google Play Music or Play Movies interface," they continued. Gibhunter also was frustrated by the stripped down Google Home features, saying the interface "is too limited to be usable." Also high on their list of aggravations was "constantly having to cast to it to watch videos while doing dishes because there is no Netflix support built in and it will not show my YouTube channels recommendations." They were also irritated by the differences between the assistant in Android Auto, Google Home, Google Home, and the phone version, stating that "it should be the same assistant across the board." 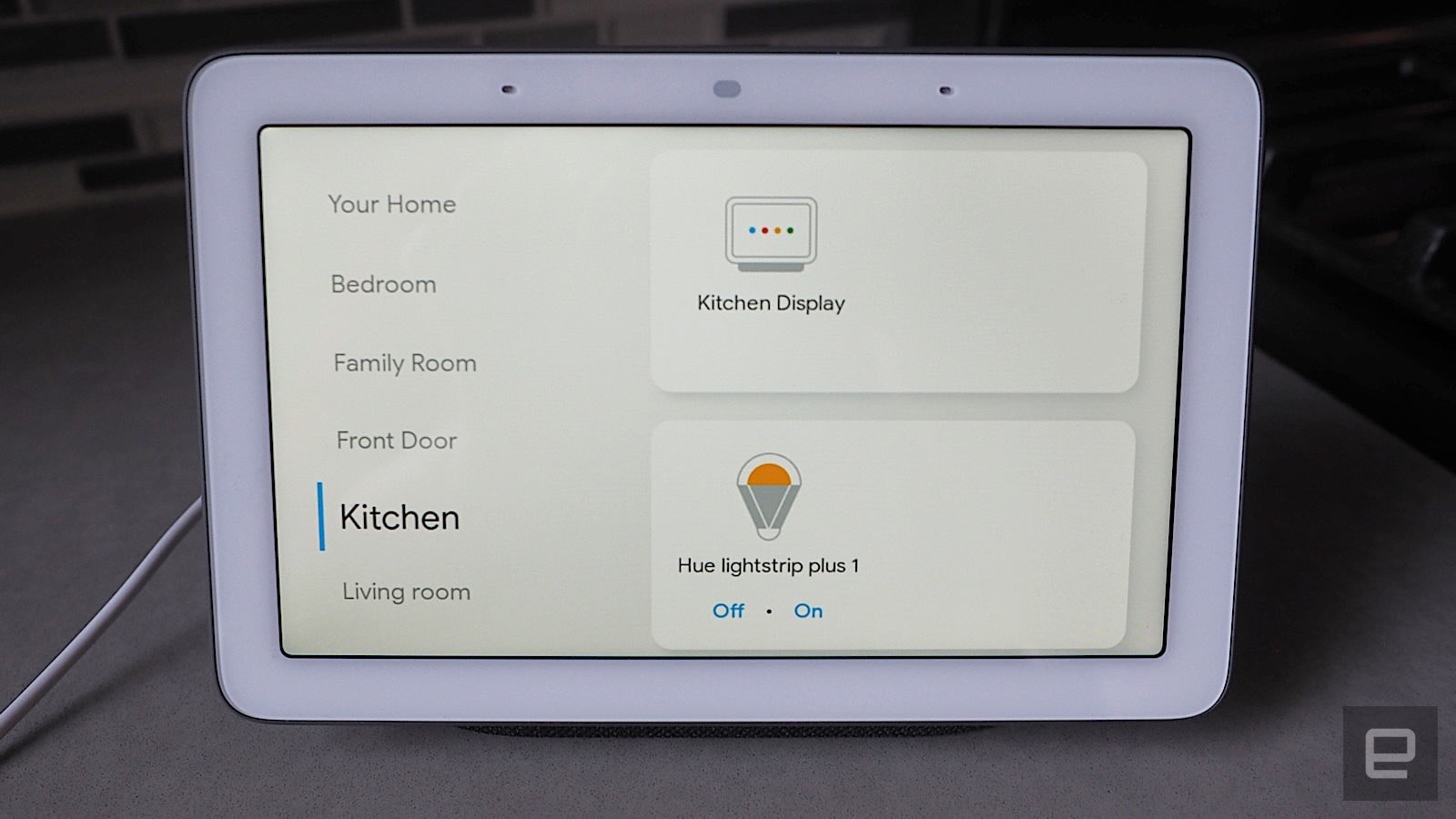 Not everyone was disappointed by the software on the Nest Hub: Richard said that "usability is generally good, and Google is updating the UI over time. In its latest version, controlling your home lights, etc, is really quite nice." Bxstrb said the "UI is also better than the Show, especially for smart home device control like the lights," and that the "voice recognition is pretty good, picking me up from across the room even when the TV is on." Ssallen enjoyed "managing the lights with only a simple swipe" and that the Nest Hub "allows me to turn off lights without waking my wife, unlike a voice only assistant. It also works great for an alarm clock being able to easily snooze and set new alarms vocally."

When Nicole reviewed the Nest Hub, she felt it was a good deal priced at $150. However, the price has now dropped to $130. And users found some even better deals, making the device well worth a purchase. Bxstrub said the Nest Hub "has recently been on sale as low as $59 to $79" and that it was "completely worth it at that price." TigerInCO has owned a Nest Hub "since the first time the price dropped below $100. Is it worth $129? Maybe. Is it worth $75? Definitely." And Jpfeifr said that "at full price the Nest Hub is something that is worth the money if you're in the market for a small screen. With the frequent discounts, it's something that you can't believe the value you're getting out of it for the price." 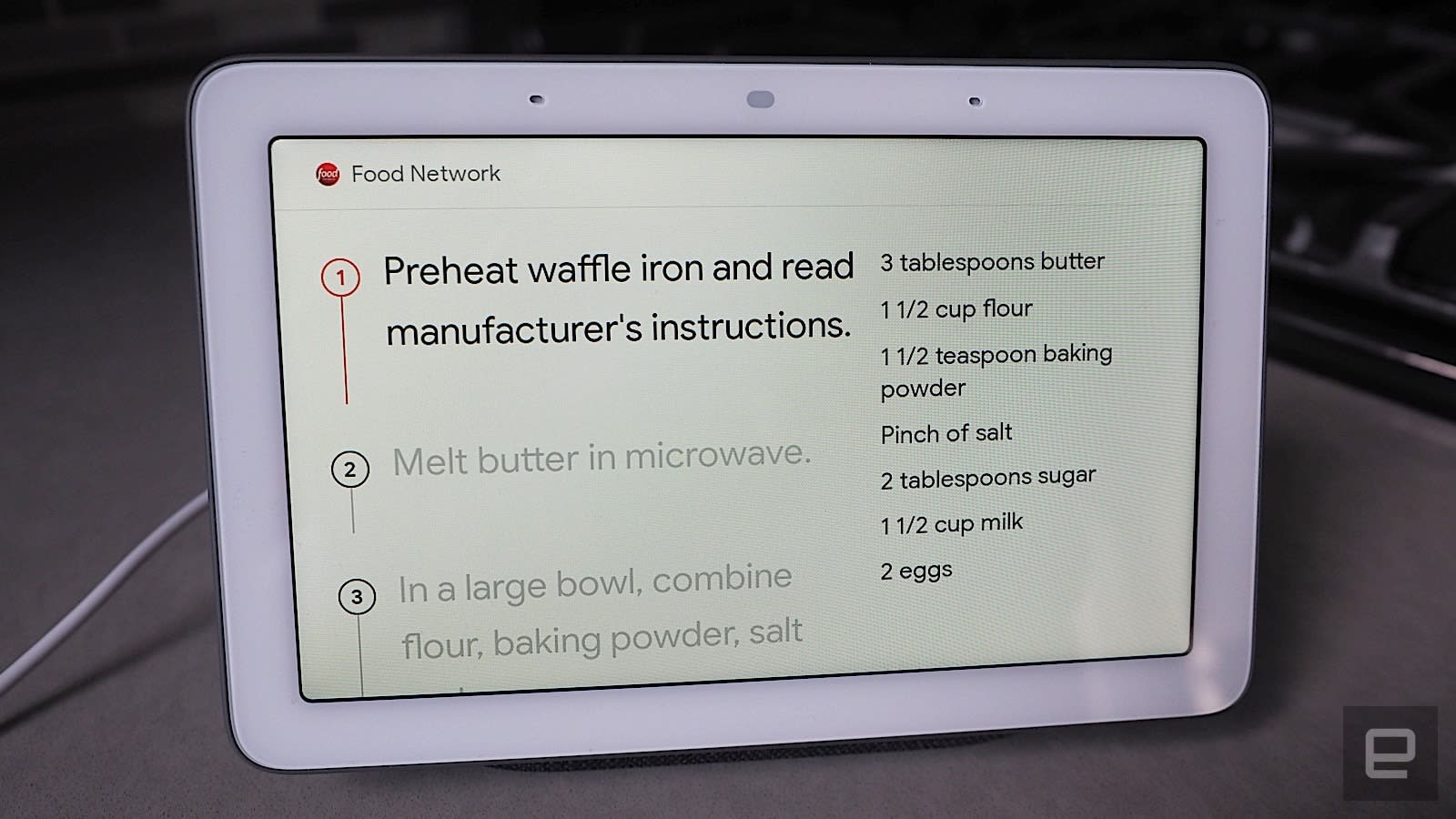 Ultimately, while most users had positive things to say about their Nest Hubs, there were a few drawbacks. Kevin had issues with setting a default Chromecast for video playback, and HandmansNoose had problems with the microphones being unable to pick up voice commands. Richard felt that the "app integration is not as good as Alexa, and there's no real equivalent to the skills." Gibhunter said the Nest Hub is "a lot less useful than expected because of its poor UI." Cynci13 even stated they "regret buying this device. It's nicely made but doesn't come close to its potential."

On the other hand, Brent said it was a "great addition to the kitchen and or bedroom," and bxstrb said the Nest Hub is "an even better buy than the Echo Show 5" and its smaller screen. Richard, who thought that "the Nest Hub is a solid product which will improve over time," added that the device is "a great way of listening to music and podcasts, and watching YouTube but [its] star party trick is the recipes feature which allows you to ask Google for a recipe. It returns a selection of sources and you pick the one you want, from there the Hub will list ingredients and steps which you can control entirely with your voice, which makes for a much more hygienic replacement than using your phone." And TigerInCO said they "would and do recommend this to everyone that is looking at home automation or just as a slight upgrade to a Google Home Mini."