The PowerWatch 2 delivers GPS powered by your body heat

Now with a solar panel too, it promises a lot and almost makes good on all of its claims.

When I first heard the pitch for the PowerWatch 2, a GPS running watch that didn't have a 'battery' and generated power from your wrist, I was incredulous. GPS is notoriously power-hungry, as is optical heart-rate tracking. But after a week with the latest PowerWatch, I found the makers have made good on their claims, even if there are more than a couple of caveats. Curious?

The PowerWatch 2 is another wearable designed to sit in the space between a smartwatch and a fitness watch. It offers fitness tracking, smartwatch notifications, heart-rate monitoring and GPS. The company says it's positioning the new PowerWatch as an alternative to high-end running watches, like Garmin's Fenix 6 and Suunto's 9. It's ruggedized, for extreme marathoners, and is water-resistant to depths of 200 meters.

It's also crazy big, the sort of big that means you need forearms the size of tree trunks for it to look in proportion. The case is 47mm wide and 16mm thick, clad in chunky steel and screws aping Casio's G-Shock aesthetic. It has a full-color LCD screen, which also has serious Casio vibes. It's perfectly readable in daylight but needs the backlight as soon as it gets dark.

Matrix Industries builds products that use thermocouples instead of batteries for both wearables and industrial products. A thermocouple uses the difference in temperature between two metals to generate a tiny electrical charge. It's the system that has powered most self-winding watches for decades, but little else, because the energy created is so minute.

How thermocouples work, courtesy of the BBC in the 1970s.

To bolster the PowerWatch 2's power generation ability, the watch also has a solar panel in the bezel -- but, in my experience of wearing lots of warm clothing in a British winter, the solar cell won't get much of a work out in colder climes. Matrix hopes, however, that you'll expose the watch to direct sunlight to help keep its charge going.

Rather than a battery, the PowerWatch 2 uses a massive capacitor nestled inside its body, which stores the generated charge. I assume that Matrix's secret sauce is around the voltage regulator that trickles out power when the watch is in regular use and offers more when GPS is called for.

To avoid confusing users, Matrix has a simple battery icon on the watch and talks about a "battery" in its messaging. Its representatives said that it's using terms and symbols that people are already familiar with, rather than trying to explain, in depth, its weird power systems.

The first thing I noticed when opening the box was the charging plate, something you may feel suspicious about. It's just a thermal plate, though, and warms up as if it was your wrist, helping to power the watch if it gets seriously low. In almost a week of testing, I've not felt the need to use the plate, and I doubt others will unless they leave the watch on a cold shelf for weeks on end. There's no suggestion about how long it'll run before conking out in this state, either.

Setup takes about a minute. You just need to scan the QR code from inside the companion smartphone app and wait for things to set up. You add your vital statistics, then begin wearing it. Hit the down pusher, and you'll be told how many steps you've taken, calories burned, your resting heart rate and the length of your sleep.

Hit the up pusher, and you can scroll through previews of the last seven messages your phone has received, like pretty much every watch. There's no ability to respond on either iOS or Android, and there is limited overall Android support right now. The team says updates will improve the situation next year, including longer previews and sending pre-written responses. 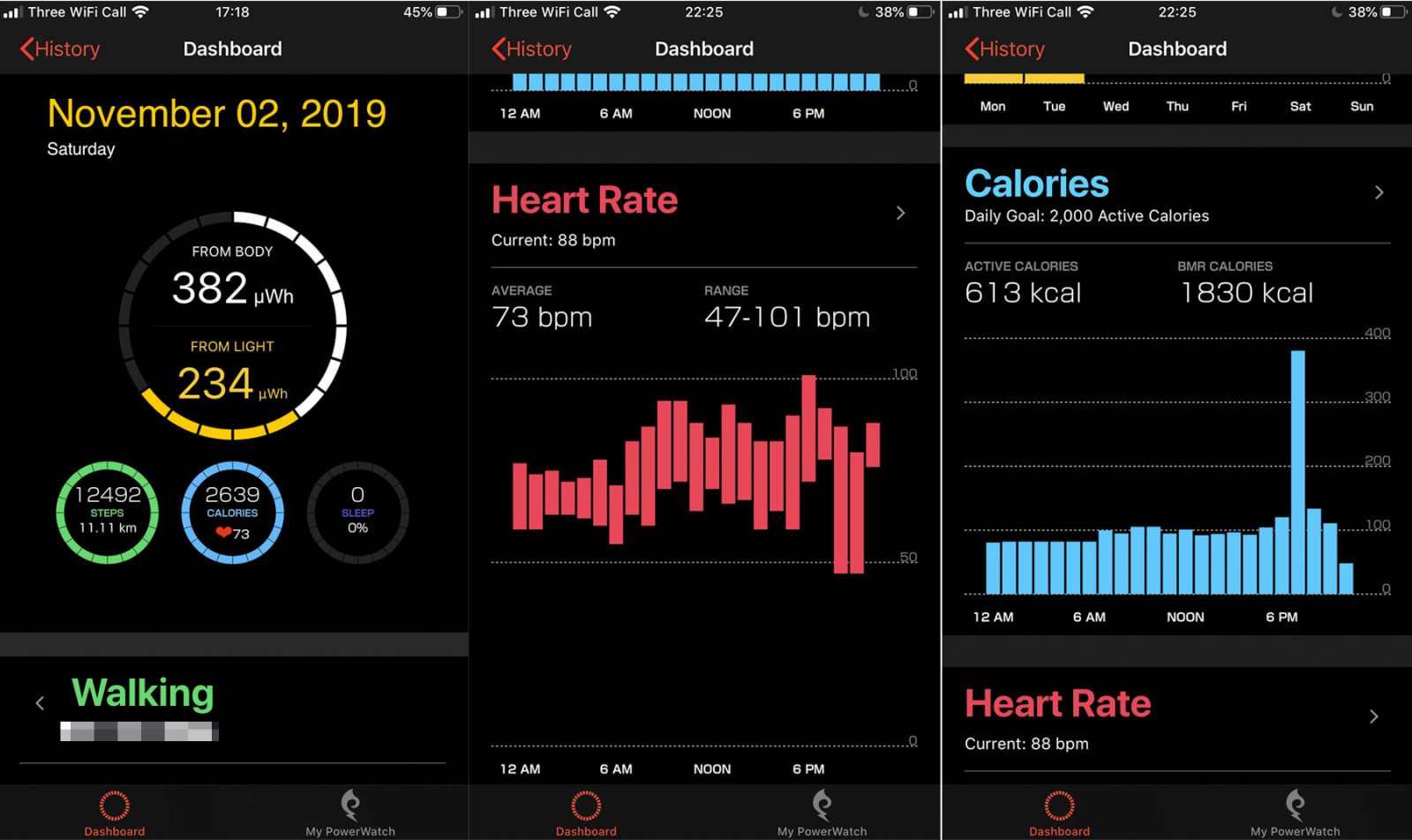 The front screen is relatively information-dense, for a smartwatch, which is a refreshing change from the light screens you get on other watches. At a glance, you'll see the time, date, step and calorie counts as well as any unread messages. You'll also have a battery icon showing the watch's stored power level, which is explained in the boxout.

The step tracking seems a little generous, counting around twice as many steps as, for instance, my phone. Sleep tracking, too, certainly needs adjusting, after I took it off to take a shower and then forgot to put it on for an hour, it started counting the stillness as sleep. This is the sort of thing you'd hope the company would fix before the watch reaches the user.

Now, let's talk about that GPS, which is clearly the biggest and most exciting feature. After all, most GPS watches can run for the duration of a marathon (or two, depending on your time) before dying. Matrix's claim that the PowerWatch 2 can run GPS functions without a battery has a couple of caveats, which we need to delve into.

First up, the company says you can use GPS for 30 minutes per day -- and only 30 minutes per day. But, if you skip a day, you can "save up" that power, using it for 60 minutes the following day, 90 after that, and so forth. With my battery marker reporting full, I used it for 1 hr 47 minutes in a single go, only knocking about a fifth off the meter, so I assume Matrix has been very conservative in its estimates here.

I understand you could, actually, use this watch for much longer periods at a time, but you'll need to be mindful of your energy consumption. If you want to go running (with GPS) for ten hours, that's possible, but you'll need to not tax the watch again until you've recharged its capacitor. And that could take several days, or weeks, so you need to be judicious about using and recovering your power. 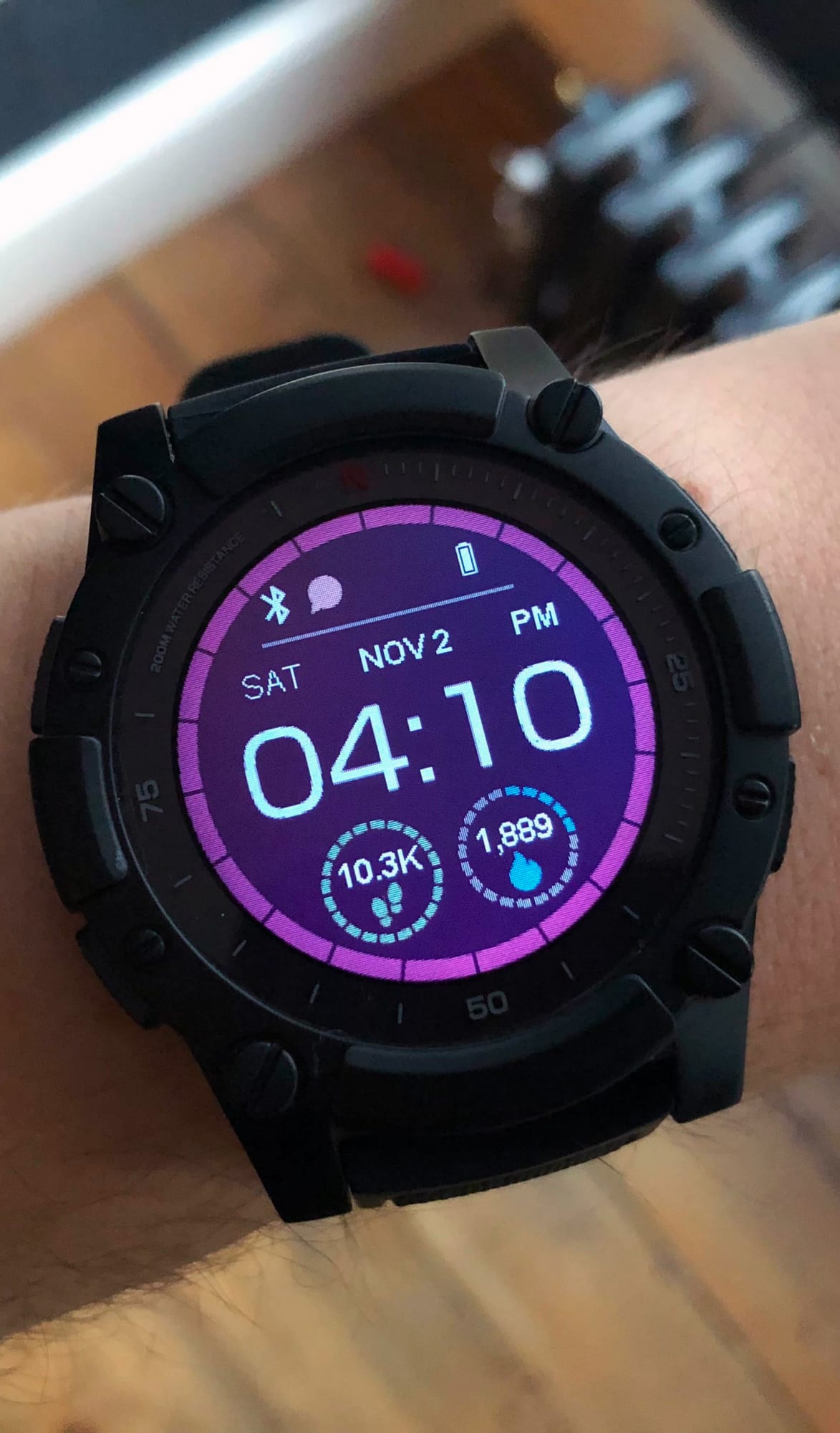 Sadly, the watch takes a long time to find the GPS satellite, often taking around five minutes. On a walk, I'd covered 695 meters before the watch had made a connection. Like many other companies, Matrix is promising a forthcoming over-the-air update to help that performance improve.

The PowerWatch 2's smartphone app is pretty bare-bones, with a calendar-based layout for breaking down your historical activity. But there is one pretty cool feature that tells you how well you've recharged your watch each day. Front and center, looming over smaller graphics showing your steps, calorie burn and sleep, is a graphic showing your power generation.

It breaks down how many microwatts you've generated from your body heat against those from the sun. The day I wrote this, I stayed in, didn't walk around much and tried to keep as warm as possible under a thick hoodie. I generated 82 microwatts (μWh) from my wrist and a further 64 μWh from exposing the solar panel. And it's one of the most delightful things to look at and play with, especially in the context of trying to generate more power for your watch.

The PowerWatch 2 is an interesting device, and one that kinda/sorta makes good on its impossible claims. You're not getting a watch that can do everything a conventional running watch can, but it will save you carrying another charging lead around. And while there are parts of the experience that are very rough around the edges, Matrix has promised to remedy those.

But, with just 11 words, I can kill off a lot of interest that many you may have had in owning one of these devices: The PowerWatch 2 starts at four hundred and ninety-nine dollars.

And that's just for the base model, which I'm testing, with the black steel finish and a rubber strap. If you want a silver model with a stainless steel bracelet, it'll be $599, while a titanium finish and stainless steel milanese bracelet costs $699. "Yikes" doesn't begin to cover it.

It's a lot less than, say, the $700 Fenix 6, which Matrix is positioning the PowerWatch 2 against, of course. But it's a lot for a product that doesn't promise to do half of the things its rivals can. That may change in the future, of course, but for now the PowerWatch 2 remains a curio, a sign of a possible power-efficient future, rather than the device for everyone today. But it's available to buy right now, should you want to test those claims for yourself.

All products recommended by Engadget are selected by our editorial team, independent of our parent company. Some of our stories include affiliate links. If you buy something through one of these links, we may earn an affiliate commission. All prices are correct at the time of publishing.
The PowerWatch 2 delivers GPS powered by your body heat
gear
GPS
Industries
Matrix
Matrix Industries
PowerWatch
PowerWatch 2
Thermocouple
wearables