Real-life users make a case for why these earbuds deserved a higher score.

Though he's reviewed more than a dozen audio products for Engadget this year alone, senior news editor Billy Steele hasn't found any he disliked more than Samsung's Galaxy Buds. They earned a pitiful 69 from Billy, who was endlessly frustrated by their tap controls and lack of features. They took too long to pair and he wasn't impressed by the audio quality either. However, our users actually rated the earbuds higher than we did, awarding the Galaxy Buds an average score of 74. Here's what they had to say about their experiences with the buds as long-term users. 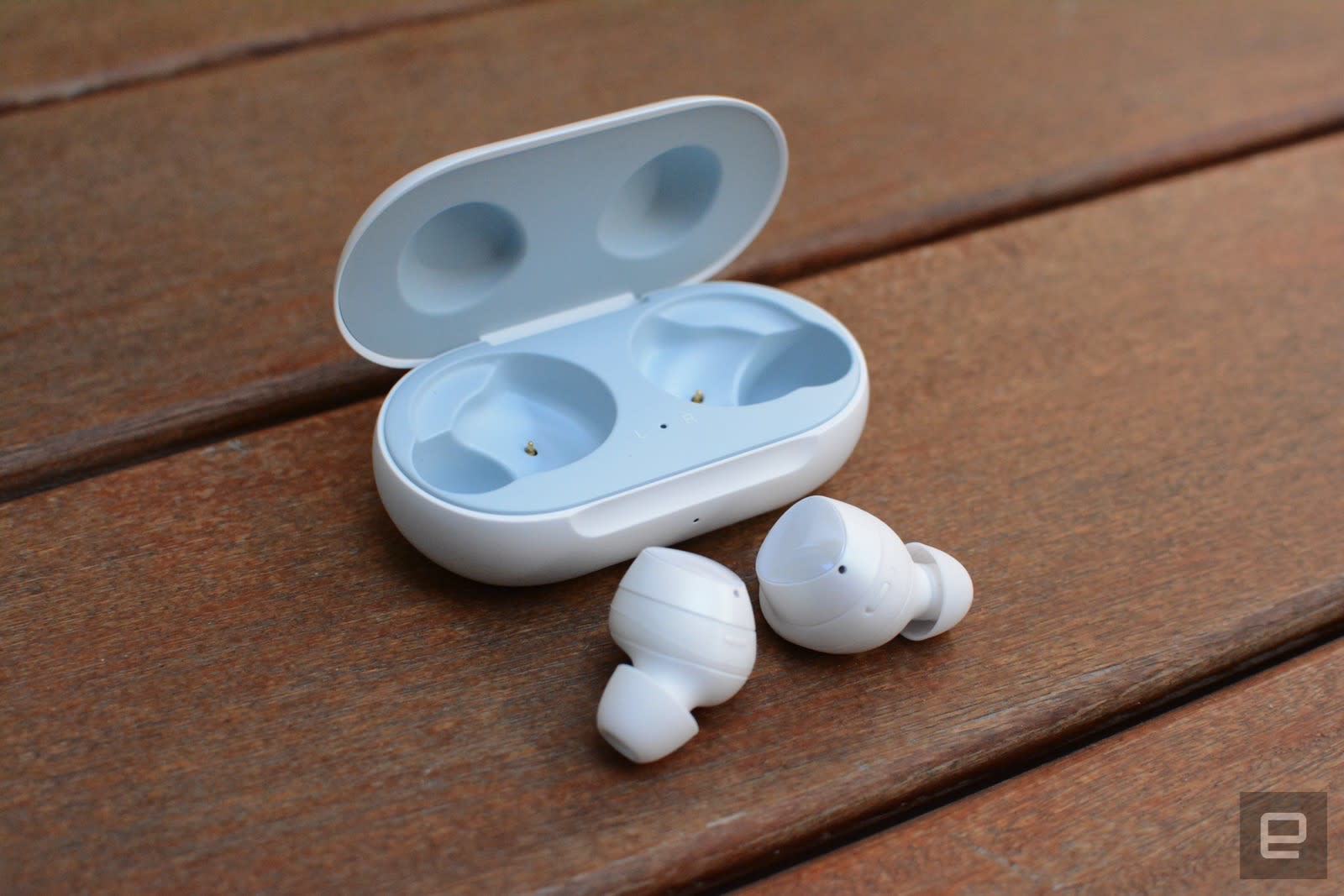 When it came to the physical design of the Galaxy Buds, Billy liked how the smaller size meant the buds hardly stuck out of his ears and made them more comfortable to wear. Users largely appreciated the compact size of both buds and charging case; Jeremy said he loves the case, while Jon felt it fit nicely in his pocket. Julian also found the case "light and easy to carry" and Yielar called it "nice and slim." Zeddy described the buds' form factor as "one of the most subtle headphones I've ever used" but clarified that "they might actually be too subtle as I'm approached at work all the time when on a call."

One of the most important things about earbuds is their fit, and here users were well satisfied. RK called them "extremely comfortable," and Babydinosaur said they "fit well into the ears, have never loosened or fallen out and don't cause aching any more than other earphones." Keyana declared the fit "light years ahead of the constant drill-them-into-my-ears-and-hope-for-the-best way of the IconX." Justinc92 didn't worry about the buds falling out, even when riding a motorcycle. Sjaak, b4ur2old and Jonathan all said they had similarly satisfying fits when exercising or at the gym. ScottPhil had one qualification: He uses Comply foam tips for isolation, "otherwise the Galaxy Buds would be unusable on my usual running routes along busy roads." 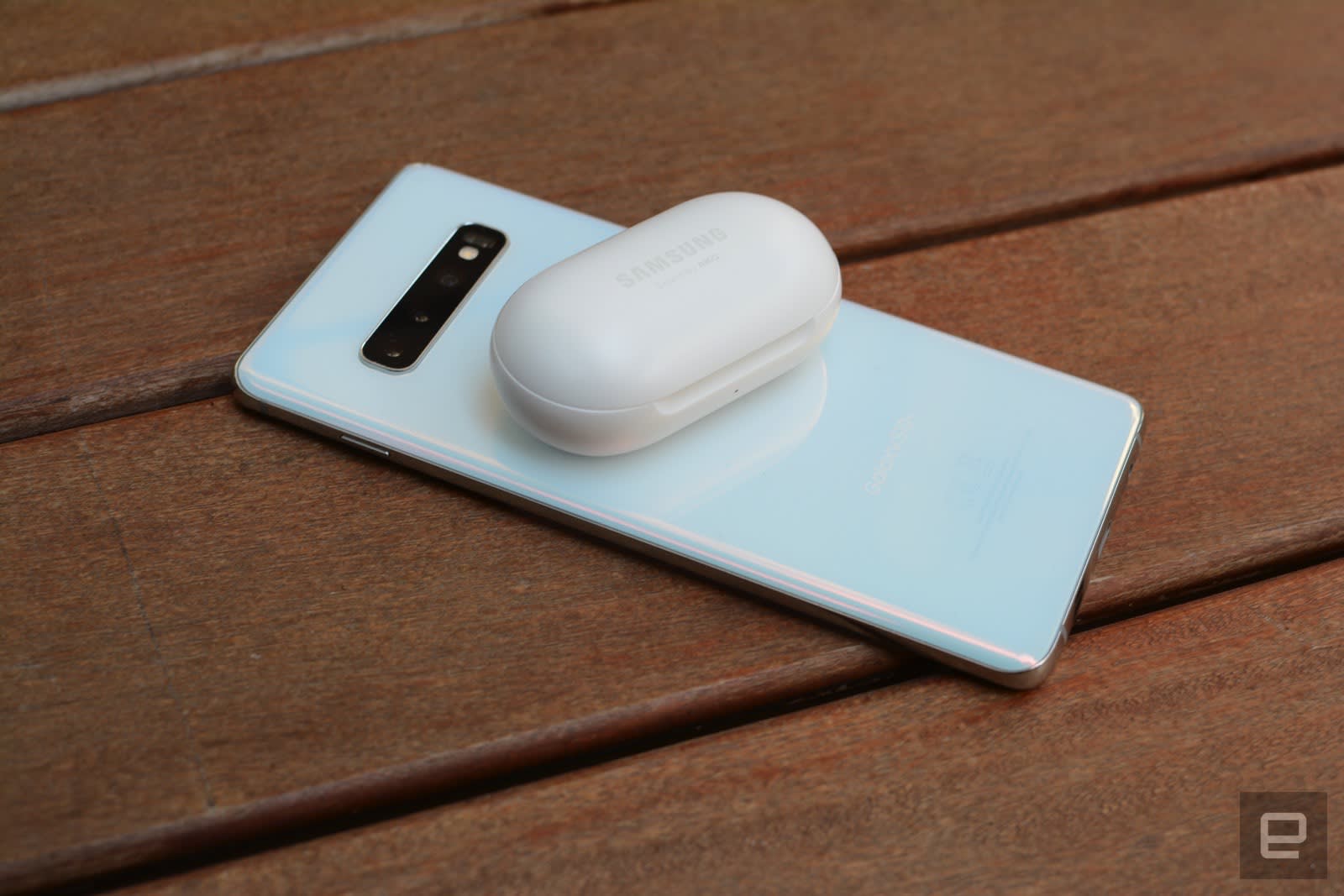 While Billy felt consistently frustrated by the controls on the Galaxy Buds, none of our user reviewers felt the same. Overall, users seemed satisfied with the controls -- Sjaak was pleased there were "not too many over complicated features," and Yielar said there was everything "you'd expect including volume control." Jon said he's "gotten proficient with using the tap controls that handle moving through the music," and "start/stop/pause is flawless." Zeddy likewise said the controls worked and enjoyed the tapping action. However, Fidel Eladio noted auto pause was missing (the Galaxy Buds require users to remove both buds at the same time to activate this feature, which also irked Billy), while Justinc92 added that their only minor complaint was with the volume control.

While the Galaxy Buds charging case holds a single charge, the earbuds can also be juiced up wirelessly via Powershare. Billy listed the solid battery life as a pro in his review card, and our user reviewers agreed with him. Babydinosaur said they never found themselves wanting more battery life, and Julian said he found the charging case carries more than enough to charge the Buds fully at least once. Justinc92 appreciated the wireless charging, saying it "really comes in handy when I forget to charge them at home," which is a common concern with wireless headphones or earbuds. Yielar really enjoyed the wireless charging since "I can simply throw them on my wireless charger as needed," but also added that the Buds held a "decent six-hour battery life, and another seven hours worth when charging using the case." 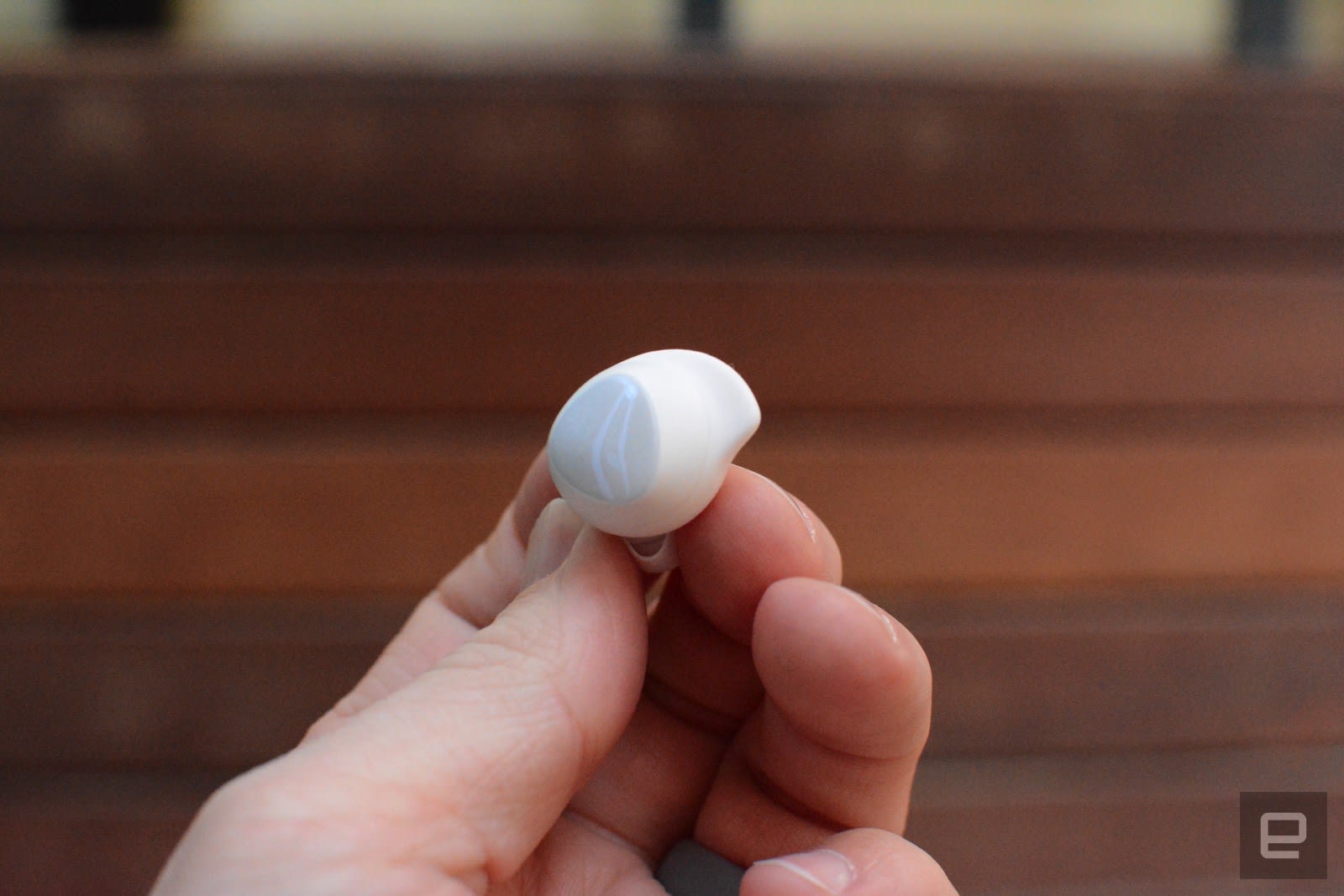 Next to fit, one of the most important aspects when reviewing earbuds is sound quality; Billy found the Galaxy Buds satisfactory but he preferred the experience with the Dynamic EQ preset on. However, the user reviewers were generally positive and even enthusiastic about the audio. Keyana found the sound richer than the IconX, Justinc92 called its quality great and Zeddy thought it was wonderful. Babydinosaur said the audio "is rich and easily heard during a journey on the noisy London Underground." LordRahl72 said "these Samsung buds have a very nice sound to them, much better than I had originally expected they would."

Julian said the Galaxy Buds' excellent audio quality "can be attributed to the noise cancelling feature, which can be counteracted by turning ambient sound on." Hector said his results varied depending on which music app he used, but that "Samsung's wearable app combined with the Galaxy Buds" produced the best results for him. Jeremy also found the audio lacking in volume and bass. And Jon said the only thing he wanted more of was ambient noise control, as "I would have enjoyed having more of the surrounding sound piped in through the Galaxy Wearable control app." 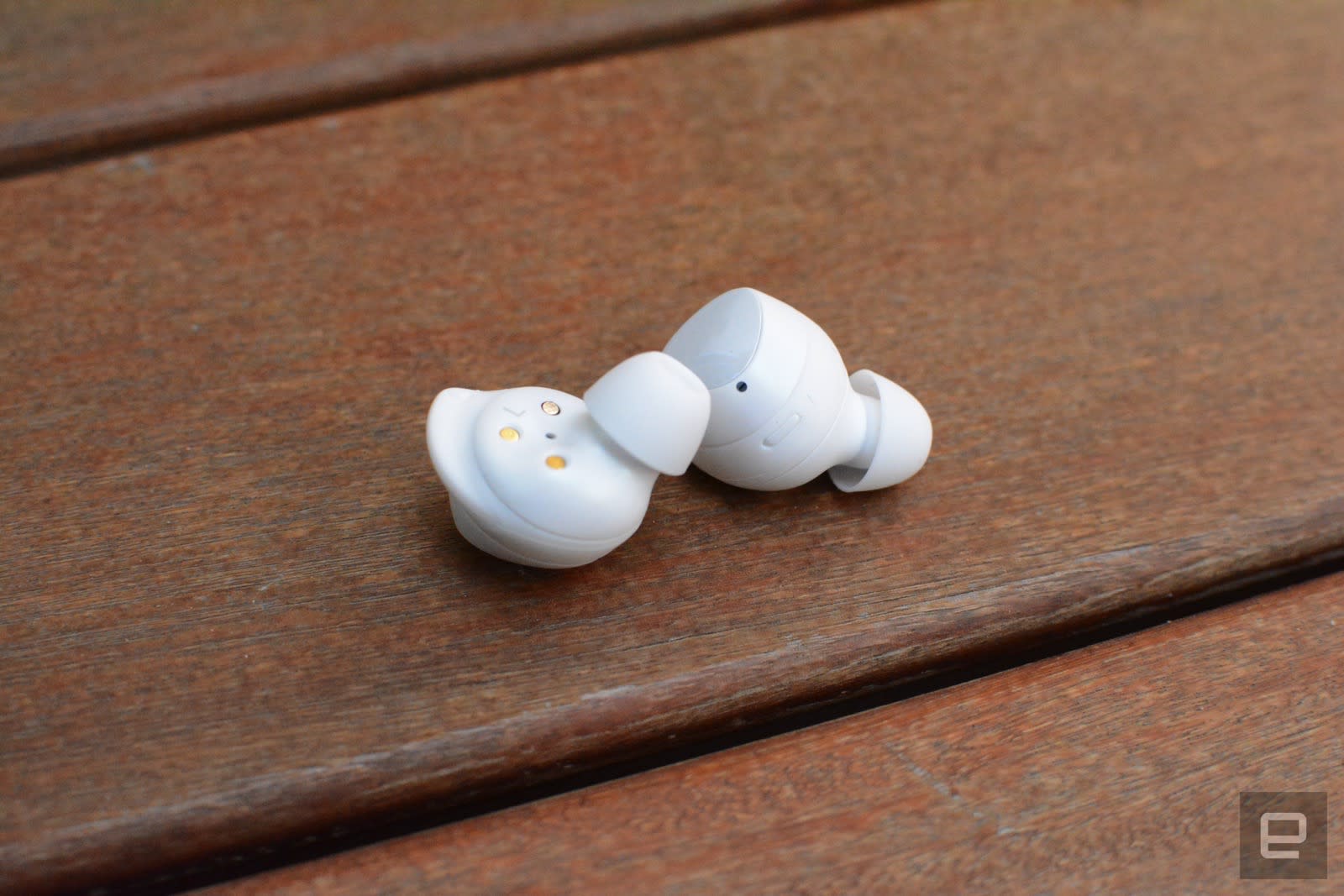 When it came to taking calls on the Galaxy Buds, results were mixed. Jon said "people have heard me talk on them and it sounds crystal clear." However, Senita found the buds to be "pretty worthless as no one can even hear me talking on them." RK rated the call quality "questionable at best."

Although Billy didn't experience any pairing or connection issues when testing the Galaxy Buds, he acknowledged that some had been reported (mostly by Pixel 3XL users). This echoed the feedback from our user reviewers: While Babydinosaur said their connection had always been stable and both Philip82c and Yielar found the earbuds easily and instantly paired with their devices, others had less satisfying results. Adam called his connection "seriously disappointing," adding you should "forget about walking around or even putting your phone in your pocket and getting good sound. If you move at all it cuts in and out to the point where you can't listen to the music." ScottPhil said Bluetooth issues are the reason he didn't rate the Galaxy Buds higher: "I wear my phone on the front of my body two feet from the Buds. If I move my hand between the phone and the Buds or bend at the waist too much I lose signal." Fidel Eladio was more succinct, saying the Bluetooth connection "is garbage." 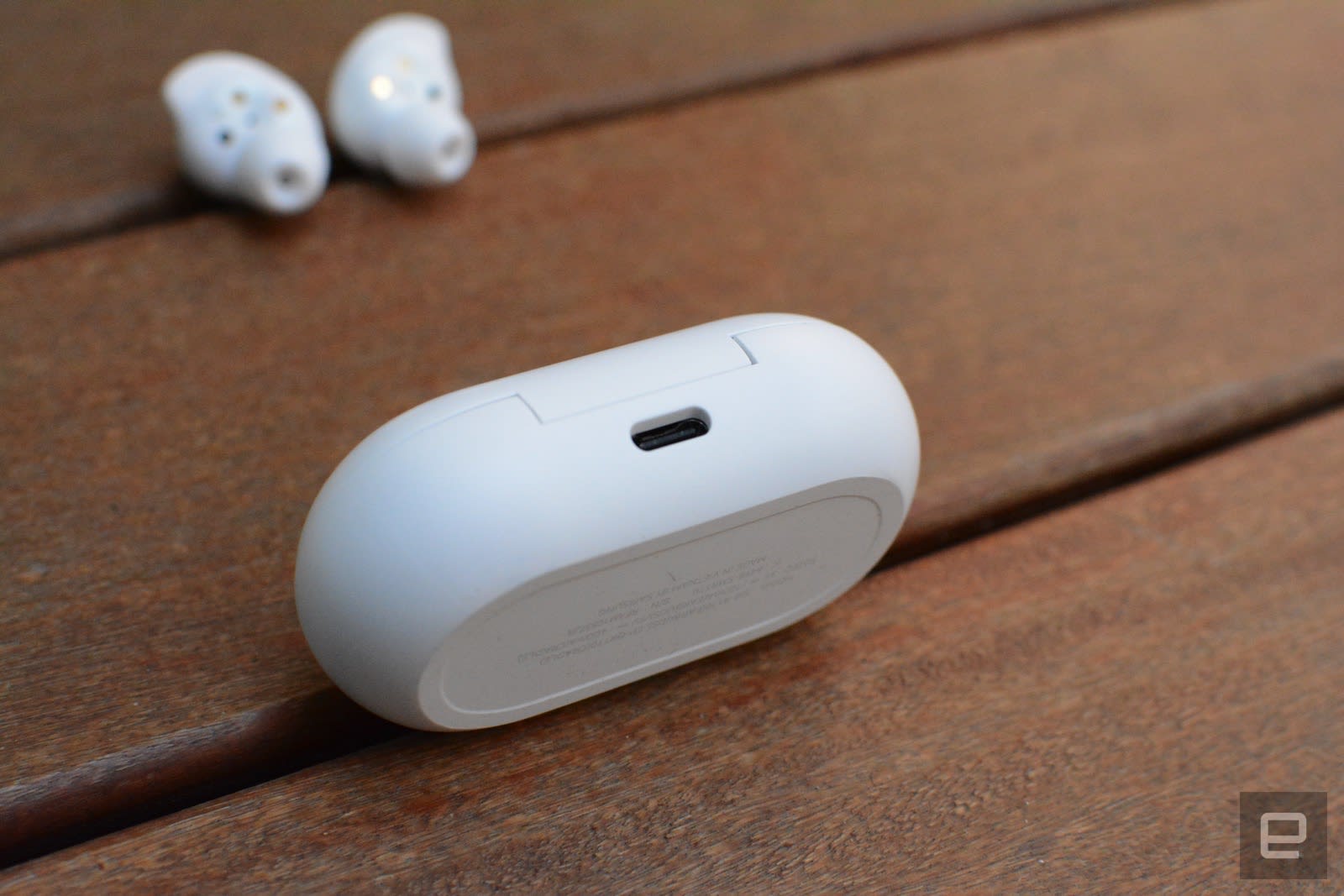 Although the Galaxy Buds were clearly intended to compete with Apple's Airpods, they don't work well within the competitor's ecosystem. But when compared to other wireless options, most of our users were pleasantly surprised. Keyana was thrilled at the improvements made in the Buds from Samsung's previous IconX earbuds. LordRahl72, who previously used Ultimate Ears TripleFi headphones, was impressed by how close the Galaxy Buds came to the sound quality of the pricier pair. Philip82c found the Galaxy Buds superior to the Jabra Elite Sport buds in fit while wearing a motorcycle helmet, as well as in connectivity and battery life. Only b4ur2old dissented, saying the Galaxy Buds didn't sound as good as the wired AKG buds that came with their S10, and they would recommend the Samsung earbuds only if "you already own a Samsung phone."

While a few users had some small quibbles, the majority were happy with their purchase. Keyana said that "honestly, this year's Galaxy Buds are the very best truly wireless earbuds that I've ever owned. Excellent, excellent purchase on my part and an even better product on Samsung's." LordRahl72 said they find themselves using the buds "more often for the simple ease of use and added functionality. I would easily recommend these for anyone wanting good sounding easy fitting wireless buds without breaking the bank in the process." Justinc92 said they "love the Samsung Galaxy Buds; I use them every day all day," a sentiment that was seconded by ScottPhil who's used them daily for five months for exercise and yard work. Yielar said they're "overall very happy with the Samsung Buds and I do recommend them." Overall, Philip82c said the Galaxy Buds are a "great value and quality for the price."