With help from June, the smart oven company.

WiFi-enabled pellet grills are having a moment, and rightfully so. They allow you to control and monitor your grill from afar, which is very convenient, especially you're smoking a piece of meat for eight hours or more. Several companies have already jumped on the bandwagon, with Traeger, Rec-Tec, Green Mountain Grills and others all offering models with built-in connectivity. Until now, one of the biggest names in backyard grilling had yet to do the same: Weber. Today, the company is changing that with the introduction of its SmokeFire grills.

While the overall barrel shape is similar to other grills, there are some notable design differences with Weber's new gear. First, the outside is coated in the company's iconic porcelain enamel. The material helps prevent rust and cracking, which is a nice touch, even if you're planning to keep the grill covered when it isn't in use. It's also the same coating that wraps Weber's popular Kettle charcoal lineup and several of its other models.

Next, the pellet hopper is around back. It's a narrow channel that runs along the rear of the grill, instead of a rectangular container on one side. The company says it still holds a full bag of pellets, which typically come in 20-pound packages. Thanks to that location, Weber reduced the length of the auger, or the channel that feeds pellets to the fire pot. It also implemented a gravity-fed setup. The company says the pellet feeding system not only reduces the chances of a jam, but also expedites the pre-heating process.

Instead of a single metal sheet or solid panel that protects the fire pot from grease, Weber is using its "Flavorizer" bars from its gas grills on the SmokeFire models. The company says this design creates even heat distribution and channels grease and other liquids straight into the drip tray. It also promises that the combination of the bars and the slide-out tray make cleanup easier than other pellet grills. I use a pellet grill a few times a month, and cleaning them is a real pain, so I look forward to putting this to the test. 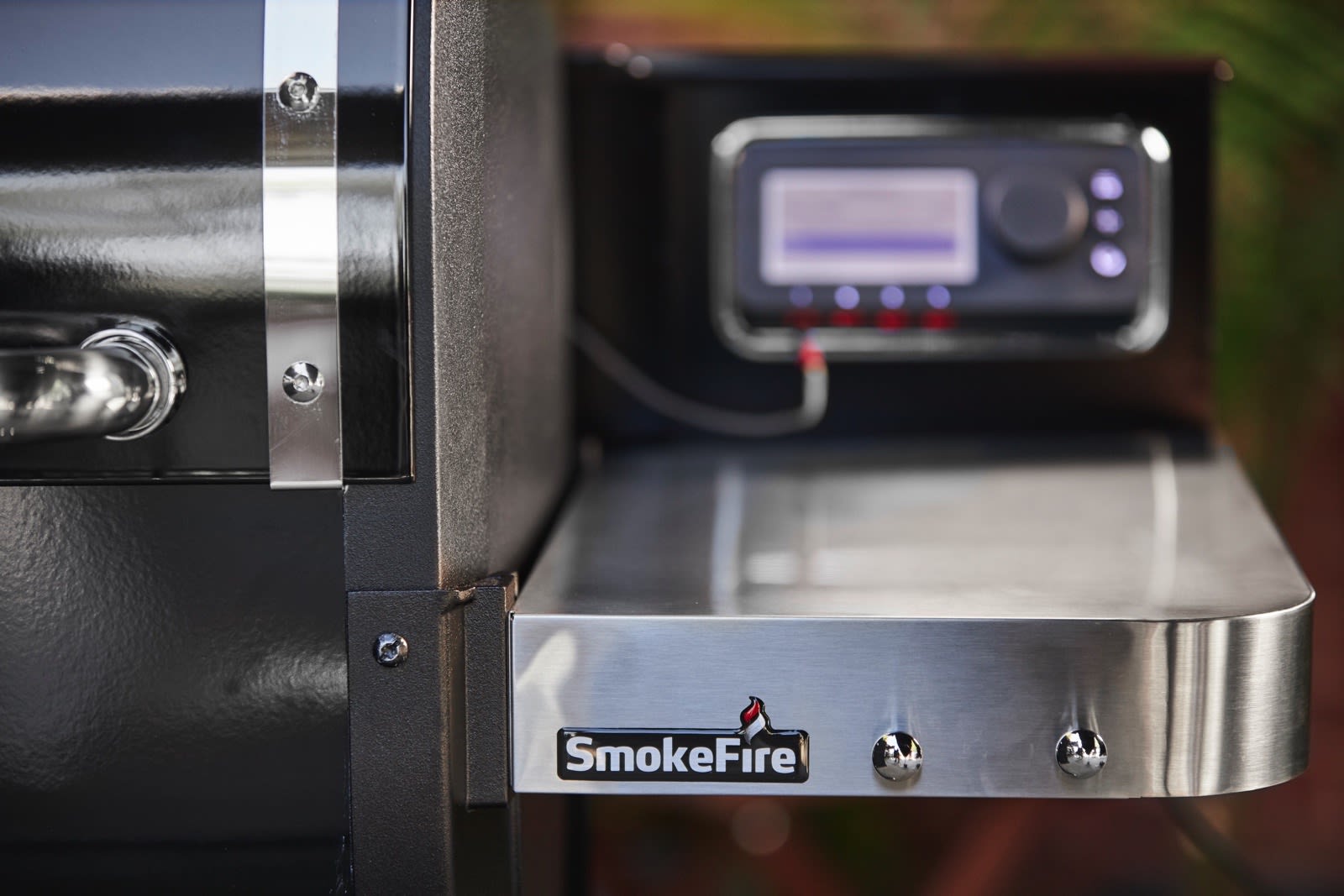 The system that powers the SmokeFire grills is called the "Responsive-Inline-Drive Engine," which Weber says "heats hot and fast." It's capable of temperatures up to 600 degrees Fahrenheit, so you can use it for low-and-slow smoking or for searing steaks over high heat. For comparison, Traeger's WiFi pellet grills offer temperatures up to 500 degrees Fahrenheit. Similar to Traeger's Super Smoke mode, Weber plans to add a Smoke Boost option that will make the pellets "smoke and smolder" at temperatures between 165 and 200 degrees. The idea is the same: a specific mode that infuses more wood smoke flavor into your food. Smoke Boost will be available to use at the beginning of a cook "shortly after launch."

These grills require an app to help you control things, and in this case it's called Weber Connect. The app also guides you through the grilling process, and it's powered by JuneOS. That's the cooking software from June, a company that makes connected smart ovens. The app walks you through things like setup and prep, in addition to sending food doneness alerts and calculating an estimated finishing time. That ETA feature predicts a time based on food temperature readings from meat probes and "integrated grill measurement systems." Weber has done the app-assisted cooking thing before with its iGrill devices, but those are Bluetooth, and they basically just monitor temperature/doneness. The SmokeFire grills also allow you to use up to four food probes at once. A lot of the competition is just equipped with one.