Expressive E brings the nuance and power of MPE to a standard keyboard format.

Expressive E isn't quite the household name that, say, Korg is. It's a small French startup with just a couple of niche musical devices under its belt. But its Touché and Touché SE are unique in the way they allow musicians to control and sculpt their sound. They're essentially expression pedals with four degrees of motion that you control with your hand. It's hard to explain, so maybe just watch this demo.

What's exciting though is that Expressive E took what it learned from the Touché and built its first standalone synthesizer: Osmose. While it looks rather unassuming and perhaps even a tad boring, it hides some powerful features inside.

The heart and soul of the Osmose is its keyboard. It's built around a proprietary technology called Augmented Keyboard Action (AKA). It is, just like the Touché, a little hard to explain in words. Essentially, the keyboard allows for the control of each individual note in three dimensions -- meaning you can not only push down on the key but also move it from side to side. This allows you to add vibrato to a note simply by shaking a key back and forth. It might not seem like a huge deal at first, but if you're coming to the keyboard from another instrument, moving your hands to create vibrato feels natural.

That's just the start of it. It can track up to 24 notes simultaneously across its 49 full-size keys. And those 24 voices can be divided up as well into layered or split modes -- meaning that either a key can trigger two sounds simultaneously or the two halves of the keyboard can play different sounds.

Each key essentially has two stages of vertical movement. Just the lightest touch can trigger a note. There's an initial zone where you control the volume of the note. Press it further and you'll engage the aftertouch. And as you can see in the demo video, you can use different levels of pressure to control not only the response of a single instrument but also trigger multiple sounds based on how you play. So a light brush on the top of the key triggers a chime while pressing down fully brings up a choir.

Importantly though, all of this feels natural. None of these changes feel awkward or poorly thought out, nor do they negatively impact the feel of the key bed. The Osmose feels solid and satisfying to play. And I was able to immediately feel my way through pitch bends on the keys.

Part of the power of this new keyboard lies in its embrace of a technology called MIDI Polyphonic Expression (MPE). MPE has been around for some time now, but it's only starting to go mainstream. And it allows for the control of multiple parameters of individual notes simultaneously. Here's a simple example: On a traditional synth or MIDI keyboard you'll find a pitch wheel. If you play a chord then move the pitch wheel, all the notes bend simultaneously. On an MPE device, each note can be bent individually.

This might sound like a minor detail, but it's a feature of many instruments -- especially stringed ones -- that can't be recreated on a traditional keyboard.

The thing is, most MPE instruments until now have been a bit alien looking. Oftentimes they're membranes like all of Roli's instruments or long, continuous touch strips like the Continuum. The Osmose is one of the few controllers out there that puts the power of MPE in a traditional keyboard format. And that's important. Many boutique instrument makers are betting big on MPE, and it's a major focus of the MIDI 2.0 standard being worked on. But major digital audio workstations (DAWs) like Ableton Live and even mainstream musicians have been slow to adopt MPE. Part of that is no doubt due to its often unfamiliar presentation.

MPE is powerful in it own right, even when stuffed into a standalone controller. (And the Osmose can be that -- it has full-size five-pin MIDI in and out ports as well as a USB port and presets for controlling external equipment.) But it really shines when an instrument is designed from the ground up with it in mind. This is where the choice of sound source comes into play.

Expressive E partnered with Haken, the makers of the Continuum, and borrowed its EaganMatrix sound engine. It was built specifically for instruments with continuous expressive control. And it gives the Osmose access to a number of different types of digital synthesis, including FM and virtual analog. But perhaps most important, it contains a physical modeling engine. A traditional keyboard simply lacks the capability to convincingly recreate the expressiveness of a string quartet or a flute. But the granular control of the Osmose allows for the introduction of convincing nuance. However, some of the sounds are definitely in uncanny valley territory. They're extremely close to the real thing but ever so slightly off. 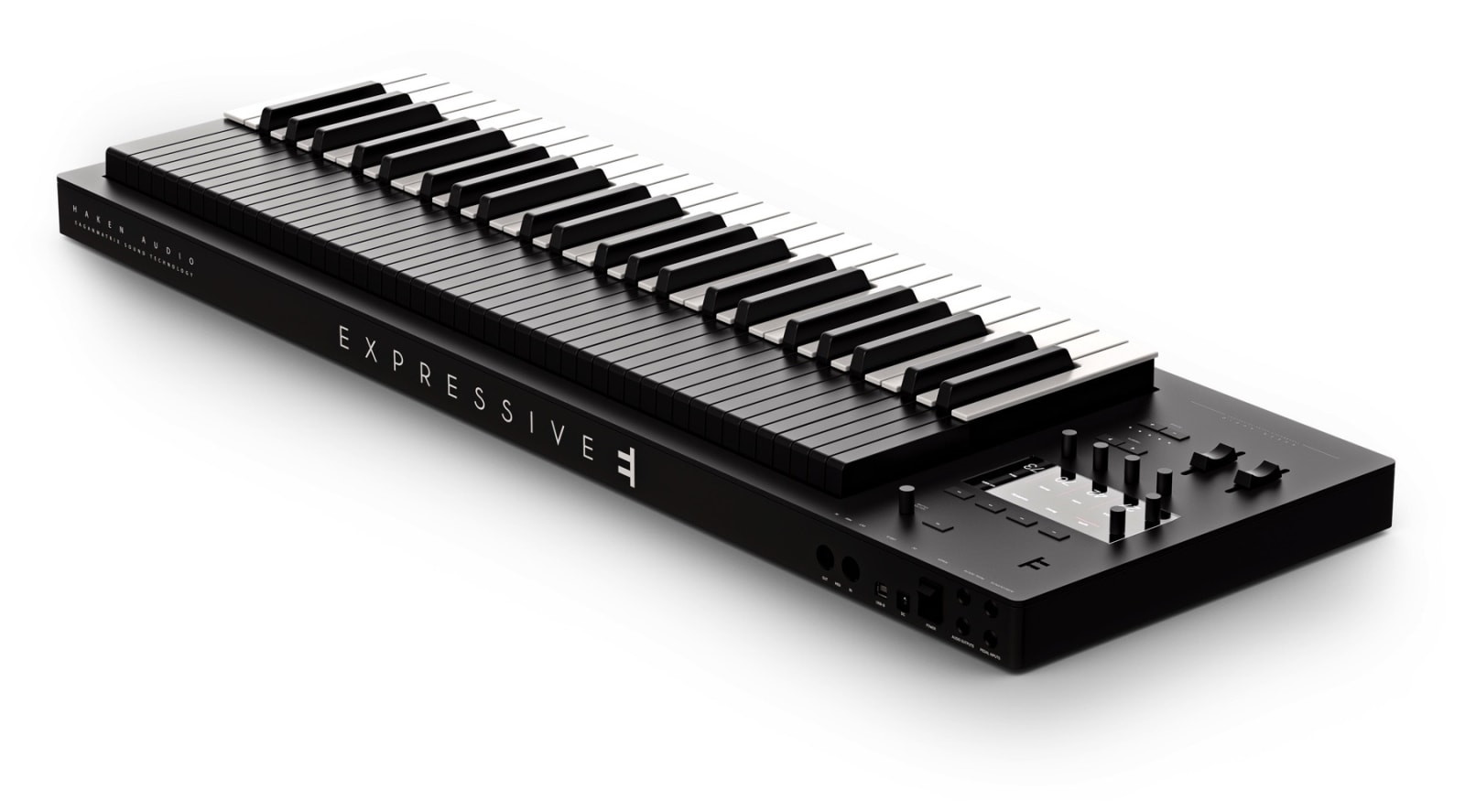 The version of the Osmose I saw wasn't final however. While the keyboard is pretty close, the UI and sound engine are still being worked on. Eventually the front panel will have eight encoders, nine buttons, a color LCD and sticks for controlling pitch and modulation on a global level. Expressive E said that the UI for editing sounds on board will be simplified somewhat to make it more manageable with those limited controls, but an app for MacOS and Windows will be available for those who want to dig deeper. And you'll have complete control over what parameters the three AKA key movements control as well as the pedal inputs, of which there are two around the back.

It's expected to ship in the summer of 2020 at a retail price of $1,799. But you can pre-order one starting today by putting down a $299 deposit. And if you put in that pre-order before December 10th (see update below), Expressive E will knock $700 off the retail price. If you're the impatient type or want to secure your discount, you can head over to the Expressive E website to place your pre-order today.

Update: The pricing scheme for Osmose pre-orders has been simplified, and instead of gradually increasing over the next few weeks, anyone who puts down the deposit before December 31st can get one for $1,079.