The old adage "jack of all trades, master of none" is generally considered a warning against trying to be or do many things. But that didn't dissuade Mercedes-Benz from giving the 2020 GLS SUV as many features as possible, including its amazing MBUX infotainment system and adaptive suspension system. While the majority of the time the vehicle will be cruising on the highway and dodging shopping carts in the parking lots of boutique shopping districts, it's also an SUV that's ready to traverse the mountains when society goes sideways.

The GLS is the automaker's luxury SUV, starting at $75,200. Sure, the official Mercedes-Benz vehicle for driving off the beaten trail is the more expensive (and sought after) G Wagon, starting at a 401(k)-draining $128,000. But it's the GLS that's the go-to vehicle for anyone who's not a recording artist with a No. 1 single or living the trust fund dream. With the recent refresh, the automaker has given it legit off-road cred, pushing it into the realm of the G Wagon without sacrificing the luxury that brings people to this SUV in the first place.

Inside the GLS, the seats envelop the driver and passengers with opulent cushiness. The ride is the typical high-end Mercedes level of sophistication. But the automaker goes a bit further by removing the jostling of the bumps and swaying of driving with a feature called Curve. Using the optional E-Active Body Control system, the vehicle reduces the lateral movement of the vehicle's body by raising the outside edge of the GLS when it goes around a curve. The feeling of your body leaning against a curve? Yeah, that's almost entirely gone. In its place is a weird bit of tranquility. It's initially odd as a driver to turn the wheel and feel the vehicle react to that action by adjusting the level of the cab, but I soon became accustomed to not feeling my body sway to the outside of a corner. 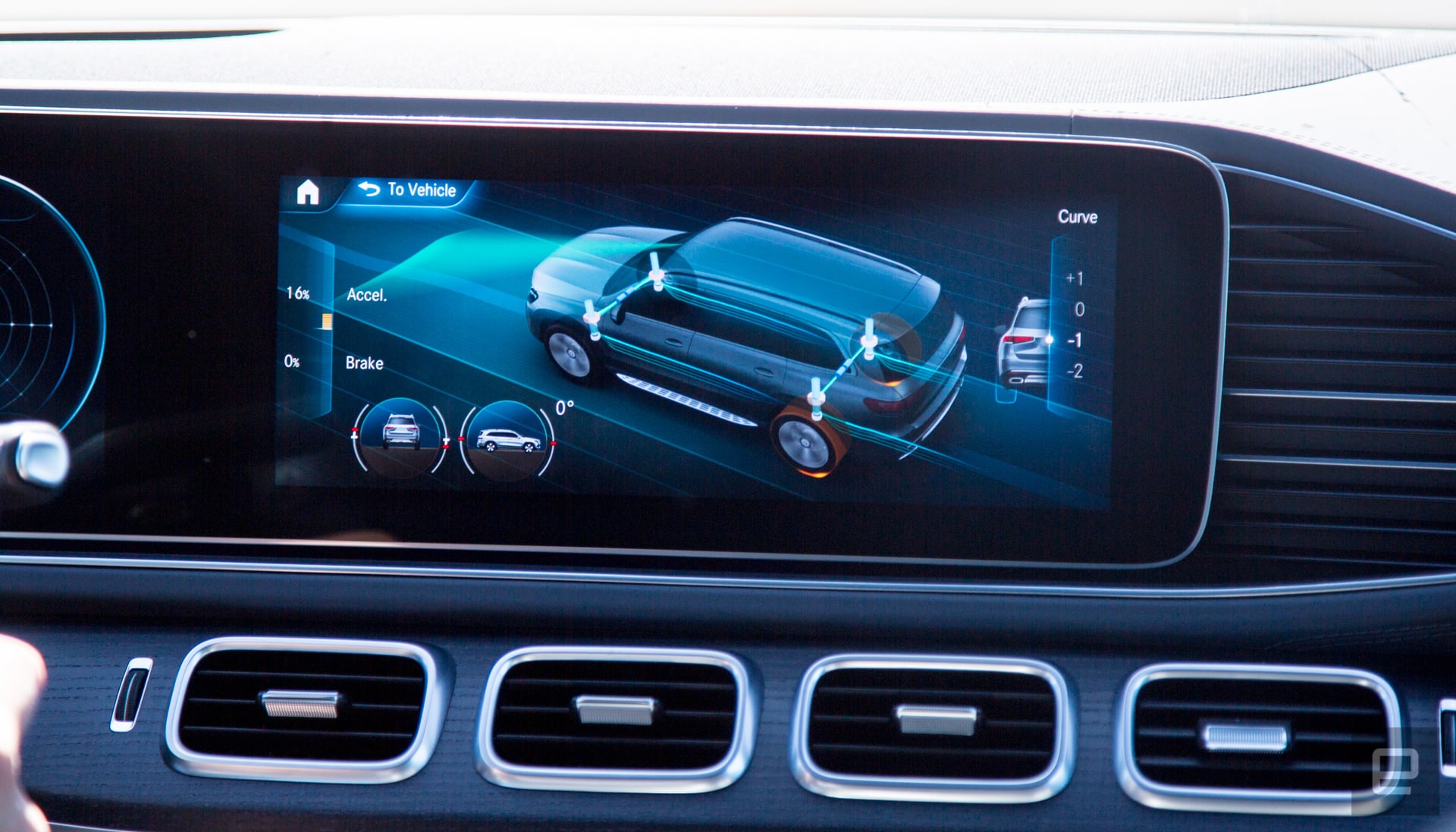 The same suspension also reduces the jarring effects of a less than ideal roadway. Using two cameras mounted to the front of the GLS, the vehicle creates a 3D map of road and primes the suspension to suck up the bumps a split second before they are rolled over or into. It seems like a bit of technological overkill just to have a vehicle that glides over the asphalt, but like Curve, I became accustomed to it, especially after purchasing a hot beverage. That's right: A car that starts on the north side of $70,000 keeps you from spilling your latte. That's a ridiculous reason to buy a car, but I'd be lying if I said I didn't appreciate it.

But its main purpose is to keep the passengers and drivers from feeling the effects of a crumbling infrastructure, and it does a wonderful job. Then Mercedes goes further than that by bestowing actual off-road capabilities to the GLS. The vehicle raises itself up and is ready to tackle 99.9 percent of what the average Mercedes-Benz customer will throw at it. There's also a feature that'll keep score of how well you drive off-road, up to 100 points. It measures your speed and the angle of the vehicle and how you tackle the wild outdoors in your very expensive SUV. The trick is to drive slowly. The bragging rights are limited to you and your family, so after a few days, you'll probably never use this again. Still, even without the weird rating system, during my tests, the GLS was a more-than-capable dirt-road companion.

On a highway with ruts and bumps, the 3.0-liter Inline-6 Turbo engine with EQ Boost (a mild hybrid system) of the GLS 450 I tested had more than enough power under the hood to help me pass slower vehicles with zero issues and quickly accelerated to match the flow of traffic from an on-ramp without overly exerting the engine, thanks to 362 horsepower and 369 pound-feet of torque.

I've driven the more powerful GLS 580 trim level with a four-liter V8 and 483 horsepower and 516 pound-feet of torque, and frankly, most people will be fine with the smaller engine. The $97,800 price of the larger power plant will probably also push more buyers to the 450. Sure power is fun, but in an SUV is it $22,000 more fun? Probably not. 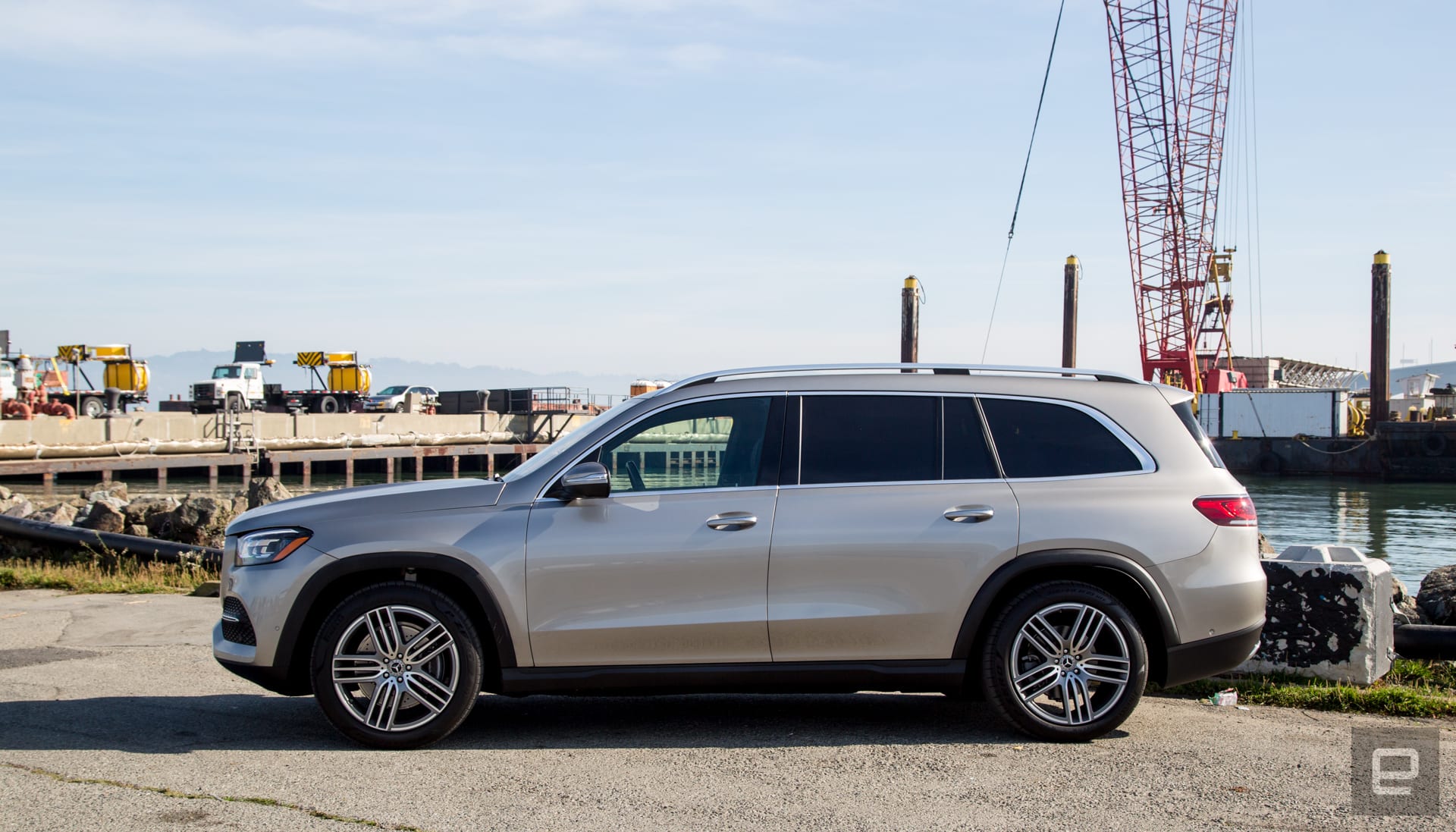 Regardless of the engine choice, the GLS comes with Mercedes' MBUX, which is still the best infotainment system on the market. A lot of that comes down to the speech-recognition system. "Hey, Mercedes" makes short work of a majority of the tasks that people do while driving like mapping, selecting media and making phone calls. If you're more of a hands-on-type person, the system can be navigated with either the touch-enabled control wheel in the center console or the tiny touchpad on the steering wheel.

I'm also a big fan of the system's augmented reality turn-by-turn directions. As you come upon a turn, the 12.3-inch center display shows the road with an arrow pointing exactly where you need to turn. It's overkill most of the time but outstanding in circumstances where it's not clear where you should be going.

All this fanciness will cost you. The GLS starts at $75,200, but like all luxury vehicles, that price can quickly skyrocket. For example, the E-Active Body Control feature clocks in at a whopping $6,500. Suspension technology ain't cheap. For a well-equipped 450 model, expect to push the price up near and potentially more than $90,000. Also, the exterior styling feels a bit boring. It's not bad, it's just not that exciting.

Overall though, the GLS raises the bar in the luxury SUV world. If you do happen to need a large vehicle with a third row that can tackle a bumpy dirt road on the way to a fancy shindig while keeping everyone from spilling their piping-hot cup of coffee, the GLS is the tech-heavy SUV to get.