You can also purchase the software outright if subscriptions aren't your thing.
J. Turi|12.04.19
@jonturi

Serato has made its name as one of the top digital DJ platforms available and I've also become fond of its recent Studio software which offers music production tools that are easily approachable. In fact, we've recommended both products in our holiday gift guide this year. If you've been considering either, the company just launched some updates to Studio that sweeten the pot.

With Serato Studio 1.4 there's a reduced monthly subscription fee of $10 per month (down from $15). But now there's also the option to buy the software outright for $200, which includes all the perks associated with the subscription. That is, at least until version 2.0 arrives further down the line. Even then you can keep using the current version on its own or pay an upgrade fee instead of a new license to keep the updates flowing (price TBD). More importantly, Studio 1.4 now has a new audio tracks interface, giving you the ability to import and edit complete songs (or acapellas), rather than just limited-length samples. This finally opens up the possibility of making quick and easy edits, mash-ups and remixes of tracks for your next DJ set.

The core layout of Serato Studio remains the same, but you get to choose between the beat-making or DJ edit environment when you launch the application. Your library and track layout are always found at the bottom regardless, and are easily toggled from side to side. The beat-making and new audio track layouts occupy the top section of the screen and these toggle vertically depending on which track layer you're on. Overall, it's a pretty fluid way to navigate through the sections on a single screen. 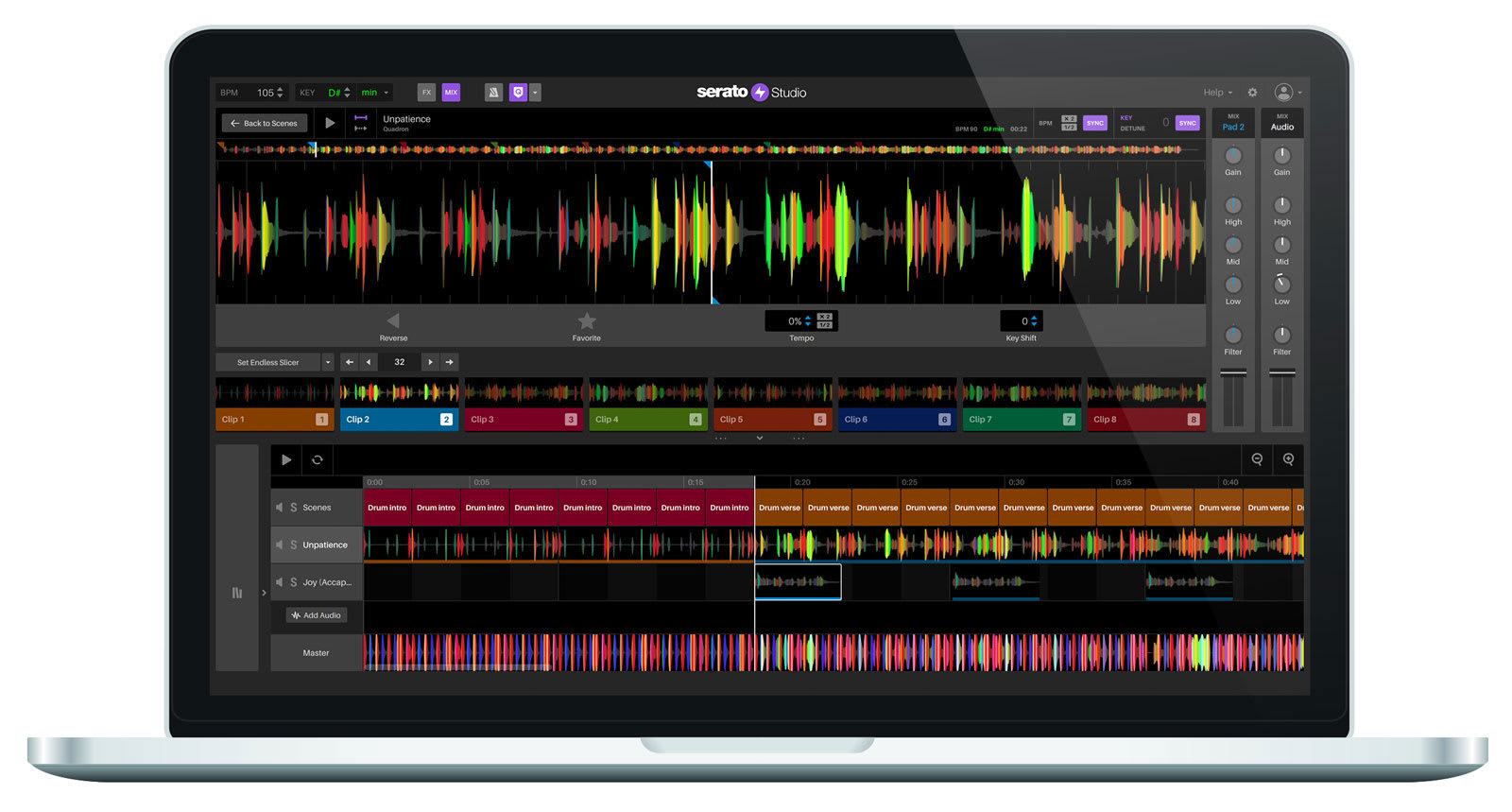 You can import songs from your library via drag-and-drop, but unlike before, you can add the entire tune to your song layout. If the tracks are, say, an old disco tune that doesn't lock to a consistent beat grid, you can fix that with a little tweaking. You can also change the key or tempo for those tracks with some interesting results.

The audio tracks editor includes a slicer that chops up your audio file into equal clips of up to 64 measures long, similar to Studio's scenes although those max out at 8 measures each. You can also use the endless slicer to create segments that span from a clip's starting point through to the end of the track as a single chunk. Additionally, you can drag your cursor to manually reduce a clip instance's length in the track layout. All these features make it easy to do simple edits like changing the intro or removing portions of a track that don't work in your set. This new flexibility in Serato Studio begins to narrow the gap between it and fully functioning DAW apps, but more importantly becomes an incredible DJ edit tool.

There are plenty of little updates scattered throughout, including a dedicated solo button right next to the mute feature for each instrument or track layer. Cue points will also be placed on the first down beat for tracks, saving you the extra effort if that's what you prefer.

Serato Studio 1.4 is available to download now for the $10 monthly subscription or outright purchase for $200. If you've already used up your trial on the previous version of Studio, have no fear, all trials have been reset so you can hop in for an additional 14-day test run of this new version with full audio track capability.