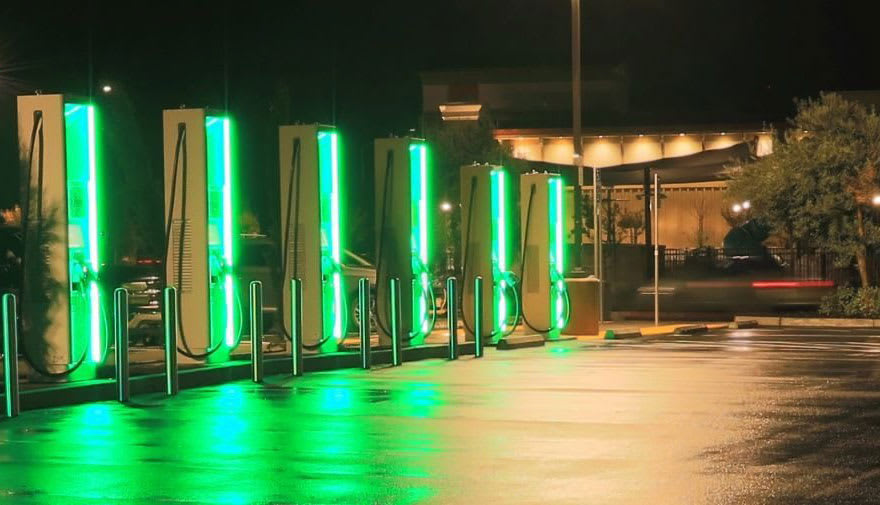 Volkswagen-backed Electrify America has been busy building up an infrastructure of 150kW and 350kW-capable electric vehicle charging sites, even before there are any production cars on the road to use them. However, now it has had to take most of them offline at the advice of Huber+Suhner, the supplier of its charging cables. According to Electrify America CEO Giovanni Palazzo "Out of an abundance of caution, Electrify America is shutting down all of our stations that use the HUBER+SUHNER high-powered cables until we can confirm that they can be operated safely. We are confident that HUBER+SUHNER will investigate and resolve this issue as quickly as possible."

The problem is in the liquid-cooled cables and described as a "safety issue" however the company was not specific about what it is. Fortunately, owners of current EVs shouldn't see much impact, since production cars capable of the faster charging (like Porsche's Taycan or the Audi E-Tron) aren't on the road yet, and some cars aren't capable of connecting to these chargers.

Electrify America came about as a part of VW's settlement over the "Dieselgate" scandal, and besides high-powered charging, it also seeks to simplify billing, with "Plug&Charge" tech that recognizes an owners account just by plugging the car in. All of its high-powered chargers that aren't impacted by the cable issue will stay open, as well as 50kW, CHAdeMO and L2 chargers. For a full list of the Electrify America stations that are still open, check the press release here (PDF).

Source: Electrify America (PDF)
Coverage: CNET Roadshow, Electrek
In this article: electricvehicle, electrifa, electrifyamerica, ev, fastcharging, gear, transportation
All products recommended by Engadget are selected by our editorial team, independent of our parent company. Some of our stories include affiliate links. If you buy something through one of these links, we may earn an affiliate commission.