There's a lot to like here, but Samsung needs to explain a few things.
C. Velazco|01.06.20
@chrisvelazco

We're at that weird point in the week where CES simultaneously has and hasn't started, and it's already becoming clear Samsung isn't sticking to business as usual in 2020. That's partially due to the hype surrounding its curious Neon project, but also because Samsung just revealed two modest versions of its most popular smartphones. The Galaxy S10 Lite and Note 10 Lite are exactly what their names suggest, and while I'm always in favor of phone makers crafting high-powered devices that don't cost a ton, Samsung is being surprisingly tight-lipped about them. That said, we did learn a few things after a bit of Vegas hands-on time.

For one, they have plenty in common. Both devices, for instance, pack 6.7-inch Super AMOLED Infinity-O displays, which in Samsung-speak means "they have hole-punch camera cutouts." Both of those screens run at 2,400x1,080, and are as easy on the eyes as you'd expect from Samsung, arguably the best smartphone display makers in the business. Both run Android 10 out of the box, both come with either 6GB or 8GB of RAM, both have in-display fingerprint sensors and 128GB of internal storage and 4,500mAh batteries. You get where I'm going with this.

Obviously, though, these phones aren't carbon copies of each other. The Note 10 Lite has a standard headphone jack and (obviously) an S Pen. While both phones have triple cameras around back, the Note 10 also arguably gets the better end of the deal -- it packs a 12MP wide camera with dual pixel autofocus, OIS and an f/1.7 aperture, along with a 12MP, f/2.2 ultra-wide and another 12MP f/2.4 telephoto camera. That doesn't just mean it feels more like a traditional, premium Samsung phone; I'd argue that also means it's much more flexible. The S10 Lite, by contrast, has a 48MP main camera, the same ultra-wide, and a 5MP macro camera. Ask yourself: When's the last time needed to shoot a macro photo? 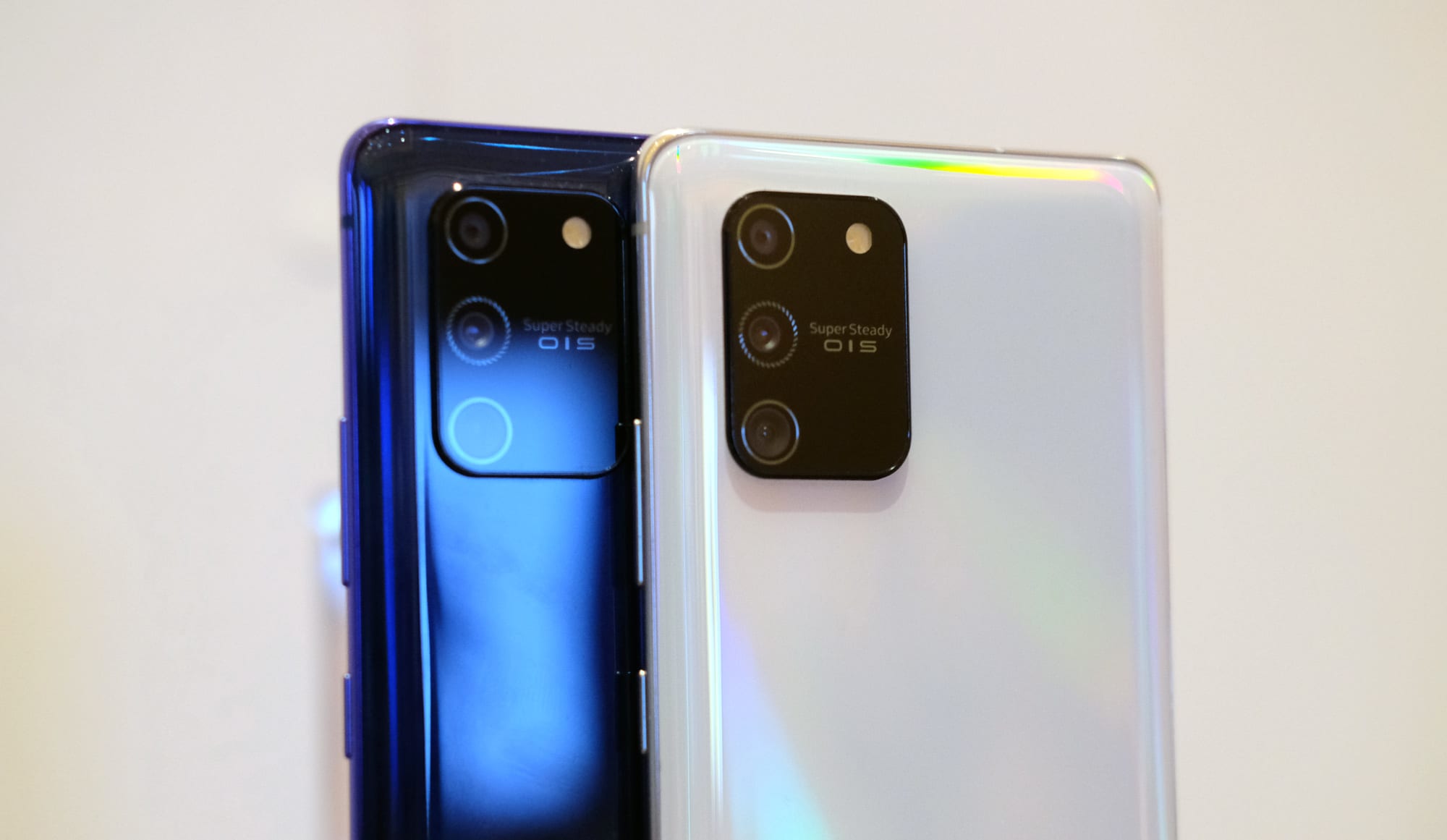 Oh, and while the Note 10 Lite we played with used an octa-core Exynos chipset, the S10 Lite actually just contained a Snapdragon 855. If I were a betting man, I might take that to mean the S10 Lite will be the only model to wind up in the US, but Samsung wouldn't say much on the matter.

Another lesson learned today: The compromises Samsung had to make here don't feel as dramatic as you might think. Both of these devices feel flagship-fast, and while the Note 10 Lite has the nicer camera setup, the S10 Lite's cameras certainly aren't stinkers. And while neither of these screens are as pixel-dense as the high-end versions launched last year, I honestly don't have much to complain about. Colors looked a little off to me at first, but that was mostly because I don't use Samsung phones' default color mode. Look a little closer, though, and Samsung's changes become more apparent.

Going into this, I just sort of assumed the Note 10 Lite would use the regular Note 10's S Pen, but that's not actually true -- this version of the stylus doesn't seem to have a gyroscope, so you can't use some of the magic-wand-y Air Actions Samsung introduced last year. That's far from ideal, sure, but I honestly stopped using those Harry Potter gestures pretty quickly anyway. For people new to the Note experience, this won't feel like a big loss. Not when writing on the Note 10 Lite's spacious screen feels as good as it always did.

So, yeah, there's quite a bit to like about both of these phones. If nothing else, they're clear attempts on Samsung's part to make sure people who can't afford to spend thousands on smartphones benefit from modern performance. Even so, I can't say I love how many lingering questions surround these things. For example: I can't tell you whether either of them are good deals because Samsung hasn't told us how much they cost. They haven't even really ballparked a number to us. (Granted, they're bound to vary a bit as these things go on sale around the world.)

Without those crucial numbers, it's hard to get a sense of how these devices fit into Samsung's line-up. The S10 Lite is especially tricky in this way -- Samsung already has a cheap version of the Galaxy S10 called the S10e, which I reviewed last year and mostly loved. Is that phone still going to represent floor for Samsung's swath of premium devices. Or will Samsung give up on the E-series and focus on these Lite models from now on. Your guess is as good as ours. For now, we'll just have to wait until Samsung starts selling these devices -- another mystery! -- before we render our verdicts.