It can be used in dumplings, baos and more.

Last year, Impossible Foods made headlines at CES when it introduced a new formulation of its Impossible Burger. It tasted so close to the real deal that we even gave it a Best of CES award. Now, Impossible Foods is back again at the annual tech event to introduce its latest product: Impossible Pork.

To be clear, this is a different product from the Impossible Sausage that was announced last year. "Sausage is a specific application of meat," said David Lee, Impossible Foods CFO, to Engadget. "Impossible Pork, however, is one that can be used in any [ground pork] application." While sausage might be good as a breakfast patty or a pizza topping, said Lee, Impossible Pork is a more general imitation pork product that would be good for dishes like baos or dumplings.

I tasted some samples of Impossible Pork prepared as a patty (seared, glazed and baked) in a banh mi and stuffed in steamed siu mai. Both dishes were not just delicious, but the key ingredient also tasted surprisingly close to real pork. The siu mai was juicy just like it should be, and the banh mi patty had a supple springy texture and savory mouthfeel that almost tricked me into thinking it had come from a pig. Much like the Impossible Burger, however, there was still that telltale chew that told my carnivorous taste buds that it wasn't real meat. But when paired with spicy Sriracha, crunchy pickled carrots or fragrant ginger, the fact that it wasn't real pork didn't bother me in the slightest. 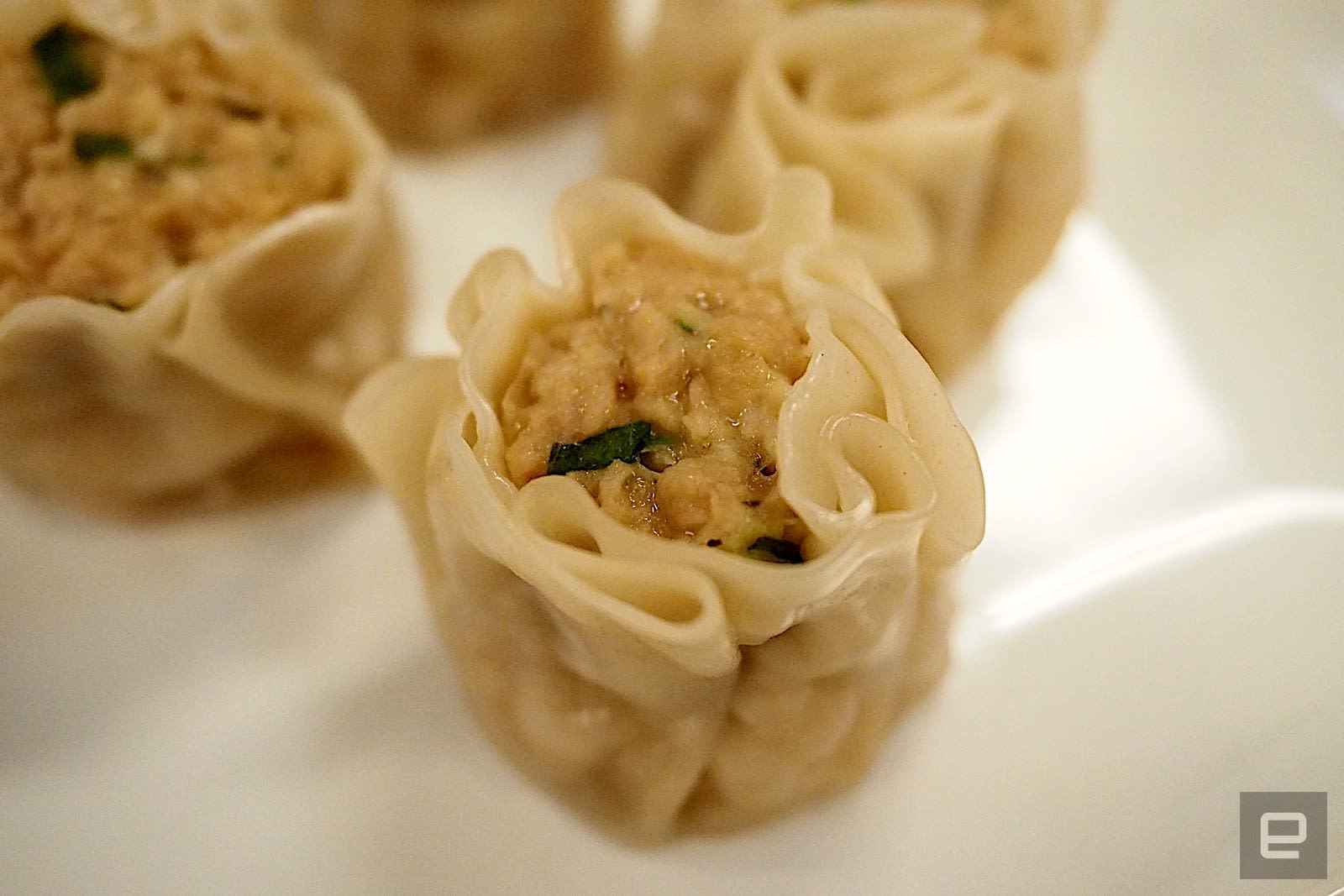 When developing the formula for Impossible Pork, the scientists at Impossible Foods looked for key characteristics that set pork apart from beef. "Pork has a much more neutral flavor profile than beef," said Celeste Holz-Schietinger, the company's director of research. Pork is often used in recipes with other strong, aromatic components like ginger and chilis, for example, so it needs to be fairly plain. In contrast, she said, beef has a more intense, browned and caramelized flavor.

Texture is a big deal too. "Ground pork is a little more crumbly," she said. "It's springier, bouncier. The way it breaks down in your mouth is not the same as beef." Another attribute is how it coats the mouth. "There's a specific fattiness to pork. It has both a textural mouthfeel as well as a unique flavor."

Despite these differences though, the underlying platform uses the same technology as the company's ground beef product. "We have simple nutrients; amino acids, sugars and fats that react with the molecule 'heme'," said Holz-Schietinger. 'Heme' is another word for soy leghemoglobin, which Impossible says is key to that meat-like flavor in all of its products. 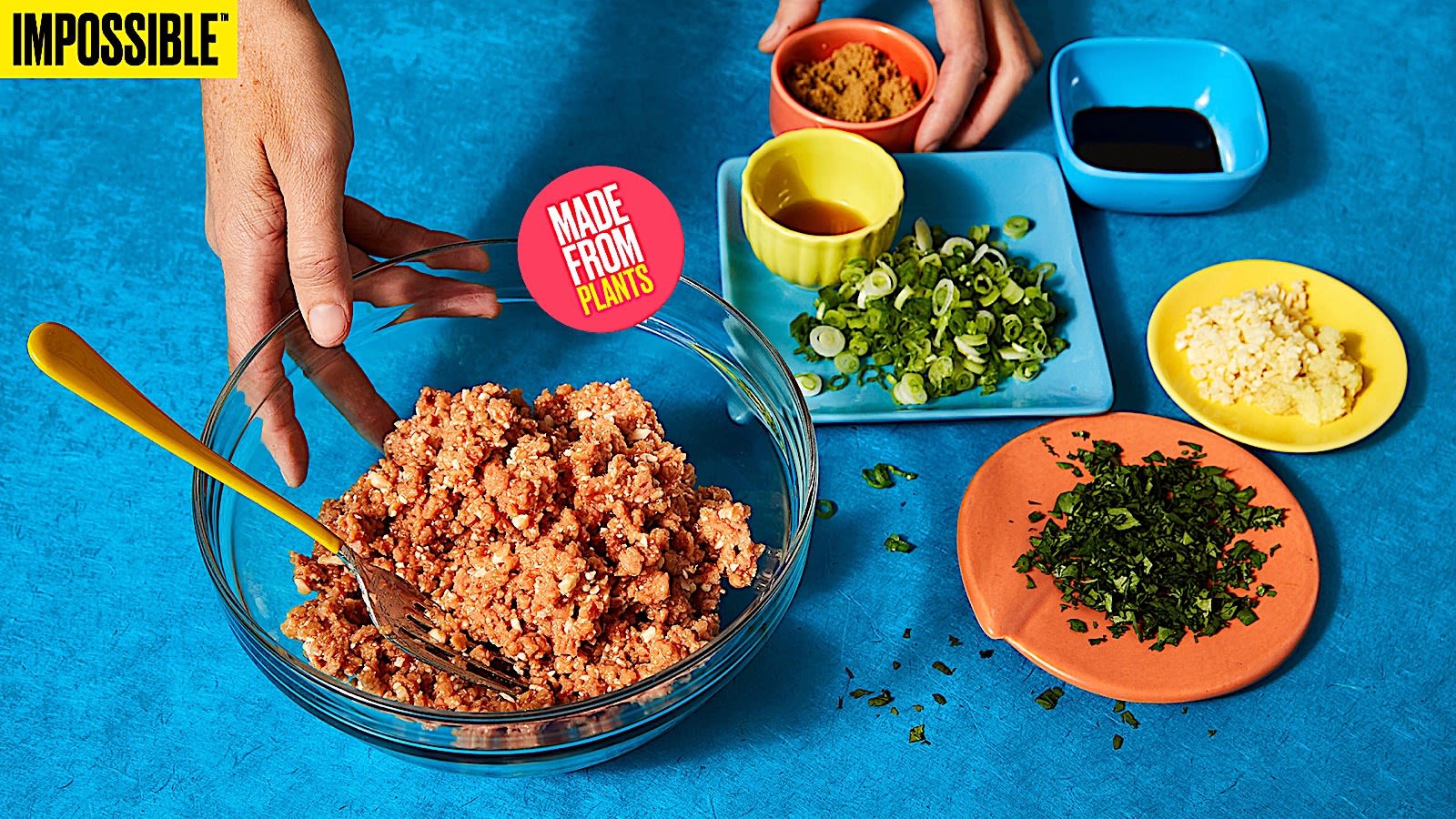 Another key aspect is the visual. When I saw the "raw" product at first, it certainly tricked me into thinking it was ground pork. "With real pork, you can grind it in different ways, with different percentages of fat," said Holz-Schietinger. "[Impossible Pork] represents a coarser grind, as our research shows this is what people prefer."

Of course, it's also crucial that the faux meat can be prepared and treated the same way as the real thing. Nathan Foot, an R&D chef at Impossible, said that he doesn't treat it any differently than he would with actual ground pork. That's an important note, as ground pork is not interchangeable with beef in many recipes. Rachel Konrad, Impossible's Chief Communications Officer, notes that in Asia, for example, pork is often used as a flavoring or a garnish, rather than as a central component of the plate (think dandan noodles or mapo tofu). "It can't be gamey or overpowering or in your face like beef is," she said to Engadget. 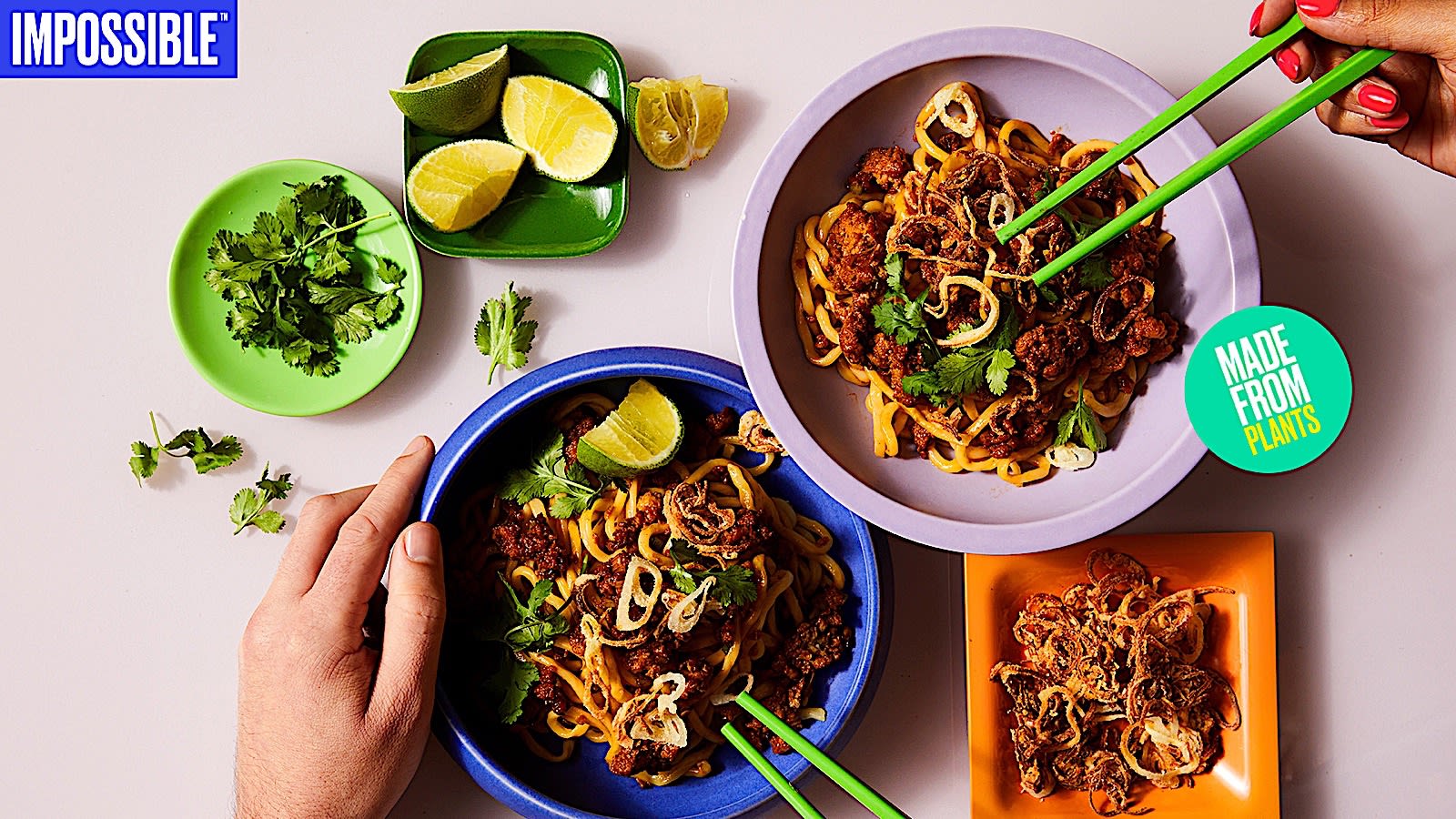 Konrad brings this up because one of the main reasons behind the development of Impossible Pork is that Asia, and China specifically, is a particularly large consumer of pork (it's increased by 140 percent since 1990). The company has already expanded quite a bit in the region -- its burger product is used in restaurants in Singapore, Shanghai and Macau -- but it's looking for an even larger presence in 2020 and beyond. One of the key ways to do that is, of course, to make a faux pork product.

That's not the only reason, according to Impossible, as there are environmental and health factors too. Pigs are not as bad for the planet as cows, but Konrad said that the goal of Impossible is to provide the flavors, textures and sensory experience of all kinds of meat using plants in order to remove the negative aspects of animal agriculture. In fact, the underlying food platform could also potentially be used to replicate chicken and fish, though Impossible has nothing to announce there yet.

As for why Impossible is back at CES, it's because the company thinks of itself as more than just a food company. "We want to blow up the whole fiction that food is somehow not technology," said Konrad. "It's science. It's technology. It's the ultimate marriage of nature and science. Food is the most important tech of our lives."

All products recommended by Engadget are selected by our editorial team, independent of our parent company. Some of our stories include affiliate links. If you buy something through one of these links, we may earn an affiliate commission. All prices are correct at the time of publishing.
View All Comments
Impossible Foods' faux pork is just as convincing as its fake beef