Are two screens really more useful than one? Ehhh.

It wouldn't be CES if Lenovo didn't have a bevy of new laptops to announce, but I can't say we saw the company's new ThinkBook Plus coming. It's available with a 13.3-inch matte, full HD IPS display, one USB-C Gen 2 port, a pair of full-size USBs and an HDMI-out. And since this isn't a one-size-fits-all sort of machine, you can configure it with up to a 10th-gen Intel Core i7 processor, either 8GB or 16GB of RAM and 256GB or 512GB of onboard storage. (Sorry, folks, no discrete graphics here.)

What makes the ThinkBook so strange, though, is the 10.8-inch, touch-sensitive E-Ink display Lenovo wedged into the back of the screen.

This isn't the first time we've seen Lenovo dabble in these displays -- it used an E-Ink panel in place of a traditional keyboard for its Yoga Book C930 not too long ago. Its approach this time is a little less ambitious, but Lenovo hopes this oddball addition will be enough to make its customers just a little more productive before even opening up their computers. Need to see what's next on your daily agenda? Or to quickly triage those emails that just landed in your inbox? You can do both from that external screen, but it's worth noting you can't actually edit calendar appointments or respond to emails there.

You can, however, use a stylus to doodle or take down important messages in OneNote. A little caution would be advisable, however: While I liked how responsive those stylus strokes were and how it felt as I dragged it across the screen's glass, the button on the barrel that toggles the eraser is pretty easy to hold down accidentally. (Hopefully, that gets fixed before this thing goes on sale.)

Beyond that, a bevy of built-in far-field microphones means the ThinkBook also sort of doubles as a monochrome Echo Show. It's a neat idea in theory, tempered somewhat by the fact that you have to launch Alexa on that E-Ink screen before you can start talking to it. This early demo model didn't offer the same sort of audio feedback Alexa users are used to either, though Lenovo says the final retail version should talk back to you just fine.

If you really -- and I mean really -- wanted to, you could also use that E-Ink screen to plow through books in your Kindle library. To be clear, you're not meant to hold the laptop in both hands the way you would one of Amazon's tablets; it doesn't support auto-rotation. Frankly, a little software customization would've gone a long way here. 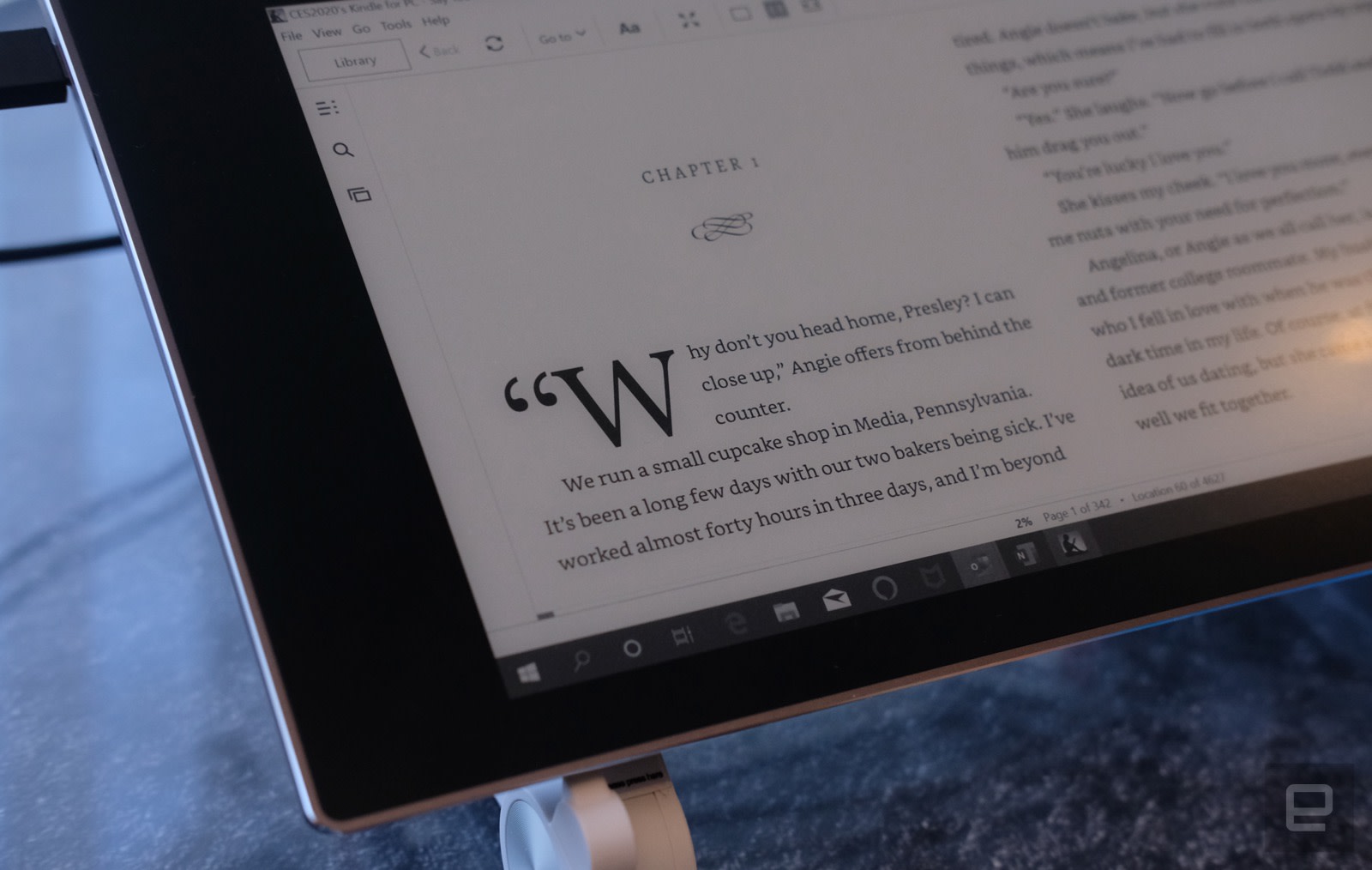 As it stands, tapping the Kindle icon on that external screen simply launches the standard Windows Kindle app, and there doesn't appear to be a way to tweak things so that a tap on the side of a page flips the book to the next one. It's fine if all you plan to do is click through a couple of pages, but I couldn't imagine getting through a whole book like this. And since this is, by Lenovo's admission, a computer meant for business customers, it's even harder to imagine that its target audience would even bother.

If some of these features sound a little... shall we say, half-baked, well, you're not wrong. For what it's worth, Lenovo doesn't really imagine people shelling out north of a thousand dollars for a laptop because of this additional display. Instead, it's more of a bonus. If people figure out ways to improve their workflows because of it, great! If not, well, they still have a perfectly fine PC with a reasonable price tag.

Beyond that, the ThinkBook Plus is just one of those delightfully weird machines that so often appear at CES. At best, it's an example of blue-sky thinking that could lead Lenovo to rethink what its computers should be capable of. And at worst? Well, it'll be a pretty good conversation starter at that upcoming chamber of commerce meeting.

All products recommended by Engadget are selected by our editorial team, independent of our parent company. Some of our stories include affiliate links. If you buy something through one of these links, we may earn an affiliate commission. All prices are correct at the time of publishing.
Lenovo's ThinkBook Plus is a laptop that doubles as a Kindle
ces2020
e ink
eink
gear
hands-on
kindle
lenovo
personal computing
personalcomputing
thinkbook
thinkbook plus
video