Inside the making of the world's first ready-for-sale laptop with a bending screen.

It's been more than seven months since I first laid eyes on Lenovo's foldable tablet PC prototype, and the company is now ready to launch the world's first laptop with a folding screen. The device also finally has a name -- the ThinkPad X1 Fold -- and Lenovo walked us through the painstaking process of putting such a tricky machine together. But first, we got some time with the new folding tablet to get a taste of the experiences it can offer.

At its core, the ThinkPad X1 Fold is a 13.3-inch screen surrounded by a bezel that's chunky compared to modern tablets and laptops. But that's understandable, given the amount of tech Lenovo had to squeeze into the device. The Fold bends inwards and the two halves of the display lie almost flat upon each other, snapping shut magnetically. This leaves a small gap between them unless you sandwich in the "Bluetooth Mini Fold keyboard" that Lenovo designed to fit into that gap.

This keyboard is one of the accessories we hadn't seen when Lenovo first teased the Fold, and it makes a big difference. With it, you can basically turn the tablet into a mini laptop, laying a real keyboard with physical keys on the bottom half to bang out quick emails and messages. I preferred using this to the onscreen keyboard, but because of its small size, the typing layout was different from what I'm used to on a full-size deck.

The buttons themselves were responsive, clicky and had decent depth, but things like quote marks weren't where you'd normally find them. And while I appreciate that Lenovo took care to include a trackpad below the space bar, this tiny surface isn't good for getting much precise navigation done.

The Fold wirelessly charges the keyboard when it's nestled between the screens and the whole setup is snapped shut, so you don't have to worry about plugging in the accessory. It's still far from being a perfect mini laptop for lengthy typing sessions, but for now, this feels like a reasonable solution for people like me who want to type on physical buttons.

Of course, if you unfold the ThinkPad and prop it up on your desk with the built-in kickstand, you can connect a superior Bluetooth keyboard and mouse to multitask as hard as you want. The USB-C ports on either side of the machine also make it convenient to hook up an external monitor. The Fold will come with the latest Intel Core processors with Hybrid Technology, and it'll run Windows 10 Pro. Lenovo said it will make a version with Microsoft's Windows 10 X system for multi- and dual-screen devices once that's available.

For now, though, the company integrated mode-switching software to let you more easily use the Fold in various configurations. The shortcut to access this lives in the system's indicator tray on the bottom-right of the screen. When you're holding the device in landscape orientation, tapping this button lets you choose between full screen or splitting the display between two apps. If you hold up the Fold vertically, a third option appears to pull up an onscreen keyboard across the lower portion of the display. 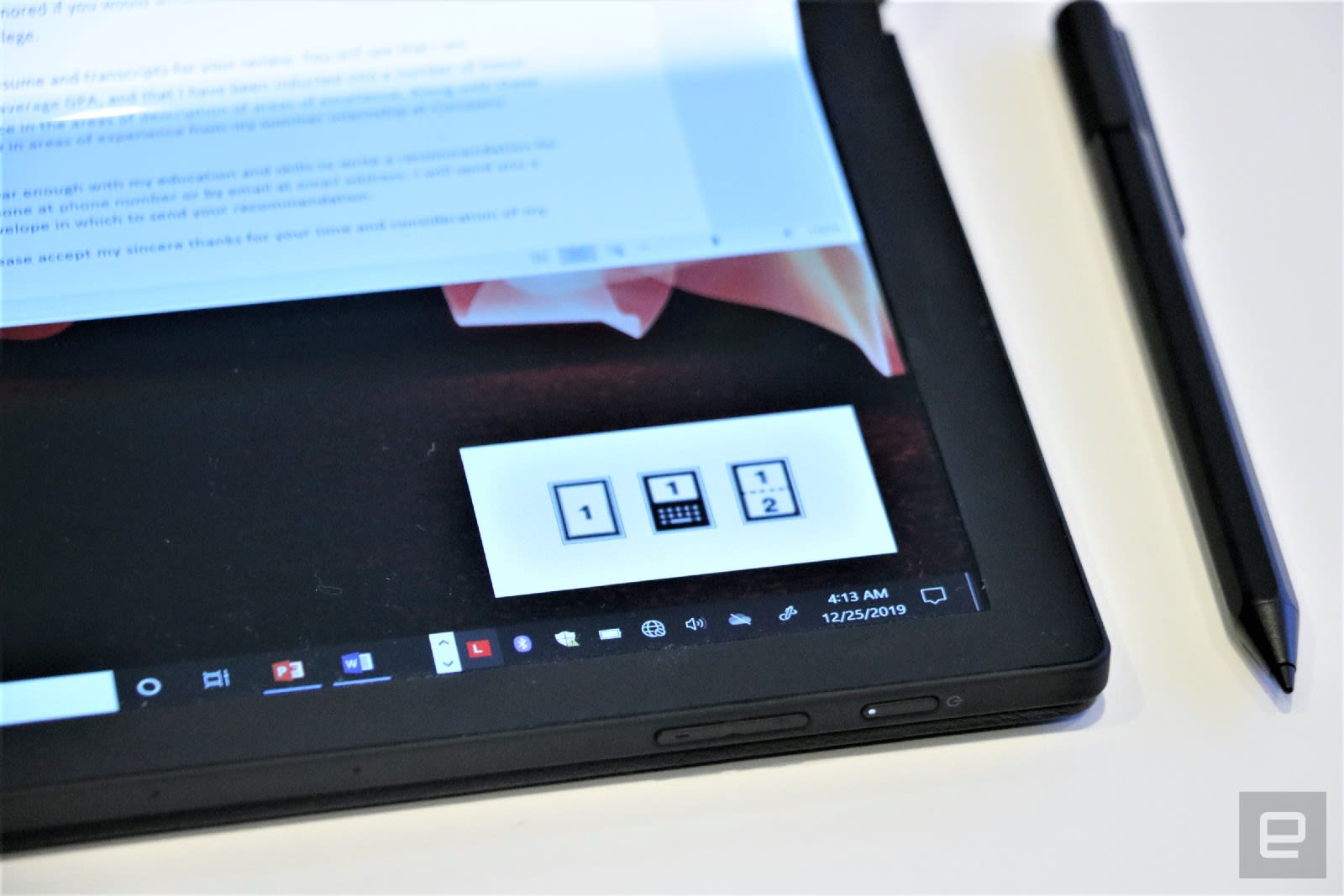 As we already saw when we checked out the prototype in May, the Fold is wrapped in a leather cover that articulates along with the device as it opens and shuts. When closed, the whole thing feels like a large Moleskine notebook, complete with subtle red accents. That similarity is intentional -- Lenovo also wants you to think of the Fold as a book you can hold with one hand and read or write on with a stylus. Weighing less than 2.2 pounds, the device isn't ideal for prolonged use with just one arm, but it was still light enough for me to single-handedly maneuver.

Speaking of maneuvering, one of the most pressing concerns over folding screens is durability. While the company could only say in May that issues relating to the hinge, protection and screen durability "have all been addressed," spokespeople were now able to clarify to Engadget how the Fold was engineered to prevent damage. Two interlocking carbon fiber plates sit below the screen to make sure the LG Display plastic OLED is protected. Some 12 to 13 layers of parts sit on top of each other within the device, including a fan, heat sink, motherboard, speakers, battery and more.

Another crucial component of the ThinkPad X1 Fold is its hinge, which has to allow for both the screen and the external case to bend in tandem. It moves along two fulcrums: one on the inside and one on the circumference. There are no gaps on the device despite the moving parts, and there is a corrugated duct tape-like material wrapping around the bend. It prevents ingress of detritus that could get inside the Fold and break things, but it also makes the machine look unfinished. 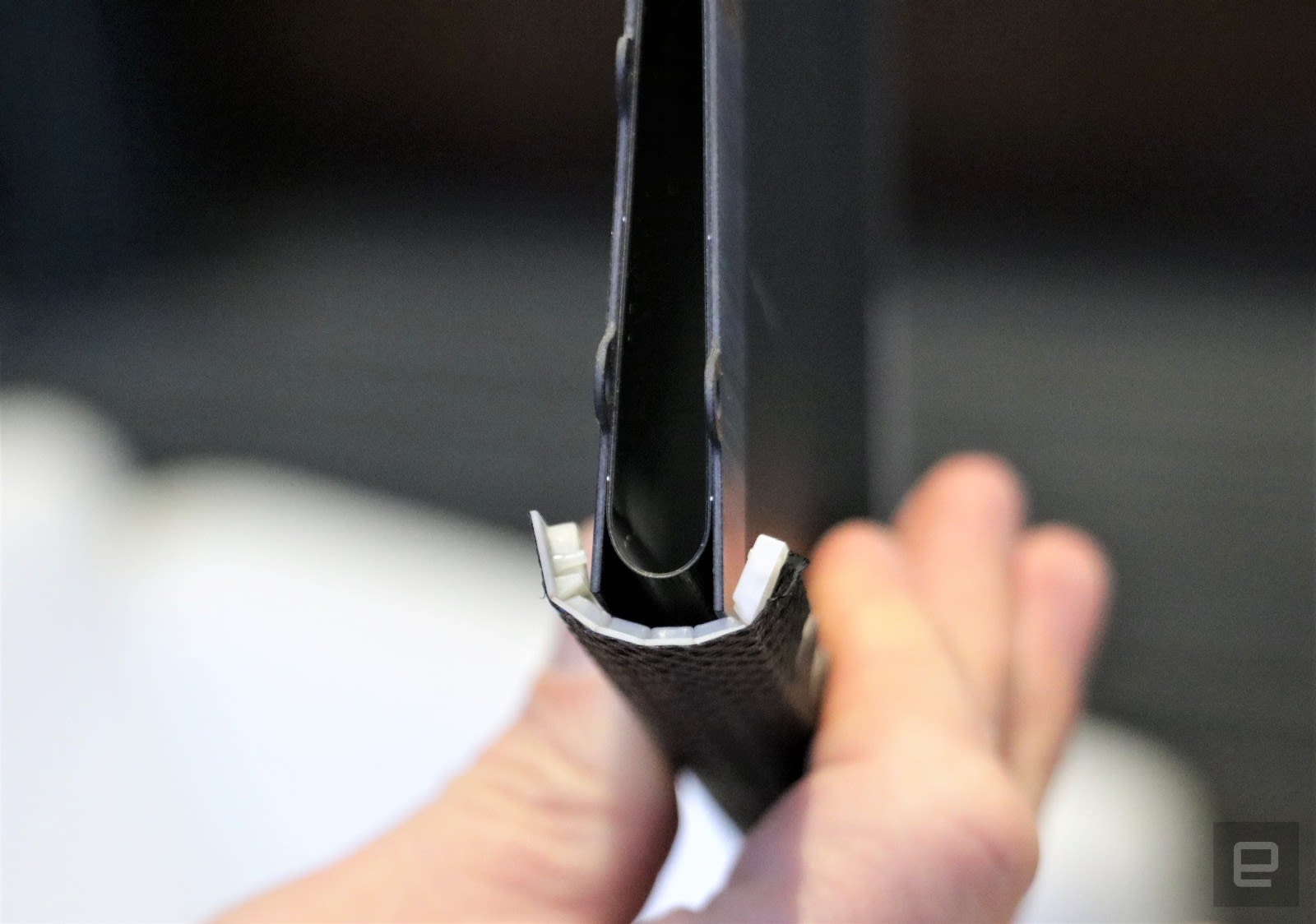 Still, as we saw from Samsung's Galaxy Fold fiasco, perhaps it's more important to make a device that holds up under daily use than something that looks polished. Given the mess that happened with that foldable phone, did Lenovo learn anything from Samsung's broken Fold fiasco? Company reps told Engadget that it has been working on the ThinkPad X1 Fold for four years and that Samsung's news didn't prompt them to go back to the drawing board.

The Thinkpad X1 Fold will cost $2,499 when it arrives in the middle of this year, though Lenovo isn't including any of the aforementioned accessories at that price. You'll have to shell out more for the keyboard, the pen and the stand, and prices for those have yet to be confirmed. The company is also planning on making a 5G-ready version in the second half of the year. Being first to market with the Fold gives Lenovo a head start, but I wouldn't be surprised if other PC makers wow us with similar devices soon enough.