The guy at CES who just wants to talk premature ejaculation

Morari might have the only perineum wearable at the show.

Jeff Bennett keeps referring to "P.E." As in, some 30 percent of men have been afflicted with P.E; the causes of P.E. are not exactly known; P.E. is defined by a male orgasm within a minute of penetration. Just to be clear, he's talking about premature ejaculation.

But Bennett's company, Morari, thinks there's a solution. It involves electrodes. He's at CES to promote the technology, even if it draws the occasional snicker. And even if he has to resort to euphemisms. "We want to be seen as leaders in male sexual health," he said.

Bennett was awake by 3:30am on Sunday in Minneapolis. But by the afternoon he was set up with quesadillas and tortilla chips for a stream of meetings in the corner of Mexican restaurant Border Grill at Las Vegas' Mandalay Bay.

First, a product development team from Shenzhen -- shaved head, leather jacket and eyebrow piercing on one guy, track pants and a striped sweater on the other. Industrial design is a not-insignificant challenge for Morari. One of the issues solved so far: an adhesive that doesn't rip hair. Other crucial problems: How to turn off the device when you're done delaying an orgasm? Should the gadget be disposable or reusable? The project manager delivers detailed monologues on battery form factor and manufacturing chains in China.

Bennett has an early-stage prototype. It's a perineum patch, a wearable for the taint. About the size of a large band aid, it's packed with a small battery, electrodes and a Bluetooth connection. Mild electrical pulses, currently used in pain relief, "confuse" the user's nerves and delay a male orgasm, he says. (It's essentially a small, wireless transdermal electric neuromodulation -- or TENS -- unit.) And it works, Bennett assures. He tested the latest prototype two nights ago.

Next, a French reporter from the business press. Bennett gives the pitch he'll repeat dozens of times before the night is up. On top of the 30 percent of men who've suffered from P.E., another 30 percent might wish to delay an orgasm -- think of the market possibilities. Like Viagra, this could be used recreationally, too. Yet while "E.D." is freely discussed, "P.E." is still taboo. "It hasn't been appreciated in terms of how big of a problem it is," he tells her. The guacamole slowly browns. 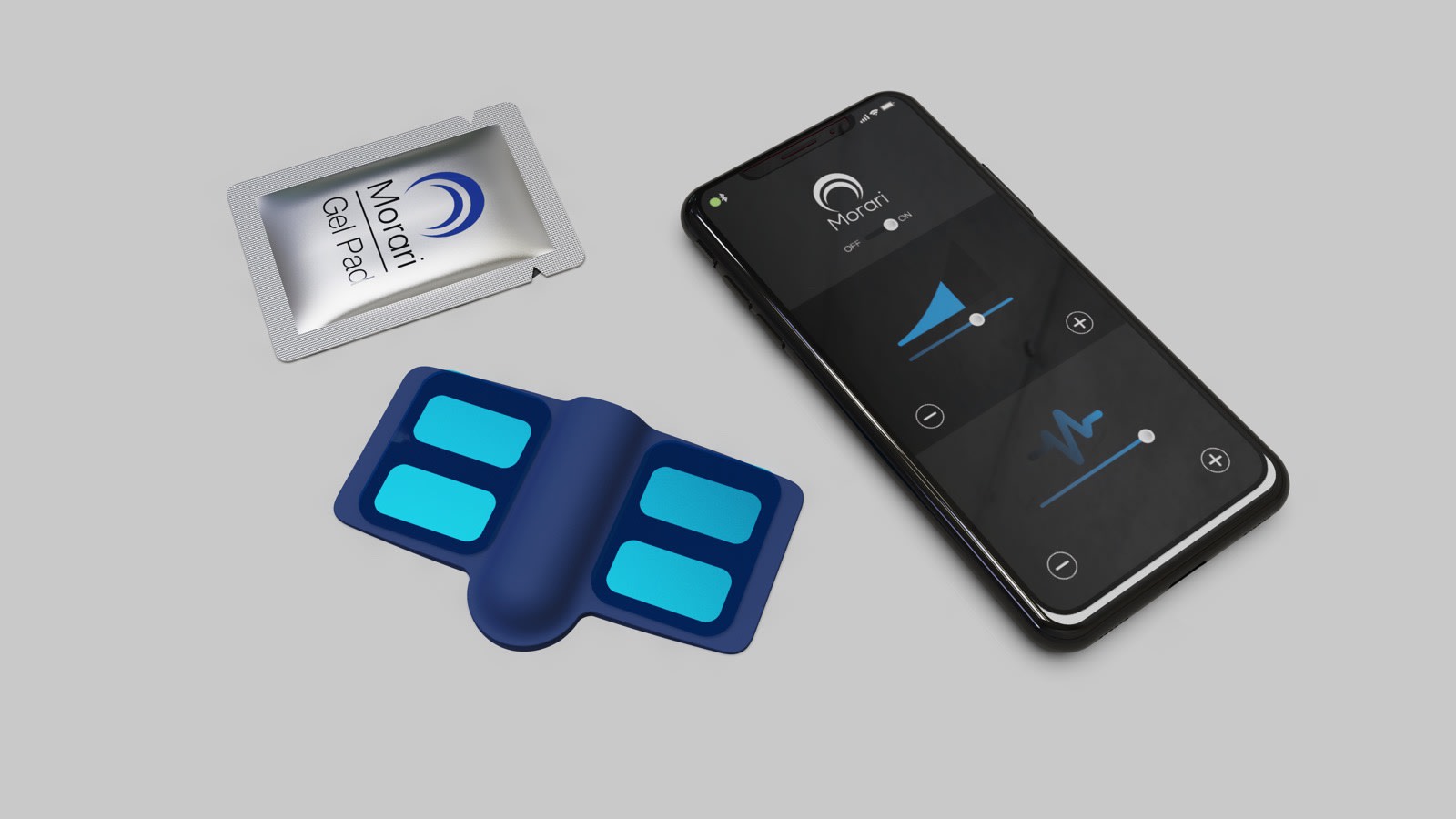 Morari renderings of the wearable, replaceable adhesives and accompanying app

There was some debate within Morari's three-person team about whether they should exhibit at CES for the first time, an endeavor for which they've budgeted $35,000. But this is perhaps Morari's single chance. This year, the CTA officially allowed sex tech companies at the show but only as a one year trial. One of the more unusual companies to emerge among the smart sex toys is Morari.

The sex toy company whose award rescinding (and later reinstatement) at last year's CES precipitated the whole rule change -- and made them flag-bearers for sex positivity at the trade show -- is Lora DiCarlo. Bennett met a delegation from the company to get tips on how to exhibit sex tech at CES. The advice was passionate.

"Own the conversation around it," said Lora DiCarlo's publicist. The idea, she says, is that airing male shame over premature ejaculation will force them to question why it's embarrassing in the first place. Which is an inevitable path to deconstructing gendered power structures and toxic masculinity. Power and shame are two sides of the same coin, she tells them. "This could move the needle in society," she said.

Bennett is less woke warrior than experienced marketer of medical devices. Pacemakers, lasers, ultrasound imaging -- that sort of thing. After working at Medtronic he went to Boston Scientific. There, he ended up working in urology, which planted the seeds of his idea for Morari. He's an even-keeled mid-Westerner -- neither corny salesman nor bashful about the the human body -- with graying hair and dad clothes. He can repeat the same sales speech all day long without flagging. 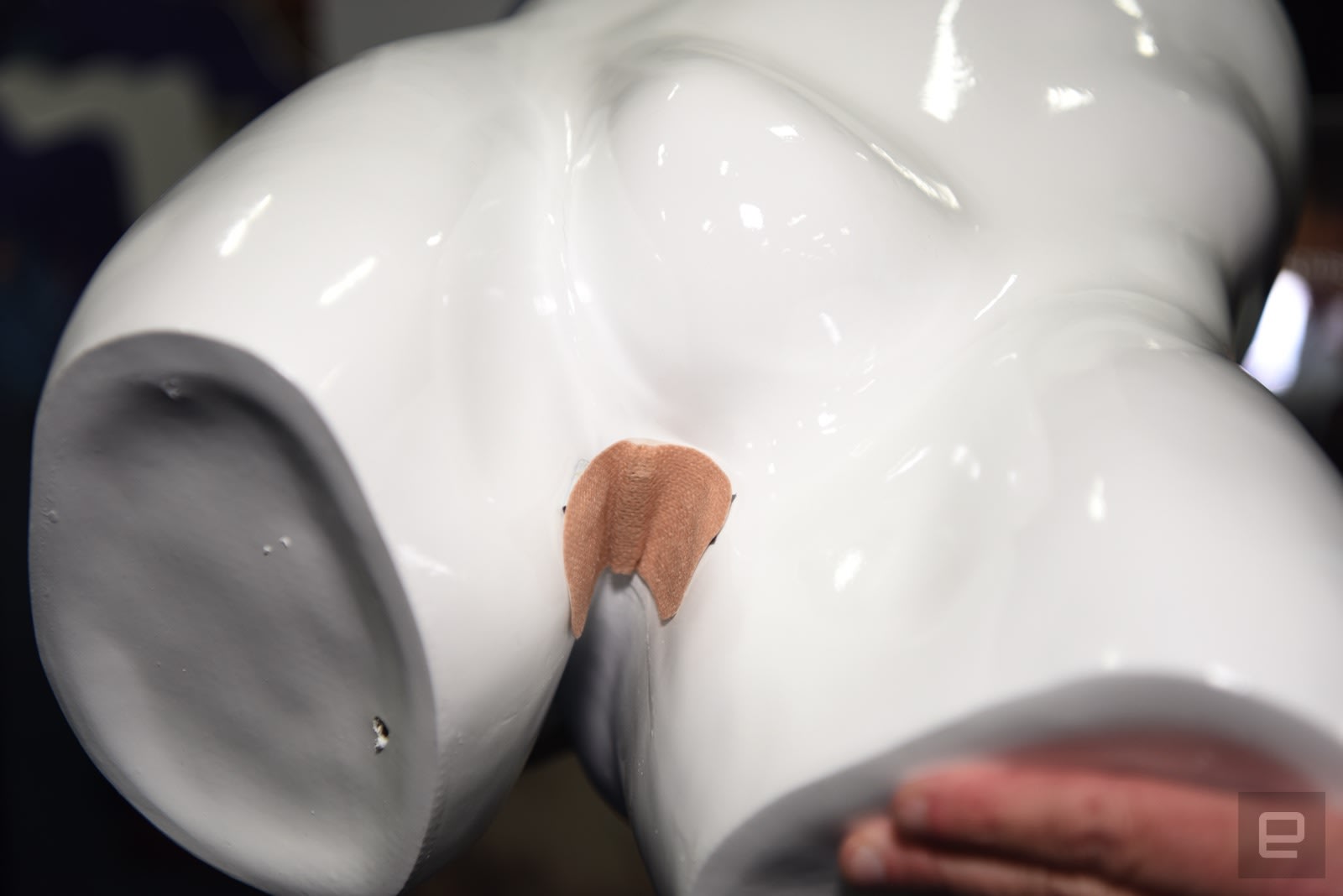 Perhaps Morari could be more than a medical device. But at CES Unveiled, its narrow display wasn't trying to make a splash. A looping laptop presentation of premature ejaculation facts with stock images of sad-looking men, the crotch of a plastic mannequin with the patch attached, a sign saying "restoring confidence in men's sexual health."

But some people get it. Several hours into the show, Bennett gets in conversation with a man who already uses TENS devices for his back and knee pain. He never thought the same gizmo could apply to his penis. "I'm surprised some college kids haven't come up with this goofing around," he said. They exchange details and Bennett tells him to see their full booth at Eureka Park -- CES' startup section -- once the show properly opens. "Come on by and we can give you a demonstration!" Bennett said. A beat passes. "On your arm."

All products recommended by Engadget are selected by our editorial team, independent of our parent company. Some of our stories include affiliate links. If you buy something through one of these links, we may earn an affiliate commission. All prices are correct at the time of publishing.
View All Comments
The guy at CES who just wants to talk premature ejaculation
ces2020
gear
jeff bennett
longread
medicine
morari
sex
tomorrow