I had a blast hammering its large arcade buttons.

When I first heard about the BeatBox, I was skeptical. A build-it-yourself drum machine made from cardboard? Wouldn't that disintegrate within half an hour? Finger-tapping isn't as violent as, say, regular drumming with wooden sticks, but when you're in the zone you still tend to hit the buttons with melodic oomph. (At least, that's what I tend to do.) After a few seconds with the crowdfunded instrument, though, those fears evaporated. I'm no musical expert, but it's clear the BeatBox has been thoughtfully designed and can take a chunk of performative punishment.

First and perhaps most importantly, the BeatBox is a construction kit. The company says it takes about an hour to rig up up the various components, which include 16 30mm arcade buttons, eight 24mm function buttons, four parameter control knobs that also function as buttons, and a multi-purpose joystick that lets you navigate the BeatBox app and control an X-Y effector. There's also a rechargeable 3000 mAh battery, two 50-watt speakers, and a bunch of cords that connect to a Teensy 3.6 board.

I didn't have the chance to build a BeatBox at CES 2020 (unfortunately, I didn't have a full hour to spare, and the company would have needed thousands of un-assembled Beatboxes to keep up with demand on the show floor). The company had a teardown attached to the back wall of its booth, though, and I asked Rhythmo founder Ethan Jin to open the lid of a unit he was playing with. The former music teacher happily obliged, pointing out the different components and some inner walls that give the cardboard shell some extra support. I was impressed, to put it mildly. 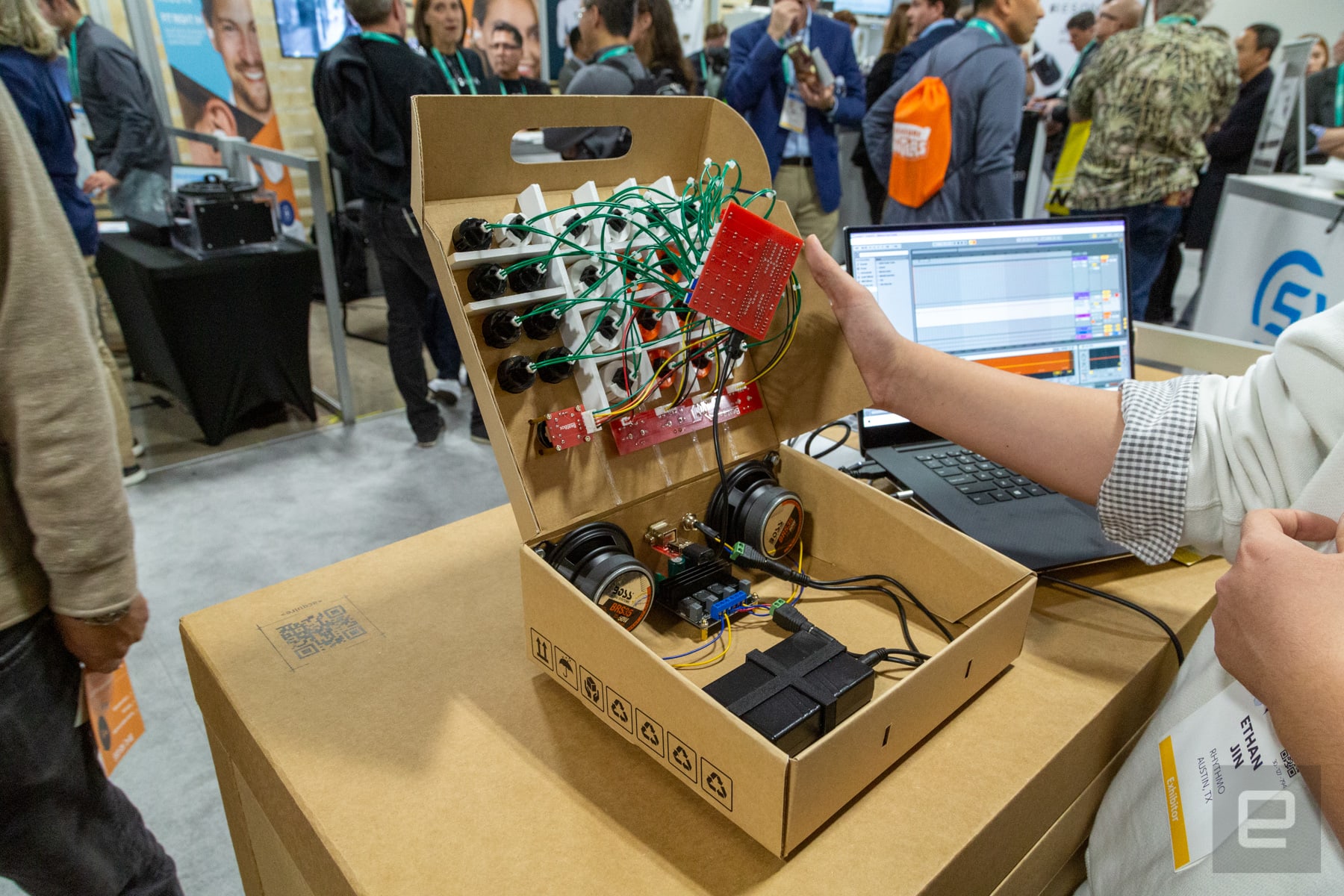 Everything had a place and plenty of breathing room, including the many, many tendril-like cords attached to the arcade buttons. Based on that oh-so-brief glance (and just to be clear, I'm not a health and safety official) it didn't look like the instrument would overheat and catch fire anytime soon.

The BeatBox will ship with a companion app for iOS and Android that includes tutorials, samples, and everything else necessary to start creating, saving and sharing beats. Again, I didn't have the time to delve through all of the educational material. I did, however, tap some buttons and try my best to create something -- anything, really -- that resembled music. Some tiny feet meant the BeatBox didn't slide around and I only noticed a bit of cardboard creak while my fingers drummed jubilantly on the buttons.

With the outer shell last forever? Probably not. The cardboard is recyclable, though, and the company will sell replacement shells for those who need them. Rhythmo has also promised to release a BeatBox template for people who have access to a 3D printer or CNC machine. "You'll be able to create your own boxes with any material you want," the company vows online. 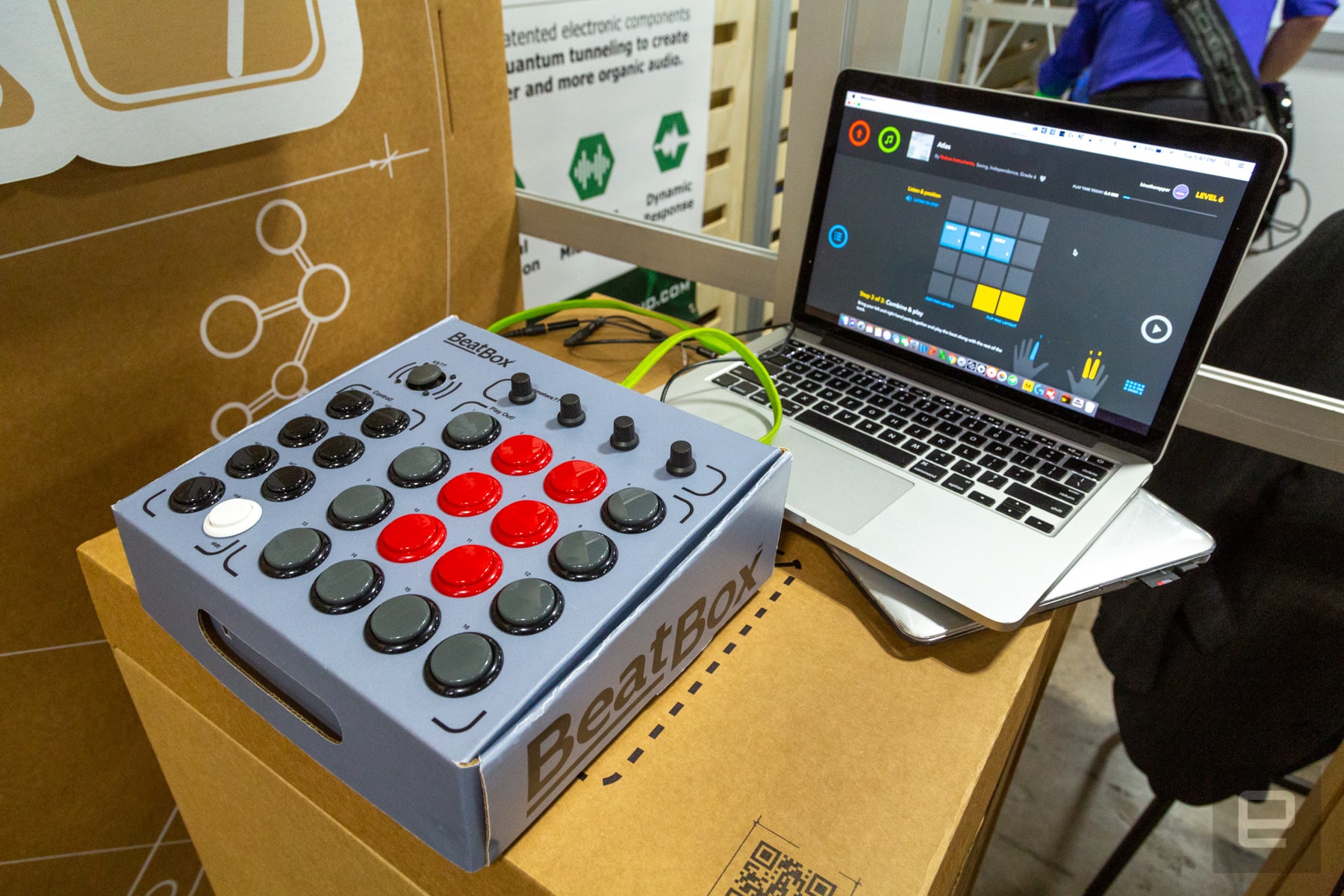 Further tuition will be offered through Melodics, a subscription-based piece of music education software. The BeatBox is a fully-fledged drum machine, though, and will work with established music-making apps such as Logic Pro X and Cubase. That means owners can extend their knowledge and, potentially, reach a professional standard by following the near-infinite number of beat-making tutorials that are already available online.

And that's what make the BeatBox so special. Many STEM-focused products -- especially those built around coding -- come with a finite number of activities that youngsters exhaust in a week. The BeatBox is a true instrument, though. If the owner develops a passion for songwriting, it's a product that could give them enjoyment for many, many years.