It can be upgraded to be waterproof, too.

For the eager gadgeteer, vacations are a challenge. How many action cameras should you bring? Will your drone pack in your carry on? What about the gimbal for your mobile phone? Not to mention all the memory cards, cables and chargers. Enter the PowerEgg X (yes, really) from PowerVision — a versatile drone that doubles as a stabilized handheld camera with facial recognition.

This isn't the first "PowerEgg" we've seen from the company. A couple of years ago, it released an ovular/football shaped drone that was a head-turner if nothing else. The PowerEgg X, is still egg-shaped (obviously), but this time around it's more like an egg on its side, than the original's "upright" design.

The original PowerEgg's flying arms folded out from its body. This time around, you'll need to clip them on. This might seem less elegant, but there's a practical reason, not least that it means the body of the drone doesn't need to be as large. But mostly, it's so you can stow them away when you're using it in handheld mode. Removing the arms to transition from drone to handheld camera didn't look entirely seamless in my demo, but it's a nifty feature nonetheless.

When in the air, the PowerEgg X can fly in winds of up to 38 knots, and two cameras either side of the main (4K/60fps) shooter provide forward-facing obstacle avoidance. There's also a downward sensor for precision landing and position holding mid-air. If you like to fly in inclement weather, there's also a waterproof housing (IPX6 rated). I saw a demo of the drone flying in a cage here at CES, there was a "waterfall" spewing the wet stuff, and the PowerEgg was more than happy to fly right underneath it. The water didn't seem to disturb the flying stability at all. 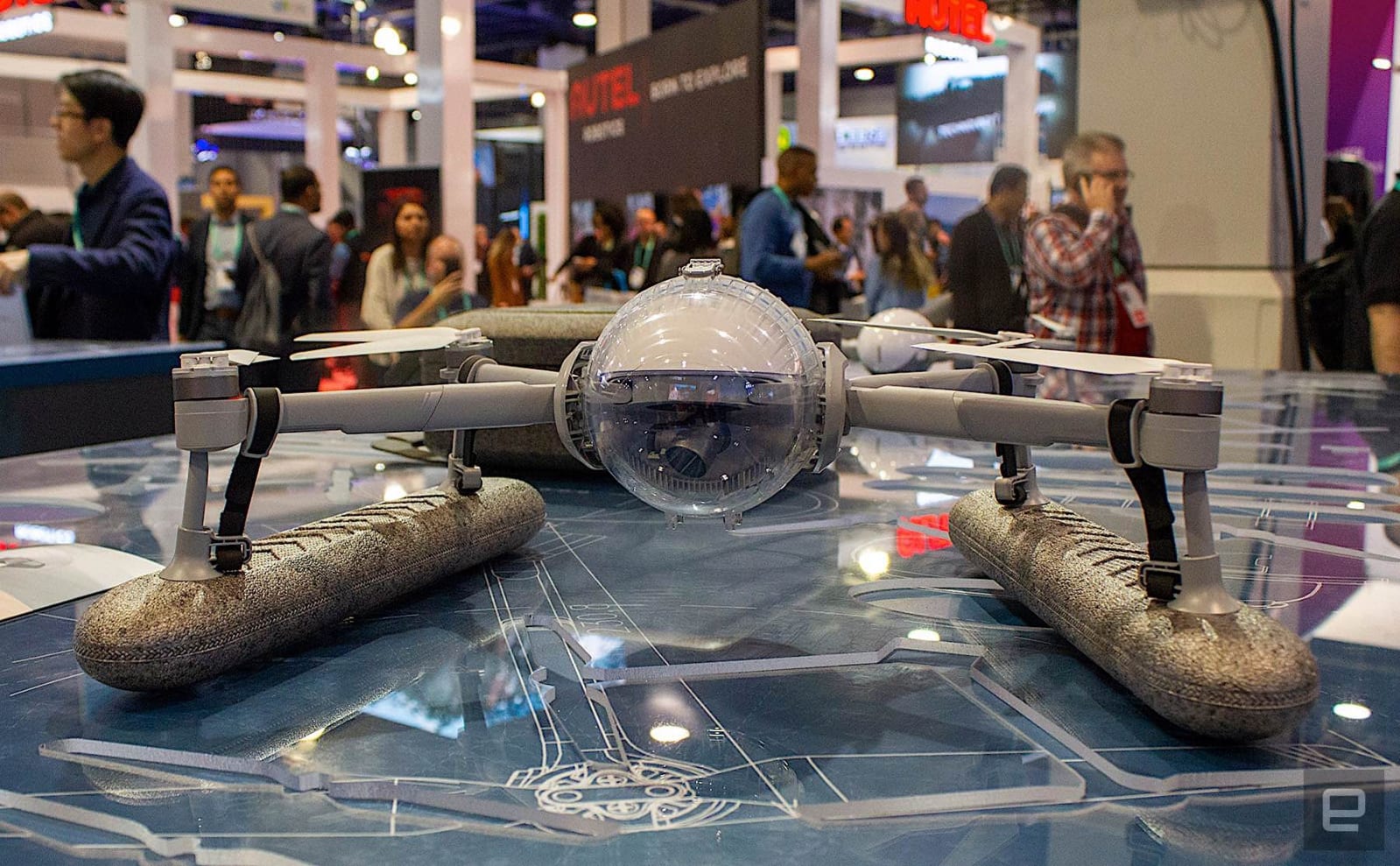 If you want to get a little more extreme, you can attach float accessories to the feet, and even land or take off from a body of water too. There are a few other waterproof drones that can do the same, but the PowerEgg X looks less utilitarian than those, and, of course, the extra handheld functionality.

One other interesting idea, is the ability to record your voice to the drone while it's flying via the mic on your smartphone, or your wireless headset. Most drones record silent video, as the noise of the propellors is all you would typically hear. With this "SyncVoice" feature, you can narrate over your video in real-time without the nasty buzz of the drone ruining everything.

In handheld mode, the PowerEgg X becomes a 90s-style camcorder, but with the benefit of a modern 3-axis gimbal. The smaller body size means its about the right size to be held in one hand (and there's a strap to keep things in place). Given the overall size, it's not quite as slick as, say, DJI's Osmo line, but it does mean you don't have to bring two different gadgets for land and air photography. 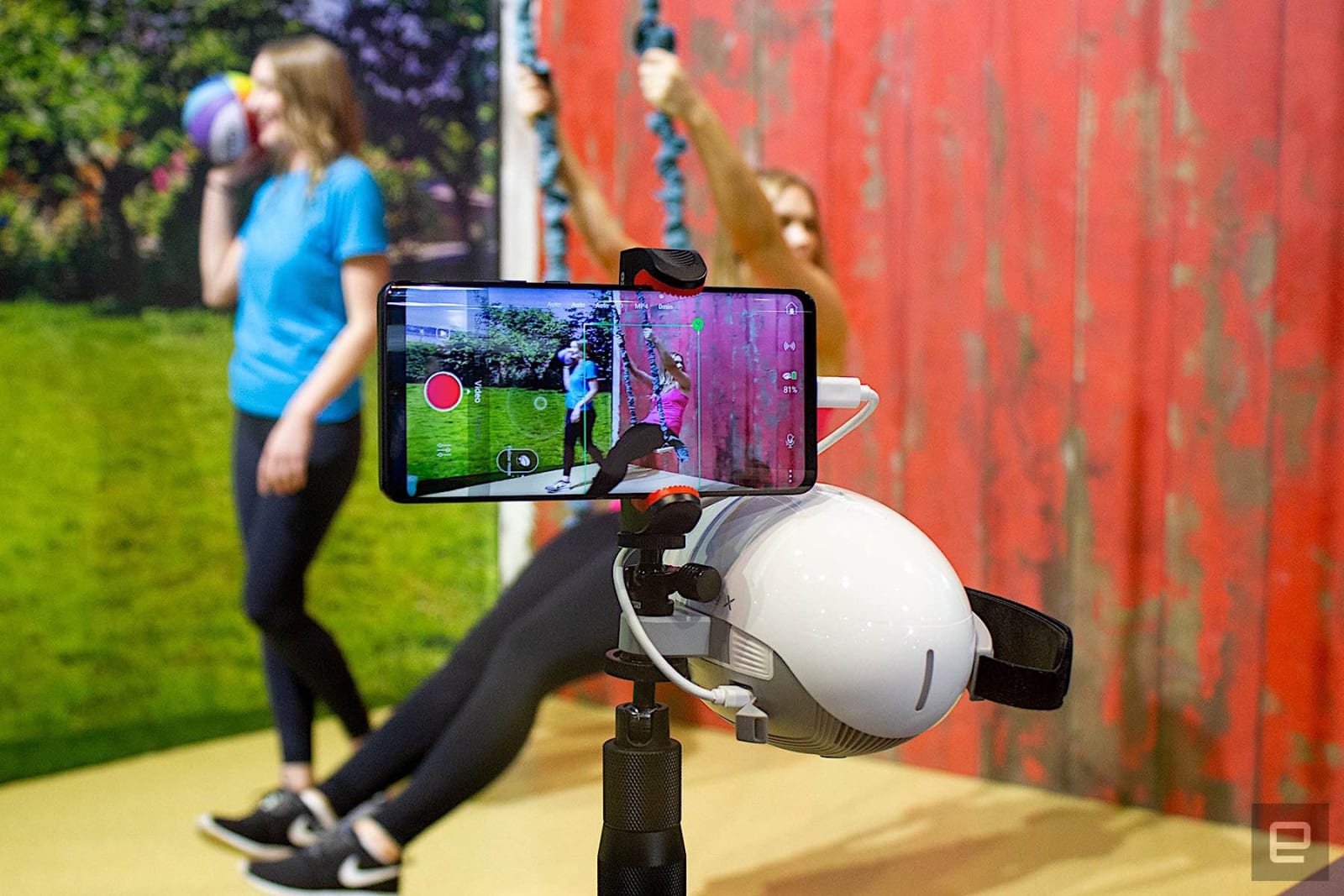 Lastly, there's the "AI" camera mode. This is the company's implementation of facial tracking, similar to a number of other "smart" camera modes (including the aforementioned DJI Osmo). I could see this being useful for YouTubers and the like, as once it recognizes your face, even if you leave the frame and come back again, it'll spot you and put you back in the center of the shot.

On the one hand, the PowerEgg X seems versatile enough that I could see it appealing to people that want a simple, versatile camera solution. Using one device on vacation, for example, keeps all your footage in one place, which you can edit via the app (along with any video from your phone). But there's always a sense with multi-function gadgets that it might not do each of those tasks as well as a dedicated device.

We won't be able to comment on that for sure until we've tried it for ourselves, but we're certainly happy to see companies trying different ideas. The PowerEgg X (drone and controller) will cost $899 when it goes up for pre-order this month, with shipping expected to be about a month after that. If you want the waterproof kit, it'll cost a slice more at $1,249.