We have quite a lot to be anxious about these days. Global warming, another potential war, increasing health care costs, Kanye, trade wars, gig economies and relatives with differing political views pouncing on us via social media. Then there's the dreaded range anxiety. A concern you still have, even though the last time you took a road trip Arrested Development was still on Fox, you're going to need at least 350 miles of range at all times. That's where the 204-mile range Audi E-Tron comes in.

Supplied with a 95kWh battery pack, 204 miles would seem to be on the low side. But an EV is more than a range number and the E-Tron otherwise has a lot to offer. It's a tech-filled, luxurious machine that's a joy to drive even if you have to stop more often during road trips.

Starting at $74,800, the Audi E-Tron is a posh SUV that brings the luxury you would expect from the automaker. The interior is comfortable, stylish and brings a good mixture of tech and opulence.

The infotainment is Audi's latest version of MMI, a dual-screen experience with haptic feedback that creates the sensation of pushing physical buttons while tapping on the display. The layout up top is similar to a tablet with quick buttons to the main features along the left side of the screen. 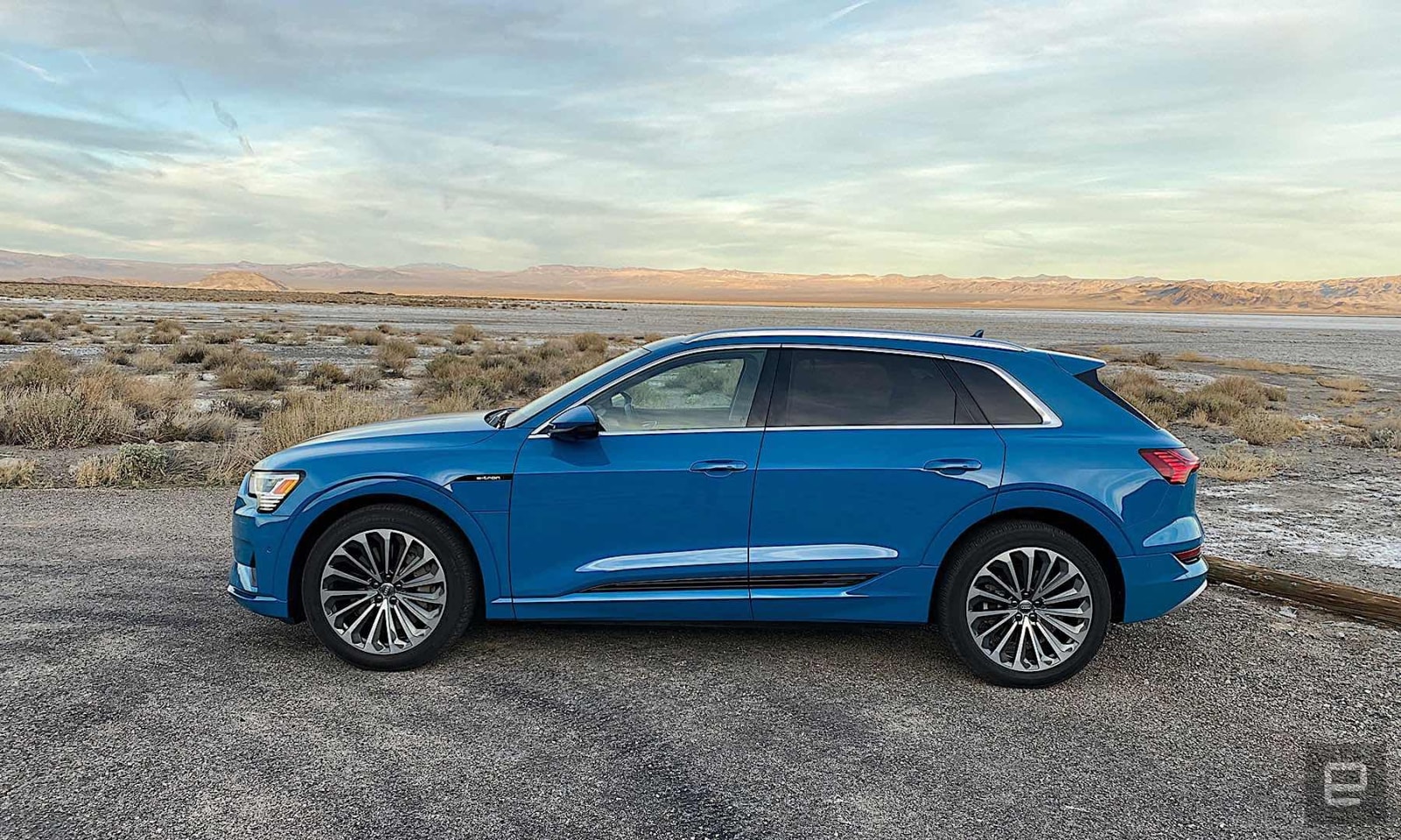 The lower screen is home to climate controls and when you need to write something, (like an address) it turns into a writing tablet with what you're scribbling appearing in the search field on the top screen. It's easier to draw letters and numbers than to tap on a digital keyboard. Of course, there's also the voice commands. Both input methods work well and even if the onboard Audi system can't figure out what you're looking for, there's a Google button that makes short work of your queries.

I will note that pressing on the top touchscreen requires a bit more pressure than a typical display. It takes a day or so to get accustomed to. Plus, the haptic feedback isn't supported by CarPlay. So if you're a fan of Apple's OS, you'll be experiencing two systems of tapping.

The rest of the interior is well equipped with comfortable seats offering heated, cooled and massage options. The rear is just as comfy as the front with plenty of room for even tall adults to sit back there. I drove the vehicle around Las Vegas with various Engadget coworkers and no one was wanting for legroom.

The EV powertrain has the expected torque leap you would expect from an electrified vehicle. The 400 horsepower and 489 pounds of torque create enough oomph to push the SUV from zero to 60 in 5.5 seconds. That should be more than enough to appease your need for speed.

The regenerative braking system relies on the paddles, which do a good job slowing the E-Tron. Still, I wish it had the option to set and forget a level of energy reclamation while slowing down. It's a small thing, but it's a feature I think people upgrading from a mid-tier EV to a luxury vehicle would expect. 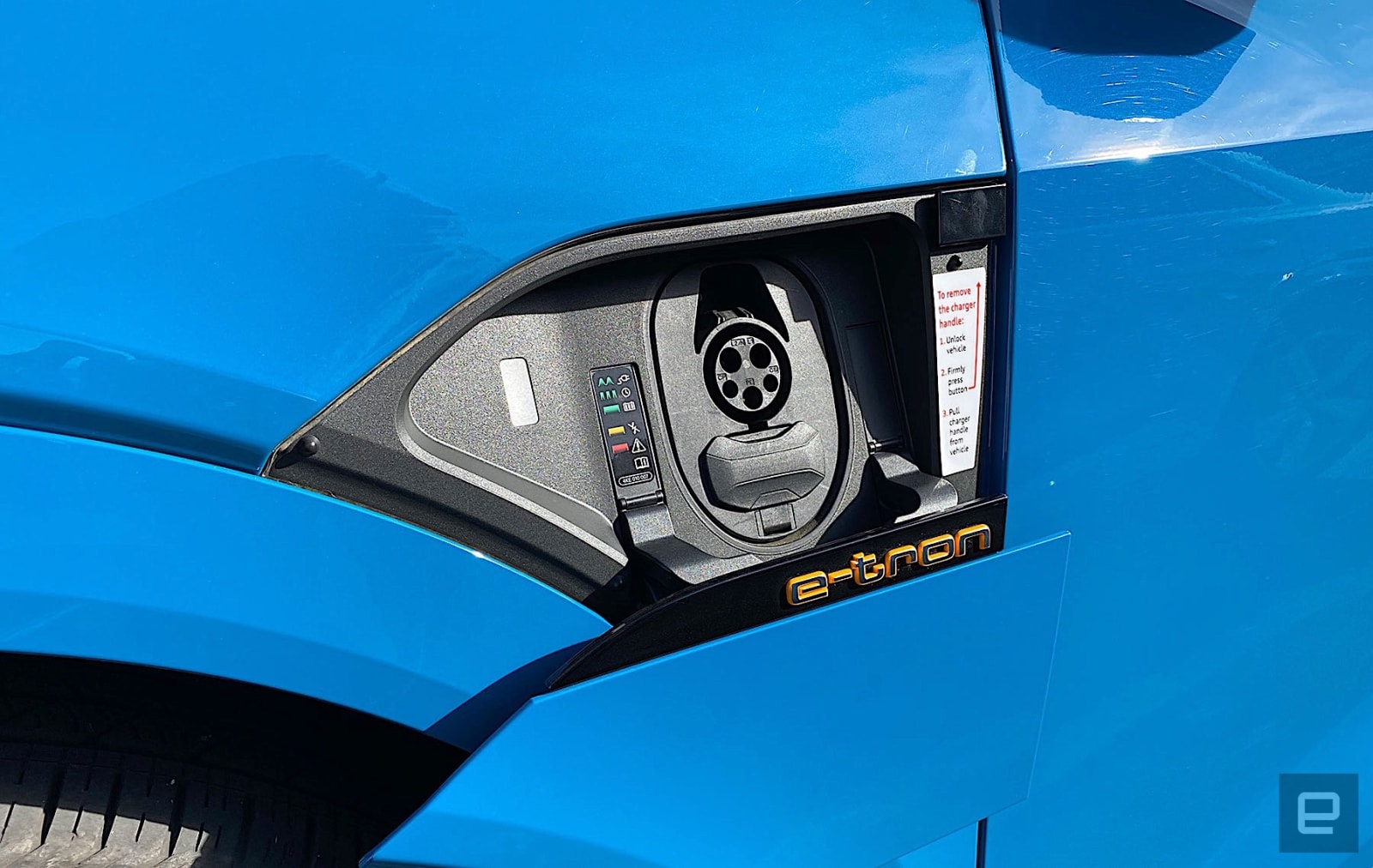 They might also be a bit confused by how you connect and disconnect a charger to the vehicle. To open the charging port door, the car has to be off. I didn't realize that initially, so I kept pushing the button wondering what was wrong. After finally figuring it out (via the Internet), I had to consult the World Wide Web once again to figure out how to unplug the charger. The vehicle still needs to be off. But in addition to waiting until the station releases the car, you need to press the charge-port door button again, wait a few seconds, and then you can remove the cable from the car.

It's a whole thing that seems overly complicated and it'll more than likely frustrate you until you figure it out. By my last day with the car, I was pressing the button to release the cable, then waiting for at least five seconds before even thinking about unplugging the car.

And that brings us to that 204-mile range. It's actually a strategic decision by Audi. By limiting the amount of power that can be put into the battery, the battery should last longer. It's a gamble on the automaker's part to keep its EVs on the road longer without having to replace the battery pack. It'll be a few years before we know if this theory will pay off. But for around-town driving, 200 miles of range should be plenty for most people. 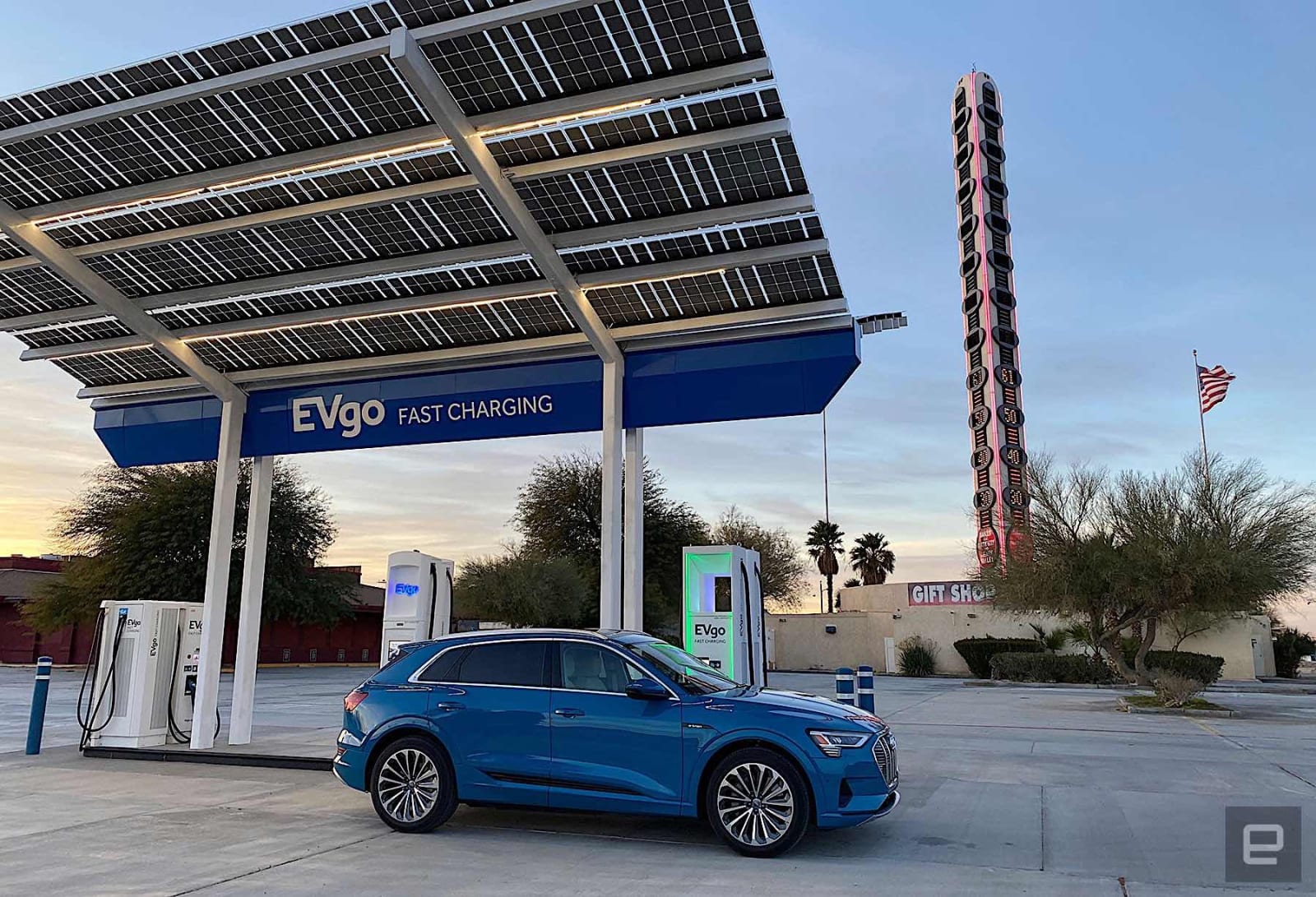 After driving through the desert from LA to Las Vegas and back in the car, I can say the range didn't stop me from reaching my destination. On a much longer drive, I probably would have had to add an additional charge stop to my itinerary. But two stops seems in line with most EVs on the road. It also helps that the E-Tron supports charging up to 150kW. Going from 20 percent to 100 percent typically took about 40 to 45 minutes. That last 20 percent is the hardest to top up and you would not typically go past 80 percent to preserve the battery, but I was on a road trip. So YOLO.

Overall, the Audi E-Tron is an impressive EV that, for the most part, successfully merges electrification and luxury. While the range is on the low side, it's more than likely adequate for most folks. The charging port issues are weird, but not a deal-breaker. Plus, those problems are likely to disappear from your mind when you're rolling in a truly luxurious EV.