When GoPro revealed the Hero 8's "mod" accessories, there was a clear favorite: The Media Mod ($80). The light and the fold-out screen looked handy, but the Media Mod added much-needed functionality beyond the action realm. Most notably, a dedicated shotgun mic, an HDMI output and a 3.5mm (mic) input. Vloggers rejoice! Finally, it's here, and we've had a chance to see how it stacks up to our expectations.

If you ever used GoPro's Karma grip, the Media Mod will give you deja-vu. Aesthetically, it's similar to the part that housed the camera. Including the fact you'll have to remove the GoPro's battery cover to connect to the USB-C port. That makes sense, but it also means you don't have easy access to the memory card, which was a prime perk of the Hero 8's new design (as you no longer needed a "frame" mount).

There are two other quirks that you'll instantly encounter. The Media Mod has a cutout at the bottom so you can access the camera's built-in mount fingers, but the thickness of the mod means you don't have much room to access/tighten the mounting pin below it -- especially if it's a shorter style one. It's even worse if you have the pin on the right as you look at the camera, as the mod appears to be designed for the pin to go on the left. It took me almost five minutes to remove a mount the first time I did it the "wrong" way. Thankfully, most pins can be tightened with a screwdriver/penny/key, but it makes for a slower, clumsier experience if you're changing the mount on the fly. 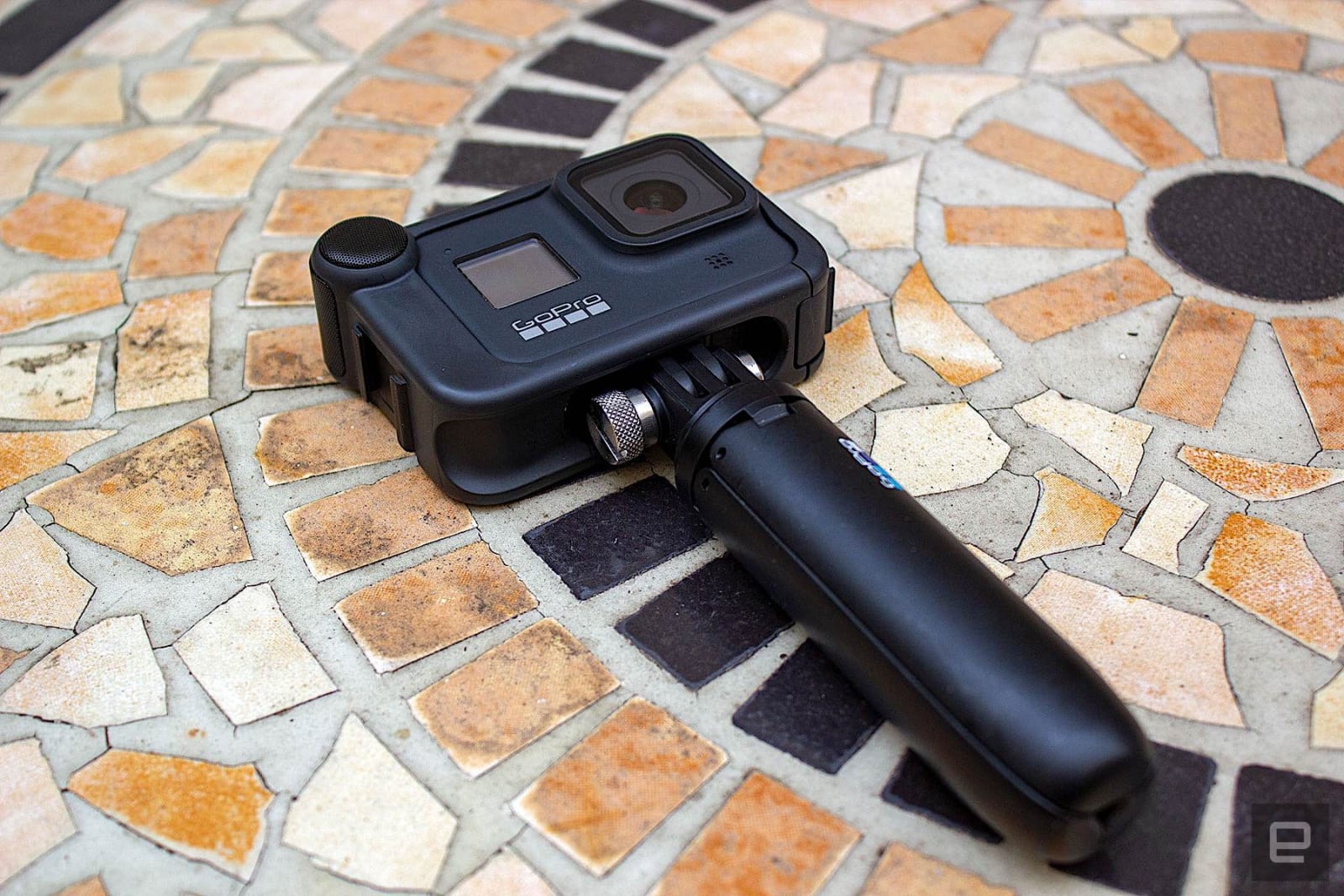 The second thing you'll notice, if you have the light accessory and want to add it to the top cold shoe on the Media Mod, is that you then won't be able to remove the GoPro without removing the light mod first. Its position up top prevents the latch door from fully opening. There is, however, another cold shoe on the side, so using that one would avoid that situation.

The mod also adds a little bit of weight and heft, but the setup is still easily pocketable, especially if you're using a small mount like the Shorty. Take note: the Media Mod isn't waterproof in any way, so this is a dry land only gig. I'm not sure who was planning to use this while surfing exactly, but at least know you can't leave it on if your vlog takes you into the water.

And vlogging very much is what the Media Mod is about. People have always used GoPros for video blogs, but they came with certain challenges. Challenges GoPro has been steadily squashing -- most notably with the addition of HyperSmooth stabilization in the Hero 7. With that one feature, the newer GoPros became more viable self-shooting options for those looking for a small setup.

One trade-off that remains (until now?) was audio. The GoPro's internal microphones do a decent job for ambient sound, but if you wanted better audio for your monologues you needed to use an external mic. This either meant recording into something else entirely (and synching it later in post), or buying a mic connector accessory. Not only was this an extra spend, but it also hung out the side of your GoPro in an ungracious manner.

With the Media Mod, you actually get two solutions to this problem. First, there's a built-in microphone. GoPro says it's actually two mics in a cardioid array, so you can choose whether to record from in front of the camera or behind it. You'll need to dive into settings to swap, but it's good to see both options here -- especially for those of us who prefer to remain behind the camera.

The second option is the aforementioned 3.5mm jack. It's placed around the back, so the cable won't get in the way of the lens, and you can wear your favorite lav mic as you run and gun. I guess, technically, you could feed other 3.5mm sources in here (like music) if you're feeling experimental. 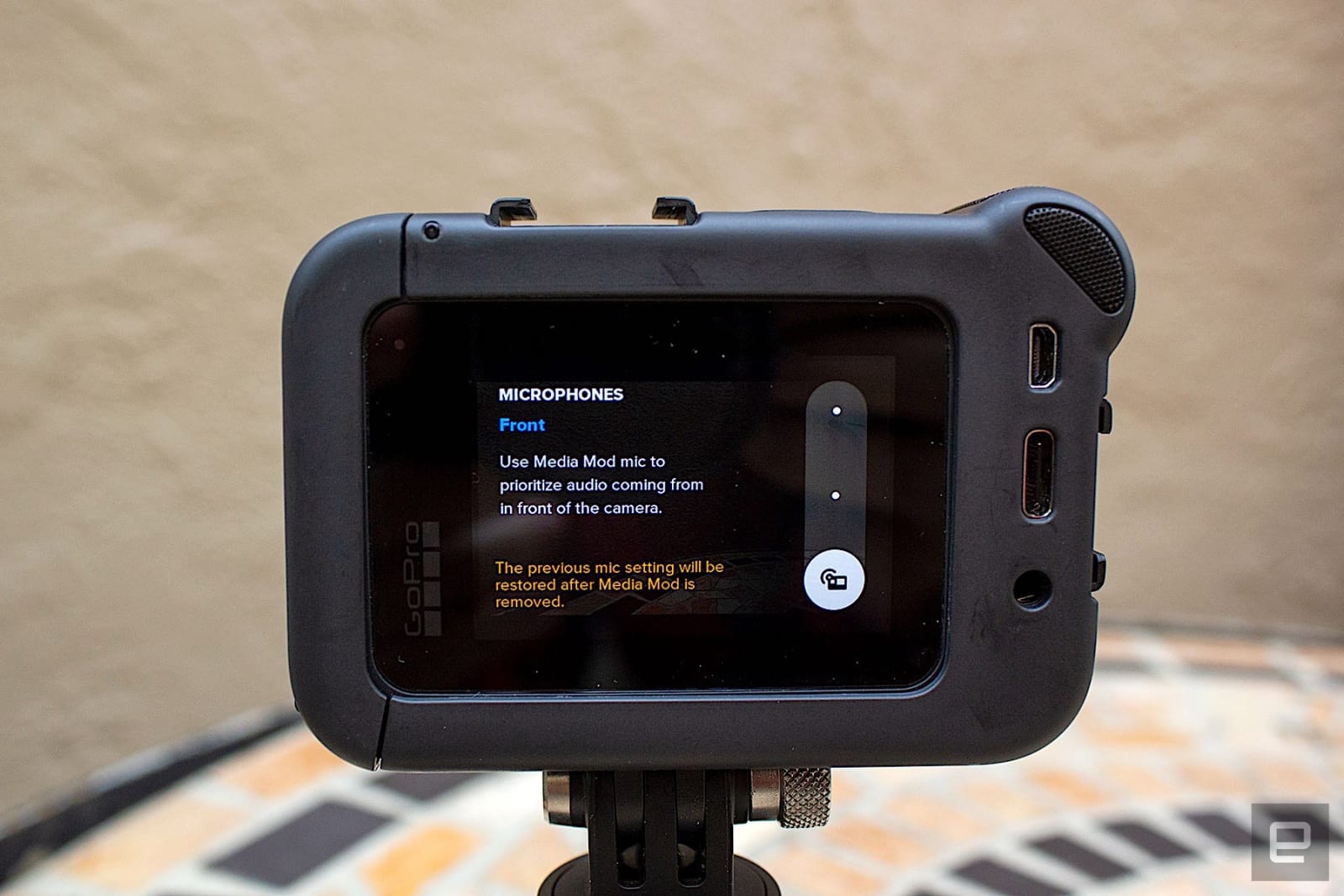 For the most part, the built-in mic is going to be your go-to option. It's a serious upgrade from a GoPro's internal microphone and doesn't require you bring a mic (one with a cable at that). With the mod connected, you'll dive into settings and choose whether to record from the front or the back. There's an option for "stereo," too, but that's just putting you back to the camera's microphones (but good to have the choice should you need it).

In my testing, the difference between the mic on the mod and the GoPro's native mics is stark. I might stop short of saying you won't need your expensive Rode mic (or similar), but for a solid upgrade with a tiny footprint, it's really going to make your video blogs sound less "roomy" and more professional.

When I recorded the same audio using a GoPro in the mod and one without the difference is clear. The recording from the mod has more focus on the voice, and more gain, but there's also more noise -- it's not a lot, but it's there. With the native GoPro audio, my voice was muddier and roomier, but with less noise. This was while testing at home at my desk.

If you venture outside, the difference is even more pronounced. The same characteristics carry over (more gain, a bit more noise but also fuller, thicker voice recording). I took it to a supermarket (I don't know why, but I had to start it... somewhere). As I moved around talking to my friend, our voices remained clear, while background noise seemed to be pushed further away. In the mod-free GoPro, the level of our voices was much lower and thinner. 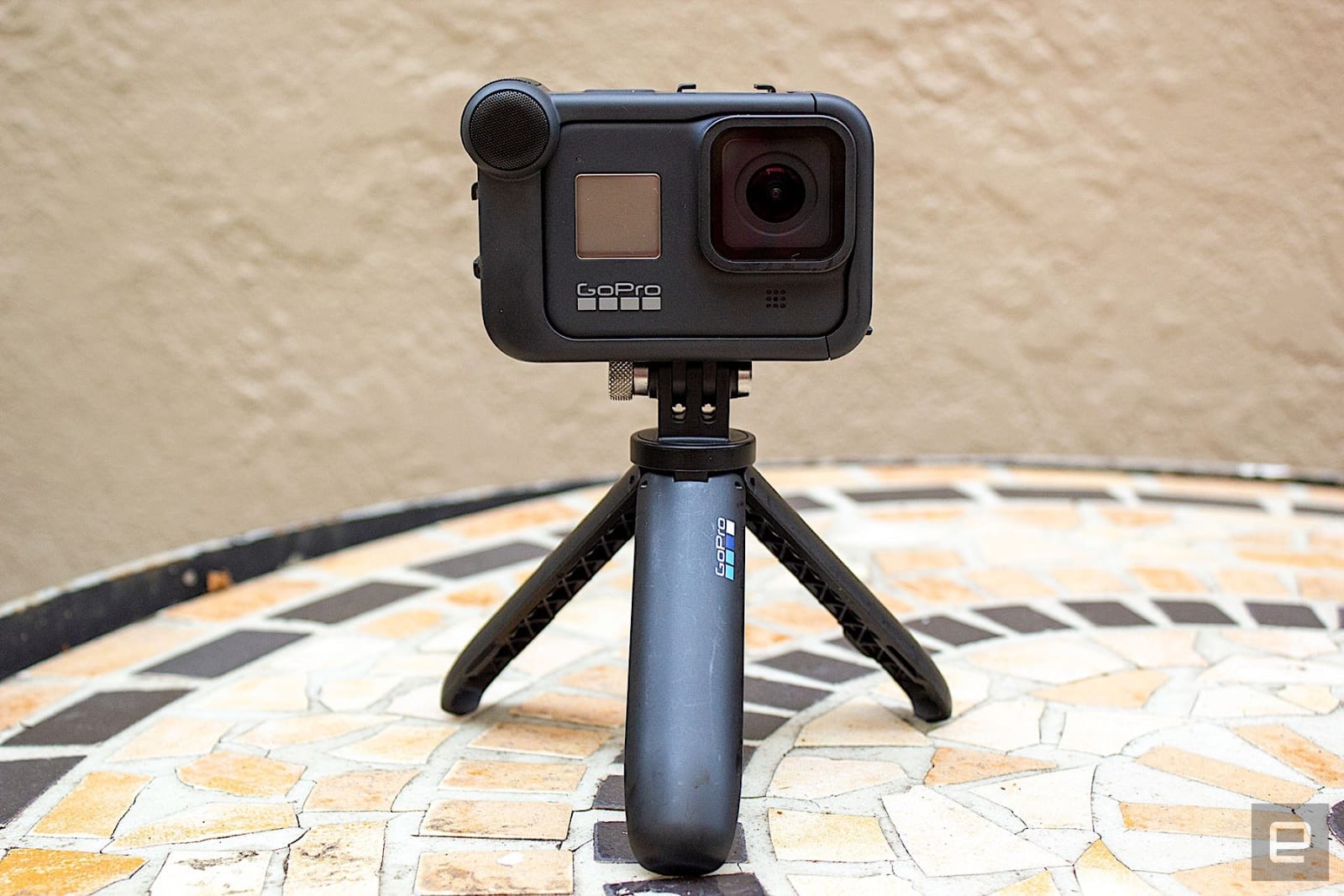 In one final test, I did the walky-talky vlogger thing in the street. It's here where I feel the mod really shined. When you listen to the native GoPro audio first, it sounds fine, but switching to the Mod's audio and closing your eyes, it sounded much more professional.

The difference is also (maybe even more) apparent when testing the same setup, but speaking from behind (with the Media Mod set to "rear"). With the mod, audio is clear as if someone is narrating the clip. Without, it's more like someone is speaking in the room... somewhere.

Despite the wealth of third-party accessories for GoPro, most shotgun mics are designed for DSLRs or cameras with a shoe mount. To work with a GoPro, they'd also need the aforementioned mic adapter accessory. In this context, the Media Mod is an elegant solution that comes with added perks (that 3.5mm port or HDMI output, for example).

There are a few practical quirks, but you'll likely get used to them soon enough. But if you frequently swap your GoPro between mounts, or want fast access to the memory card, you'll want to factor that in. Most of all, the Media Mod sets the stage for the GoPro becoming much more versatile, as the other two mods (display and light) rely on it to mount to the camera. If you're curious about expanding the functionality of your Hero 8, therefore, this is the logical place to start. Or at least once it starts shipping later this month (January 23rd).

All products recommended by Engadget are selected by our editorial team, independent of our parent company. Some of our stories include affiliate links. If you buy something through one of these links, we may earn an affiliate commission. All prices are correct at the time of publishing.
View All Comments
GoPro's Media Mod is an upgrade for vloggers on the go