Over the course of 90 minutes, I died 14 times. I was drowned, beaten, burned, cut down, crushed by a stone mallet the size of a small Volkswagen and repeatedly impaled on the pointy ends of very sharp spears. But despite my initial negative expectations for Nioh 2, the upcoming samurai action RPG from Team Ninja, I enjoyed almost every bloody minute of it.

Nioh 2 is actually a prequel to the original game from 2017. In the OG, you played as Irish sailor, William, who had to hunt down an evil sorcerer during Sengoku-period Japan. In Nioh 2, William won't be born for at least a century. The story takes place in the year 1500. You play as both a Yokai spirit and another main character, Toukichiro, who together must become Japan's second "great unifier." Like its predecessor, Nioh 2 is loosely based on real historical figures: General Toyotomi Hideyoshi in this case.

The protagonist isn't the only new feature in the sequel. Team Ninja added new weapons, enemies, allies, special moves and customization options. Since half of your character is a spirit, you'll now be able to unleash special attacks using their otherworldly powers, transforming the player into a Yokai and granting them abilities not available when in human form.

You can also assign specific abilities to the control pad to use in combat. These powers come in three flavors -- Brute, Feral, and Phantom -- each with their own strengths, attributes, buffs and weaknesses. I only got a quick look at this menu during Sony's hands-on demo on Monday, it was right after death number six, but you'll have your choice of seemingly dozens of special powers to play around with once the game launches. New powers can also be collected from the Soul Cores dropped by defeated enemies. These powers are limited by the amount of anima you have, which is displayed under your Ki gauge.

When it comes to weaponry, Nioh 2 brings back the classics. Players will have their choice of the original swords, axes, spears, and kusarigama from the first game, as well as the tonfa, odachi and hatchets from the DLCs. Plus, Nioh 2 is introducing the "switch glaive," which is a collapsible scythe-spear thingamajig. It has good range and decent attack power, though I should note that I was playing a mid-game level while outfitted in maxed out legendary armor and weapons -- so my experience may be a bit skewed from a normal playthrough. And I still died every six and a half minutes. 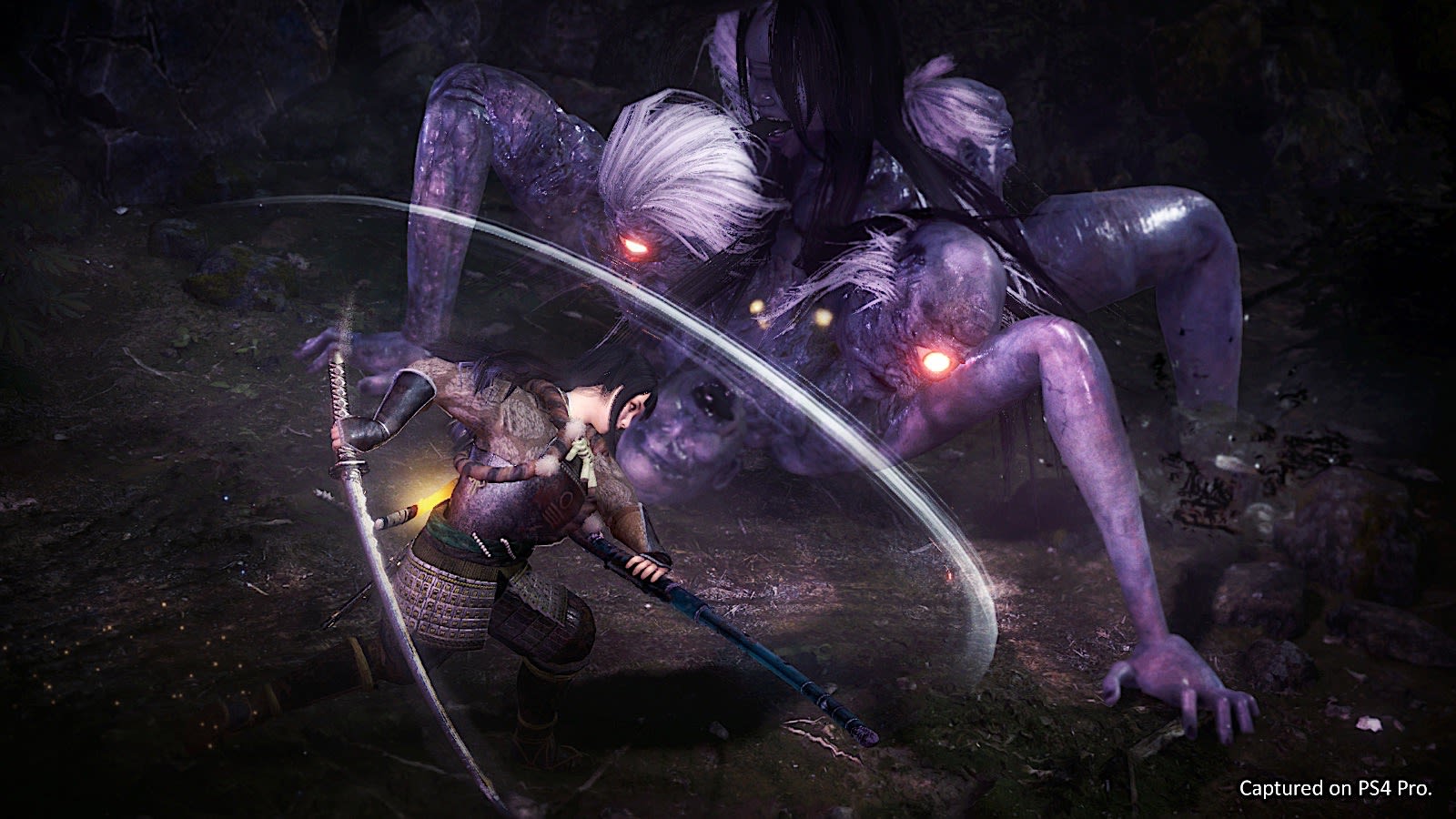 You're going to need all the help your equipment can grant given what you're up against. Team Ninja went wild with the yokai character designs. Undead foot soldiers and mutating sergeants run interference for larger, more aggressive, and more deadly demons. The VW-sized mallet that rendered me into samurai paste was wielded by a hulking demon consisting of little more than a cycloptic head perched atop a single hopping leg. And that was probably the easiest demon I managed to beat (eventually), at least compared to the lightning fast, spear-wielding mid-level boss and 15-foot tall hatchet-throwing boar-tusked general at the end.

While this is a single-player game, you won't be fighting entirely alone. Thankfully, Team Ninja is introducing AI-controlled allies in Nioh 2. Spawned from flaming blue graves (assuming you have a sufficient number of relic cups with which to revive them), these temporary compatriots will fight alongside you until they've been killed or recalled to the netherworld. They're not particularly smart or capable but they know how to attack and can prove invaluable in tough fights -- even if only serving as bait for the enemy's blade.

Despite the new weapons, enemies, and allies, Nioh 2 remains faithful to the original. In that it is ridiculously punch-yourself-in-the-face impossible to beat. It's not challenging, or demanding, or taxing. It's masochism with a six-axis controller. This game is hard. It's hard in ways that'll make you question your judgement in ever purchasing it, or even a PS4 to begin with. What were you even thinking?

You'll block a moment too late and be run through by a spearman, you'll fall through a crack in a bridge and drown, you'll get one-shotted by bosses (again and again and again), or you won't notice the suicide ninja hiding behind a barrel until he leaps out and atomizes you both. Then everything resets and you get to do the whole section again. And again. And again until you've memorized every enemy position, worked out their timing and attack patterns and know the terrain like the back of your hand. Then you execute your strategy, successfully hacking and slashing your way to the next savepoint. It's those fleeting, exhilarating moments that make this game worthwhile: When the plan finally comes together and you're the last one standing.

There are a billion different things (and just as many threats) that you have to pay attention to if you want to survive in this game. Most of that management needs to be done in parallel, given that even a single mistake is all it takes to send you back to the last save shrine. Conversely, having so many aspects of your character's development to keep track of empowers players to intensively customize them from physical appearance to fighting style to weapon and magic preference. And since the game is so incredibly difficult, you really have no choice but to continually tinker with your character, study your opponents, and adjust your tactics to maximize your chances of making it through the next battle alive.

Nioh 2 is slated for release on March 13th, 2020. Be sure to stock up on replacement controllers before then.

All products recommended by Engadget are selected by our editorial team, independent of our parent company. Some of our stories include affiliate links. If you buy something through one of these links, we may earn an affiliate commission. All prices are correct at the time of publishing.
'Nioh 2' killed me 14 times in 90 minutes
actionRPG
av
gaming
hands-on
Koei Tecmo
Nioh 2
ps4
RPG
sony
Team Ninja