Despite nailing the reveal at MWC last year, Huawei's impressive foldable phone, the Mate X, never made it any further than briefings, press conferences and Chinese early adopters -- there's a reason we didn't review it. The Mate X wasn't cheap, it wasn't perfect but it still seemed like the strongest foldable option at the time. (And we all know how Samsung's first attempt turned out.)

Samsung's remade Galaxy Fold is the perfect analog for Huawei's Mate Xs 5G, a phone that should be better prepared for prime time. Nothing particularly major has changed since the Mate X. There's still an 8-inch unfolded display, transforming to a 6.6-inch phone in standard smartphone mode.

So what has changed on the Mate Xs? There's still a release button to satisfyingly unfurl the smartphone, but the hinge itself has been upgraded. According to Huawei, the number of parts and components inside the hinge is up from around 100 to 150. I can feel the difference -- I think? Huawei didn't have last year's Mate X around for comparisons, but it feels like it has more heft to it -- something that the original Mate X wasn't particularly lacking.

Unfolded, the screen isn't quite perfectly flat, but the seam is as subtle as Samsung's Galaxy Z Flip, which also packs a more advanced folding screen. For the Mate Xs, there are no claims of ultra-thin glass, but there are some technical improvements: four layers include a new polyamide material aimed at keeping the screen better protected.

Like my colleague Chris Velazco, who has reviewed most foldable phones so far, I'm nervous about the toughness of foldables. The Mate Xs isn't immune to those concerns. Along the back, the seam of the hinge seems a little too exposed, you can see what appears to be some of the internal hardware. Sure, this may be the early model ahead of finalized retail phones -- but it still makes me nervous.

As for the rest of the hardware, there are more upgrades. There's a 4,500mAh battery, split between two cells, with Huawei's new high-speed charging standard. That's a lot of power and it demanded a new cooling system, with a design called "flying fish fin" to speed up the cooling process.

This helps with the new Huawei-made Kirin 990 5G chip, too, which boasts some high theoretical data speeds, but I'm still waiting for confirmation on whether the chip now supports the millimeter wave tech used by US carriers (not that it matters at the moment) and other phone networks around the world. 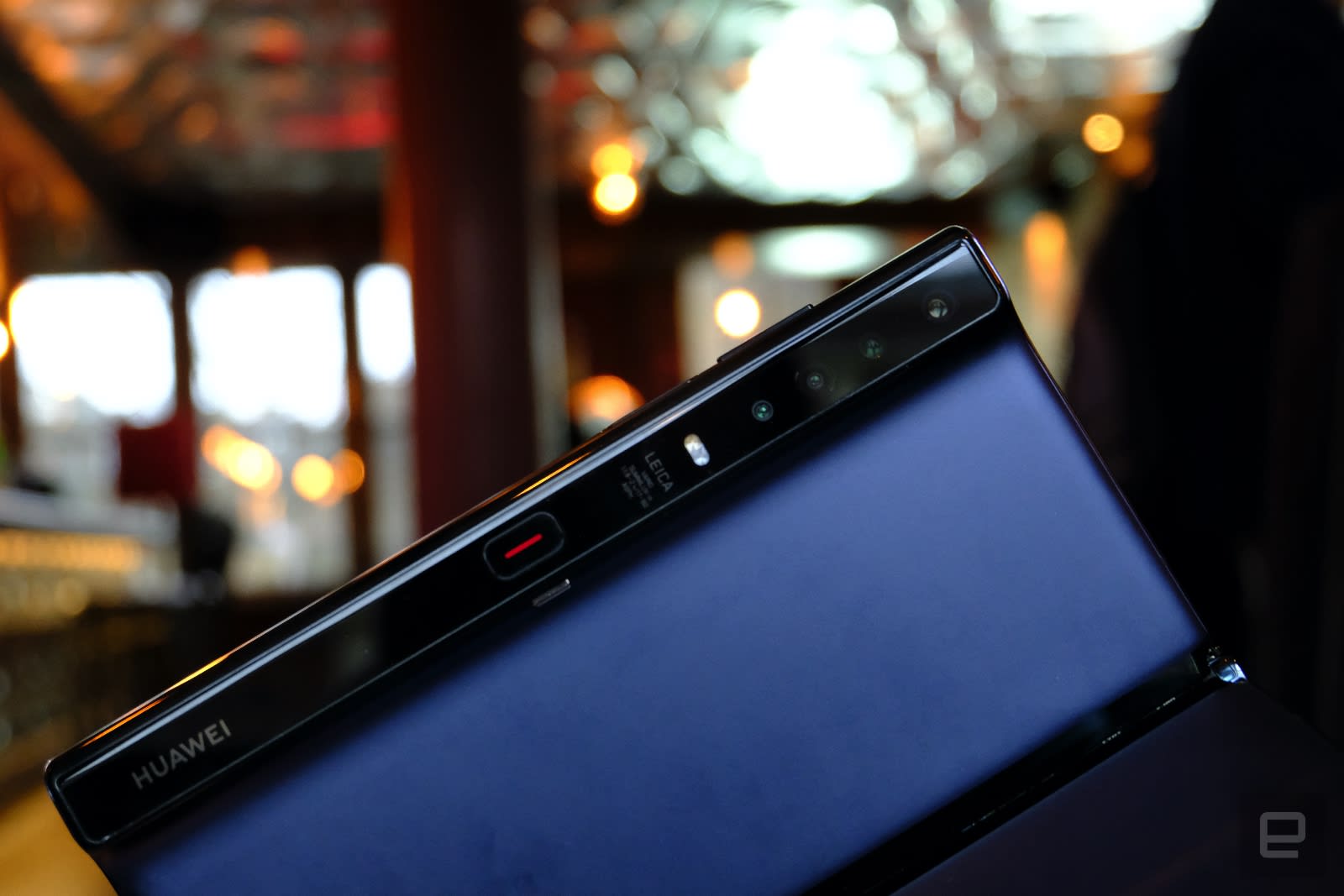 The camera array, located again on the hinge unit, includes a 40-megapixel main camera, with an 8-megapixel telephoto camera and an ultra-wide 20-megapixel shooter. There's a time-of-flight sensor, too, for Portrait effects and such. Nothing has particularly changed here; Huawei's mobile cameras are still among the best -- even if a lot of people will never get to try them.

Beyond the hardware upgrades, Huawei outlined some new scalable app capabilities that should make the most of buying a foldable phone. The best example I saw in my limited time was how Huawei's email app would switch UI dependent on whether the Mate Xs was unfolded or not. At full-size, you can see and interact with your inbox tabs -- the kind of view you'd get on a proper tablet. Huawei has put work into its own apps to better fit the foldable's unorthodox screen size and help strengthen the proposition of the thing.

The struggle remains that it's not got the Android apps and services you expect and want to use. With Huawei's post-Google devices, running on Android Open Source Project (AOSP), you get the Android feel, but it's hampered by a lack of Google Maps, Gmail and all the third-party apps on Google Play.

Folding and unfolding aside, the Mate Xs made for an otherwise dry first impression. I watched YouTube through the browser, played with the camera, but then what else can I test? I could install TikTok, I guess -- it's one of the few notable apps available on Huawei's version of Google Play. 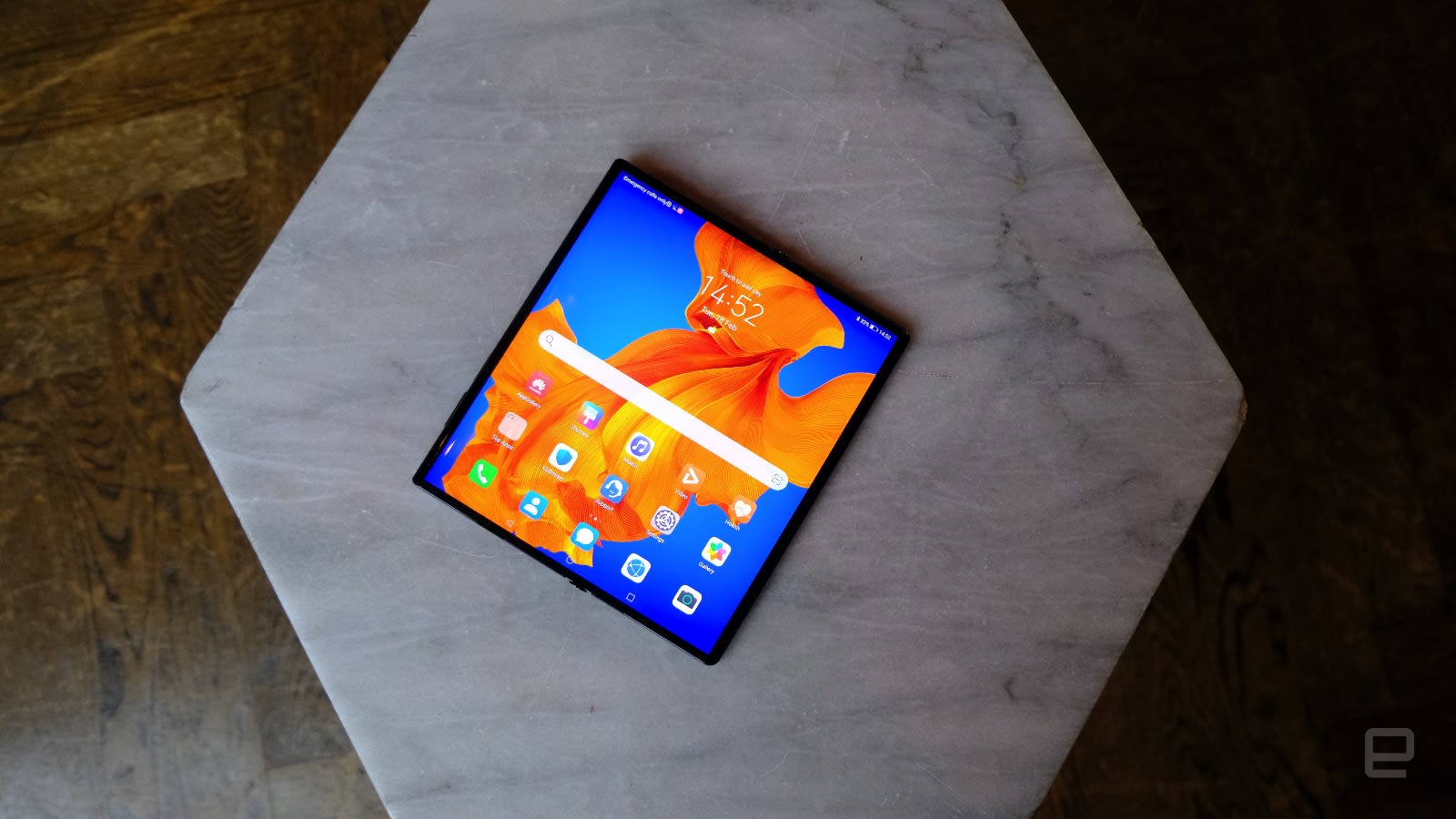 Like Huawei's other 2020 hardware so far, the Mate Xs looks and feels good. The specifications are decent. These devices are exciting, desirable products, but the reality -- what if you actually bought one? -- is duller, and the software is to blame.

Huawei is offering its help (and money) to speed up app development and get apps like Uber working outside of Google's services, but progress is slow. If you're keen enough to hunt down APKs to get your favorite apps on Huawei's newest phones, you can do this. But according to those who've battled with the Google-less Mate 30 Pro, and our own experiences, it's a mess. Some apps will crash, some won't work. The realities make it hard to get more excited about such a device.

Huawei says the Mate Xs will cost €2,499 (around $2,700) for a model with 8GB of RAM and 512GB of storage. What's more, the company says the device will be available "globally" starting next month. Hardier folding mechanisms and better uses for the unfolded screen are necessary and great news -- but this Google stuff remains the company's big challenge. The future of Huawei's foldables hinges on it.

All products recommended by Engadget are selected by our editorial team, independent of our parent company. Some of our stories include affiliate links. If you buy something through one of these links, we may earn an affiliate commission. All prices are correct at the time of publishing.
View All Comments
Huawei’s Mate Xs is a tougher foldable phone lacking the apps you want