LG isn't new to this dual-screen thing, but it's just as finicky as ever.

LG's smartphone business spent most of last year struggling to turn a profit, but the company has found at least one strategy it wants to stick with. Instead of giving people unpolished, unproven, expensive foldables, it starting building phones you could attach secondary screens to when you needed a little extra room to work with. LG hopes this wide-eyed idea enough to convince people to buy its new V60 ThinQ 5G, but after a little hands-on time, I'd advise a little caution.

We've tried this dual-screen business before, most recently in last year's G8X ThinQ. At the time, I found myself occasionally enjoying the weirdo on-screen game controller you could run on one of the screens, and the way that you could set a full-screen keyboard on one display while watching your words fill an email window on the other. Those features are back this time, too, and they're as helpful as ever on this pair of 6.8-inch displays. Almost everything else about the experience, however, still feels confusing and unpolished.

When I last tested an LG dual-screen phone, LG allowed only one app to stretch across both screens: Chrome. Now the company has loosened up a bit, allowing apps like YouTube, Maps and Google Photos to treat those two separate screens as one big one. Makes sense, right? Presumably, if you're sticking a case with another entire screen onto your phone, it's because the space your existing screen offers isn't enough. Problem is, the bezel separating the two "halves" of that large screen is just as massive as before, so trying to watch a YouTube video across both is more sad than satisfying.

Oh, and even worse, this theoretically helpful feature isn't even enabled by default -- you have to root around in there phone's settings and toggle this "WideView" support for each of the apps that could feasibly use it, not that there are many. And that's to say nothing of the trial and error that goes into using these two screens in tandem effectively. Getting things working just right takes more fiddling than it should, and I could see lots of people getting frustrated along the way. There is one upside to all this, though: At least for a while after launch, LG and its carrier partners will be giving away these second-screen cases away to V60 shoppers for free.

It's a good thing the V60 leans into this gimmick because it's largely unremarkable otherwise. The 6.8-inch P-OLED screen is decently handsome but runs at 2,460 x 1,080 -- a far cry from what we've seen on the Galaxy S20s. There's a 5,000mAh battery tucked away inside these lightly redesigned bodies. And like just about every other expensive Android phone you're bound to see this year, the V60 uses a Qualcomm Snapdragon 865, this time with 8GB of RAM. As you probably guessed by the name, the V60 also plays nice with the nascent 5G networks, though LG is being a little cagey about details. (The company's press statement says AT&T, T-Mobile and U.S. Cellular and Verizon have all committed to selling the phone, but it appears only Verizon's with support both 5G network types.) 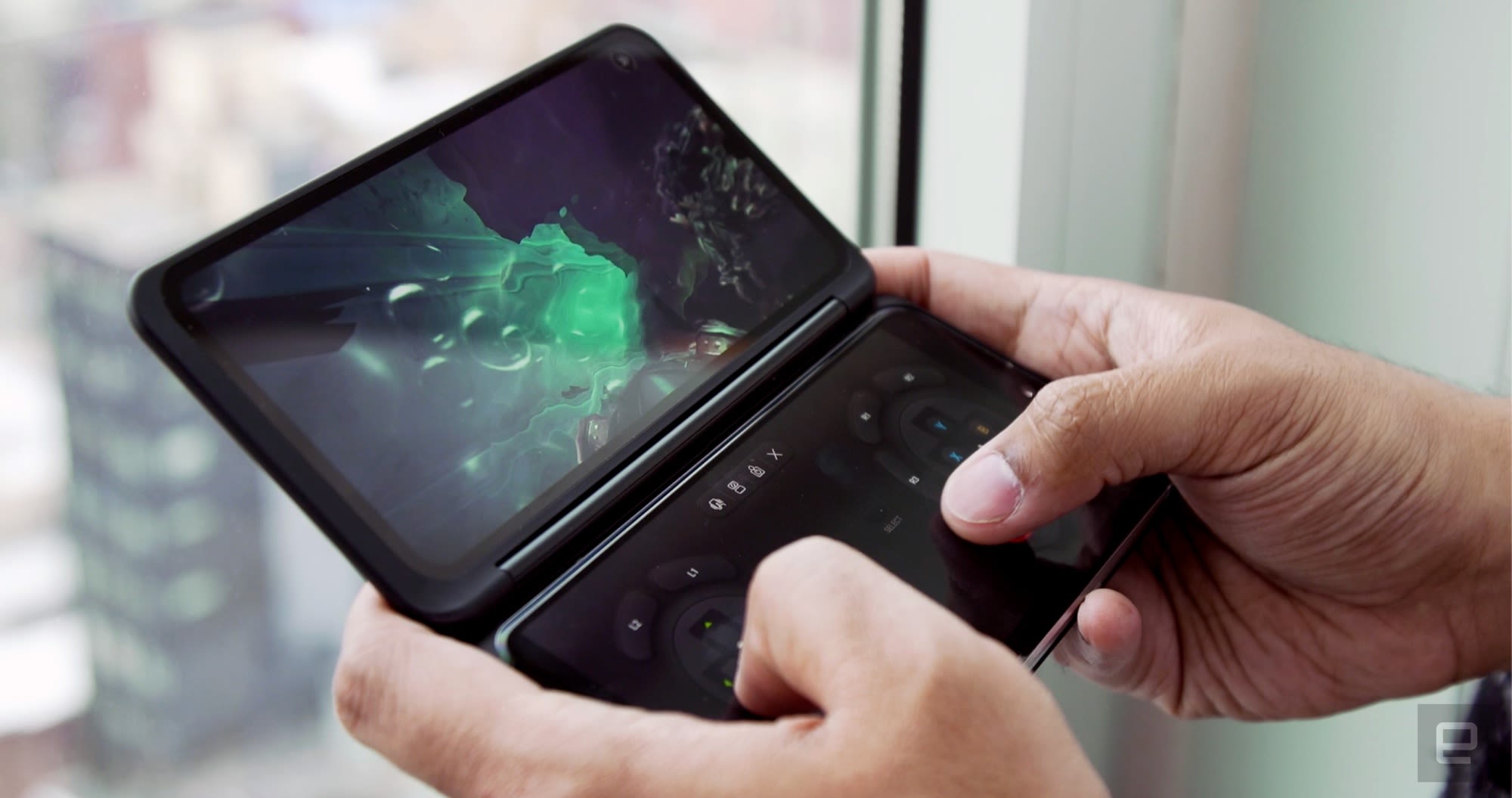 And then there are the cameras. Before LG's V-series was retooled to become synonymous with 5G, it was meant as a sort of tool for content creators and the media-obsessed. They were among the first phones we've ever used that gave us five cameras, not to mention the first that let us shoot video with a flat log profile so you could color grade your footage afterward. This year, though, LG is playing it safe.

The most notable change is a reduction in the number of cameras: The V60 only has three, a 10-megapixel front-facer, a 13-megapixel rear ultra-wide with a 117-degree field of view, and the 64-megapixel main wide sensor. That last one will almost certainly see the most use, but not exactly for the reasons you'd think. Yes, it seems to take crisp, detailed photos with solid color reproduction under the right conditions -- I say "seems" because the weather was pretty dreary on the day we tested it, so most of the sample photos we took couldn't help a but look a bit drab.

What's really odd here is that, rather than give the V60 a dedicated telephoto camera like its last two V-series phones, LG decided that we're all better off using this main camera for zoom photos. I, uh, disagree. The company says you'll be able to push in up to 10x without a significant reduction in quality, but during our testing, the results were anything but satisfying -- fine details tended to get smeared into oblivion. That's not a huge surprise since we're looking at a purely digital zoom method, but it's still awfully disappointing. For a time, V-series camera setups were all about flexibility, and there's precious little of it here.

For what it's worth, LG has added a handful of new camera features here to help sweeten the deal -- it's just too bad they didn't seem to work very well. Consider video: The V60 can capture 8K footage at 24FPS if you're into that sort of thing, but I noticed an annoying hint of lag as I stood on a balcony zooming in on the New York City skyline. When there's a delay between moving the camera and seeing that movement reflected on the screen, thing start to feel cumbersome and unnatural almost immediately. Hopefully this gets ironed out by the time the V60 is released. 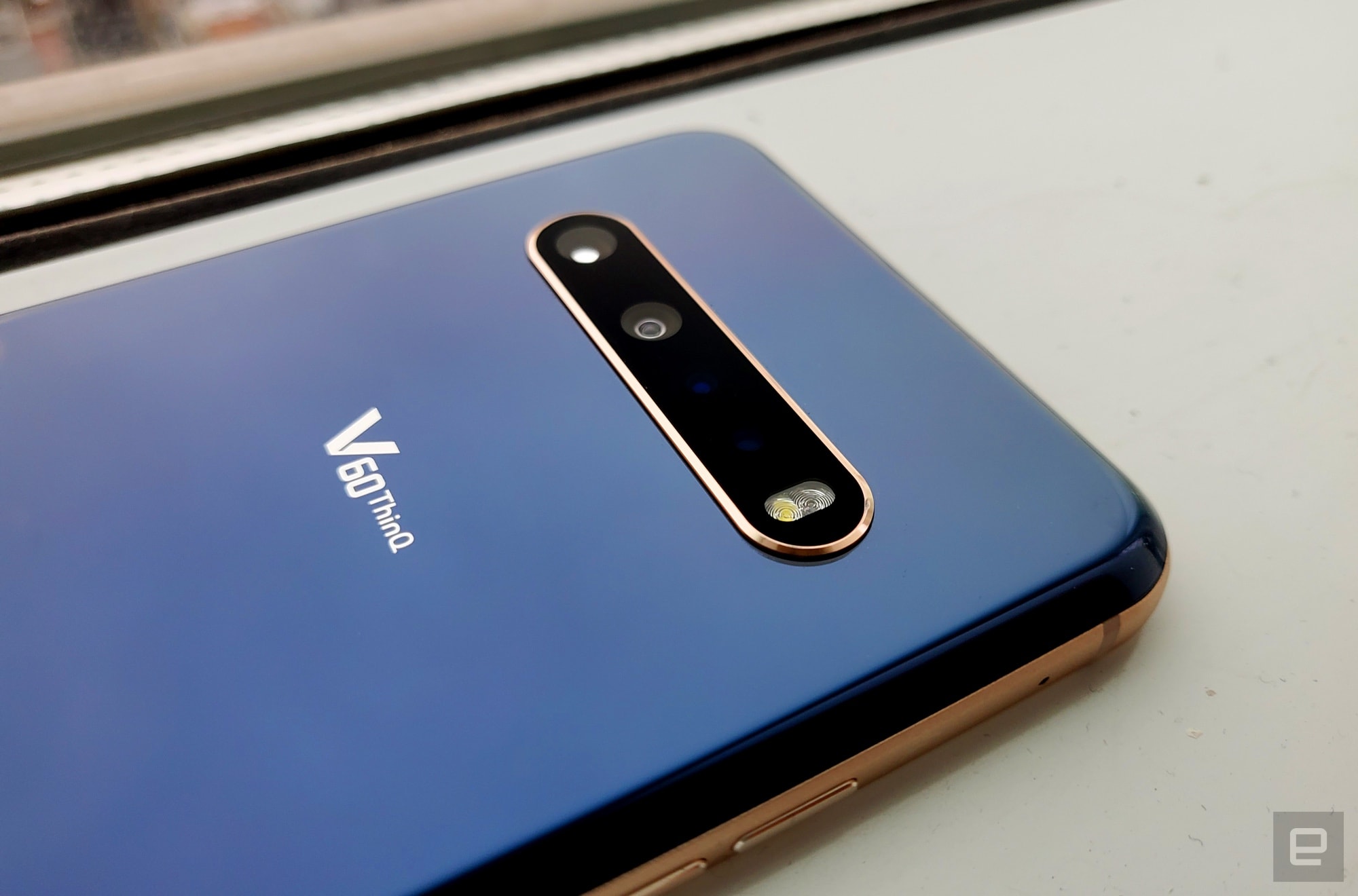 Oh, and there's an odd 3D portrait feature built into that camera that's meant to replicate those pseudo-3D photos you might have noticed in your Facebook feed. The V60 uses a time-of-flight sensor around back to determine the level of separation between your subject and its background, and at least that seemed to work well. It's too bad, then, that the resulting photos looked pretty lousy -- you're supposed to be able to move the phone around to see around your subject a bit, but when do you, you'll spot plenty of digital masking trying to fill in space that your subject was never physically filling in the first place. Needless to say, it's pretty bizarre.

In fairness to LG, there are some good things about the V60. It's blazing fast thanks to its high-end processor, and LG's custom skin doesn't clutter things up much. It still has a 32-bit Quad DAC, so it's likely to be one of the best smartphone choices for people who care about audio quality. It also looks much nicer this year, thanks to a two-tone redesign. Still, I can't help but feel disappointed in what the V60 fundamentally offers. The dual-screen gimmick, which was already plenty finicky, isn't any less confusing to use than before and the camera setup lacks the charm and flexibility of earlier models. That's not a great look for a company like LG as it rolls into 2020, but who knows -- maybe the phones it started teasing to us gathered reporters will make more of a splash when they arrive this summer.