Easy-to-use mods brought me back to ‘Freespace 2’

Knossos takes the headache out of managing mods.

Game genres can wax and wane in popularity. It's a sad truth that two of my favorites, real-time strategy and space simulation games, have been on the decline since the glory days of Tie Fighter and Warcraft. We may never see the likes of Warcraft 3 again, but in recent years there have been some valiant attempts to revive the space sim, with releases like Everspace, Rebel Galaxy, and Elite breathing new life into the genre.

But I haven't been playing any of those, because all my free time has been completely consumed by Freespace 2.

I will go out on a limb and say I think Freespace is the best space sim series ever created (fight me, Wing Commander). Originally released in 1998, it blended frantic action with ship customization and a halfway decent storyline. I've replayed both the original and its sequel a half dozen times.

But the actual games are only a fraction of the story. The real appeal of Freespace, and what has kept me coming back, is its community. Unusually, the games were made open source by their developers, Volition (they of Red Faction and Saints Row fame). This helped foster a fanatic modding scene that has been churning out custom ships, graphics improvements, and new campaigns for more than a decade. I played around with these mods in college and had a blast. (I remember one session where, after beating a single particularly sadistic user-made level, I looked up and realized it was 6:30am.) Unfortunately, the process of installing and enabling everything was fiddly and kind of a pain. 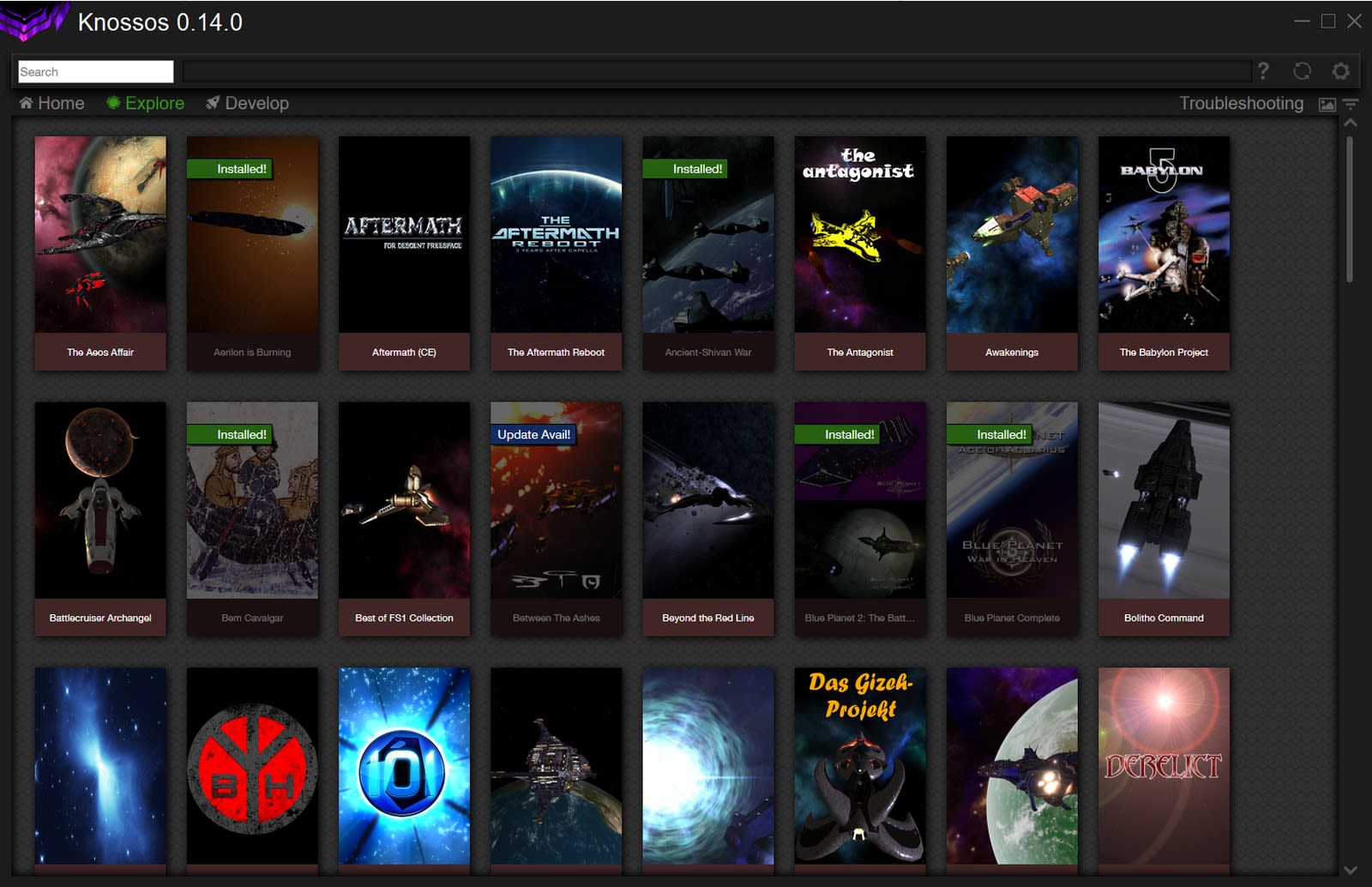 So I was absolutely overjoyed to learn that the Freespace mod scene, which congregates on the website Hard Light, had developed and released Knossos: an honest-to-goodness, Steam-esque launcher app that presents you with a cornucopia of user-generated content, all just a click away. Beyond the original games, there are dozens of custom made campaigns, some more than 20-missions long. Many of these expand on the original games with all new ships, weapons, even gameplay mechanics. (Fly a capital ship? Check. Space mining? Check.) It all comes with a fresh coat of graphical paint, adding high-res starscapes, modern glow and shadow effects, and better textures.

Does it look as good as a modern AAA game? Definitely not, but when you consider Freespace 2 came out 21 years ago, it's a massive improvement. And Hard Light isn't slowing down development, either: It released a new pack of graphical improvements (dubbed "MediaVPs") just two weeks ago.

The modded version of the games (or "FSOpen") also bring a swath of quality of life improvements, like widescreen support, the ability to change screen resolution, or have a mouse work properly. The mods aren't without bugs, but they're generally stable. The original game, great as it was, is nigh-unplayable these days in its un-modded state.

So how can you join in on the fun? First, you'll need a retail copy of Freespace 2 ($10 on GOG and Steam). And for newcomers, the original campaigns are available with updated graphics and they're still amazing.

I'd start with those to learn the ropes. Like most sim games, the control scheme for Freespace is extensive and complex, with dozens of hotkeys and at least 20 commands required for regular play. (Unlike many sims, this one probably plays best with a mouse, leave the flightstick under the desk.) Apparently these are all muscle-memory for me -- I was able to jump back into the action, simultaneously adjusting my shield power while cycling primary weapons, engaging afterburners and targeting the ship attacking my objective, without a sweat.

Beyond the original campaigns, dive into the mod work and try Inferno Nostos, The Procyon Insurgency, and Wings of Dawn (though skip the cringey, optional, NSFW files for that one). The best fan-made campaign and, one of the most impressive mods I've ever seen, is the staggeringly ambitious Blue Planet. It's essentially a whole new game, a pair of massive campaigns covering 50-missions with entirely new weapons and ships (and with serious Battlestar Galactica vibes). Or if you'd prefer full Battlestar, there's Diaspora, and Beyond the Red Line, a pair of multi-campaign total conversion mods set within the world of the Syfy Battlestar Galactica reboot. For fans of 90's space sims who feel left out, there's even a full fan-made Wing Commander game with 50 missions on offer. If you miss space sims at all, it's the best $10 you can spend.

All products recommended by Engadget are selected by our editorial team, independent of our parent company. Some of our stories include affiliate links. If you buy something through one of these links, we may earn an affiliate commission. All prices are correct at the time of publishing.
Easy-to-use mods brought me back to ‘Freespace 2’
art
Freespace
Freespace 2
gaming
gamingirl
Hard light
Knossos
mods
thebuyersguide