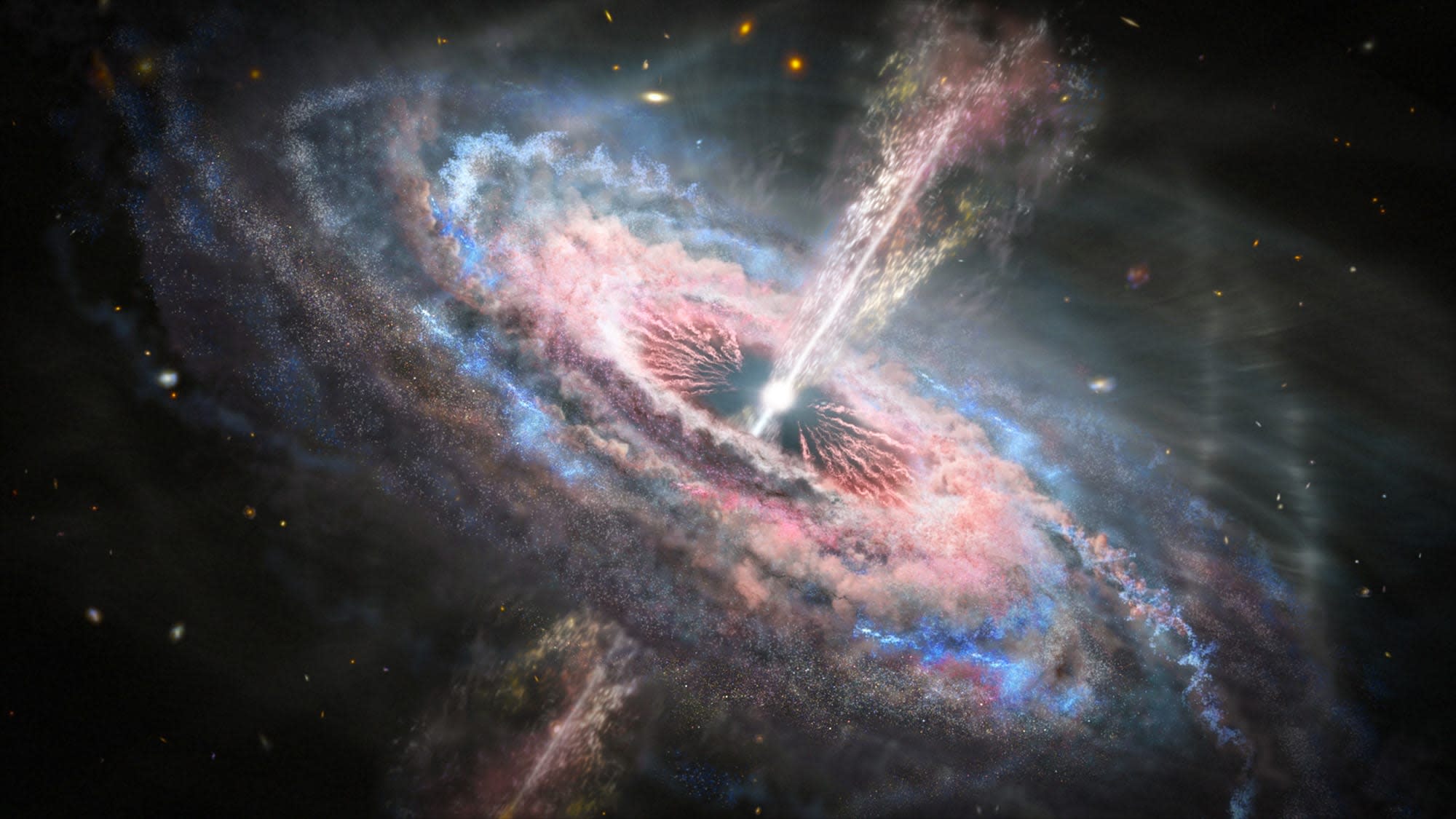 Powered by supermassive black holes that consume huge amounts of galactic material, quasars are some of the most energetic objects in the universe. How energetic? Some of them shine up to 1,000 times brighter than the galaxies that house them. Now, a team of astronomers has used the Hubble Space Telescope to examine several large quasars, and what they found was mind-boggling. Some quasars act like tsunamis, pushing 46-million-MPH winds that blast out hundreds of times the Sun's weight of material per year while creating ripples across entire galaxies.

Quasars happen when supermassive black holes suck in matter from their surrounding galaxies, spitting out jets of matter. They also heat the materials around them, creating superheated disks that blast out "winds" via magnetic and radiation pressure.

The aim of the team's project was to measure the amount of energy in those winds. That can be tricky as quasars tend to be very distant objects, with some as far as 10 billion light-years away.

That's where Hubble comes in. The space telescope has captured the best visible light photos of quasars, with one (below) showing the jet as a streaky object (above and left of the quasar) that's 200,000 light-years in length -- four times the radius of the Milky Way galaxy.

To measure the velocity of a quasar's winds, however, the team tapped another Hubble instrument called the Cosmic Origins Spectrograph (COS). It's the only device that can capture a specific range of ultraviolet light needed to measure the Doppler shift present in a quasar's outflow jets. That in turn can give scientists the speed and composition of those jets.

The scientists measured the jets on 13 quasars and found some pretty startling results. Some blasted out winds that "snowplowed" material away from a galaxy's center at several percentages of the speed of light. One quasar produced winds that started at 43-million MPH and hit speeds of 46-million MPH three years later, accelerating faster than any quasar yet.

"The winds are pushing hundreds of solar masses of material each year," said lead researcher Nahum Arav of Virginia Tech in a statement. "The amount of mechanical energy that these outflows carry is up to several hundreds of times higher than the luminosity of the entire Milky Way galaxy."

This phenomenon is shown in the artist's illustration at top, but it might look even more spectacular in real life. As the quasar's shock wave heats matter to billions of degrees, it would glow across X-ray and visible light spectra. "You'll get lots of radiation first in X-rays and gamma rays, and afterwards it will percolate to visible and infrared light," said Arav. "You'd get a huge light show -- like Christmas trees all over the galaxy."