When Spotify first launched its standalone app for kids last October, the possibilities were intriguing. It meant that parents could play music their kids like without having it impact their algorithmically generated playlists and recommendations on the service. There was one problem: it was only available in Ireland. In the months that followed, the company would expand to other parts of Europe (including the UK, where it arrived last month), Australia and South America. Now that the streaming service has had some time to refine things a bit, it's debuting Spotify Kids in the US, Canada and France today.

Spotify is clear that the app is still very much in the beta phase. It continues to focus on updating the software while keeping things safe and relevant for the younger audience. However, the goal remains to offer a separate app that not only looks more inviting for kids, but that offers human-curated content for them. And, importantly, their listening habits will no longer impact how their parents use Spotify. I can tell you as the father of a Kindergartener who gets obsessed with the soundtrack to every movie he sees (currently bumping Spies in Disguise daily), this is a welcome relief.

"Spotify Premium Family, now with Spotify Kids, helps families listen both together and individually," Spotify's chief Premium business officer Alex Norström explained. "Parents can reclaim their own Spotify libraries and all the personalization that they love, while their kids can develop a love for music and stories through an experience that's designed just for them."

The company says Spotify Kids is both COPPA compliant and ad-free. For those two reasons, the app has a separate privacy policy. There are no algorithms at work here: the library of content is reviewed by experts who have experience working with the likes of Disney, Discovery Kids and Nickelodeon. By design, the selections are limited to what that group has deemed safe for children. While the app does display recently played items atop the home screen similar to the regular app, there's no activity tracking that will serve up suggestions along the way. Children can save items to their favorites, but those selections must be made manually by tapping the heart icon throughout the app.

As you might expect, parental controls are a key component. A parent has to grant access via initial consent for a child to use the app. Each child that has their own profile counts towards that six-person limit ($14.99/month). Spotify says it will expand a parent's ability to customize the app and content to their child, but for now, the oversight includes allowing access and locking down settings with a PIN. Like other children's apps, that code will be required to make any big changes. For example, you'll need the number when your child is ready to switch from the younger option to the library for older kids. This code is set when you link your account and grant access. 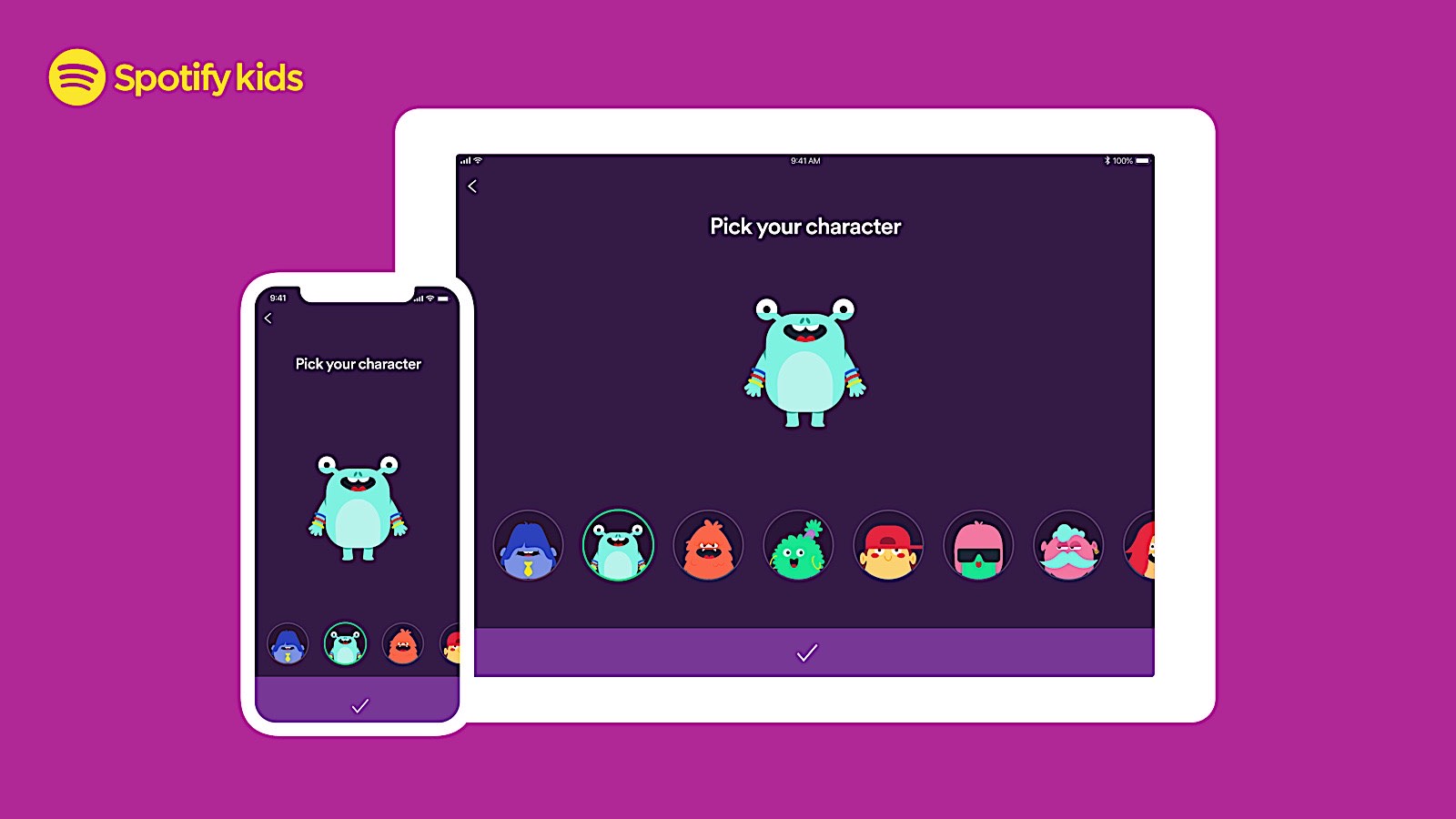 From there, you enter a name -- which can be anything, even just emoji -- and a birthday. The birthday isn't required, but Spotify says it will help with content curation. The company promises that the info is fully encrypted and will never be shared. Once you hand things over to your child, they can pick from one of a dozen characters that act as a profile image. Those illustrations also dictate the color scheme of the app, so switching it up will trigger further aesthetic tweaks. The artwork for younger kids is simpler and easier to understand while things get more complex on the 5-12 side. Colors also vary for moods. If a playlist is energetic, the art with be loud and bright, while something meant for bed time will be more mellow and muted.

"We heard loud and clear that both parents and kids are craving more content in the app, so we've been increasing the number of tracks available," Norström said. "We've also heard from parents that they want even more control of the content, so we are working on some exciting new features."

In terms of content, there are 125 playlists, over 8,000 songs and over 60 hours of stories. It's a mix of singalongs, soundtracks and more that spans topics like movies/television, top hits, learning, bedtime and others. There's even a "wash your hands" section complete with Baby Shark. Spotify says 50 percent of the content in each region is local. To help tailor the content to specific ages, the app is divided up for younger (0-6 years) and older (5-12 years) children.

Yes, podcasts are coming. That's not surprising, given the company's recent focus on episodic content. It's not quite ready to add those just yet, but it was clear they're on the way. Spotify was also sure to mention that it will constantly add the hottest new thing for kids. Right now, that means there are playlists for both Frozen and Trolls World Tour.

One of the key differences between the younger and older tiers is those top hits. The 5-12 age group will get access to a curated selection of popular songs that have been approved for language and other content. In other words, this group will be privy to the soundtrack from that latest Trolls movie, (some of) the music of Taylor Swift and more. And it's not just pop music, either. Spotify was careful to include other options like Spanish, country, Christian and Motown so kids can listen to the styles they like -- to a certain extent. 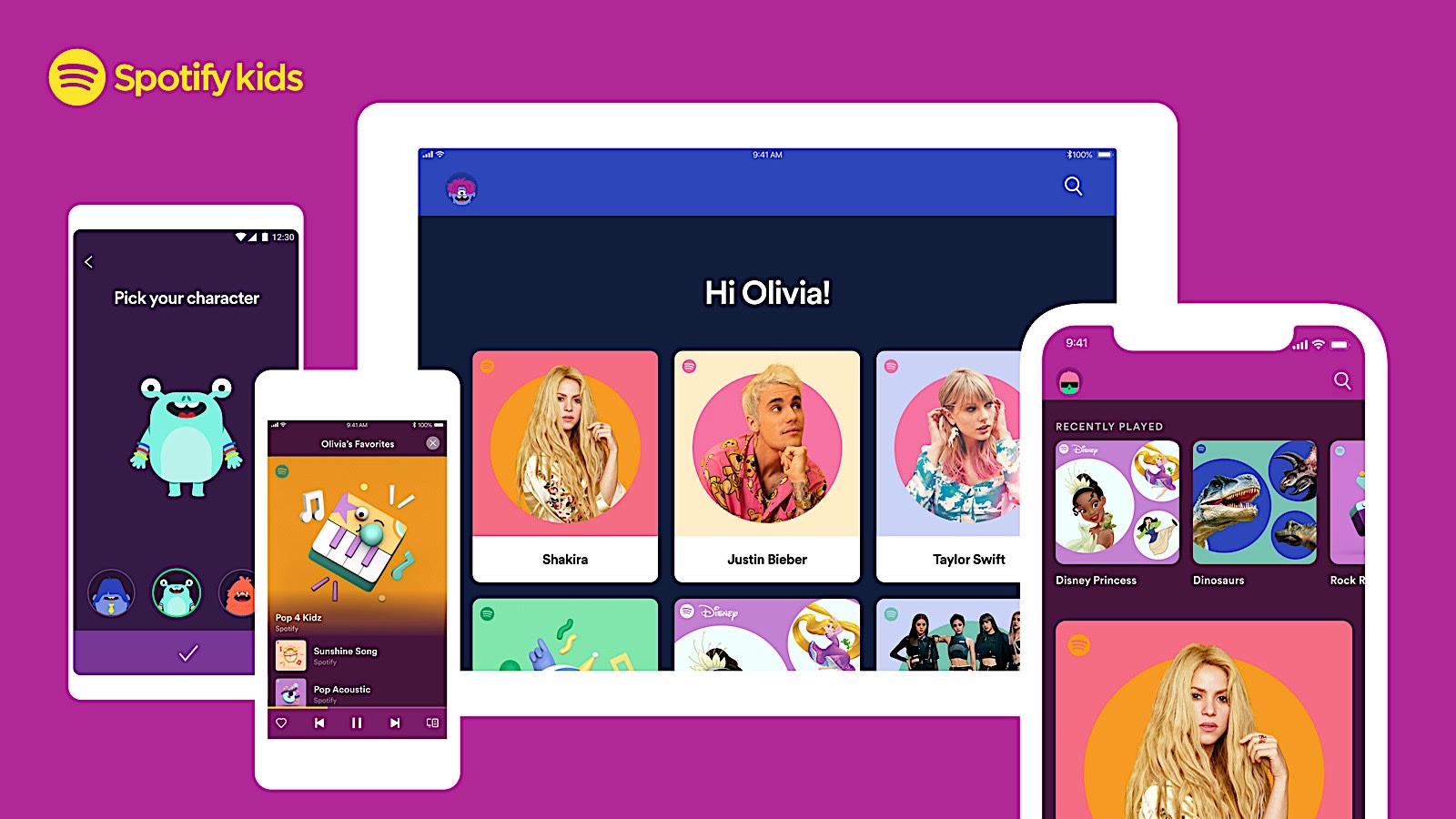 Inside, the UI looks like a children's app. The colors are bold and bright with a simplified interface that's easier for a younger audience to understand. There are a lot more images and a lot less words. In addition to the recently played section at the top of the main page, a stream of artist and playlist images comprises a card-like feed. It's much less intense than the combination of vertical and horizontal scrolling the main Spotify app demands in the same area.

The Explore section is available via the magnifying glass icon on the home screen. There's a search box, but it's organized like the Explore section in the regular app: a group of boxes with various options just a tap away. Of course, one of those is "Your Favorites." Spotify says songs that are saved (or "hearted") here will be available for offline playback. Search results are also organized like the main app, with top results, playlists, albums, songs and artists all popping up in response to a query.

Spotify Kids is now available on Android and iOS in the UK, Ireland, Sweden, Denmark, Australia, New Zealand, Mexico, Argentina, Brazil -- and as of today, the US, Canada and France. It's free for all Spotify Premium Family subscribers, but access is also exclusive to that plan. The service is currently offering a free month of Premium Family for new Premium subscribers.