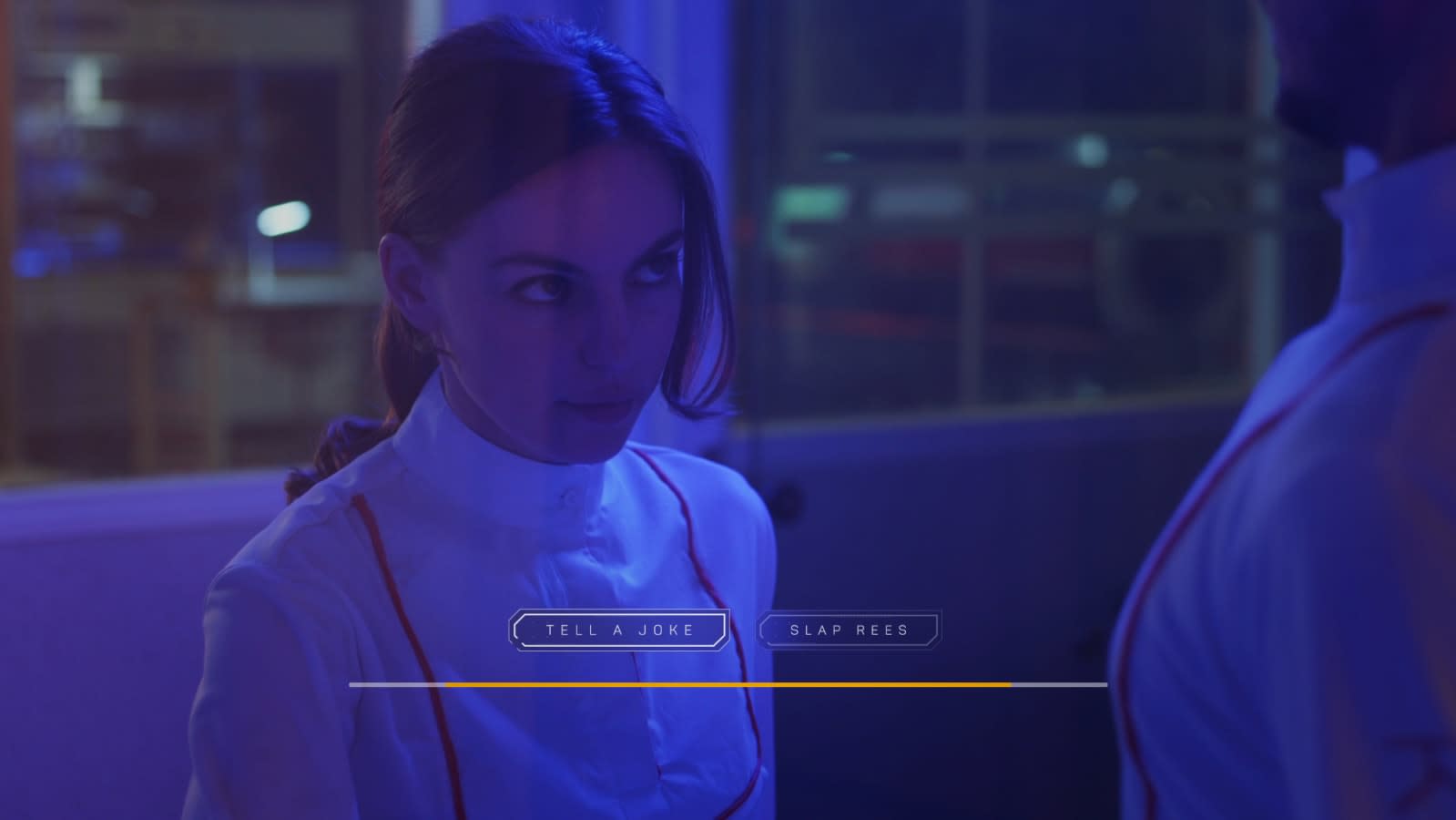 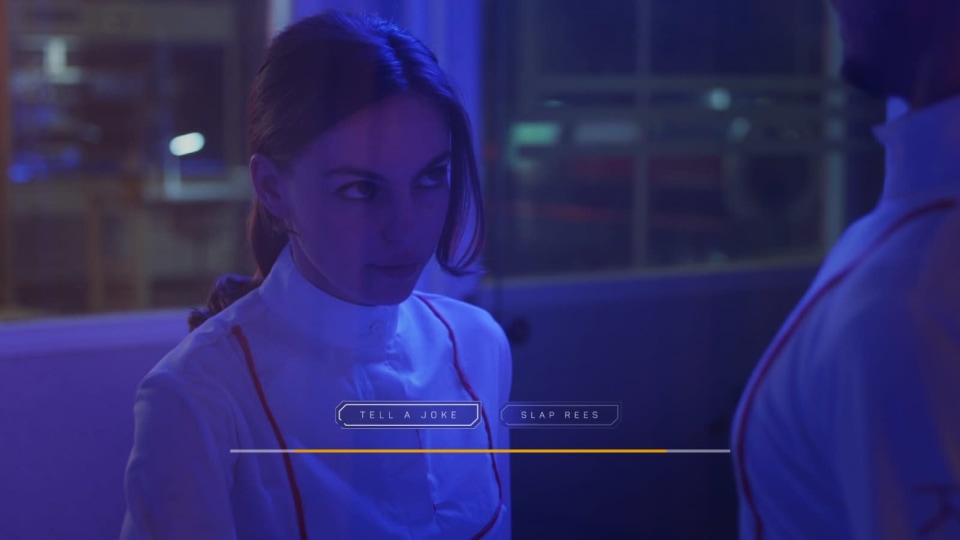 There are countless examples of the real world intruding on art, making something that was fine a day ago a grisly mistake now. The pilot episode of X-Files spin-off The Lone Gunmen, which aired six months before 9/11, featured a terrorist plan to fly a plane into the World Trade Center, for instance. And it's likely that The Complex, an interactive movie about dangerous biotechnology, skirts the same issue. After all, nobody wants to fixate on doctors in a life-and-death race against disease when there's a pandemic raging, do they?

Full-motion video (FMV) games, or interactive movies, have been around ever since the CD enabled PC games to use more than a few floppy discs' worth of data. Most histories mention Night Trap and Sewer Shark, both rescued from the failure of the VHS-based Control-Vision by Sega. Sadly, those two Mega-CD titles often drown out discussion of more interesting early PC titles, like 1994's Tex Murphy: Under A Killing Moon. That game combined FMV, virtual environments and a point-and-click detective game in a way that worked surprisingly well.

These days, no discussion of FMV games can begin without the obligatory mention of Bandersnatch, the Black Mirror special broadcast on Netflix. The interactive movie wasn't Netflix's first attempt at branching video, but it's certainly the highest profile in recent years. In the gaming world, these games have always bumbled along, catering to a small audience of fans. An outfit associated with FMV games is Wales Interactive, which previously made Late Shift and The Bunker, and is now behind The Complex.

"After a major bio-weapon attack on London," says the game's blurb, "two scientists find themselves in a locked-down laboratory with time, and air, running out." That's actually a little bit of a misdirect, but I don't know if that was intentional on the part of the studio or an error.

You play as Dr. Amy Tennant, a doctor who previously helped save lives during a civil war in a fictional Asian nation that probably isn't Myanmar. After you learn you can't save everyone, you now work as a nanotechnologist working on a miracle cure to save... everyone. But things in your perfect life go awry at the, uh, complex in which you work, and the nanotechnology you're working on gets out.

For reasons I won't go into to avoid spoilers, you're locked in a bunker below the building in a race against time to escape alive. With enemies both inside and outside, can you prevent a pandemic, save a life and get out before the air runs out? Well, the game doesn't really focus on those questions -- and the idea of actually doing any medicine is quickly forgotten. In fact, Dr. Tennant spends a lot of time standing around saying that she wants to save her patient, but never actually does anything that might help.

You wouldn't call the story muddled, but it does make some interesting choices about how it sets up its tale. After all, with doctors racing to (ostensibly) save a person's life, there's a lot of time spent having video chats about how important it is to get working. But the broader backstory, focusing on the not-too-vast conspiracy that prompts the crisis, gets far more attention.

Like Bandersnatch, the PS4's Until Dawn and its ilk, the game offers you a number of decisions that you'll need to make under time pressure. Those decisions will apparently affect the outcome of the game, as well as your relationships with each of the main and incidental characters. Depending on how you play it, your friends will become foes and vice versa, or at least that's the plan.

From my playthroughs, that doesn't seem all that true. The story hit the same beats no matter what I did. In one run, I did everything I could to alienate a character, and they were still prepared to sacrifice themselves for me by the end. You can check how much a character likes you at any point by hitting (in my case) the PS4's touchpad. And whatever those metrics showed me, it didn't seem to radically alter the outcome of the game.

This is the brick wall that a lot of FMV titles wind up running into: the limits of what the storytellers can produce. A number of decisions that I tried wound up directing me to the same destination to push the story along. Several of my choices were instantly overruled by other characters or became redundant as soon as I'd made them anyway. One example: There are two video clips on a USB drive you're meant to choose between watching. Either way, another character will immediately cue up the other one straight after.

My initial playthrough took around 90 minutes, but subsequent ones (thankfully, you can press R1 to skip a clip you've already seen) cut it to 30. Playing it in this abbreviated state serves to highlight how few moments actually make a real difference to the plot. It doesn't help that some of the endings take sharp left turns that make little sense with relation to the game you've been playing. Imagine Little Women, but with a John Woo-style gunfight tacked on the end for reasons.

The Complex does deserve praise for making the most out of its presumably limited budget. Whereas older FMV games couldn't stretch to extravagances such as chairs, this is very competently made. You'd not blink if you saw this going out as a weekday night drama on TV for the bulk of its runtime. It's only towards the end, where digital effects are very obviously used in place of real ones as a cost-saving measure, do things get shakier.

And it's hard to criticize the game's acting and staging too much because the nature of an FMV game is for lots of awkward pauses and talking to camera. Sadly, the slightly stagey nature of those titles is a feature rather than a bug, and it's a tough job to make it feel more natural.

Fundamentally, it's a mostly entertaining way to spend $13, and an evening, but I doubt that you'll feel too compelled to find all nine endings unless you're a real obsessive.

The Complex is available on Steam, PlayStation Store, Microsoft Store and Switch Store.

In this article: av, complex, fmv, fmv game, gaming, night trap, the complex, wales interactive
All products recommended by Engadget are selected by our editorial team, independent of our parent company. Some of our stories include affiliate links. If you buy something through one of these links, we may earn an affiliate commission.