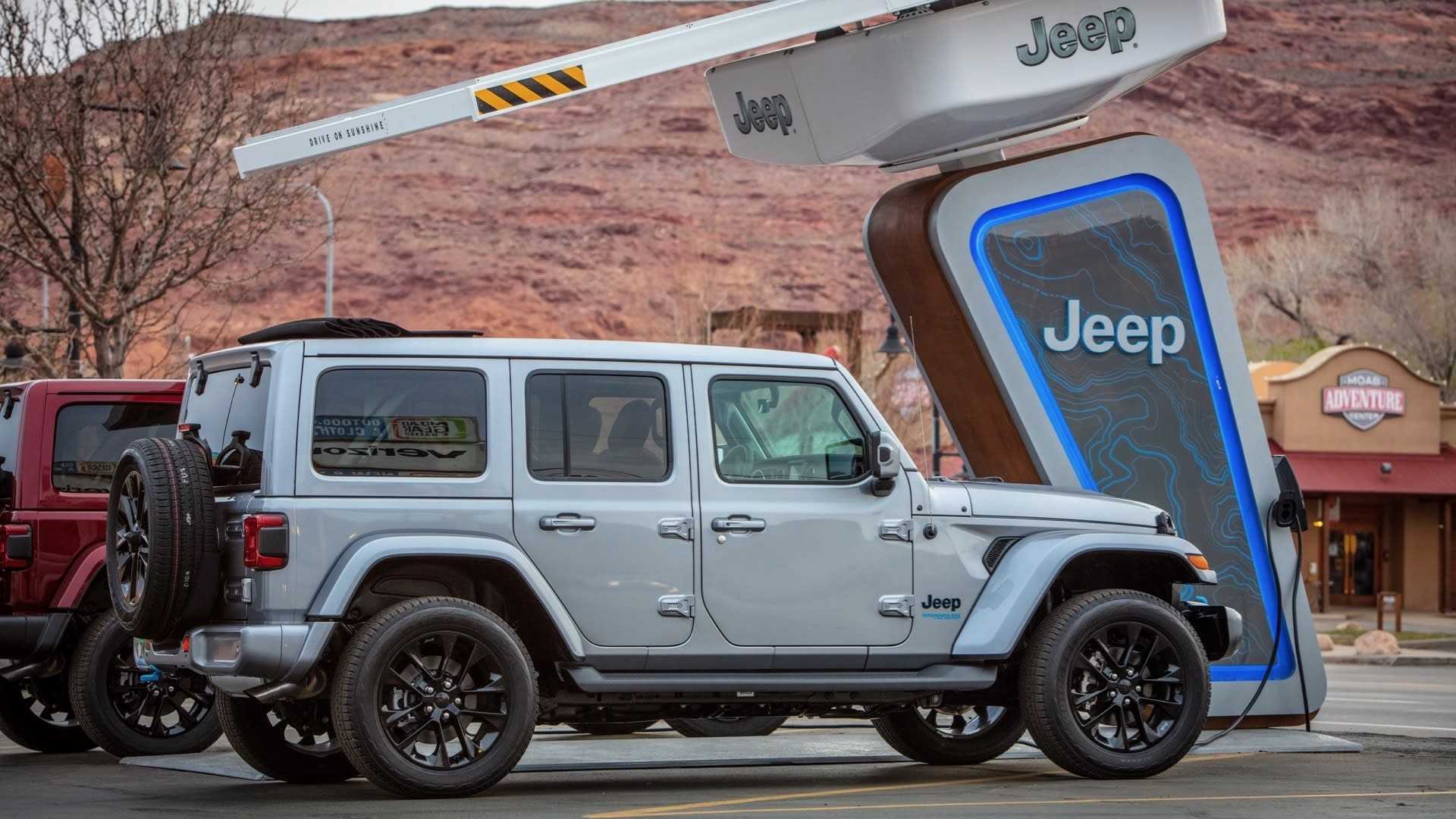 Jeep shoved an hybrid electric engine in a Wrangler and doubled its mileage.

The first car I ever owned was a run-down 1985 Jeep Grand Cherokee that I bought for $600. The thing was a glorious mess; the only accessory that wasn’t analog was the dashboard clock and that never did anything but flash “12:00.” But the state of technology has advanced by leaps and bounds since the dark day of the mid-'80s and, thankfully, a whole bunch of it has found its way into Jeep’s first PHEV, the trail-blazing 2021 Wrangler Limited Sahara 4xe.

The introduction of the 4xe marks another expansion of the Wrangler’s drivetrain options. For the 2021 model year, prospective buyers have myriad internal combustion options including a 3.0L V6 diesel, a 3.6L V6 petrol and a gigantic 6.4L V8. The 4xe, on the other hand, is powered by a petite 2.0L supercharged I4 and augmented by a pair of electric motor generators driven by a 17kWh battery pack. Together they produce 375 horsepower, 470 lb.-ft and 370-mile range while delivering 49 mpg-e — nearly double the 22/29 mpg that its ICE variants can muster — though without help from the e-motor, the 4xe’s efficiency drops to around 20 mpg.

The 4xe’s primary motor generator sits at the front of the engine block and is used to augment the engine’s performance as well as keep the battery pack topped off while driving. The second motor generator sits in front of the transmission with a binary clutch separating the motor from the engine — where the torque converter normally sits. This is what enables the 4xe to use Electric-Only mode, since there aren’t any actual mechanical connections between the two systems aside from this clutch. When the clutch is open, it’s electric only. When the clutch is closed, the ICE and EM work in concert. And, interestingly, while it does have a 12V battery to run the vehicle's various accessories, the 4xe does not need a 12V starter motor like its fully-petrol alternatives do, meaning it turns on and off silently like an EV. (This also means that you can run the accessories all day and never worry about running down the powertrain battery since they’re all run off the separate 12V, that’s clever.)

Those motors are powered by a 400V, 17kWh 96-cell battery pack tucked under the rear seats. It uses an NCM (nickel-cobalt-manganese) chemistry, the cobalt-heavy predecessor to the NCMA mix that GM’s Ultium system employs. And while it can’t hit the high-charging speeds that, say, the GM Hummer EV, with its 800V architecture, enjoys, the 4xe’s battery is compact enough that it can be fully replenished with two hours on a Level 2 charger or in 2.5 hours by just driving around at freeway speeds, letting that primary motor generator work its magic. What’s more, the 4xe’s regenerative braking system can also harvest up to a quarter G of momentum every time the vehicle stops while extending the service life of the XEs brake pads — double that when 4WD is engaged. There’s even a selectable Max Regen mode which is basically regenerative braking in overdrive — expect less coasting and firmer stops when you’ve got it engaged.

Since the 4xe is designed to go off-roading and is Trail Rated — which includes a skid plate and front and rear tow hooks — the battery pack has been hardened in an aluminum case and waterproofed to endure fording up to 30 inches of water.

Drivers will be able to adjust the interplay between the electric and IC powertrains using a trio of buttons located to the left of the steering column, collectively known as E Selec. Yes, that is spelled correctly. Choose between Hybrid mode, which runs on electric power alone (a whole 20 miles of range!) until the battery is depleted before letting the engine kick in to help, Electric Only mode which is exactly what it sounds like, and eSave which is the opposite of Electric Only — running on gas power without engaging the electric side. You can very much tell when the electric motor is on, and I don’t just mean by the lack of sound. It’s like driving two different vehicles. In gas-only mode you feel every ounce of the roughly 4,000-pound vehicle and can hear the superchargers screaming when accelerating hard. Electric Only mode makes the Wrangler feel light as a feather and stiff as a board but barely gets me from my house to the far side of the Bay Bridge before running out of juice.

The 4xe will come in three trim levels: The Sahara 4xe, which is what I drove, starts at $47,995 (though the one in the video will set you back $54,000 with its various add-on packages); the stepped up Rubicon 4xe starts at $51,695, and the top-of-the-line High Altitude 4xe goes for $53,815. Those are quite a bit pricier than the $28,900 that this year’s ICE Wranglers start at. Buyers will have the choice of ten exterior colors, two interior color/material alternatives, and the option for a manually-convertible soft top, three-piece hard top or “one-touch” power top, which is a soft top sliding over hard side and rear windows. Side note: Why is the soft top so damn difficult to put on and take off? I feel like I need an engineering degree and three lifelines to get this thing correctly installed with any regularity.

The 4xe stays true to the Wrangler style with a boxy exterior and tall ride height — you’d be hard pressed to spot the difference between the PHEV and an ICE version from any appreciable distance. One design flair I very much appreciated however is that both the power outlet and fuel filler port are located on the same side of the vehicle — the power outlet sits in front of the driver’s door, the gas port is behind the rear passenger’s door — which means that if you can remember where either of them is, you will know where both of them are, saving you time and embarrassment when trying to navigate unfamiliar gas stations and charging centers.

I am utterly enthralled with the 4xe’s interior, if only for the buttons. Oh, the glory of physical switches and rubberized knobs in an era of multi-level menu trees, taps and swipes. Yes, you can still go through the 8.4-inch touchscreen to activate the climate controls and optional seat heaters — it’s also how you access the vehicle’s “Eco Coaching” pages, which illustrate to neophyte hybrid owners how to get the most out of their batteries. But why bother when activating the front and rear defrost, turning on the AC and adjusting the blower temperature can be done with three button clicks and a roll of a knob, without ever taking your eyes off the road?

That’s not to say the 4xe’s infotainment system is in any way deficient, it’s actually one of the more intuitive and user friendly interfaces I’ve used in recent memory. Pick one of the seven main functions from the bottom row of the screen — that would be media, climate, controls, apps, nav, phone, and e-hybrid — and then use the buttons provided on that screen to do what you need to do. Everything is clearly labeled and easy to understand.

In terms of connectivity, the 4xe is essentially a rolling office. It offers Android Auto and Apple CarPlay integration — the screen mirroring versions, not “the assistant lives in your infotainment unit” like with the Polestar 2 — as well as Uconnect, Bluetooth, an Alexa Skill, and even 4G LTE WiFi for up to eight devices. Oh, you want some ports? The 4xe has your ports right here: there’s a 12V lighter adapter, USB, USB-C and Aux port in the center console; a secondary USB-C in the center, under-armrest storage; two more USB-C ports and even a grounded 110V outlet in the back seat.

Really the only things that bugged me about the 4xe’s interior were the window controls, which are oddly located just South of the infotainment screen, and the rear cargo area which would be hard-pressed to hold a week’s worth of groceries. Seriously, you’re going to either need to Marie Kondo your luggage or break out the old Astro Van if you want to take a family of four on an extended road trip. I did also notice that, while there was plenty of headroom in the back seats, leg space was at a premium, especially with the front seats pushed all the way back. Still, if I’m going to be going mudding in this thing, I’m going to want as many brace points I can get my hands and knees on, really it’s a bit of a win-win.

So whether you’re looking to go a little green during your next day at the OHV park, need a rugged ride for silently escaping the inevitable zombie apocalypse, or just want a sporty compact SUV that isn’t going to bankrupt you now that gas is $4 a gallon on both coasts, give the Wrangler Unlimited 4xe a look.