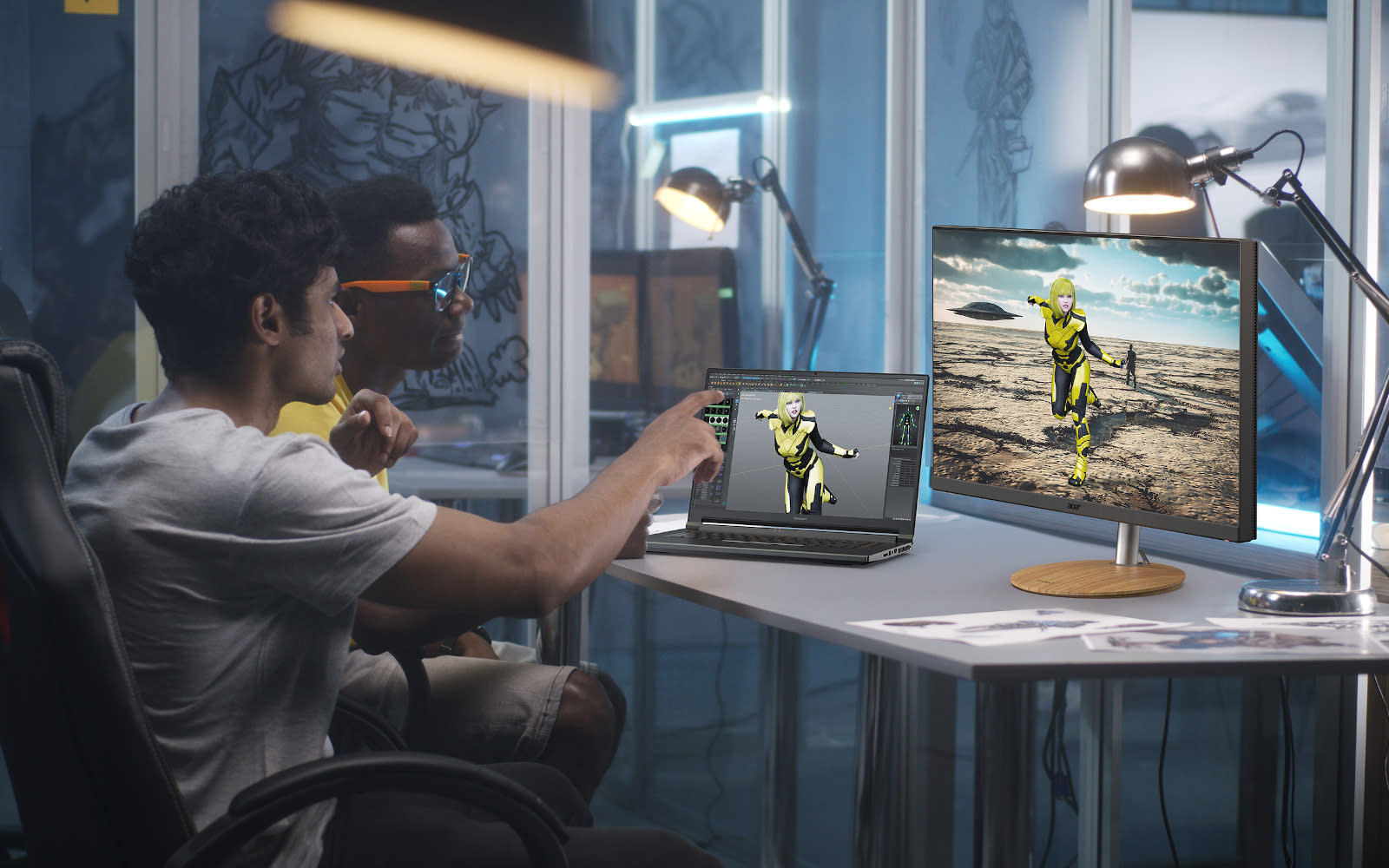 The ConceptD 5 notebooks will be the first to arrive in North America in August.

Acer has given its ConceptD creator notebook lineup a refresh, equipping the latest models with Intel's 11th-gen H-series processors. The new processors announced just earlier this month were designed to power gaming laptops and devices meant for heavy use, and they promise up to a 19 percent speed improvement over their predecessors. Acer's upgraded ConceptD 5 notebooks pair the H-series processors with the NVIDIA GeForce RTX 3060 laptop GPU, which has ray tracing capabilities. They can be purchased in configurations with up to 64GB of RAM and up to 2TB of SSD storage, and they feature a 16-inch 3K display with 16:10 aspect ratio.

The ConceptD 5 notebooks are capable of handling 4K videos, 8K editing, multi-app workflows, multiple displays, as well as 2D and 3D software rendering programs. They come with several connectivity options, including two USB Type-C ports, Thunderbolt 4 support, HDMI 2.1 and an SD card reader. Acer is also releasing a ConceptD 5 Pro notebook with either the NVIDIA RTX A5000 or the RTX A3000 GPU instead. Since both are pro-level graphics cards, the option will cost buyers more than the non-Pro ConceptD 5 laptops.

Meanwhile, the ConceptD 7 Ezel convertible notebook has also been updated with Intel's new 11th-Gen Core i7-11800H processor and NVIDIA's GeForce RTX 3080 laptop GPU. It has a 15.6-inch 4K display and comes in configurations with up to 32GB of RAM and up to 2TB of SSD storage. The convertible device has float, share, pad, stand and display modes, thanks to Acer's flexible hinge design, and it comes bundled with a Wacom ER pen. Like the ConceptD 5, the ConceptD 7 Ezel also has a pro version that's powered Intel's Xeon W-11955M processor with NVIDIA's pro-level RTX A5000 or A3000 GPU.

The ConceptD 5 laptops will be the first to become available in North America. They're arriving in August with prices starting at US$2,000, whereas EMEA buyers can get one as soon as July for at least EUR 2,199. The ConceptD 7 Ezel convertible will hit North America, EMEA and China in October with prices starting at US$ 2,499, EUR 2,699 and RMB 29,999, respectively. Meanwhile, the ConceptD 3 laptops (EUR 1,299) will arrive in EMEA in September. Its convertible sibling, the ConceptD 3 Ezel, will be available in North America in December and will set buyers back at least US$ 1,600. Buyers from EMEA and China can get it starting in September for EUR 1,499 and RMB 12,999.

All products recommended by Engadget are selected by our editorial team, independent of our parent company. Some of our stories include affiliate links. If you buy something through one of these links, we may earn an affiliate commission. All prices are correct at the time of publishing.
View All Comments
Acer upgrades its ConceptD laptop line with Intel 11th-Gen chips