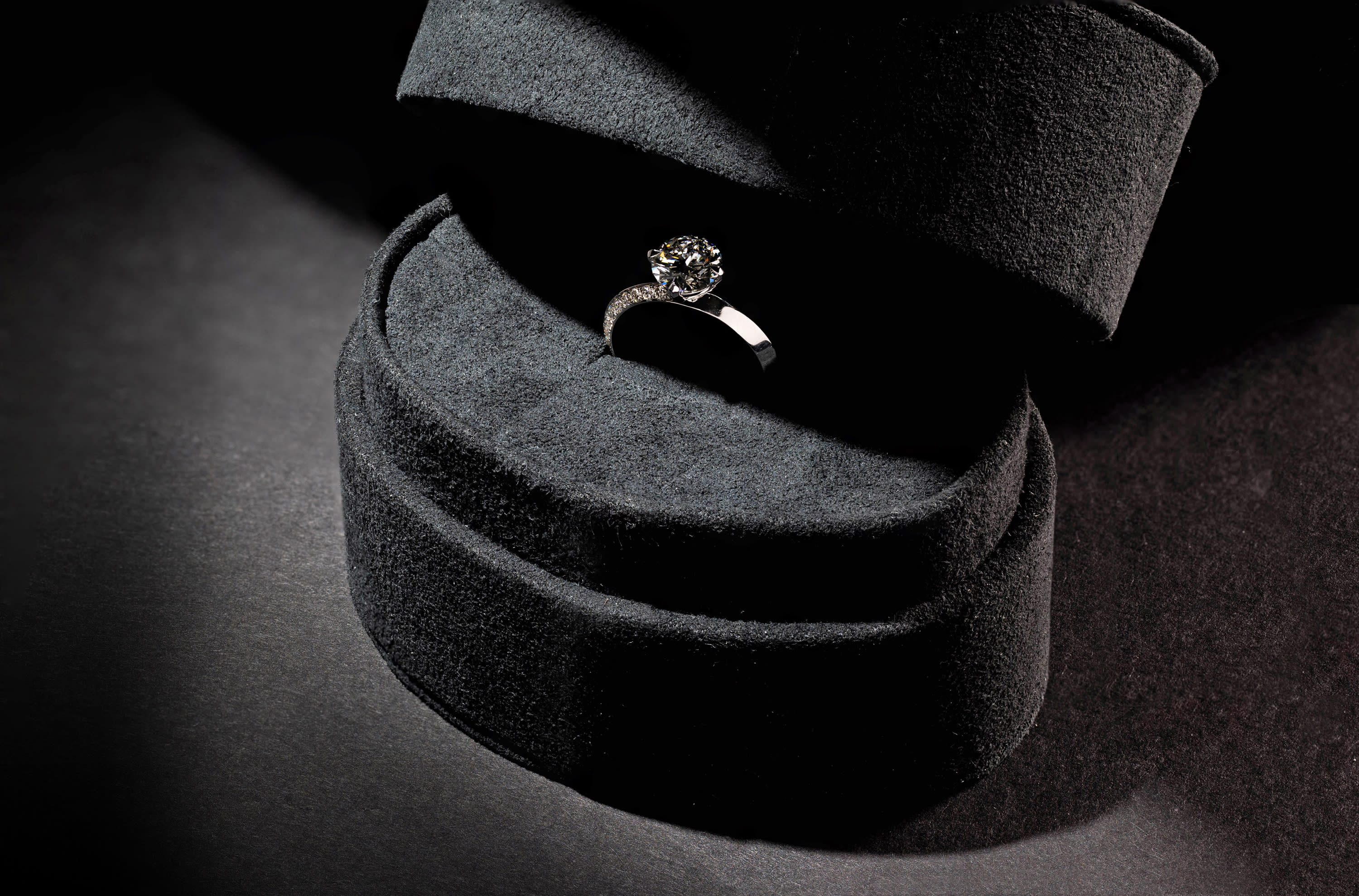 The future of diamonds is in recaptured CO2 pollution

They're a greener, less expensive alternative to conventionally mined stones.

Diamonds haven’t always been a girl’s best friend. Before the 1930’s, they were no more synonymous with weddings than opals, rubies and sapphires which had been routinely used in engagement rings for centuries. It really wasn’t until DeBeers -- the South African mining company which has historically controlled around 85 percent of the international diamond market -- launched its "A Diamond Is Forever" marketing scheme in the 1940s that demand for the sparkly stones skyrocketed.

An estimated 142 million carats of rough diamonds were dug out of mines worldwide in 2019 -- often at reprehensible environmental and human costs. Pulling just one carat of diamond out of the ground demands workers to move close to 100 square feet of soil, resulting in nearly 6,000 pounds of waste material and up to a ton of released carbon dioxide. Strip mines, such as the Mir mine in Eastern Siberia below, can be seen from the ISS.

“I don’t need science to tell that [lab-grown diamonds] is less bad than [the Mir mine in Siberia],” diamond merchant Alexander Weindling told The Guardian last March. “My eyes tell me that’s a lot worse for our planet. We don’t need to dig these huge holes in the earth any more that are visible from space. We used to hunt whales. We don’t do that anymore do we?”

In Africa, where 65 percent of the world’s diamonds are produced, mines routinely employ child and teen laborers at slave wages in dangerous working conditions. The practice grew so egregious in recent decades that in 2003, the international community had to establish the Kimberly process to help prevent so-called “blood diamonds” -- those produced in war zones and whose sales funded those fighting efforts -- from reaching market. However the process is riddled with loopholes which have largely defanged its enforcement.

“Today, if you have a child working for $3 a day doing backbreaking work waist deep in a river sifting for diamonds, that's called ‘artisanal mining,’” Ryan Shearman, Founder and CEO of Aether Diamonds said in a recent call with Engadget. “It's not called child abuse, and that skates through the Kimberley Process because the proceeds from that diamond sale didn't go to fund a local warlord.”

The natural diamond industry has also faced a series of economic challenges in recent years including a glut of inventory in 2019 -- despite diamonds’ values constantly being touted as due to their “rarity” -- and the COVID-19 pandemic, which saw demand for diamonds plummet in 2020. Prices for high-quality 1-carat stones still managed to rise about 12 percent in 2020, year over year, however lower quality and smaller size diamonds have seen their values drop between 15 and 27 percent over the same period.

"If you are in that top end, the demand is still there because the people who go for these types of goods feel the pressure of the market downturn less," Gus Simbanegavi, CEO of Bluerock Diamonds BRD.L, told Reuters.

That sure seems like a lot of trouble for a material we’ve known the atomic makeup of since 1797 and have been able to grow under laboratory conditions for nearly 70 years. General Electric was the first company to commercialize the process. In 1941, GE partnered with the Norton and Carborundum companies and managed to heat carbon samples to 5,430 degrees F at pressures in excess of 510,000 PSI before it temporarily paused the project for WWII. The program resumed in 1951 and, by 1954, had succeeded in creating the first commercially viable lab-grown diamond. Those first few batches were sold as heatsinks for electronics for use in research. Gem-quality lab-grown diamonds wouldn’t arrive in jewelry displays until the 1980s.

These days, diamond labs around the world grow more than 100 tons of the mineral annually. “They're identical [to natural diamonds] at the atomic level,” Shearman said. “They have the exact same chemical, mechanical and optical properties, and there's not a human being on the planet that can tell the difference. The only way you can do so is by essentially running a chemical analysis -- and lab grown diamonds are in fact more pure than what comes from the ground.”

Aether’s products are especially unique given the novel method of their creation. “We are utilizing direct air capture technology to pull harmful atmospheric CO2, Shearman explained. “We then take that through a bit of modern alchemy, and the proprietary manufacturing process we've developed, to turn it into gem grade diamonds.”

Each one of the air capture reactors Aether uses is reportedly able to absorb up to 50 metric tons of carbon dioxide per year, however the company has pledged to suck 20 metric tons of CO2 -- that’s more than the 16 metric tons your average American generates in a year -- for every carat of diamond that it produces. From start to finish, growing such diamonds takes around 12 weeks in total.

“The problem with most lab grown diamonds, other than Aether diamonds, is that they still need to source their carbon from somewhere,” Shearman said. “Oftentimes, that comes from fossil fuels which is obtained via drilling and fracking. And so, as much as lab grown diamond brands out there claim to be sustainable, a lot of it I'm afraid is greenwashing language, because even if they're using environmentally friendly power (which most of them aren't) they're still relying on fossil fuels for their carbon and that's a finite resource.”

The company is careful in where it sources the rest of its materials as well, from the metal used in setting the stones to the packaging that they’re shipped in. “We either use ultrasuede that is created from plant biomass or we use New Zealand wool for inserts in our ring boxes,” Aether CMO Robert Hagemann added. “And then [we use] all FSC certified interior cardboard structures for our pieces. We also do carbon offsets for the logistics.”

In addition to being more ecologically friendly, Aether’s grown diamonds are far less expensive than their natural counterparts. That means that even at the low end of the market, say, a diamond solitaire ring that would cost $13,000 to $15000 at the Zales in your local mall would only set you back just $7000 were the gems made in Aether’s lab.

Aether’s efforts could have a disruptive effect on the global diamond market, an externality that the company is hoping for. “If we take more market share, it's going to put those types of companies that are abusing these people out of business,” Hagemann said. “That's good and bad. It's good because it ends something that probably shouldn't be happening to begin with,” but bad because the formerly exploited workers are now out of a job.

To counter this, the company is looking to work with NGOs and nonprofits on retraining efforts or perhaps “establishing a footprint for solar power generation... there's a lot of different ways we can come in and have a positive benefit in areas that have had this historical negative impact,” Hagemann said. “That's a big goal for us.”

Looking ahead, Hagemann and Shearman hope to make Aether’s entire operation -- not just its diamonds -- carbon negative by 2023. To do so, the team plans to vertically integrate its various stages of production. “The more we control around our supply chain, the better off we'll be with limiting our overall carbon footprint,” Shearman noted. The company also hopes to start employing wind as a power source, “being able to integrate sustainable power generation on site is something that we've talked about since the earliest days of the company.” Eventually Aether wants to reach a level of efficiency where the company can push any excess energy production back to the local municipal grid.