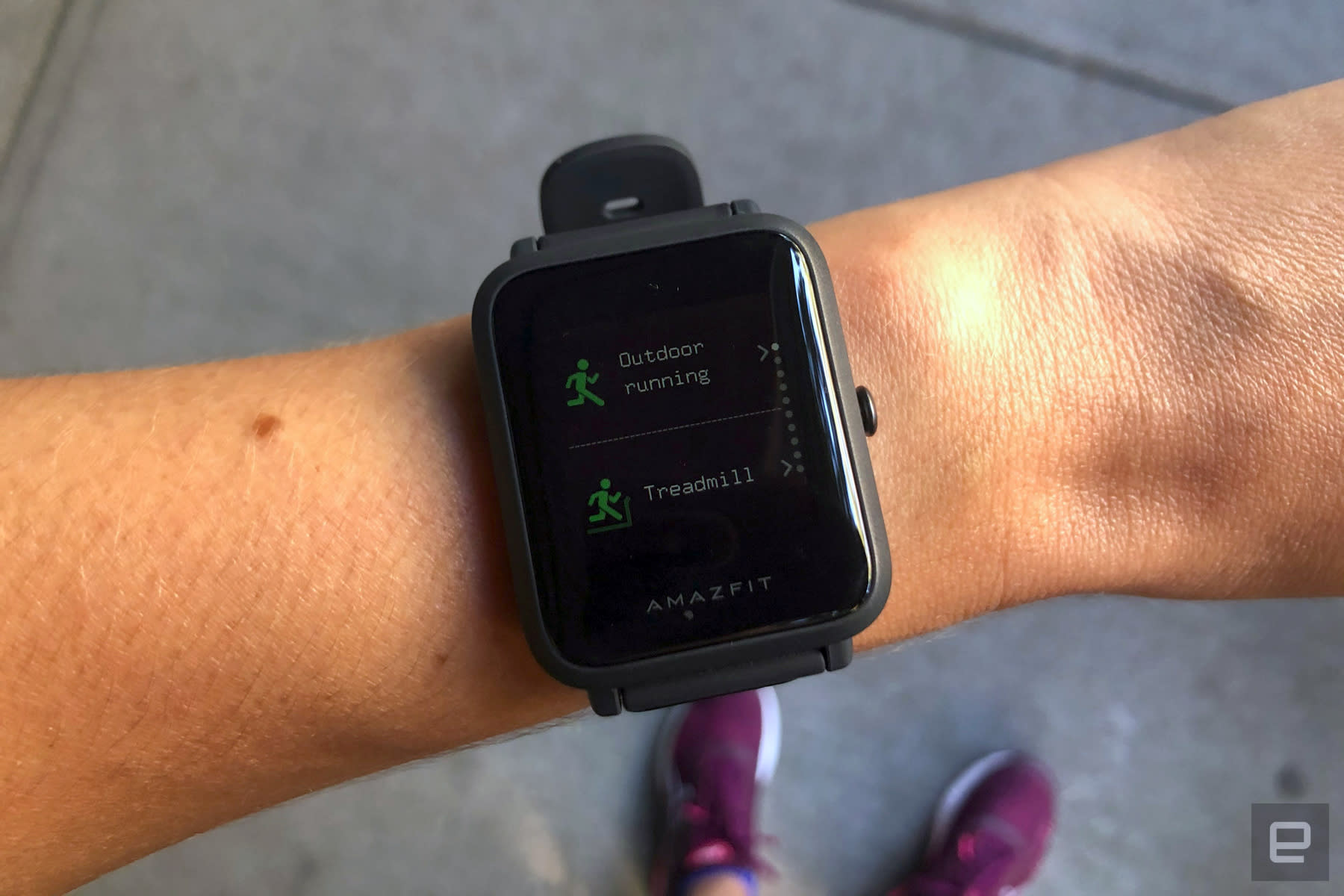 Amazfit Bip S review: How good can a $70 running watch be?

This budget GPS watch comes with loads of trade-offs, but it excels in the areas that matter most.

D. Wollman
@danawollman
September 9, 2020 9:30 AM
In this article: commerce, amazfit, huami, running watch, smartwatch, GPS watch, amazfit bip s, bip s, thebuyersguide, review, gear
All products recommended by Engadget are selected by our editorial team, independent of our parent company. Some of our stories include affiliate links. If you buy something through one of these links, we may earn an affiliate commission. All prices are correct at the time of publishing.

It’s no secret that when Engadget chooses which products to review, we usually go for the top of the line. But sometimes, we pick stuff because it’s cheap or seemingly a decent deal. This is one of those cases. The Bip S is a $70 smartwatch from the budget brand Amazfit. It offers built-in GPS, an optical heart-rate sensor, basic smartwatch notifications, sleep tracking, water resistance and a battery rated for up to 40 hours on a charge. Not bad for under $100.

This probably won’t come as a surprise, but there are compromises aplenty. And yet, after a week of wearing it I feel comfortable recommending it, albeit with some caveats. If you’re primarily in the market for a smartwatch, the trade-offs here probably aren’t worth the bargain-basement price. But if all you want is a cheap sports watch for exercising, the Bip S suddenly becomes much more compelling.

Like so many smartwatches, the Bip S is Apple Watch-like in principle, with a square screen, silicone strap and a button on the right side that, in Apple-speak, would be called a Digital Crown. Of course, this is a $70 watch, not a $399 one, which means you’ll need to adjust your expectations accordingly. The included silicone strap feels stiff, while the 1.28-inch, 176-x-176 screen is framed on all sides by some chunky bezels. The watch, available in four colors, is delicate enough that it never seemed out of place on my small wrist. It’s not exactly pretty, though.

Then again, the display is always on -- a feature the Apple Watch didn’t get until five years in. And while the polycarbonate Bip S feels a little cheap, it’s hard to argue with its lightweight build: just 31 grams, or 1.1 ounces. It certainly feels lighter on my wrist than the Garmin Forerunner 645 Music I normally wear. The screen is also clad in Gorilla Glass and a fingerprint-repellent coating. To its credit, the display stayed scratch-free during my testing.

It’s also worth noting that as cheap as this watch is, it has an optical heart rate sensor, which is amazing when you consider that some of the other devices in this price range are basic fitness tracking bands.

The watch is also rated for 5 ATM water resistance, which means it can withstand the equivalent of 50 meters of water pressure. In layman’s terms, the watch should do just fine for swimming, let alone baths. I don’t have access to a pool where I live, but I did take the watch into the shower with me and had no issues.

At a glance, the screen’s dull colors and tiny font add to that air of cheapness, but then you remember that transflective TFT display is actually crucial to achieving long battery life. Huami, the company that owns the Amazfit brand, claims the Bip S can last up to 40 days on a charge, or 22 days with continuous GPS use. The company adds that 15 days is probably more realistic under what it calls “typical” usage conditions.

I didn’t have 40 days to test this review, and 22 hours of nonstop running seemed unrealistic, but I can say that after a week of use and five runs, I still had 74-percent battery capacity. This would also be a good time to mention that the seemingly muted screen was unfailingly easy to make out, even in the middle of the afternoon on a sunny summer day,

Ultimately, it’s less the hardware that makes the Bip S feel cheap but the software -- specifically, a combination of the app design and device firmware. Not all of the watch faces are available with a US-friendly 12-hour clock. You can only input your height in centimeters. Even if you choose miles over kilometers, the mile alert you’ll see throughout your jog still refers to your pace “in the last km.” There’s no progress bar when you install firmware updates. You can only link to two third-party services -- Strava and Apple Health -- and if you log into Strava using Facebook, you’ll see a warning that Zepp’s built-ini browser is not supported. Throughout, the app and firmware are riddled with awkward translations and some peculiar punctuation choices.

As it happens, Huami is listed on the New York Stock Exchange in the US and claims to be the first Chinese “smart hardware company” to enter the American market. But to a user who hasn’t heard of Amazfit, much less Huami, goofs and inconsistencies like these could confer an air of illegitimacy.

It’s a shame too, because the underlying hardware is quite comprehensive for a $70 device. It can track steps, distance, pace, sleep quality, heart rate, calorie burn, cadence and stride length. At its best, the Zepp app displays this info on one tidy screen, complete with colorful graphs and maps. Those maps even use a red-yellow-green scheme to show where along your route you sped up or slowed down. It’s a shame the rest of it feels a little scattered.

In particular, the settings menus could use some streamlining. When you launch the app there’s an “Enjoy” tab on the bottom where you can set an alarm or event reminder; follow friends; set step, weight, calorie and sleep goals; change your watch face; and adjust incoming call and app notification settings.

But there’s also a “Profile” tab on the bottom of the homescreen, where you can check on your goal streak and the watch’s battery life; view records and friends; add third-party accounts; and switch between imperial and metric units. In that same menu, there’s a sub-menu called “Amazfit Bip S” which… brings you to many of the settings found on the “Enjoy” tab. It took me a few days to remember where to find what I was looking for, and there are times when I’m still not sure.

As a sports watch

By the time I took the Bip S for my first test run, I had already concluded the app was unpolished, and maybe even a little sketchy. It turns out, though, that the device excels as a sports watch. The GPS radio was quick to lock in my location, as marked by a haptic buzz and an on-screen message (“got location successfully”). My final distance and average pace consistently matched what my Garmin logs when I run the same route. My heart rate readings (including how much time I spent in each aerobic zone) also more or less matched what my Gamin has been telling me lately.

The mile alerts are prompt, too. If that sounds like a low bar for getting excited, consider that it takes my Garmin Forerunner 645 about four seconds after the watch hits a new mile to alert me and show my trailing-mile pace. In other words, my pace for that mile always has a few extra seconds tacked on. Thankfully, you’ll encounter no such delays on the Bip S. Additionally, you’ll find other common running-watch features like auto-pause and heat rate alerts.

My main complaints are that the on-screen layout isn’t customizable; you can’t switch from current to average pace, for instance. Pausing your run is also a weird affair. You want to press that side button, except it’s actually a long-press, during which time you see an animated ring fill up on screen. That second-or-two delay means if you don’t hold your finger long enough you won’t successfully pause. That delay also creates the illusion that you’re “losing” time off your pace while you wait for the watch, and I’m pretty sure that’s true -- whenever I unpause or end a workout, my total time is a few seconds past where I left it. This certainly isn’t a dealbreaker, but it could be annoying for folks obsessed with speed.

Aside from outdoor running, the watch has nine other built-in sport modes, including walking, treadmill running, cycling, spinning, free weights (“freestyle”), elliptical, yoga, jumping rope and both open-water and pool swimming. As you might expect with a budget device, there is no automatic workout detection like what you’ll find on the Apple Watch, though Amazfit does offer that on higher-end products like the GTS/GTR, the T-Rex, the X and Stratos 3.

Like other smartwatches, you can opt into reminders to get up and move throughout the day. As I’ve noticed on other watches and fitness trackers, the idea really is to get moving; in other words, a few minutes on my feet washing dishes didn’t cut it, for instance. I enjoyed the celebratory buzz when I would meet my step goal, and found myself glancing at my watch face throughout the day to see how far off my goal I was.

My only quibble there is that I found myself wishing for Garmin and Apple’s auto-goal-adjusting feature, which takes into account your recent activity patterns. Here, it’s up to you to manually change the goal yourself if you so choose. If this sounds like an advanced feature, keep in mind that Garmin’s $70 Vivofit 4 can learn user’s behavior and assign them custom goals.

The Bip S isn’t a “real” smartwatch in the sense that there are no purpose-built apps, like on the Apple Watch. That said, you can use the watch to mirror any smartphone notifications. (It may sound obvious, but it’s worth a reminder: The app menu will show different available apps depending on which ones are set up to show notifications on your phone.) As mentioned, you can also set an alarm, check the weather and download different watch faces, two of which are editable. I got particular use out of the music controls, which worked equally well with Apple Podcasts and Spotify. You won’t see any flourishes like album art, but you can pause and skip tracks, which is all you need anyway.

When a notification comes in, the watch will buzz. (It even does this if you’ve taken the watch off and left it on your nightstand.) These notifications aren’t really actionable but then again, smartwatch alerts rarely are. I can see on my watch that someone liked one of my tweets or shared one of my posts. Cool. (Shrug.)

In researching this review, I was surprised to learn how expensive running watches still are. I could have sworn prices had fallen more sharply. In Garmin’s lineup, for instance, the cheapest Forerunner watch costs $170. Garmin also sells a smartwatch with running features, the Vivosmart 4, for $130. But nothing close to $70 that could be considered a GPS watch, much less a GPS smartwatch. At that price, Garmini will sell you the Vivofit 4 fitness tracker I mentioned earlier. Meanwhile, the cheapest Apple Watch, the Series 3, costs between $169 and $199. It’s simply in a different league than the Bip S.

I did find the Polar M200 on sale at Amazon for $80, a steep cut from its original price of $150. I haven’t tested the M200, but I have had positive experiences with other Polar devices.

Whether you should buy this $70 watch ultimately comes down not just to your needs, but your expectations. If you want a smartwatch that also happens to have running features, there’s a chance you’ll feel let down by the device’s crude UI and limited utility. But, if you really just want an inexpensive running watch, the Bip S should be enough.