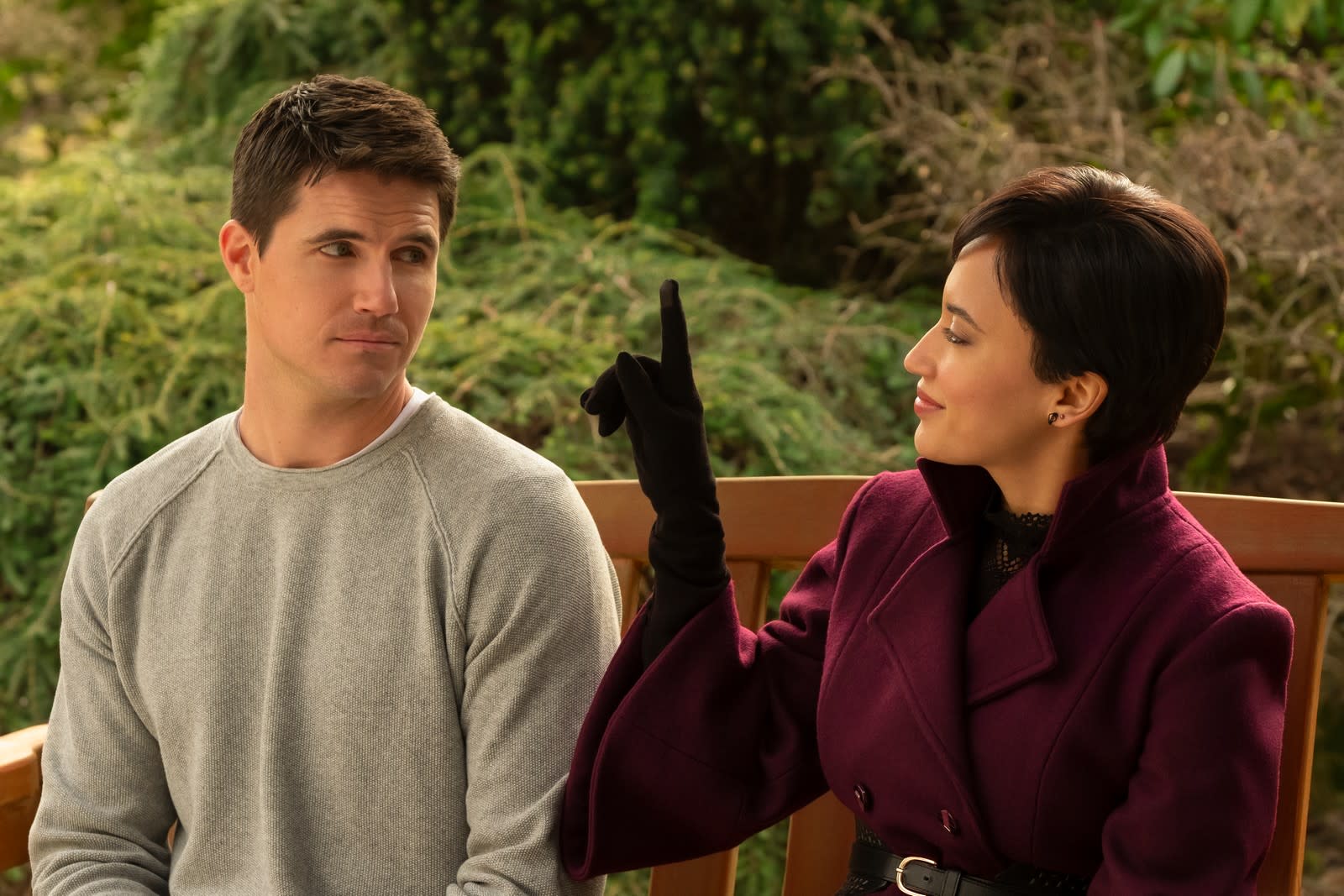 Take Black Mirror's dystopian tech commentary, The Good Place's philosophical exploration of the after-life, and the workplace antics of The Office, mash them together, and you have Amazon’s Upload. It takes place in a world that could easily be 10 years from now -- self driving cars are commonplace, the Earth is polluted and over-crowded, and, oh yeah, you can also achieve digital immortality by uploading your consciousness to the cloud. (It's just too bad eternal digital life involves vaporizing your head entirely.)

Upload, which premieres today, is an entirely new territory for Greg Daniels, the genius writer behind The Office, and Parks and Rec (not to mention a long run on The Simpsons). But it's a world that's clearly been percolating in his mind for years. It's bold and raunchy in a way a network sitcom never could be, and it defies being classified into a single genre. Daniels describes Upload as a "philosphical romantic comedy science fiction murder mystery." And after eagerly binging the series in a few days, that seems like an apt summary. No matter what you call it, it's incredibly compelling television that has plenty to say about a world where miraculous technology and extreme inequality can coexist.

[Listen to our full chat with Greg Daniels and the Upload cast on the Engadget Podcast! Subscribe to the show on iTunes and Spotify!]

"I always told the crew, this isn't a dystopia, and it's not a utopia -- it's some kind of 'middle-topia'," Daniels told Engadget during a media roundtable. "When you think about all the technological magic that we are capable of now, there's always unintended consequences, and glitches and screw ups. And that's because it's made by human beings, all of our human foibles are going to influence the technology. One of unfortunate themes about life in America over the past several decades, has been the growing income inequality. I think that technology is kind of great in many ways, but it's also being used by big companies now to become more efficient in ways that don't benefit everybody. And so, part of the show is trying to make you feel the unfairness of how people have different access to the wonders of the technology."

Upload centers on Nora Antony (Andy Allo), a customer support representative, or "angel," for Lakeview, a digital afterlife service developed by the nefarious tech company Horizen. Helping people get used to immortality might sound like a cushy gig, but Nora and her colleagues treat it with all the gravity of an office IT job. They have to help out with any issue, no matter how small, and for bigger problems they can also hop into the virtual world with VR headsets. Like most grunts in tech, Nora finds herself overworked and underappreciated.

Things change a bit when she has to support Nathan Brown (Robbie Amell), a hotshot tech bro involved in a self-driving car accident. He's forced to decide: die the natural way, or upload his consciousness to Lakeview to spend eternity with Ingrid (Allegra Edwards), the girlfriend he's secretly trying to leave. It turns out it's not much of a choice -- Ingrid coerces him into uploading, a gruesome process that involves vaporizing his head entirely. (And for some reason, there's also a viewing window for his family to see his lifeless, headless corpse flop to the ground like a dead fish. It's a surprisingly gory sequence coming from a writer known for gentle sitcom fare.)

We discover Lakeview alongside Nathan: It takes the form of a lofty resort, with an endless sea of trees and clear skies. And living there is no different than being nickel and dimed by a pricey hotel. It's the afterlife, but with all of the indignities of popup ads and in-app purchases. Nathan's stay is being bankrolled by Ingrid, which adds another layer of drama. If she stops paying, his digital self will be erased for good. Anyone paying for your afterlife effectively owns you.

This being a semi-romantic comedy, it's only a matter of time until sparks begin to fly between Nathan and Nora. And yes, it's all a bit odd, since he's a digital consciousness whose real body has died. But if you think about it, that's not too different than online relationships in general. Thanks to advances in virtual reality (and some gross full-body haptics), there's even the potential for them to touch and feel each other in the digital world. As they get to know each other, Nora also starts to learn that Nathan's death may not have been accidental at all, and everyone is a suspect.

Amid the romance and potential murder mystery, Upload is also an intriguing exploration of digital consciousness. Even if some technology could take all of the matter in your brain and upload it to the cloud, is the resulting consciousness still you? For simplicity's sake, the show accepts that's the case. But there are factions within the series that question the ethical nature of uploading yourself to the cloud. And argue that, if it's indeed a miraculous technology that lets humans live forever, shouldn't it be accessible to everyone?

"My personal feeling, and what the show is based on, is the idea that if you were to deconstruct your brain, it's, it's a finite amount of information," Daniels said. "It's a very large amount of information, because of the trillions of connections, but it's a finite amount and it's all based on atoms and chemicals. And if you had a large enough computer, and a quick enough way to scan it, you ought to be able to measure everything, all the information that's in someone's brain."

As you'd imagine, there are plenty of people who think it’s an unnatural way to stave off death, like Nora's father. He'd rather die the natural way to have a chance to be with his dead wife, instead of uploading and being a part of Nora's life (and presumed digital afterlife). And unlike Nora, who has faith in technology even after seeing the downsides of her own company, her father fundamentally distrusts how much tech has overtaken their reality. "The problem isn’t capitalism’s unholy alliance with big data, no, it’s the weirdos who want to grow their own vegetables," he says at one point.

In many ways, Upload feels like the sci-fi successor to Office Space and Silicon Valley. It's a world where corporations unite in unholy ways -- "Oscar Mayer Intel" and "Nokia Taco Bell" are major tech players. Our phones are literally attached to our bodies as digital handcuffs. (Your mobile screen appears as holographic displays when you hold your fingers up, as if it's literally being projected from your very body.) But what makes the show really succeed, much like Amazon's Tales from the Loop, is that its commentary is centered on human stories. At the end of the day, it’s about people struggling to survive and stay connected.