Google has just launched the Android 11 public beta, and for most of us this will be our first chance to preview the changes coming to the OS. The 1.72GB update promises a slew of improvements around messaging, navigation, multitasking and privacy, not to mention back-end enhancements for developers. If you’re willing to trade in your stable Android experience for a potentially buggy preview and you have a Pixel 2 or newer, you could enroll in the beta program and test it out today. But bear in mind that if you change your mind after getting the preview and want to go back to regular Android, your data will be wiped.

Messaging with better organization and reminders

One of the most notable updates coming to Android 11 is Bubbles -- little orbs that float on your screen above all other apps that let you open your messaging windows anywhere. This is very similar to chat heads in Facebook’s Messenger, and Bubbles will be accessible by any app that makes use of the API. For now, the only app that uses Bubbles is… Facebook Messenger. Which is strange, given it appears to support Android Messages in Google’s own animated image showing off the new feature. But during my testing Bubbles didn’t work with that at all.

Developers will have to enable Bubbles for you to start seeing more apps work with this. We’ve reached out to Telegram and WhatsApp to see if they plan to support this feature, and the latter declined to comment. Telegram has yet to respond, while Google says Messages support is coming soon.

Whether you favor Telegram, WhatsApp, Messages, Instagram, Facebook Messenger or any of the plethora of chat apps available today, it can be a drag to stay on top of all the people trying to contact you. The Android 11 beta features an area in the notifications shade that consolidates all your messages so you can address alerts that need a response before attending to your Instagram likes or Twitter hearts. If you can’t reply immediately, you can also set a reminder to get to it later. I like having all my conversations organized neatly at the top, but there are other things also taking up space in the notification shade like media controls that might make this less like Marie Kondo-ing and more like cluttering.

One of the things that would take up room in the Quick Settings area above your list of notifications is a new persistent media player. In this beta version, you’d have to first enable developer options (by repeatedly hitting the Build number at the bottom of the About Phone page), then enabling the “Media resumption” setting. If you don’t do this, media controls will look the same as they did in Android 10.

After I activated the feature, a small widget about the size of 3x2 Quick Settings icons appeared, offering buttons for play/pause, next and previous track. This is a smart way for Google to offer easy access to these controls without taking up space in the alerts list below, though it doesn’t display album art the way the notification-based controls do. I’m impressed that Google managed to keep the same six shortcuts in the Quick Settings panel, which previously was a single row of icons, by expanding to two lanes and squeezing the original set of options to the right. This way, it managed to place this media widget to the left for more controls. If you’d rather a simpler interface, you can disable Media resumption.

In Android 11, you’ll see more settings pop up when you long-press the power button. In addition to shortcuts for Google Pay, Emergency information, shutting down and restarting like before, the page will also show your connected devices. I had to make sure my Google Home app was installed first, and after I did, all my synced lights showed up. My smart speakers, displays and clocks didn’t, though. Google told Engadget that not all devices on the Home app currently show up, and that “we’re working on adding support for more devices.”

Each light had an individual tile, while the first tile of the grid controlled all of them -- you can rearrange this order if you prefer. I only have about five devices connected so this page was fairly manageable, but I imagine it’d get unwieldy if you have more than ten connected. Tapping the “All lights” tile once turned them all on at 8 percent, which is similar to one of my preset routines. My coworker Chris Velazco had his lights turned all the way up to 100 percent when he did this, so it’s clear our experience varied. We’ve reached out to Google to clarify how this works and will update when we hear back. I couldn’t find a way to add other settings though, like turning them to 50 percent after the 8 percent level, so I’ll probably still rely on my Google Home for my preset lighting profiles. 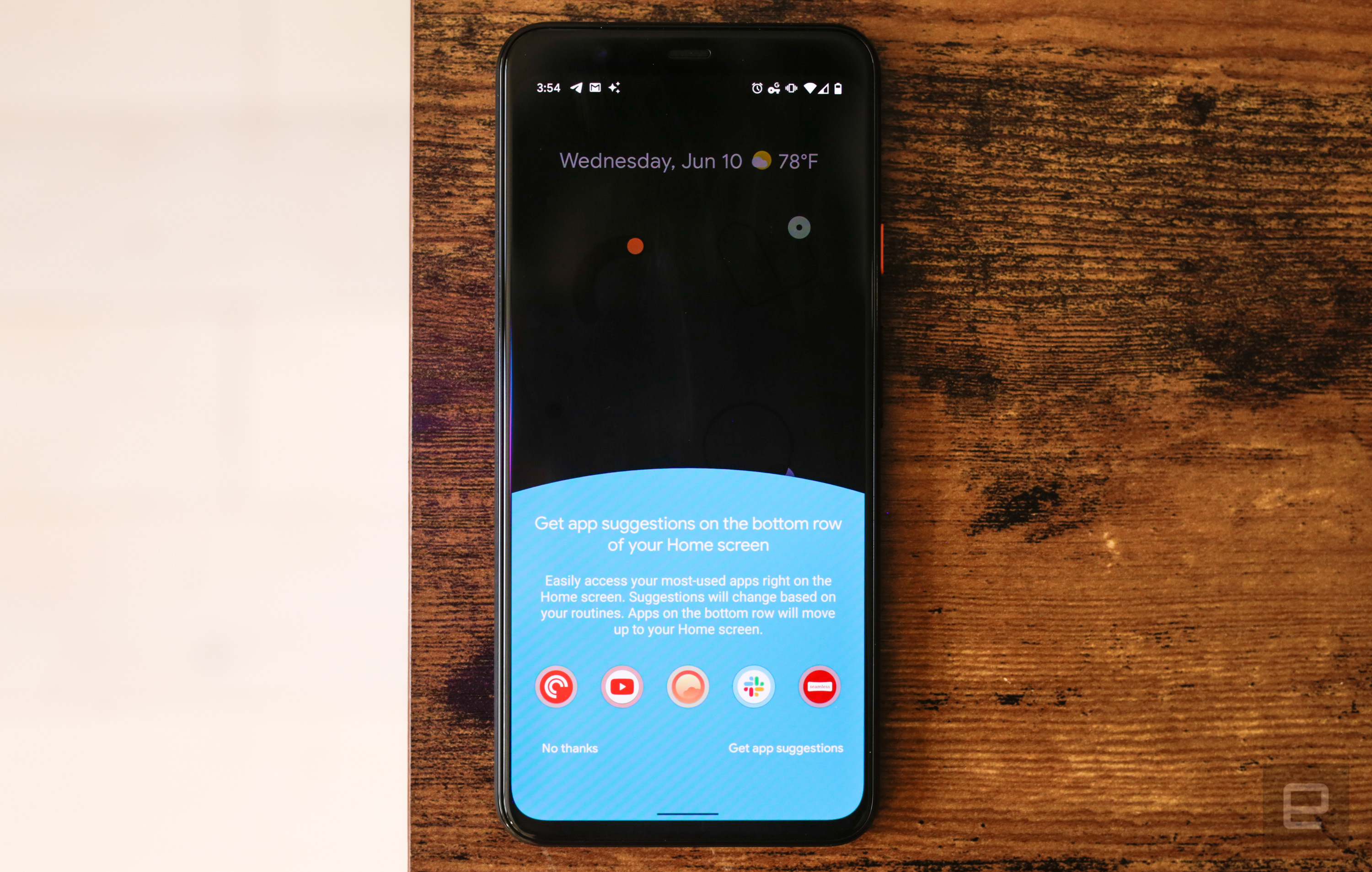 Android 11 is also meant to feel more intuitive by better understanding what you’re doing and offering more appropriate suggestions. Keyboards and autofill apps, for example, will be able to “securely offer context-specific entities and strings” directly in the suggestion strip. It’s not very clear yet what that means, other than maybe a Map pin for a restaurant you mention in a chat or a labrador GIF when you talk about labs rather than a corgi one. Helpfully for people who largely use voice control to interact with their phones, Android 11 will get wiser about what’s on the screen and generate labels for elements like images or menus for easier navigation.

Neither of these tweaks were available to test yet, since developers have to build support for them into their apps. But I did get a chance to see Google’s new suggested row of apps. When you install the preview, the Pixel app will prompt you to enable this feature. If you do, a new row of icons appears on your home screen above the Search bar and below your existing bottom lane of apps.

I haven’t tested the Android beta for all that long, so it’s not surprising that the suggested apps weren’t very useful. It showed me things like YouTube, Clock, Gmail, Tips and Netflix at first, though after I installed the Google Home app it replaced Netflix with that instead. As it stands, I’m not sure if I want to give up a row of space for apps that aren’t usually what I want to use just yet (and I already find the suggestions in Android 10’s All Apps page pretty unhelpful). You can turn this off in Settings, but it hilariously leaves behind a row of empty space on your home page that wasn’t there before.

I did appreciate the new one-time permissions option that Android 11 adds, though. When I installed TikTok and had to grant the app access to my microphone and camera, I was given choices to allow “While using the app,” “Only this time” or deny altogether. There is no longer a setting that gives apps access all the time, which is fantastic. I’m also grateful for the one-time permissions since I tend to install apps just to check them out for work and then forget to uninstall them after. This gives me some peace of mind that a rogue app doesn’t have access to my location or mic in the background.

There are a ton more changes coming that we didn’t get to check out, mostly because they’re back-end features that require more testing. Things like better 5G support, for example, as well as permissions resetting after an extended period of non-use, would need more time than this quick hands-on allows. Plus, more developers need to support some of the new features for us to get a better sense of how useful they actually are.

While the most notable new features in the Android 11 beta don’t feel groundbreaking, they could make for a more useful, better-organized OS. It just needs more developer support. Right now, most people should skip this preview. In fact, just wait for the stable version to launch, which we anticipate will happen by October when Google is expected to unveil new Pixel flagships.