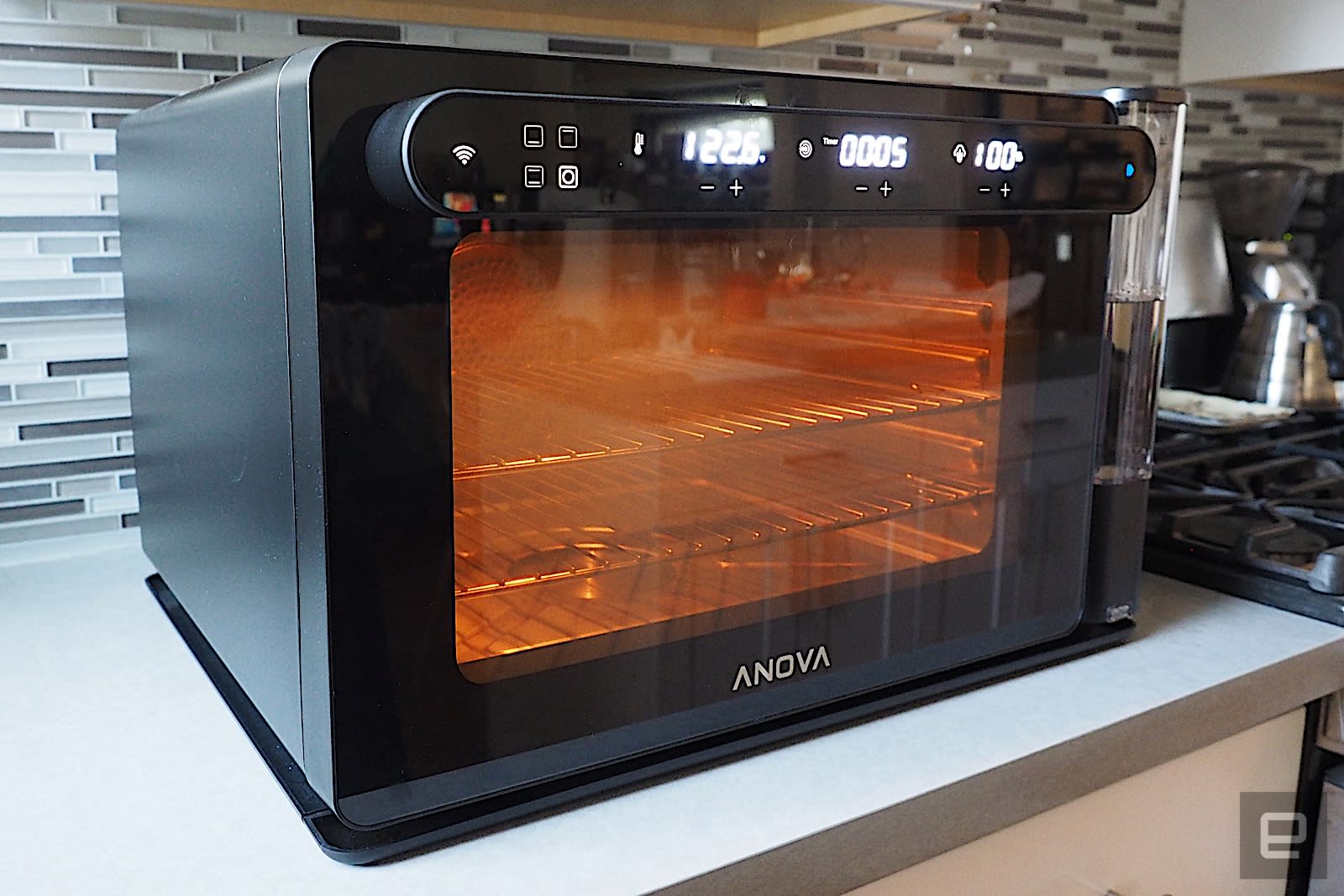 N. Lee
@nicole
December 8, 2020 8:30 AM
In this article: anova, reviews, combi oven, commerce, review, gear
All products recommended by Engadget are selected by our editorial team, independent of our parent company. Some of our stories include affiliate links. If you buy something through one of these links, we may earn an affiliate commission. All prices are correct at the time of publishing.

I’ve been using an oven for the past few weeks that has enabled me to cook the kind of food I only dreamed was possible. I’m talking roast chicken with juicy meat and crispy skin, perfect bagels without having to boil a pot of water, and my first-ever French-style baguettes. It’s the new $600 Precision Oven by Anova, and though it has a few flaws, serious cooks looking to up their kitchen game should strongly consider it. And if you like to bake bread, it’s an absolute game changer.

Anova, a company mostly known for its sous vide cookers, first introduced the Precision Oven back in 2017, but it wasn’t until this year that it finally became available for purchase. In brief, the Precision is hardly an ordinary oven. Instead, it’s a special combination convection-steam oven with precise temperature and humidity controls that can cook foods in either dry or wet heat.

This is an oven that can steam vegetables at a lower temperature so there’s no risk of overcooking. It can also blast steam at a high temperature so that bread dough can experience “oven spring” and expand. Additionally, the oven has a “Sous Vide Mode” that lets you cook foods to the ideal temperature but without the need for plastic bags. On top of that, the Precision also functions as a regular convection oven, letting you roast, bake, broil and air-fry foods.

This idea of a convection-steam oven is actually nothing new. So-called “combi ovens” have been around for several years now, but are typically only found in restaurants or high-end designer kitchens (at least in the US). That’s because commercial  “combi” ovens are usually exorbitantly expensive — they start at around $5,000 and can be as high as $30,000 or more. In comparison, the Precision, costs a reasonable $600. That might sound like a lot versus a regular toaster oven, but it also does so much more.

The Precision will take up significant real estate on your kitchen counter. Measuring 22.4 inches wide, 17.7 inches deep and 14.1 inches high, it is huge; it’s likely larger than your standard microwave or toaster oven. What’s more, Anova recommends that you keep a 4-inch clearing all the way around it for safety reasons, so it ends up taking up even more space than you might expect. Anova also doesn’t recommend storing anything directly on top of the oven since it can get hot, which can make storage a problem in a small kitchen. The benefit of such a large oven, however, is that it has a very roomy interior. I was able to fit a whole five-pound chicken without any difficulty, and even a 7.25-quart dutch oven.

The oven’s design is largely inoffensive. I tend to prefer the look of stainless steel appliances, but Anova has gone for an all-black aesthetic that matches its sous vide cookers. On the right side is the water tank, which you’ll have to slide into place when you first unbox the device. It’s large enough to hold over a gallon of water, so a one-time fill will likely last you weeks or even months if you don’t use the oven regularly. There’s also a drip tray that you tuck in underneath the front of the oven so that any extra condensation water won’t leak all over your counter.

Anova recommends you fill the tank with distilled water instead of tap water to minimize the chance of mineral deposits. That might seem like a pain but as I said, you probably won’t have to fill the tank that often, so I think it’s worth the effort. While I haven’t had any negative experiences with the tank, I should note that there have been a few reports online of tiny cracks forming around the tank’s plastic housing. The company does seem to be responsive in replacing any defective parts, but that feedback is disconcerting nonetheless, especially given the oven’s high asking price.

Inside the oven are heating elements on the top, bottom and rear. On the front is a touchscreen display, which houses a lot of the appliance’s controls. You can select one of four different heating settings, adjust the temperature and time, toggle the steam function off and on, and more. I recommend using the app instead for these settings as it’s simply easier, but I appreciate that Anova has provided an alternative in the event you don’t have your phone handy.

In addition to the oven itself, you get a probe thermometer that plugs directly into the oven; two oven racks; and a sheet pan. That pan is a little too flimsy for my taste; it warps and bends when it’s hot, and therefore sometimes deforms while in the oven.

One of my main concerns with the oven was simply learning how to use it. How would I cook with an appliance I’ve never used before and isn’t mentioned in any of my cookbooks? Thankfully, Anova has a companion app for the oven preloaded with over 150 recipes that walks you through step-by-step instructions on how to cook with it. Plus, since it’s connected to the oven via WiFi, the app can do all the temperature and humidity settings for you with a single tap.

Some recipes are even pre-programmed with multi-stage cooking that will transition from one step to another. In the Roast Chicken 101 recipe, for example, I cooked a spatchcocked chicken via sous vide with the probe thermometer in the first stage. Then when the chicken reached the target temperature, the app alerted me to take it out of the oven, at which point I tapped another button so the oven would preheat to a super-high temperature of 482 degrees Farenheit. After I basted it with a bit of oil, I then put the chicken back in, and the skin crisped up beautifully in just under 10 minutes. While using pre-programmed recipes like this took some of the fun out of cooking, I still really appreciated them because they helped me learn how to use the oven.

Over the past two weeks, I’ve tried many more recipes, marveling at what the device could do while figuring out a few tricks along the way. For example, I learned that the aforementioned roast chicken was cooked via a “dry” sous vide method without any steam so that the skin wouldn’t get rubbery. On the other hand, the app instructed me to cook both steak and salmon in a “wet” sous vide method with 100 percent steam since soggy skin is less of a concern. Plus, using the oven to cook via sous vide allowed me to set the cooking temperature higher than the target temperature so that the food would cook faster.

With the steak, for instance, I set the oven temperature to 140 degrees and the target probe temperature to 124 degrees for medium-rare doneness. In a normal sous vide, this might have taken an hour. But in the Precision, it took about half the time. Yes, I needed to take the steak out and sear it in a cast iron pan afterward (the radiant heat of the oven is not as efficient as the conductive heat of a pan), but that’s still a win. Sous vide cooking without messing around with plastic bags, wasting a bunch of water and it’s faster? That might be reason enough to get this.

But where the oven really shines is with bread. When making bagels, I used the oven to proof the dough at a low temp. I then formed the dough into their round bagel shapes and steamed them in the oven, which is far easier than having to boil them in a pot of water. After the bagels had steamed and risen, I took them out, brushed them with egg wash and sprinkled a healthy dose of Trader Joe’s Everything Bagel Seasoning all over them. I then baked the bagels in a 392-degrees oven with 30 percent steam. The result were gloriously chewy bagels that I could hardly believe I made myself.

Then there was the baguette, which I was actually quite nervous to make because I’m hardly an experienced baker. In fact, as I was making it, I thought I had messed up somehow because the dough seemed wetter than I thought it should be. I also didn’t have the specialty baguette pan that the recipe called for, so after shaping the dough as per instructions, I simply just placed them on a parchment-lined pan.

I then put it in a 475-degree oven with 100 percent steam for the oven spring stage. After five minutes, the oven automatically switched into a dry browning stage with zero steam. Another 10 minutes or so and I was rewarded with three baguettes that turned out surprisingly well considering how new I was to the process. They didn’t exactly look like traditional baguettes (perhaps more like fancy breadsticks), but they tasted fantastic, with a lovely moist crumb and crusty exterior. I was blown away. If an inexperienced baker like me could turn out great bagels and baguettes with this oven, imagine what a professional could do.

At some point, I got so comfortable with the oven that I was able to use it without needing a full-blown recipe. During Thanksgiving, I used it to cook a turchetta following a similar method to the roast chicken. I cooked it via sous vide with a probe thermometer to a target temperature of 145 degrees, took it out and then placed it back in a 482-degree oven to crisp up the skin. The result was a terrific Thanksgiving dinner that I might not otherwise have been able to pull off

As amazing as I think the oven is, it might not suit everyone’s tastes. For one thing, I don’t think it’s very beginner friendly. Those wary of new kitchen tech might not want to give this a go; if the Instant Pot is too intimidating for you, I’d stay away from this. What’s more, I think it could have used more presets for frequently cooked foods. I really missed having a dedicated button for toast, for example. (There’s a “Toast 101” recipe in the app, which I think is a bit too much; you shouldn’t need to follow a recipe to make toast.) Basically, if all you want is a toaster oven the Precision Oven is probably overkill.

I also would prefer it if you could program the oven to shut off automatically after the timer is done. What’s more, I found the oven difficult to clean. After just a couple of weeks of cooking with it, the interior is already streaked with tough-to-remove grease stains.

As the only combi convection-steam oven on the market under $1,000, the Precision doesn’t really have a rival. Sure, there are other smart ovens like the June, the Tovala, or the one from Amazon, but none of those have the same precise temperature and humidity controls. Of course, if you don’t care much for that and just want a countertop oven, then any of those other options will work; most of them are certainly a lot more affordable. They also tend to be a lot more forgiving to beginner cooks. But if you want a professional-grade steam oven that lets you make baguettes and bagels and sous vide food without the bags, there really is nothing like it.