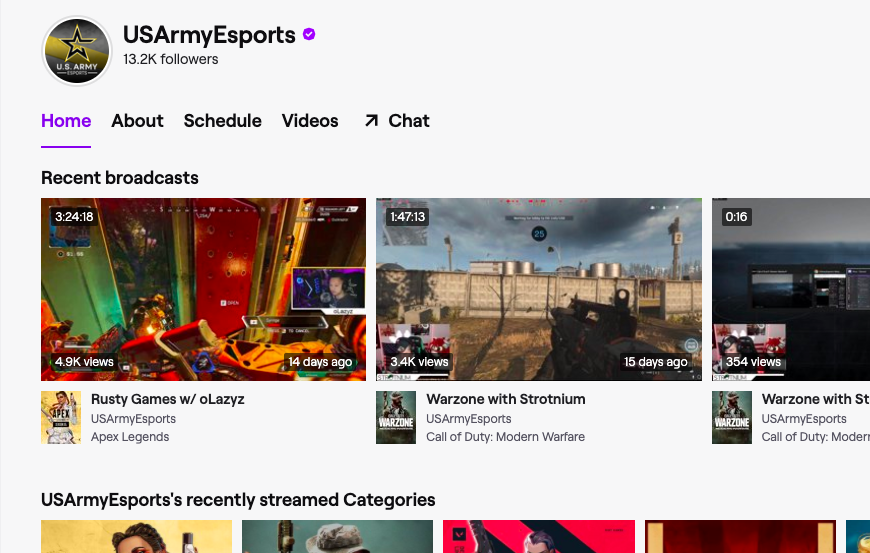 The US Army has paused activity on its Twitch account after drawing criticism from First Amendment groups for banning a user who asked about war crimes during a livestream. The user, activist Jordan Uhl, subsequently wrote an article for The Nation criticizing the Army, Navy and Air Force for using Twitch as a recruitment method. Wednesday, Rep. Alexandria Ocasio-Cortez told Vice she plans to file a measure that would prevent the military from using Twitch and similar platforms for recruiting.

The Army, Navy and Air Force have e-sports teams that stream on Twitch. But unlike typical Twitch channels, military recruiters play Call of Duty or Valorant while chatting with viewers about military life. According to Uhl’s article, recruiters are sometimes interacting with Twitch users as young as 13.

During a July 8th Army stream, Uhl typed into the channel’s chat, “what’s your favorite u.s. w4r cr1me?” and linked to a Wikipedia page listing war crimes by the US military. The Army promptly banned Uhl from the channel. A video of the interaction has surfaced on Twitter.

The Knight First Amendment Institute responded Wednesday by sending the Army and Navy a letter condemning Uhl’s ban as a violation of the right to free speech. “When the government intentionally opens a space to the public at large for expressive activity, it has created a ‘public forum’ under the First Amendment, and it cannot constitutionally bar speakers from that forum based on viewpoint,” the letter said.

An Army spokesperson told GameSpot “the team has paused streaming to review internal policies and procedures, as well as all platform-specific policies, to ensure those participating in the space are clear before streaming resumes." Army spokeswoman Kelli Bland said users are banned from the channel when they violate Twitch’s terms of service, and said Uhl was banned for harassment. A Twitch spokeswoman didn’t comment on Uhl’s ban, but pointed to Twitch’s policy which states “channel owners and moderators are free to ban anyone from their channel, regardless of the reason.”

The Army’s Twitch channel has also drawn criticism for advertising a “giveaway” for an Xbox controller, only for a link on the ad to lead to a recruiting form. Twitch responded by telling the Army to cut out the fake giveaways. Still, some say Twitch is an inappropriate place for the military to fish for potential recruits. Ocasio-Cortez’s says as much with her planned amendment to an appropriations bill.

“It’s incredibly irresponsible for the Army and the Navy to be recruiting impressionable young people and children via live streaming platforms," Ocasio-Cortez told Vice. "War is not a game, and the Marine Corps’ decision not to engage in this recruiting tool should be a clear signal to the other branches of the military to cease this practice entirely.”

In this article: Twitch, Freedom of speech, first amendment, army, navy, Air Force, u.s. military, alexandria ocasio-cortez, news, gaming, esportssg
All products recommended by Engadget are selected by our editorial team, independent of our parent company. Some of our stories include affiliate links. If you buy something through one of these links, we may earn an affiliate commission.