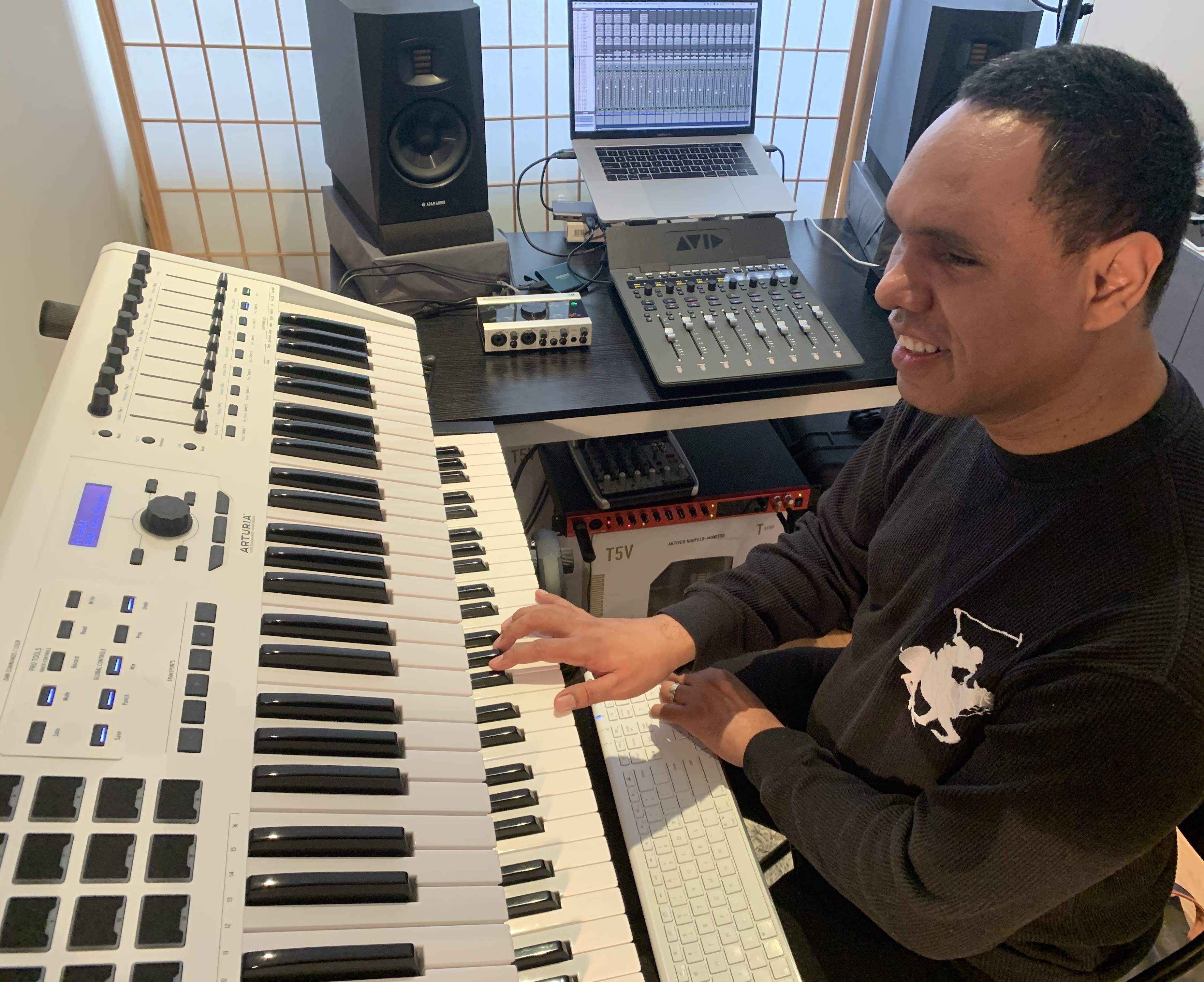 How Arturia made its music-making software more accessible

And where it can improve.

When visually impaired music producer Jason Dasent decided to buy a collection of instrument plugins from Arturia about four years ago, he did so despite his suspicion that the company’s tools wouldn’t be accessible. He was right. “At that point I couldn’t browse and use the software,” he said. “I pretty much couldn’t do anything.” He had spent some $500 on Arturia’s V Collection 5, a set of virtual instruments that included recreations of some vintage synths he wanted to use. It was cheaper than spending hundreds of thousands on actual synths, he told himself.

But because Arturia’s preset manager Analog Lab wasn’t built to accommodate the visually impaired at the time, Dasent had to drop even more cash. “I would have to hire someone to come in for maybe three days to save these presets,” he said. For between $500 and $1,000, this person would export the presets to a format that would work in Avid’s Pro Tools, which had the accessibility features Dasent needed. It was a tedious and expensive process, he said, but even after that he could only choose presets. He couldn’t tweak cutoffs, envelopes, parameters or adjust the brightness. “I had no choice but to just stick with the presets,” he added.

In 2019, Dasent presented at the Audio Developers Conference (ADC) in London, where he was approached by Arturia’s then director of software development, Kevin Molcard. Moldcard wanted to make Analog Lab accessible, and asked for Dasent’s help. After the company set him up with the V Collection 7 and one of its Keylab controllers, Dasent started playing around. Eventually, Dasent was introduced to Arturia product manager Pierre Pfister, who wanted to learn more about what Analog Lab was missing.

Two months later, Dasent said, he got a call from Pfister. “I have something to show you.” What Pfister then shared with Dasent was an early version of a new accessibility toolset in Analog Lab V. “It’s as if my eyes are now open,” Dasent gushed. That kicked off a months-long back-and-forth between Dasent, Pfister and the Arturia team as they worked on the prototype, culminating in the launch of a new update today. The company is announcing a new accessibility mode to Analog Lab V, which will enable all users to turn on auditory feedback and screen reading. It also brings various “ergonomic improvements and bug fixes.”

With this new accessibility mode, the company's Keylab controllers now communicate with the Analog Lab software and a computer's text-to-speech engine. "Basically, as I press a button on Keylab, or I turn a dial or change a value, it sends notifications out to the system voice, allowing me to know exactly what's on the keyboard," Dasent said in a video describing the update. Now, when he tweaks faders and encoders on the keyboard, "I can know exactly what the values are as I tweak the parameters." As he turns a knob on the controller to scroll through a list of instruments, a voice reads out the name of each item he lands on.

Since Dasent is familiar with Arturia's devices, he has the layout of buttons and dials memorized. But he added that "the layout of the keyboard is very well thought out, so it makes learning where everything is very easy."

The most challenging part of getting the software accessible for visually impaired users, according to Pfister, wasn’t necessarily implementation or programming — it was figuring out how best to communicate with the system’s text-to-speech. Since a lot of music software (and many creative products in general) aren’t designed with accessibility in mind, there aren’t many best practices to pull from. Arturia almost had to start from scratch. “The hardest part was knowing what we should do and how we should make a product accessible,” Pfister said.

Once they figured it out and showed Dasent the first prototype though, the results were gratifying. “His reaction made everything worth it.”

Pfister and his team know there’s more work that needs to be done. He acknowledged that Arturia is a small company and there’s “a lot of things we don’t know.” The plan for now is to continue listening to and soliciting feedback to “identify what most of our users would like to be able to do.” Whether that means getting all of the Analog Lab program fully accessible or to make all its individual instruments accessible, Pfister said the goal is to continue improving what it’s done with Analog Lab.

Even the leading digital audio workstation (DAW) Pro Tools struggled with keeping its software accessible through years of updates in the 2000s. At the time, in an effort to keep up with the latest versions of Apple’s desktop software, Avid offered newer plug-ins and features in its OS X version that those using older editions of Pro Tools did not get. The problem is, while the pre-existing Pro Tools HD (which launched in 2002) was “almost entirely accessible,” according to audio engineer Slau Hatlyn in an article on Avid’s website, the software for OS X wasn’t usable even after Apple introduced its VoiceOver screen reader in 10.4 Tiger in 2005. The only thing Hatlyn could access was the menu bar. “No other windows were readable.”

It took until Pro Tools version 8’s launch in 2008 for the software to regain accessibility, a long time considering “the previous accessible version was 5.3,” according to Hatlyn. Even so, the conversation continued, with Hatlyn calling out changes that broke accessibility between versions 10 and 11.

And this is one of the industry’s most widely used DAWs. While Apple’s Logic is lauded as accessible, other music software companies that build assistive technology into their products are a rarity. Brands like Ableton and Image Line don’t appear to have comprehensive tools for the visually impaired in their products Ableton Live and FL Studios, at least based on the comments on their forums. A spokesperson for Ableton highlighted a Zoom Display feature, as well as recent updates to improve contrast, reduce automatic colors and adjust grid intensity as tools in Live for visually impaired users. The spokesperson added “We’re aware that there is much more to be done here.” Image Line has yet to respond to our request for comment.

Will Butler, the vice president of company whose app, Be My Eyes, connects blind and low-vision people with sighted volunteers, wrote a LinkedIn post about the accessibility of music software. In it, Butler asked blind music producer Byron Harden to anecdotally rank the accessibility of popular music software. While Harden placed GarageBand, Pro Tools, Audacity and Logic in the top four, awarding them passing scores out of ten, Ableton Live and FL Studio came in near the bottom with one point each.

Butler also highlighted Native Instruments for its efforts. In 2019, the company expanded support for Mac’s VoiceOver, as well as Narrator and the Speech API in Windows. Prior to that, Native Instruments had made keyboards with touch-sensitive rotary encoders and buttons with auditory feedback. With those, its software “can detect when the user’s fingers are resting on them, then give auditory feedback – synthesized speech – of the current value, and do so continuously as it’s adjusted.”

That auditory feedback is one of the features Arturia is bringing to Analog Lab V that Dasent is most grateful for. “One thing they got right: quality of feedback,” he said. Say for example you load a preset. When you hit the load button in Analog Lab V, it will say “Loaded” and read out the name of the pack. Dasent said that software can sometimes offer too much feedback or use overly lengthy sentences and phrases to communicate. It would be like a sighted person having to read 20 lines of text to get one little piece of information that a single sentence could have conveyed.

As Pfister recalled his first call with Dasent, he was amazed and shocked by the amount of effort Dasent was willing to expend to use Arturia’s instruments. “If they are willing to put in that much effort, why don’t we do a little bit to make their life so much easier?”

Indeed, while there are frontrunners in making music software more accessible for people with disabilities, the industry as a whole could benefit from a published set of best practices. This way, they could be disseminated to smaller companies entering the space and make it easier for them to build accessible products. Ultimately, as with the development of most assistive technologies, that would benefit all users regardless of able-bodiedness.