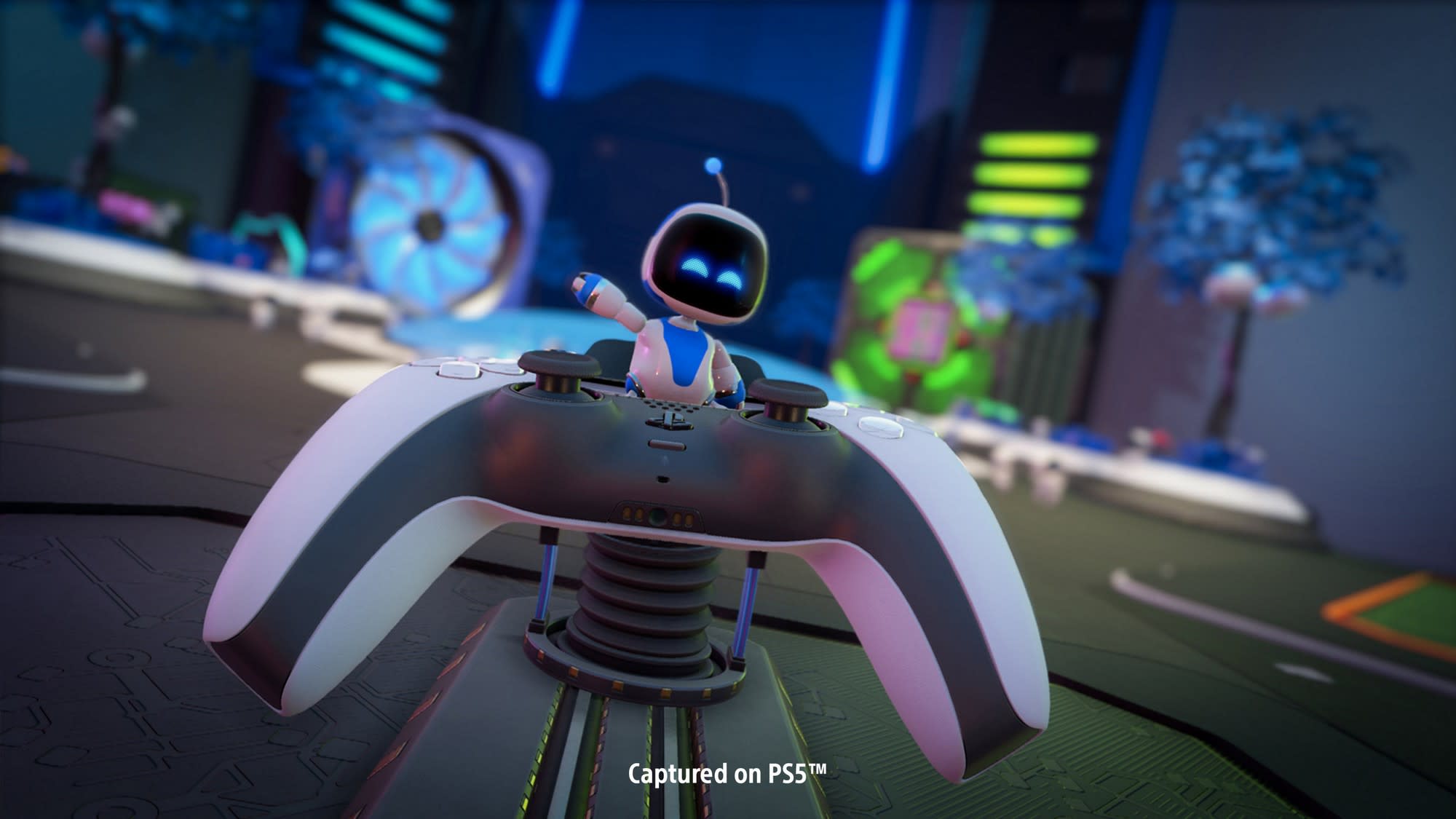 Team Asobi's creative director on developing for a new type of gamepad.

Sure, Spider-Man: Miles Morales and the Dark Souls remake are getting most of the PlayStation 5 love, but Sony’s most significant next-generation launch game may be Astro’s Playroom. It’s a showpiece for the new DualSense controller's haptic capabilities, which includes finely tuned rumbling and adaptive triggers with adjustable tension. Best of all, you can start playing it on your PS5 right away; it’s pre-installed on every system. Just like with Astro Bot Rescue Mission on the PlayStation VR, the diminutive robot is the ideal guide as Sony breaks new ground with hardware.

As I mentioned in my PlayStation 5 review, simply booting up the game jolted me awake -- it vibrated in my hands as if it was the one holding me. I could feel Astro’s every step, and I was even more amazed that every surface he walked on felt different. Thanks to the adaptive triggers, using a bow felt startlingly realistic, as if I was pulling back on a taut string.

From the start, it’s easy to see that Astro’s Playroom was built in concert with the DualSense controller. In an interview with Engadget, Nicolas Doucet, creative director of Astro developer Team Asobi, said his group jumped at the chance to develop new ideas for the gamepad.

[Check out our full interview with Nicolas Doucet on the Engadget Podcast below. Subscribe on iTunes and Spotify!]

“We’re based in Japan, and [Sony’s] hardware engineering is also in Japan, so we have this kind of old relationship of collaboration with the team,” he said. “Those guys come up with these mechanical features that go inside the controllers, and of course they have a good kind of hunch for what might be a good thing for the future of games. But their core discipline is mechanical engineering."

Thanks to their proximity, Team Asobi was able to snag early DualSense prototypes, which at the time were large and saddled with assorted wires. “At the time, the form factor isn't really the point,” Doucet said. “It’s more about having all of these features and whether they’re usable inside the game and making the experience better.”

Doucet and team started rapidly prototyping gameplay concepts. The first was a small shooting range with pistols, shotguns and a variety of other weapons, which was meant to test how the adaptive triggers handled them. They also learned how the revamped haptics could make walking over a variety of surfaces feel distinct even on a handheld device, so you could tell the difference between sand, water and ice without looking at the screen.

One demo effectively simulated the feeling of controlling a character in a motorcycle, so much so that you could feel the engine revving up and the exhaust kicking back in the controller. That test even surprised Sony’s engineers. After Team Asobi shared some of their gameplay findings, the engineers ended up tweaking some aspects of the DualSense controller's design.

“It made them think about weight position in the controller, and does it work so you feel it well,” Doucet said.”  “Do you get that kind of trinity, of what you see, what you feel, and what you feel? Does it feel right? It helps us kind of get better.”

Team Asobi only had three developers working on the DualSense gameplay prototypes for a few months, but they managed to come up with 80 tech demos. To put this timeframe in perspective, the group was also in the process of finishing their last game, Astro Bot Rescue Mission. As they started to think about what to do with their DualSense findings, Asobi decided not just to create a collection of minigames, something that’s been done plenty of times with new tech. (Take, for example, Valve’s "The Lab” demos that debuted with SteamVR headset.)

Doucet says Team Asobi wanted to do a preinstalled title for the PS5 from the beginning; it wasn’t a mandate from Sony’s higher ups. And they realized they already had a great character in Astro. He's cute, easy to control and likely the best mascot Sony has had yet. (Sorry, Crash Bandicoot.) So Team Asobi decided to do something it’s never done before: build a complete non-VR game for Sony’s new console.

“It felt like, if we could absorb as many of these tech demos as possible, and make them inside a cohesive experience, it would probably have a lot more value and fun than having a collection of minigames,” Doucet said. “And then there’s the benefit of bringing our character to a wider audience.”

But Team Asobi wasn't the only developer previewing the DualSense hardware. As Doucet describes, the company also brought in PlayStation studios and third-party developers to try out the controller and throw ideas around. His team ended up getting some pointers from Naughty Dog's Santa Monica and others, which made their way into Astro’s Playroom. Team Asobi was able to share their early gameplay demos as well, which could end up influencing the first wave of PlayStation 5 titles.

While you wouldn’t know it from playing Astro’s Playroom, it’s Team Asobi’s first non-VR title. And while Sony hasn’t said anything about a new PlayStation VR for the PS5, I couldn’t help but wonder if Doucet had some ideas in mind for using the DualSense controller in virtual reality.

“I would love if, two or three years from now, when we look back, we can say for sure that first implementation was really cool, really magical, but today we can do even better,” Doucet said. “I think that would also prove that this technology has got legs to evolve throughout the life cycle [of the PS5]. It's not one of those things that you do once and that’s it. I think we’re going to continue exploring and finding new things, and refining it in ways that maybe today we just haven’t thought of yet.”