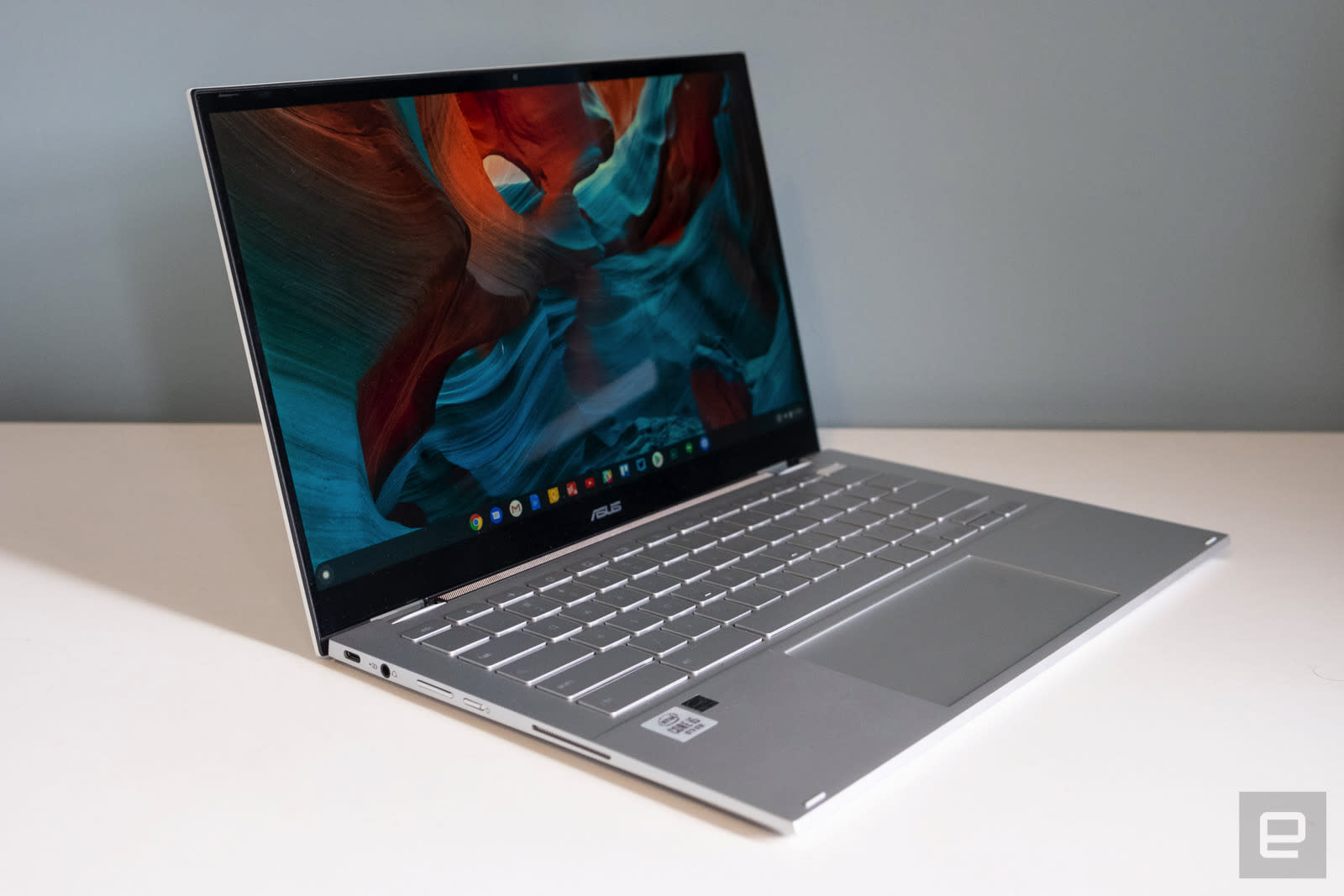 The latest Flip isn't the Chromebook for everyone, unlike previous models.

Somehow, I’ve become the guy at Engadget who loves Chromebooks. It’s a weird niche, but I believe that for a lot of people, the right Chromebook can be a great everyday computer. As such, I’ve kept my eye out for years now on what the best all-around Chromebook is — and for a few years now, one of ASUS’ Chromebook Flips has been my default answer. In 2017 and again in 2019, the company released excellent models that both felt like the best option available at the time.

Now, ASUS has another Flip for sale, the Chromebook Flip C436. In a lot of ways it’s similar to last year’s edition, but it’s also an undeniably upgrade. It’s thinner and lighter, has more powerful processor options, and it includes more RAM and storage. But as you might expect, you’ll be paying for these upgrades, as the C436 starts at $799. As Chromebooks get more capable and costly, I’m always looking for one that hits the sweet spot between specs, features and price. Unfortunately, ASUS didn’t quite hit the spot this time.

Like its predecessors, the Chromebook Flip C436 isn’t the most distinctive laptop, but it’s quite well made. ASUS went with a magnesium aluminum alloy chassis that’s strong and lightweight, but its silver color feels bland these days. I wasn’t expecting the flair of, say, Samsung’s red Galaxy Chromebook or even the pale pink Pixelbook Go, but there’s not much to say from a visual standpoint. The pure white lid makes for a nice contrast, but it’s still a fairly unremarkable design.

Despite that, the C436 ticks most of the boxes for a premium laptop in 2020. It’s both thinner and lighter than that C434, which is a major relief because that laptop was pretty heavy and chunky for a Chromebook. ASUS’s latest isn’t exceptionally thin at 13.8mm or light at 2.4 pounds, but it’s still an improvement over the 3.2-pound C434.

While the Flip C436 doesn’t match the compact dimensions of Samsung’s Galaxy Chromebook, its extra size makes room for a 14-inch 1080p touchscreen with super thin bezels. ASUS pulled this trick off on last year’s model, and it’s just as impressive here. While this screen obviously isn’t as pixel-dense as the 4K display on Samsung’s newest Chromebook, the slightly bigger screen size is welcome. This screen is also nicer than the one on the Pixelbook Go, with more vivid colors and higher contrast. I’d prefer a 16:10 ratio, but the bigger screen at least means I can crank the resolution higher before the text gets uncomfortably tiny.

I’ve already mentioned the Samsung Galaxy Chromebook a few times, because it’s a natural comparison point (and not just because I reviewed it last week). Both laptops are premium offerings with powerful hardware and 360-degree hinges for converting to tablet mode. Both have the same array of ports, as well: two USB-C (one on each side), microSD and a headphone jack. The sides also house the power button and a volume rocker, two things common on convertible laptops. The major downside with the Flip C436 is that it doesn’t have an old-school USB-A port, as the C434 does. If that matters to you, you’re probably better off with last year’s model.

Finally, there are small speakers on each side, but these are fortunately not the only ones. ASUS branded the Flip C436 with Harmon Kardon audio, and the combination of side speakers and a speaker bar built into the hinge of the laptop make for surprisingly decent performance. Stereo separation, which is often nearly impossible to notice on a laptop, was more present here than I expected, and the overall volume and clarity are impressive. I wouldn’t use this machine for extended music-listening sessions, but it’s more than capable in a pinch.

As with the past two Chromebook Flip models, the keyboard on the C436 is excellent. It has deep key travel which makes for a comfortable typing experience, and it’s reasonably quiet as well. I might rate the Pixelbook Go’s keyboard as ever-so-slightly better, mostly because each individual key cap has a little less wobble; it’s also quieter. But despite those few caveats, I wouldn’t hesitate to recommend the C436 to people picky about their keyboards.

Oh, and just like Samsung’s latest, the C436 has a fingerprint sensor in the top row for unlocking the laptop and other authentication needs. It works without issue and I’m glad to see this option popping up on more mid-range computers these days.

The trackpad isn’t nearly as praise-worthy but it gets the job done. The main complaint I have with it is the same as I have with almost every other laptop out there: not enough vertical real estate. I’m not sure why so many laptop makers put such cramped trackpads on computers that otherwise have plenty of deck space, but here we are.

Every time I write about a convertible Chromebook, I have to preface things by saying that I find very little utility in flipping a relatively large and heavy device around into tablet mode, so how well that works has little bearing on my evaluation. That said, the Chromebook Flip C436 has a strong and smooth hinge, whether you flip the screen all the way around or just use it as a laptop. And the recent release of Chrome OS 81 actually makes that tablet experience better with some new gestures and UI tweaks. Tablet mode has long been a sore spot for Chrome OS, with plenty of lag switching apps and moving through the UI, but it’s actually pretty smooth on the C436.

More important is how the C436 performs as a laptop — and with the powerful hardware on board here, this was one of the best Chrome OS experiences I’ve ever had. The $799 base C436 comes with a 10th-generation Intel Core i3 processor, 8GB RAM and 128GB of storage. That’s more than enough Chromebook for most people, but the $999 model I’m testing steps up to a Core i5 processor, 16GB of RAM and 512GB of storage. In both cases, ASUS is using Intel’s more powerful U-series processors rather than the low-power Y series chips found in the previous Flip. That means better performance, but also the fans kicked in regularly, even if I wasn’t pushing things too hard.

Even that base model represents a big upgrade over the 2019 Flip, which had an m3 processor and a relatively paltry 4GB of RAM. Unsurprisingly, the $999 Flip C436 I used had no problem keeping up with my workflow, which isn’t terribly processor-intensive.. I usually have a couple Chrome windows going with six to 10 tabs in each, and then a host of Chrome apps in their own windows. Those include Todoist, Keep, Hangouts, Telegram, Trello, Tweetdeck and Slack; I also usually stream music with the Spotify or YouTube Music Android apps. The C436 has the same processor as the Galaxy Chromebook, but double the RAM. This meant I basically never hit any slowdowns or hiccups.

Last year’s Flip was a computer I could throw in my bag if it was charged and not have to worry about the battery running out, but unfortunately I can’t say the same for the Flip C436. I got a good nine hours of work time on the older Flip with its m3 processor, but this year’s model only lasted about six hours in my testing. That’s not terrible, but far from the exceptional performance I got out of the older Flip or Google’s Pixelbook Go. When running a playback test of an HD movie downloaded to the Flip’s local storage, it lasted seven hours and 55 minutes before shutting down. That’s not bad, but overall the laptop falls far short of ASUS’s estimates.

Throughout this review I’ve been comparing the Chromebook Flip C436 to the Samsung Galaxy Chromebook. As of this writing, the Flip C436 configuration that I reviewed is priced the same as the Galaxy Chromebook and has the same processor and a 360-degree hinge. Samsung’s offering has less storage and RAM, but it’s smaller in every dimension and lighter, as well. But probably the biggest differences are the 4K screen and stowable stylus, two things you can’t get on ASUS’s model. There’s a lot to like about the Galaxy Chromebook, but its terrible battery life means it’s hard to recommend.

Naturally, Google has a few models worth considering. 2017’s Pixelbook was a great computer when it launched, but it still costs $999; it’s a bit difficult to recommend a laptop that’s well over two years old at this point. It’s very well designed and can run Chrome OS well, but unless you really want a convertible form factor, Google’s Pixelbook Go is probably a better choice.

The Go doesn’t have a 360-degree hinge, but it does have a newer processor than the original Pixelbook. The Go is an all-around great Chromebook, with an excellent keyboard and long battery life. The base $649 model only has Intel’s m3 processor and 64GB of storage, but that’s probably enough for most people; spending $849 steps things up to an eighth-generation Core i5 processor, 8GB of RAM and 128GB of storage. That’s still less than the $999 Flip C436 I tested but again, it should be more than enough for most.

If these models are all too pricy, consider the ASUS Chromebook Flip C434 from 2019. The company says it’ll still be selling it, though it’s been out of stock in my recent searches. The processor isn’t as powerful, and it has less RAM and storage, but it still offers a great screen, keyboard and better battery life than the C436. With a price point just over $500, it’s a solid option.

With the Chromebook Flip C436, ASUS did a good job at addressing many of my complaints about last year’s model. It’s thinner and lighter; it also has a more powerful processor and more RAM and storage. But battery life took a hit and, most importantly, it’s much more expensive than before. The Flip line started out as a budget series but subsequent models have gotten more refined and powerful, and the cost has soared as a result. The base $799 model offers a lot for the extra money over the older Flip C434, but the $999 one that I reviewed is just too expensive unless you’re a Chrome OS fan for whom money is no object. It’s a good laptop, but mediocre battery life and a high price mean most potential buyers will be better off with a cheaper alternative.