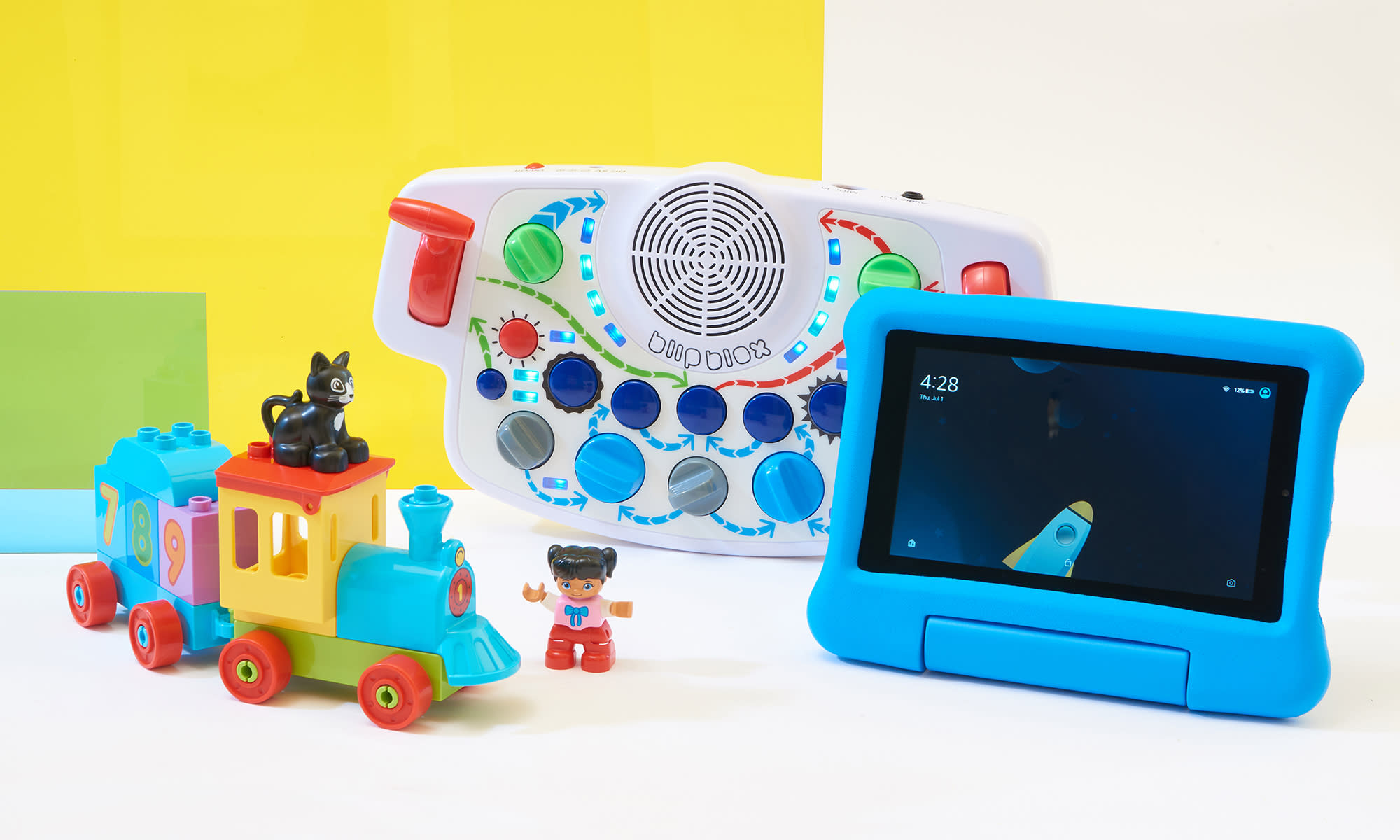 Feed their hungry brains with these engaging gadgets.

It’s tempting to get your kid every shiny new toy they ask for. But some toys are better than others when it comes to actually stimulating your child’s brain while also keeping them entertained. The parents on the Engadget staff know this well, and we’ve tried out a bunch of educational toys with our kids, with various results. These are some of the ones that have had staying power with our children — and even we adults have to admit we found them pretty fun, too.

When it comes to introducing kids to electronics there are a ton of options, but I personally like the Smart Circuits kit. It can take a kid from simple blinking lights to complex motion-controlled games. The snap-together baseboard can lie flat on a table like a regular breadboard, but it can also be folded into a cube or the pieces can be attached at a 90-degree angle. This gives kids an extra element to play with when they graduate to designing their own circuits.

The kit itself only has a few pieces, but they’re quite flexible. And they’re all housed in large colorful plastic that should be easy for a kid to handle. There’s the usual electronics kid fare, like LEDs, a speaker, a potentiometer and two buttons. But there’s also a tilt switch, a light sensor and a microprocessor capable of handling some relatively robust tasks. The kit comes with instructions for 50 projects, but with the parts available a creative child could build quite a few more.

My one critique is that the jumper wires can be tough to insert and might require a bit of patience — something we know not every eight-year-old has an abundance of. — Terrence O’Brien, Managing Editor

A shape sorter is an awesome toy for younger kids because it encourages hand-eye coordination, fine motor skills, problem-solving and even vocabulary (by identifying the names of shapes and colors). My kids have a few of them, but the one I like most is this Playskool model and here’s why. The lid latches, which means they can’t just dump the shapes out easily; they have to learn how to work the mechanics of the lid as well. Also, the multi-colored shapes have tactile patterns on them that match the area of the box they’re supposed to fit into, and that gives me another teaching opportunity. The whole thing is durable, too — my son likes to chew on the shapes and my daughter likes to stand on the box, but despite that abuse, there’s not so much as a dent or a scratch on it. And because it’s only $9, it makes a great gift if you’re buying for someone else’s kiddo. — Amber Bouman, Associate Editor, Parenting

The Yoto Player is the perfect toy for a young child who wants to play their own tunes and stories, but who isn’t ready for an iPad or smart speaker of their own. Yoto’s cute design and blocky, pixel-like display looks distinctly retro. It’s detailed enough for kids to make out images, but it’s insufficient for video, which should actually be good news for parents worried about too much screen time. Yoto calls the player a “carefully connected” speaker: You bring it online during the initial setup, but from there kids can access safe songs and other content through physical cards. — Devindra Hardawar, Senior Editor

While Amazon’s Fire tablets may not always be the best option for adults, the company’s kid-friendly models are a safe bet. Thanks to the included case, the Fire Kids Pro lineup is built to withstand frequent tumbles. The company offers adequate parental controls so you can keep tabs on content and includes one year of Amazon Kids+ for free. The Kids+ service offers access to over 20,000 apps, games, books, videos, songs and audiobooks from National Geographic, LEGO and more. You also get access to a digital store where you can install additional apps as you see fit. — Billy Steele, Senior News Editor

I am, admittedly, a sucker for a good subscription box. But Kiwi Crate is the only one that doesn’t feel like an indulgence. Each month my three-year-old gets a collection of simple DIY toys, crafts and games built around a theme. For instance, a recent box was all about bioluminescent animals. Inside was a plush lightning bug that we had to stuff ourselves and shape using hair ties; a mushroom that had us painting a Slurpee lid and then dotting it with glow-in-the-dark stickers; and a dancing, glowing jellyfish as well as several window clings of sea creates for him to create scenes with.

Past kits have covered farm life, dinosaurs and simple machines like ramps. The stuff inside the box is usually pretty simple (think: cardboard, felt and wood). It’s definitely not built to last, but my kid has gotten plenty of use out of each piece.

The best part is the crates will grow with him. As he gets older the projects will get more complex (and the price will go up). Later boxes include everything from screen-printing tools, to trebuchet kits and even robots. — T.O.

Sorry, folks, but this isn’t an electronic gizmo-toy that you can plug in, connect to the internet and treat it as somehow educational. As something of a traditionalist, I’ve always preferred solid toys that offer kids some license to imagine what’s going on, and this offers that in spades. Duplo’s My First Number Train is a train, with the coaches made from double-height number blocks running from 0 - 9. The aim is for your rugrats to place each block in chronological order and get familiar (almost subconsciously) with the concept of a number line.

Then, as they get a little older, you can do any number of things with the set, including (as we did) tie a ribbon around the chimney and fashion it as a pull-along train. Both my son and daughter (we bought one for each) love racing through the hallway with their pull-along trains. And, now that my daughter is in school, the train’s number blocks come in handy to help with the basics of her maths homework. Plus, it never hurts to have a surplus of double-height Duplo bricks for all of the (completely inaccurate) Frozen castles you’ll be building on Saturday mornings. — Daniel Cooper, Senior Editor

The Kano PC may look at first like a cheap Surface knock-off, but based on our testing, it’s also a perfect introduction to the computer world for young children. It’s partially DIY — the base unit is a Windows 10 tablet with a pre-installed CPU, memory and storage, but kids will have to plug in a colorful battery and speaker module to get it going. Kano encourages youngsters to take a close look at all of the PC’s clearly labeled hardware with the bundled magnifying glass. And once they get going, it’s still a decently capable Windows 10 PC, with a Celeron CPU, 4GB of RAM and a 1080p webcam. Heck, it even comes with a keyboard cover, something Microsoft still hasn’t bundled with the Surface tablets. — D.H.

The Blipblox may look like a simple noise-maker for kids, but this gadget is much more than just a toy. While the device is loaded with 300 melodies and a synchronized light show, it also packs a capable digital synthesizer engine. There’s an oscillator with the usual assortment of synth parameters along with an amp envelope, two LFOs, modulation envelope and a low-pass filter. The Blipblox also has a MIDI input for use with a keyboard or other accessories in addition to a ¼-inch output. Lastly, it runs on three AA batteries or plugged in via a USB cable. Blipblox can teach kids about music through a basic approach to instruments and synthesis, but its features are advanced enough to offer noise-making magic for parents, too. — B.S.

My kids are currently fascinated with snaps, zippers and closures, which is fun because it means it’s easy to amuse them, but awkward, too, because they often decide to undo the closures on the shirt I’m wearing. A busy board capitalizes on this curiosity by offering several different clasps, snaps, zippers, buttons and openings for little ones to work their fingers on. It intrigues children by activating their senses and helps them develop their fine-motor skills and problem solving by using real-world obstacles. It also adheres to the Montessori philosophy of simple, wooden toys that help children explore the world around them through play. The deMoca busy board is one of my favorites because it has bright, eye-catching colors, and 10 sensory activities including a zipper, a buckle, a latch and Velcro. It’s easy to bring along on trips, and deMoca also makes a “Quiet Book” — a soft-cover, fabric version that’s washable. — A.B.

The best gadgets for students under $50

The best budget TVs and streaming gadgets for students

The best student discounts we found for 2021

The best study-from-home essentials for students

How to clean and organize your PC