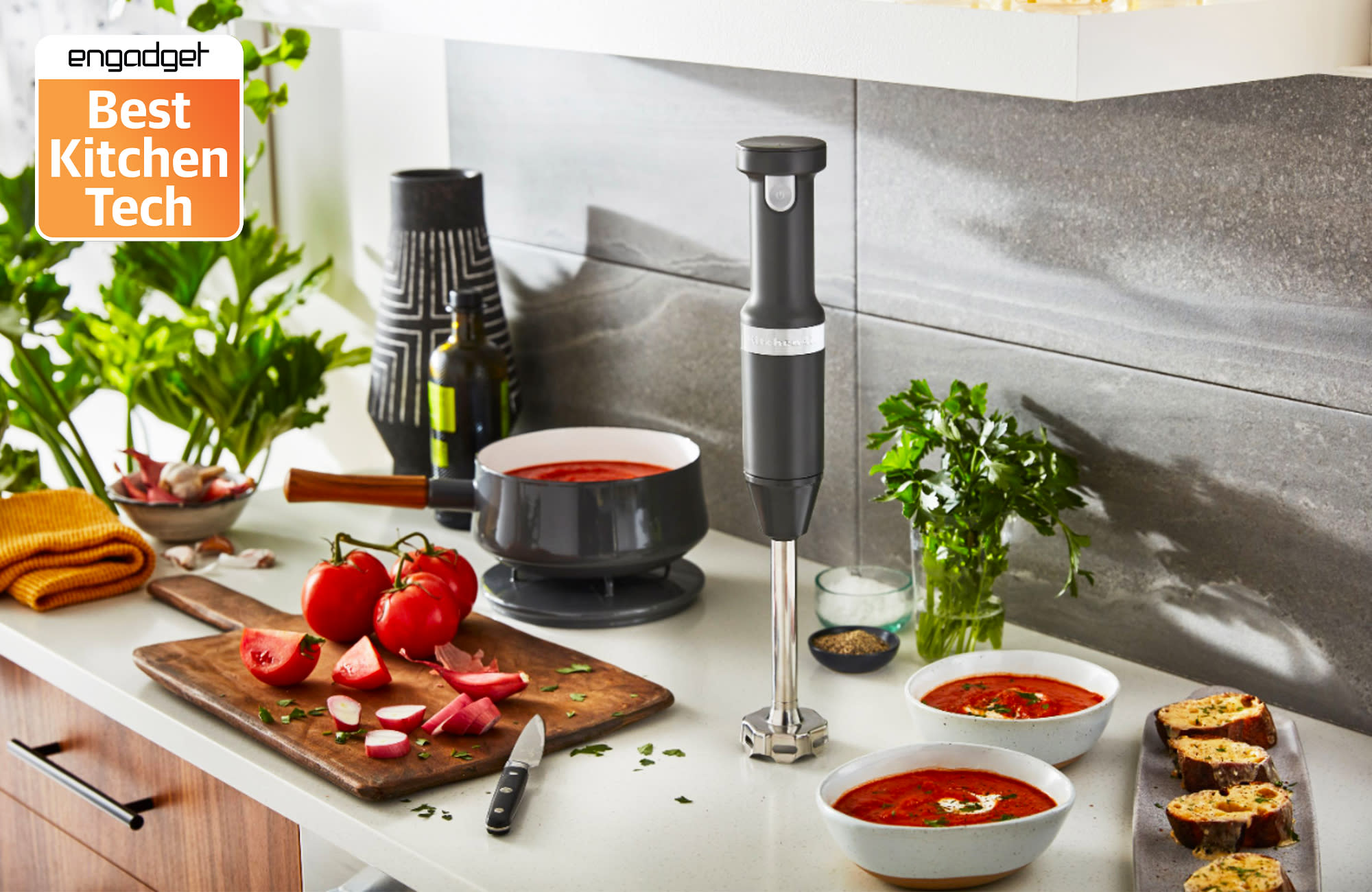 The best immersion blenders you can buy

For when you don’t have the space or the dough to buy a countertop model.

S. Rutherford
@samrutherford
May 23, 2022 3:00 PM
In this article: thebuyersguide, gear, breville, evergreen, best tech, feature, shopping, kitchen22, kitchenaid, commerce, streamshopping, hamilton beach
All products recommended by Engadget are selected by our editorial team, independent of our parent company. Some of our stories include affiliate links. If you buy something through one of these links, we may earn an affiliate commission.

Back in the 80s and 90s, immersion blenders were often restricted to high-end restaurants and the kitchens of nerdy home cooks. But thanks to improvements in tech, immersion blenders (also known as hand or stick blenders) have become powerful and affordable general-purpose cooking gadgets – especially for people who might not have the space for a traditional countertop model. Unfortunately picking the right one for you can get a bit confusing, so here’s a guide covering the important things you need to consider, along with our favorite devices across a handful of categories.

Which device is right for you?

Before you even think about buying a new kitchen gadget, it’s important to figure out how you’re going to use it and where it fits in with any appliances you already own. In an ideal world, everyone would have a dedicated food processor, countertop blender and a stand mixer. But the reality is that many people don’t have the room or the budget.

While immersion blenders and traditional countertop models have a lot of overlap, there are strengths and weaknesses to both. For example, if you’re looking to make smoothies every day, a countertop blender might be a better choice. The bigger pitchers make it easier to blend drinks for multiple people at once, while larger motors will make short work of ice and frozen fruit. Additionally, more expensive options like those from Vitamix or Robocoupe can even cook soup during the blending process using the heat generated from the blender’s motor, which isn’t something you can do with an immersion model. I’d even go so far as to say that if you have the space for it and don’t own a blender of any kind, a countertop version is probably the best option for most people.

That said, immersion blenders are often less expensive and, thanks to a wide variety of accessories offered by some manufacturers, they can be great multitaskers. A whisk attachment allows you to make whipped cream or meringues quickly without needing an electric hand mixer, or risk getting tendonitis in your elbow doing it manually. Some immersion blenders also come with food processing bowls, so you can easily throw together things like a homemade pesto in minutes. And because immersion blenders are smaller and less bulky than traditional models, they're a great choice for apartment dwellers or anyone with limited storage or counter space. That means if you’re simply trying to expand your culinary repertoire without blowing up your budget, an immersion blender can be a great way to try something new without committing too hard.

Similar to figuring out if you should get a blender or not, trying to decide between a corded or cordless model depends a lot on the other gadgets you already own. Corded versions typically have more powerful motors, which makes them great for people who don’t have a countertop blender or food processor. But if you do own one of both of those, cordless is the way to go. Not only do you get the convenience of not worrying about wires, but the ease of use makes it fast and easy to whip out your immersion blender to add some extra texture to a soup or sauce.

A quick word about safety

No one should be ashamed of being nervous around a device that is essentially a motorized wand with a spinning blade at the end. But with proper care and use, an immersion blender doesn’t have to be much more dangerous than a chef’s knife. The most important safety tip is to make sure you always keep the sharp end pointed down and away from you or anyone else nearby. That includes your hands, along with any utensils (like a spoon), that might be in or around your mixing bowl.

Thankfully, all consumer immersion blenders are designed to prevent their blade from directly hitting the vessel holding your food (be it a mixing bowl or a pot). However, to be extra safe, you should avoid blending things in glass containers or non-stick cookware, as glass can chip or shatter while the metal blades and shroud of an immersion blender can damage teflon and ceramic.

You’ll also want to make sure you keep water away from the plug or outlet of corded immersion blenders. And if you want to remove the blade or clear away any food that might have gotten tangled, first make sure the blender is off and disconnected from its power source (either its battery or wall socket).

On the bright side, cleaning an immersion is rather simple and straightforward. All you have to do is fill up a bowl or cup with soapy water, submerge the immersion blender, and then run it for 10 to 20 seconds. That’s it. If it’s still not clean, you can repeat that process again until it is. And if that’s too much work, the blending arms on a lot of models (including all of the gadgets on this list) are dishwasher safe too.

Starting at $120, Breville’s Control Grip not only has one of the most powerful motors (280-watts) available on an immersion blender in this price range, it also comes with a wealth of handy accessories. In addition to the main 8-inch shaft/immersion blade, the kit features a 25-ounce chopping bowl for cutting and mincing and a 42-ounce blending jug for making soups and smoothies. There’s also a whisk attachment, which means that between all of its accessories, the Control Grip can take the place of three different common kitchen gadgets: a food processor, blender and hand mixer.

I also appreciate the two-button attachment system, which ensures accessories are properly locked in before use. Breville even includes a removable blade guard to help prevent the blender from scratching your other appliances in storage. And with support for 15 different speed settings, there’s a lot of flexibility to handle all sorts of dishes. Alternatively, if you’re looking for an all-purpose immersion blender with even more attachments for making drinks and sauces, you may want to consider KitchenAid’s 5-Speed Hand Blender, which comes with two extra bell blades to help crush ice, froth milk and more.

If you just want an immersion blender that’s simple and easy to use, KitchenAid’s Cordless Variable Speed Blender is the one to get. It comes with a dishwasher-safe blending jar and an optional pan guard to help ensure you won’t nick your cookware. However, the real nifty feature is that instead of having discrete speed settings, you can adjust the blender’s 180-watt motor simply by squeezing down on the trigger. This makes using it incredibly intuitive, and thanks to its built-in safety switch, it’s much more difficult to spin up the blade by accident.

KitchenAid also claims the battery can blend up to 25 bowls of soup on a single charge. And while my kitchen is too small to test this properly, I never ran into any issues. That said, you’re going to want to make sure to top off its battery beforehand because its charging port is next to where you attach the blending arm, which means you can’t have it plugged in while it's running.

For those who want something that’s versatile and a great value, Hamilton Beach’s 2-Speed Hand Blender is a great pick. While it isn’t cordless, in addition to the main blending arm you also get a whisk attachment and a chopping bowl – all for just $35. On top of that, its 225-watt motor is rather powerful for its price, though you don’t get as many speed settings as you would on more premium rivals. With this thing having been on the market for more than 15 years, this blender has long been a top choice among budget-conscious cooks.