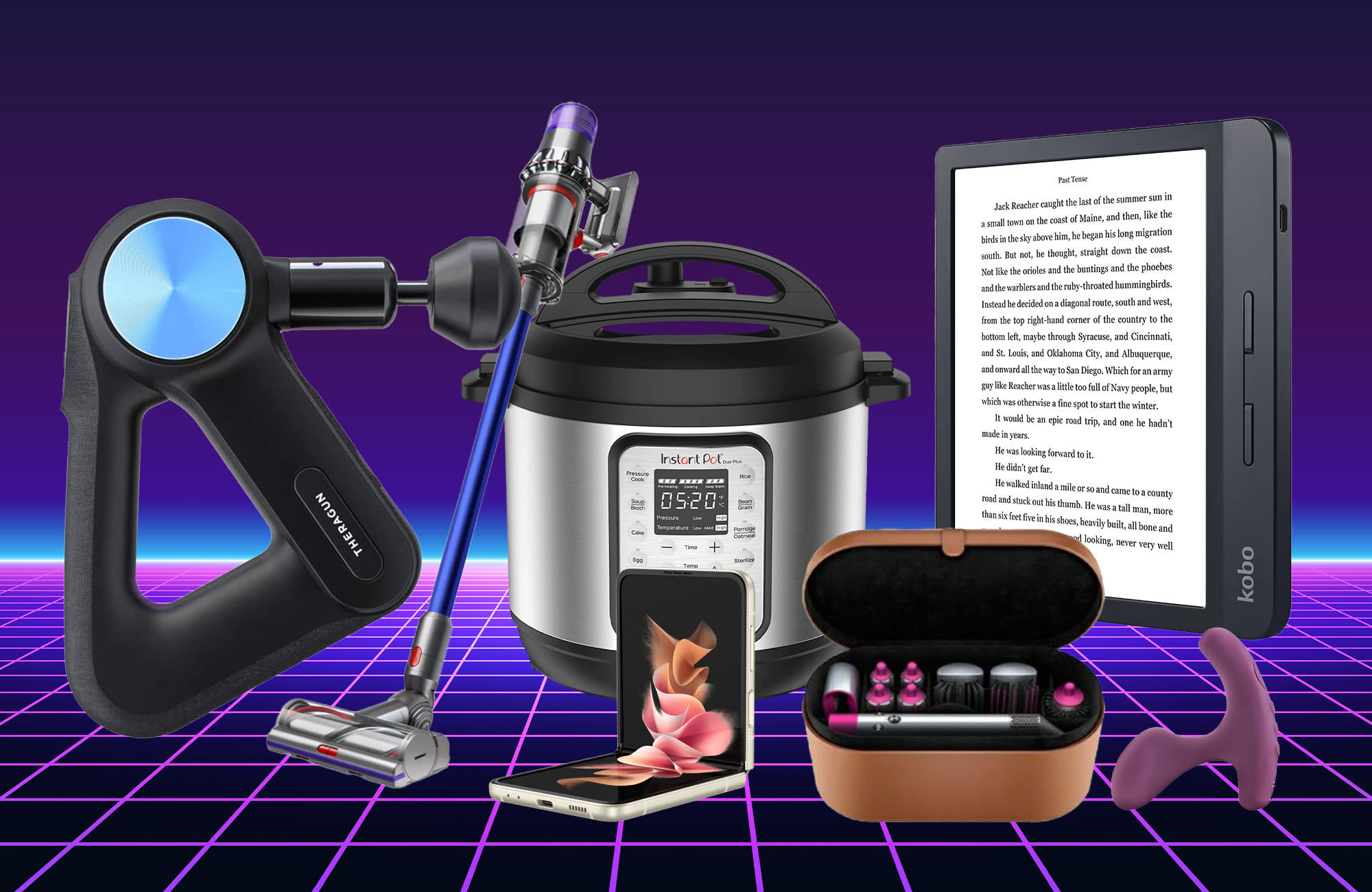 Yes, a vacuum is fun.

Engadget
@engadget
November 11, 2021 10:30 AM
In this article: thebuyersguide, holiday21, holidaygifts21, gear, lioness, theragun, dyson, instant pot, lora dicarlo, samsung, tamagotchi, best tech, feature, shopping, AMZ-Holiday21, kobo, commerce, streamshopping
All products recommended by Engadget are selected by our editorial team, independent of our parent company. Some of our stories include affiliate links. If you buy something through one of these links, we may earn an affiliate commission. All prices are correct at the time of publishing.

We at Engadget spend a lot of time thinking about the best tech gifts for anyone and everyone in your life. But during that process, we often can’t help but think about the things we’d like to receive as gifts. We encourage everyone to treat themselves in some way while scrambling to find gifts for those they love, and it’s about time we take our own advice. Here, we’ve compiled a list of gadgets on our staffers’ wish lists with the hope that it may inspire you to splurge a bit on yourself this year.

All I wanted as a kid was a Tamagotchi and my parents knew it. When I was eventually given one, I spent hours doting on my virtual pet, doing my best to keep it alive and happy. Even now, a couple of decades and the addition of one cat later, there remains a soft spot in my heart for Bandai’s egg-shaped toy. Although I’d probably have less patience now for a beeping Tamagotchi in distress, I’d be overjoyed if someone dropped one onto my doorstep like a proverbial stork with a baby basket. Part of me wants to see how long I can keep the thing alive, and part of me wants to once again experience that childlike wonder inspired by a new toy that will, inevitably, suck up time that I don’t have to spare. — Valentina Palladino, Commerce Editor

Turn on browser notifications to receive breaking news alerts from Engadget
You can disable notifications at any time in your settings menu.
Not now
Buy Tamagotchi at Amazon - $20

One of the ways you know you’re a full-fledged adult is when a new vacuum excites you. I definitely fell for the hype surrounding Dyson cordless vacuums and thankfully, when I pulled the trigger and bought myself the V11 Torque, I was happy to find the machine to be just as good as everyone said. It is, without a doubt, the best vacuum I’ve ever owned even if it’s slightly less convenient than a robot vacuum that I can set and forget. The suction power is remarkable — it captures cat hair that I can’t even see around my apartment — and the various adapters that it comes with lets me clean my couch, cushions and even hard to reach areas like baseboards and room corners. It has three cleaning modes with various suction levels and battery lives, but I’ve never had to stop mid-cleaning to charge it.

But you may struggle to find the V11 Torque right now. Although it’s only about a year old, it’s basically been replaced by newer Dyson cordless vacuums like the Dyson Outsize and the V15 Detect, the latter of which uses a laser to illuminate dust on your floors. Regardless of whether you get a refurbished model or splurge on the latest and greatest, a Dyson cordless vacuum is the mother of all “adulting” gifts. — V.P.

Dyson’s beauty gadgets are more expensive than most, but boy are they worth it. Sure, its hairdryer is orders of magnitude pricier than those you’d find in a drugstore, but it lasts longer and makes your hair look smoother. The Dyson Airwrap is also quite costly, but it pulls triple duty as a curler, straightener and dryer. Your friend can get tight coils or sleek tresses with the hot rod and its accompanying attachments, and thanks to the temperature limit of 302 degrees Fahrenheit, their hair won’t burn to a crisp.

If you can get a group of friends to chip in, this would be a lovely present for a bride-to-be or glamorista who loves playing with different styles. Plus, since we’re all cutting down on going out to stylists due to the pandemic (or when it’s awfully cold out), this can keep you chic buddy perfectly coiffed all winter. — Cherlynn Low, Reviews Editor

Time is the most precious gift one can receive as an adult, and the Instant Pot Duo Plus delivers it in spades. The pot will help your lucky recipient focus more on enjoying dinner than preparing it, and might save them from buying a host of counter-cluttering appliances. They can start cooking a stew in the morning and serve up in the evening, for instance. This may be just the ticket for a loved one who’s eager to make slow-cooked meals, or craves a pressure cooker to make short work of a time-consuming roast.

However, the Duo Plus may be particularly helpful if that recipient is a new parent. They can easily sterilize baby bottles and food jars, or produce healthy meals like sweet potatoes and yogurt. This could easily be one of your special someone’s most-used gadgets, and it might be useful for the whole family long after the novelty wears off. — Jon Fingas, Weekend Editor

For various reasons, I’ve been slowly weaning myself off Amazon over the past few years. I try to support local independent bookstores as much as possible, and I’ve turned to Libro.fm for my audiobook needs. I do still use my Kindle, however, when I want to read ebooks from the library. That’s what made me look into non-Amazon e-readers, and Kobo’s line of devices caught my eye. In particular, Kobo’s Libra H2O looks like a viable alternative to Amazon’s top-of-the-line Kindle Oasis. It has the same premium features including physical page-turn buttons, a large 7-inch screen, color temperature adjustment and it’s waterproof, to boot. What’s more, it’s also significantly cheaper than the Oasis. This just might be a gift I give to myself. — Nicole Lee, Senior Editor

Those who already know what they enjoy can still appreciate the biofeedback either by letting the app convert their results into artwork or by looking out for patterns. Most importantly, the info about orgasms can help broach potentially awkward conversations about one’s preferences between the sheets and bring great Os all around. — C.L.

Samsung’s best foldable might be the truly pocketable Galaxy Z Flip 3. Unfurling into a more typical looking 6.7-inch-inch phone, you get the premium screen, build quality and cameras of a flagship Samsung phone, while also drawing a crowd of curious onlookers whenever you flip it out. And flipping it open and shut, is just so darn satisfying, you won’t need much of an excuse to show it off.

Making the most of the still-new form factor, the Flip 3 includes a Flex mode when you half-fold the phone. It’ll work on Camera and YouTube apps (as well as others), splitting the screen in half to show your content on the upper half, and controls and detail on the lower half, like a sort of mini laptop.

Due to its $1,000 price tag, it’s up against the very best flagship smartphones — including Samsung’s other devices — but this is a statement phone, a conversation starter. You can’ t really say that about the latest iPhone. — Mat Smith, UK Bureau Chief

I was gifted the Theragun Mini and it’s become a big part of my recovery routine. I run three to four times a week and strength train on top of that, and the Mini has helped work out knots in my hamstrings, calves, shoulders and (most importantly for me) lower back. If I had been given the Theragun Pro originally, I would have been intimidated by it. But now? I would be thrilled. As its name suggests, this is the company’s top of the line percussion massager with a rotating arm, a high-powered motor, two swappable batteries and a mobile app that lets you control speed. It also uses QuietForce technology to keep the noise level at a minimum and that should prevent you from waking anyone up while you’re using it.

The Pro gives you more control than the Mini does, not only with its companion app, but also in its ergonomic grip and the on-device buttons that let you adjust speed and force. Since I’ve never had a true massage in my life, I can’t say for certain if the Theragun Pro could replace that experience entirely — my guess is that it couldn’t, but it might get close. But if you’re someone who wants the instant gratification that comes from basically being your own masseuse, the Theragun Pro could help you get that. — V.P.

The best gifts for the aspiring influencer in your life

The best gifts for the coffee nerd in your life

The books and movies we’re gifting this year

The video games we wish someone would gift us

The best gadgets for your pets

The best gifts for the creatives in your life

The best snow and winter sports gear to gift this year

Everything in our gift guide under $100