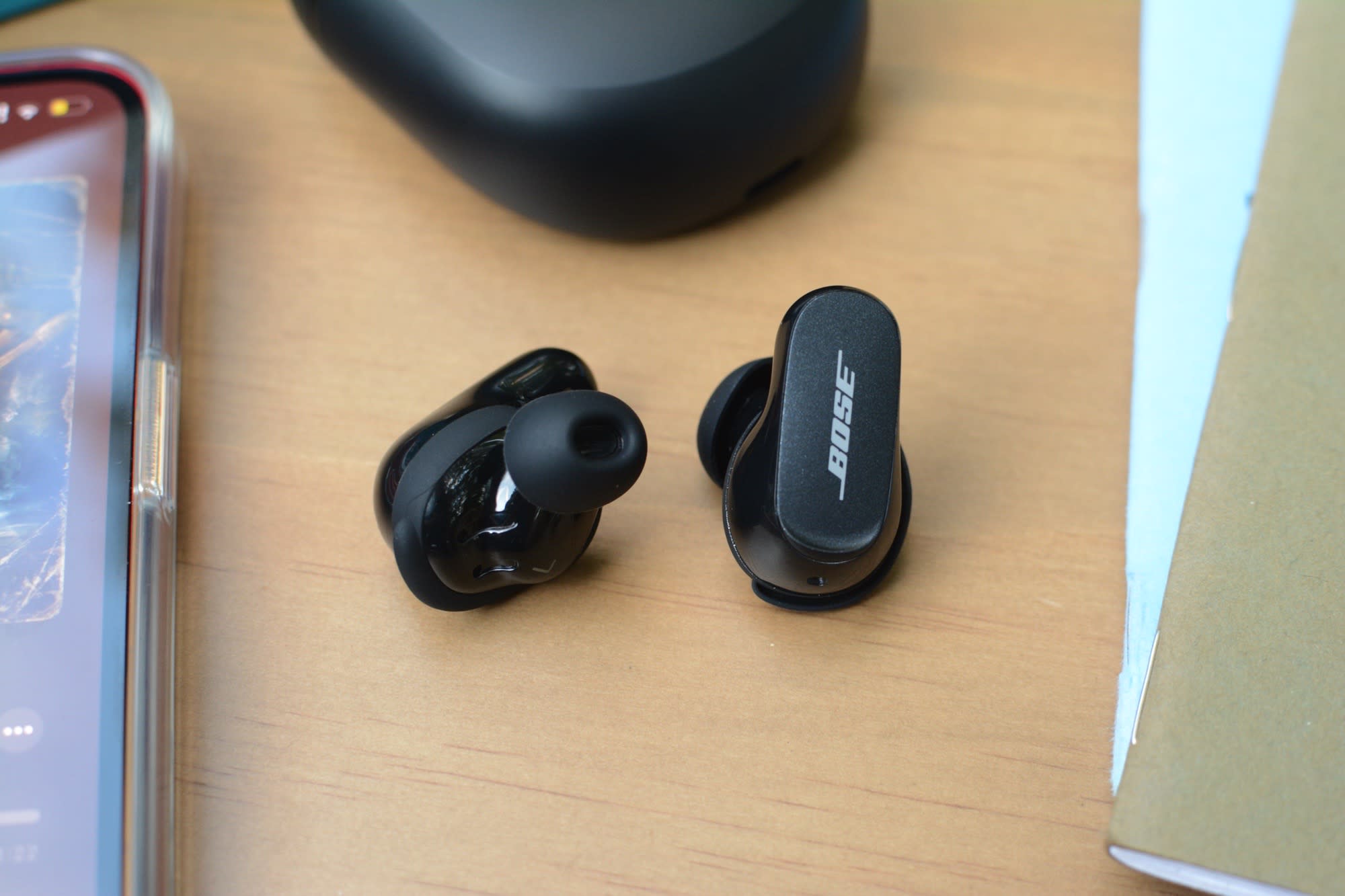 Bose is no stranger to true wireless earbuds. The company’s first model debuted in 2017 and it has refined its take on the product segment multiple times in the years since. Bose made a big leap in 2020 with the QuietComfort Earbuds, bringing its active noise cancellation (ANC) expertise to an updated true wireless design. Now the company has made another big jump with a new look and a host of upgrades thanks in part to its CustomTune technology,

With the $299 QuietComfort Earbuds II (QCE II), Bose has massively improved its already great noise canceling abilities, blocking more than ever before. The company’s tech also calibrates its new buds to your ears while improving ambient sound in addition to overall audio performance. A smaller size leads to a more comfy and less awkward looking fit as Bose offers a more complete package to compete with the likes of Sony and Sennheiser.

Even Bose will tell you the first QuietComfort Earbuds were too big. They looked more like a pair of Bluetooth headsets than modern true wireless devices. The company says the QCE II are a third smaller than the previous generation. They still have a bit of that headset look with a stem that points toward your jaw, somewhat like AirPods. Bose also ditched the larger fit wing for a “stability band” to help hold the earbuds in place. That and the ear tips are now separate, so you can mix and match sizes as needed.

Beyond the smaller size, the QuietComfort Earbuds II just look more refined than the first model. The 2020 version had a very plain design: a flat oval that extended from your ears in a rather unflattering manner. This new model doesn’t protrude as much and its detailed curves not only look better, but offer a more comfortable fit too. Bose retooled the charging case as well, opting for a vertical box that flips open at the top. The earbuds rest vertically inside, rather than laying flat like the original QCE.

On that slimmer outside panel, the QuietComfort Earbuds II accept a range of touch controls for music and calls. All of the basics are covered here and there’s a customizable long press action that can be configured to switch between sound modes or to summon a voice assistant. The panel will also allow you to swipe up or down for volume control, all of which work reliably. The only issue I noticed was a slight delay on the volume slider. I would regularly swipe too far in my impatience for the earbuds to accept my request, going too quiet or too loud and mumbling in frustration all the while.

Access to all the available settings on the QuietComfort Earbuds II can be found inside the Bose Music app. Once paired, it will display battery levels for each bud above a volume slider and shortcuts to sound modes, Bluetooth connections, EQ customization, reconfiguring the long press function and product tips. The Bluetooth item is simply a list of up to seven devices as the QCE II doesn’t offer multipoint connectivity. You can dive further into the proper settings menu for things like in-ear detection and Self Voice, or how much of yourself you want to hear during calls. The app also has an ear tip fit test to check for a proper seal for noise canceling purposes.

For the sound modes, Quiet (active noise cancellation) and Aware (transparency mode) are the defaults. You can also create your own somewhere in between full ANC and full ambient sound. What’s more, you can save those as presets, with pre-selected labels like Commute, Focus, Workout and more. And thanks to CustomTune sound calibration, the QuietComfort Earbuds II are capable of blocking harsh environmental noise – even in Aware mode.

CustomTune measures the acoustics of your ears every time you insert the QuietComfort Earbuds II. The process takes less than half a second according to Bose, using an audible tone to make the calculations. Bose says CustomTune fully optimizes the sound frequency profile to the unique properties of every ear, so the sound “reaches the eardrum just as the artist intended."

The technology also lends a hand with ANC and ambient sound. For active noise cancellation, CustomTune calibrates the noise reduction signal, which is noticeably better at blocking voices and crying babies than the previous model. For transparency mode, the QuietComfort Earbuds II can pick up harsh noises and apply a level of sound blocking so that they don’t startle you or damage your hearing. It’s an aspect of CustomTune called ActiveSense.

For Aware mode, CustomTune helps keep those wanted environmental sounds “as natural and lifelike as possible.” I don’t understand why most headphone companies are bad at transparency mode, with Apple being the lone exception. Almost always, the sound is muffled and far from “natural” as it’s obvious you still have something crammed in your ears affecting volume and quality. Bose doesn’t best Apple, but it’s a marked improvement. While you’ll still notice you have the buds in, the overall audio is clearer, which also helps you keep from shouting your cortado order at the barista.

The biggest leap on the QuietComfort Earbuds II is the ANC, but we’ll get to that shortly. First though, you should know that Bose has also made strides in the audio department. Since CustomTune does its thing automatically and I haven’t found a way to disable it, I don’t have a frame of reference for whether or not that fraction of a second makes a difference in overall sound quality. What I can tell you though is that the QuietComfort Earbuds II are a big improvement over the first version.

I’ve always thought the audio on Bose’s headphones was fine. It never blew me away, but it did a good enough job to complement the company’s noise blocking abilities. On the QuietComfort Earbuds II, the sound is much more dynamic and open. I notice it most in the nuance of the low-end, specifically when it comes to things like kick drums and synths. There’s texture and detail to those bassy elements – they aren’t just generic boomy thumps. This is apparent on tracks like Russian Circles’ “Tupilak,” Dua Lipa’s “Levitating” and Hardy’s “Wait In The Truck.”

There’s also an increased dimensionality to the sound on the QCE II. I talk about open sound a lot, a term I use for audio quality where things seem to exist in space rather than being a compressed mess. Here, instruments stand on their own, creating depth in addition to even-handed tuning. The drums on Boz Scaggs “Lowdown” and the thunder and sirens in the aforementioned Hardy track are good examples of this, and the effect is heightened even more when details are actually moving across channels.

When it comes to active noise cancellation, that’s where the QuietComfort Earbuds II really shine. Sure, it’s to be expected with a Bose product, but the improvements the company has made from one generation to the next are night and day. The first QuietComfort Earbuds were plenty good at reducing distractions, but version 2.0 can fully block out the world – to the point you’ll forget anyone else is around. In fact, I’d argue this is the best ANC performance you’ll find in a set of true wireless earbuds right now.

Things like vacuum cleaners, dishwashers, dryers and white noise machines are all completely canceled out. True to its promise, Bose has improved its ability to block human voices too. Even if someone is taking a call right behind you, that conversation is much less of a distraction on the QuietComfort Earbuds II. You’ll still hear them, but not nearly as much.

For calls, Bose says microphones on the QuietComfort Earbuds II can filter environmental noise to keep the focus on your voice. Lots of companies make claims about call clarity that ultimately end up with you still sounding like you’re on speakerphone, even if the earbuds do manage to reduce the background clamor. Performance is slightly improved thanks to that Self Voice feature allowing you to adjust how much of yourself you hear during calls, your voice still sounds muffled coming through the buds, though.

Overall call quality is pretty mediocre here. You sound like you’re on speakerphone and background noise like a television or running water comes through clearly. This is another case of yes you can use these for calls, but they’re not great and you’ll want to be in a quieter spot when doing so.

Bose promises up to six hours of battery life with ANC on, and three additional full charges via the case. It doesn’t support wireless charging though, which is a major bummer on a set of $299 earbuds. There is however a quick-charge feature that will give you up to two hours of playback in 20 minutes. During my tests, the results were just below Bose’s figures, and I managed five and a half hours before having to doc the buds in the case.

The closest alternative to the QuietComfort Earbuds II are Sony’s WF-1000XM4 that debuted last year. They too are much smaller than their predecessors with great sound quality, solid ANC, wireless charging and support for 360 Reality Audio. I wasn’t a fan of the new ear tips and the redesigned buds are still plenty big, but Sony consistently offers the most robust set of features. Plus, even at full price ($280) they’re cheaper than Bose’s latest, and we’ve seen the M4s as low as $218 which could be enough savings to sway your opinion. For all the work Bose has done on ANC, Sony’s flagship buds are still better in terms of pure sound quality.

If audio is your primary concern, Sennheiser’s Momentum True Wireless 3 should be your other consideration. The company is consistently at the top in terms of sound, with a mix of clarity and detail on top of a bassy punch that is rarely rivaled. At $250, they’re cheaper than both Bose and Sony, but you’ll have to sacrifice the best-in-class noise cancellation on the QCE II and the deep feature set of the 1000XM4.

If it’s supreme noise blocking you’re looking for in your next set of true wireless earbuds, the QCE II is the choice. With the updates Bose delivers here with the help of CustomTune, not only is the ANC noticeably better than the previous model, but overall audio quality and ambient sound mode are also improved. Sure, I’d like more than six hours of battery life and conveniences like multipoint connectivity and wireless charging should be standard fare at this point. For $299, I’d expect some of those basics to be included and Bose passed on them.