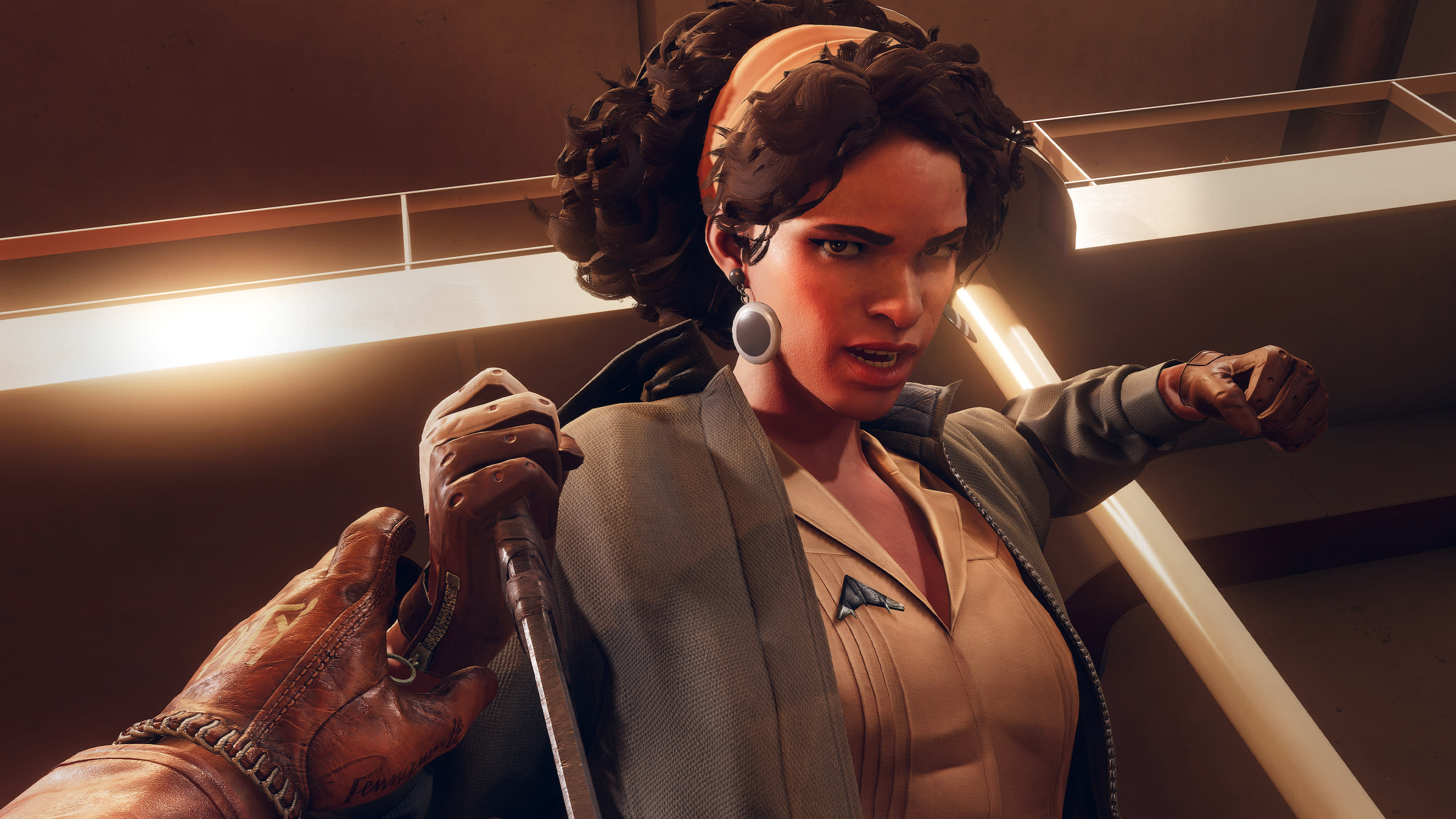 And I'm loving every minute.

Deathloop is the coolest escape room I’ve ever experienced. That may not sound like much, considering plenty of escape rooms are cheesy monuments to corporate team-building exercises and gentrification, but I mean it as a compliment. Deathloop uses the fundamentals of old-school locked-room mysteries to deliver a rich and stylish universe driven by intrigue, action and strategy. The main difference between Deathloop and an actual escape room is, well, all the death.

Unsurprisingly, there’s a fair amount of dying in Deathloop. Dying is a core mechanic of the game, and it’s the first thing players actually do in the campaign, called Break the Loop. The opening scene has Colt, the main character, on his back with a murderous woman called Julianna sitting on top of him, pressing a massive blade to his chest. After some banter, she plunges the knife into Colt’s heart, and he sputters and dies.

And then the game begins. Colt awakens on a cold, empty beach littered with bottles, and he makes his way to a compound built into the side of the sea wall. As he walks, glowing words appear around the environment, as if a loved one is leaving words of encouragement and warning for him. Colt is confused — he doesn’t even know his own name at this point, let alone how he got here or who’s trying to talk to him.

The identity of the message-writer is just one of a dozen or so core mysteries in Deathloop, and these are the driving force of the campaign. Colt’s job is to explore Blackreef, the island where he’s been trapped in an infinite respawn cycle, and learn as much about its leaders and technology as possible, in order to burn it all down. Blackreef is a retrofuturistic bubble populated by residents who split their time between partying and violently defending their consequence-free way of life, and Colt can either sneak or shoot his way through their ranks.

In action, Deathloop feels a lot like Dishonored (of course), with a chaser of We Happy Few and Quadrilateral Cowboy. It’s mechanically mature and narratively dense, but best of all, it doesn’t take itself too seriously.

Deathloop is one of the few first-person action games that I can successfully play in stealth mode, silently taking down enemies, hacking turrets and sniping from the rooftops in order to stay alive. Usually with games like this — I’m thinking Deus Ex and Far Cry — I intend to play stealthily, but it doesn’t work out. I get too close to an enemy, or miss my headshot, or forget about that security camera, and I end up just throwing a grenade and emptying my magazine, recklessly running into danger.

Deathloop invites the kind of stealth that I can sustain. The environments are endlessly climbable, offering plenty of vantage points for Colt to survey and mark his enemies, tracking their movements and revealing the kinds of weapons they’re carrying. If something in Deathloop looks scalable, it likely is, opening up the game world in all directions. Additionally, if I accidentally alert the enemies in one location, I don’t feel like I have to abandon my plans and roll in guns blazing. Generally speaking, I can find some cover, pick off the folks that follow me, and return to the rest of the mission in stealth mode. My favorite weapons in these moments are the Tribunal and the PT-6 Spiker, both of which are silent and deliver instant-kill headshots.

I’d like to blame the success of Deathloop’s stealth mechanics on my own skills or the masterful sense of level design coming out of Arkane Studios, but it might just be the game’s hit-or-miss AI. There are times it feels too easy to sneak up on enemies, and moments when they fail to react appropriately to Colt’s presence, standing still for seconds too long, piling up in hallways or ignoring nearby scuffles. It’s not every encounter, and there are still plenty of moments when I’m bested by the NPCs, but it’s enough that I’d classify the enemy AI in Deathloop as OK, rather than good.

Along his way, Colt picks up a variety of weapons and ultra-high-tech artifacts that grant him special abilities and perks. There are Trinkets, which are small glowing items that enhance whatever gun they’re attached to, and Slabs, which give Colt — and his enemies — superhuman powers like invisibility, telekinesis and short-distance teleportation. Once collected, the Slabs are swappable in Colt's loadout, and they tend to be tons of fun.

Blackreef is controlled by eight Visionaries of the AEON Program, one of whom is Julianna, and the only way to escape the island is for Colt to kill them all in a single day, breaking the loop. However, it’s not as simple as speedrunning through Blackreef in order to take them all out. Colt has deep ties to the AEON Program and the Visionaries all keep their own schedules, meaning a successful assassination run will require hours of information-gathering and strategizing. And, it turns out, dying.

Once he gets going, Colt is able to die twice during any playthrough with few consequences; he’s simply transported to a previous location and allowed to keep going, health restored. On the third death, however, he’s sent back to that bottle-lined beach, resources depleted.

He also loses his gear after a full day of activity, regardless of progress. Deathloop is divided into four times — morning, noon, afternoon and night — and after each complete sequence, Colt is beached. Certain missions can only be completed at specific times of day, so players have to plan their attacks accordingly, either shifting time forward or simply delaying until the next loop.

Eventually, Colt gains the ability to carry some slabs, trinkets and weapons with him between loops, though he has to infuse the items he wants to keep with a resource called Residiuum. Colt can harvest Residiuum from the shiny, glitched-out objects in Blackreef, or by killing visionaries and absorbing their energy. Residiuum can then be applied to specific items in Colt's kit, holding them for good.

With all of these trinkets, slabs, weapons, Residiuum, visionaries and loops, there’s a lot to keep tabs on in Deathlooop. The amount of stuff in the game is overwhelming at times, and it’s complicated by an intense plot filled with overlapping, time-bending mysteries. Small scraps of paper and brief audio recordings often contain crucial bits of information, rewarding players who obsessively explore every bookshelf, desk and dead-end with reams of notes and leads. The game does a good job of organizing all of these details in the resource-management screen, but overall, Deathloop demands full and complete attention, lest you completely lose the plot.

For those who pay attention, the story and environment of Blackreef unravels beautifully, with important secrets hidden in plain view, and new parts of the world opening and closing depending on the time of day. From this perspective, the density of things to collect, use and learn in Deathloop makes perfect sense. This game is built on the idea of replaying the same four maps again and again — Colt needs something new to do every time.

Julianna is a charming constant in Deathloop, generally talking shit and fleshing out the background of Blackreef. She’s also the star of the game’s second mode, Protect the Loop. Here, players are able to invade the games of friends or strangers, playing as Julianna and hunting down Colt as he tries to complete a mission. She has her own loadout, trinkets and slabs, including a masquerade ability that lets her trade appearances with allied NPCs — meaning, everyone except Colt.

Protect the Loop is marked by long periods of silence and inactivity, followed by furious gunfire and death. Colt can take any route he wants through the various maps, and Julianna has to actively hunt him down or wait for him to appear near the objective. She may be able to disguise herself, but she only has one life, while Colt has to die three times to make it final. This results in a delicious cat-and-mouse game that’s different with each new player.

That said, Protect the Loop is also where I’ve encountered the most technical issues. I played on PS5, and one round crashed fully right after launching, while two more were completely unplayable from my end, repeatedly setting my Julianna back a few frames until Colt finally showed up and shot her. That’s in comparison with four glitch-free rounds. My recommendation here is to use an ethernet cable, rather than Wi-Fi, and make sure your friends do, too.

Deathloop is incredibly dense, but it’s also inherently forgiving. Relying on death as a mechanic in Break the Loop takes the sting out of failing a cycle or two, since retrying is built into the narrative. Colt uncovers helpful information in most of his runs, even when he ends up dead — like, dead dead — and it feels like there’s always something new to uncover in Blackreef, no matter how many times he returns to the same location. If it does ever get old, there’s always the option to Protect the Loop.

You get the idea.