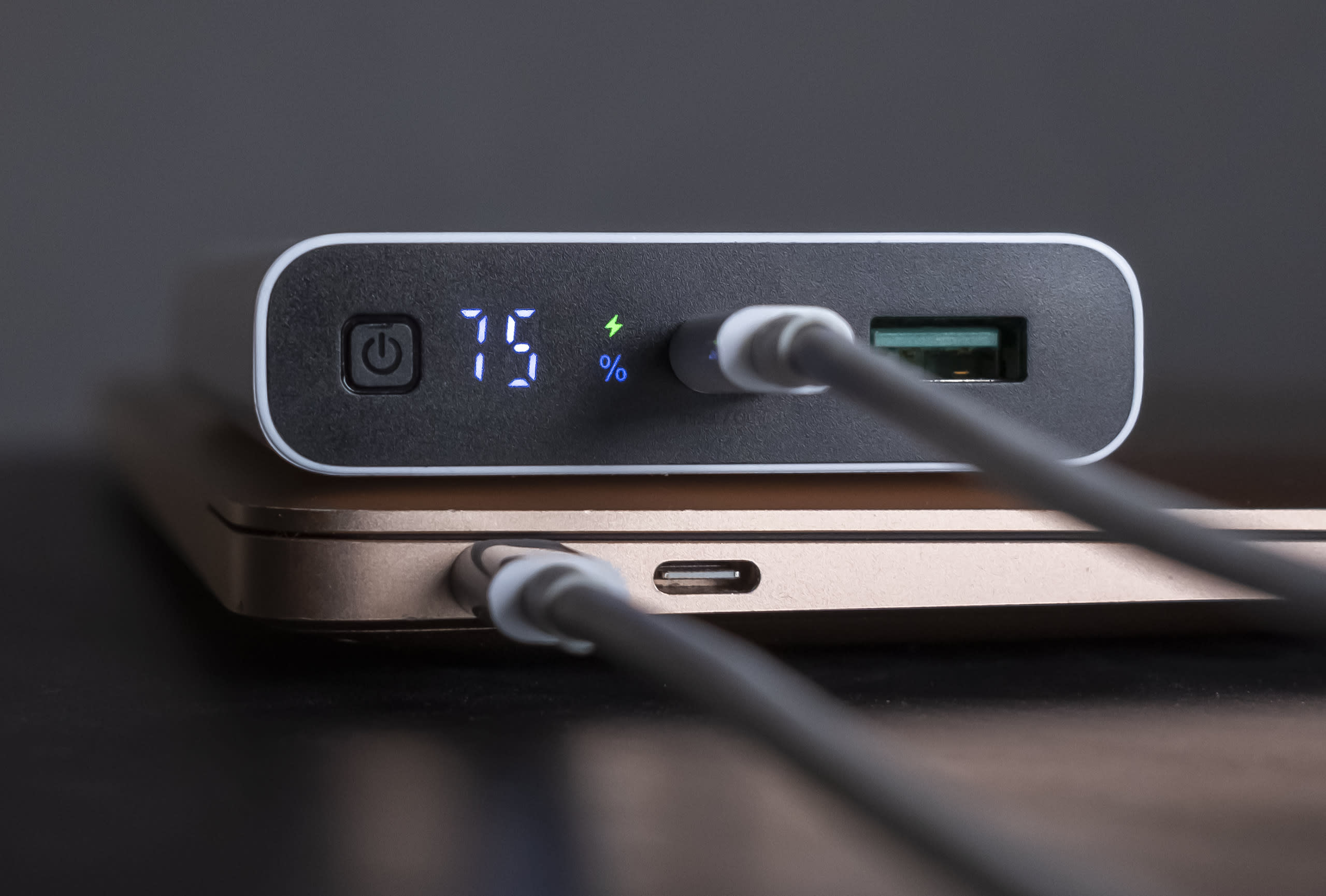 Which is “not very,” but it’s still pretty great.

In the space of a few years, we’ve gone from 5W USB adapters being the norm, to iPads and Nintendo Switches being able to charge at 18W, all the way up to modern laptops drawing up to 140W. This explosion in charging rates over a (somewhat) standardized USB-C connector has been great for consumers who can now mostly charge their stuff with one or two well-positioned adapters. But, it’s made choosing the right power bank to keep all of your devices topped up on the go way more difficult.

Enter Elecjet, a small company which has been carving out a niche for itself by using graphene in adapters and power banks. It launched its first “graphene-enhanced battery power bank,” on Indiegogo back in 2019, and is now back with the Elecjet Apollo Ultra. It’s a 37Wh (10,000mAh) power bank with a couple of notable specs: It can be charged at 100W, and can output at up to 87W across its two ports.

These numbers are very high. On the output side, most 10,000mAh battery packs top out at around 18W; it’s only chunkier chargers that reach figures like 65W. On the input side of things, you’re looking at around 30W as the peak for a high-end portable charger. (There is a market for “laptop power stations,” which can meet and in some cases best Elecjet’s input and output numbers, but those are typically bulky units.)

My personal power bank at the moment is a 20,000mAh Anker PowerCore, which maxes out at around 25W output and 30W input. Although it’s double the capacity of the graphene model, after about a month of using a pre-production unit Elecjet sent me, I don’t want to go back.

Before I get into that, what does a “graphene-enhanced battery” even mean? Elecjet takes the lithium cells that are inside every device nowadays, and plays with the chemistry. Its “composite graphene cells,” mix a graphene solution in with the lithium in the cathode, and then add some layers of graphene coating the anode.

What you get from this sprinkling of graphene is much improved performance at the expense of size. Thanks to offering lower resistance and higher thermal conductivity, Elecjet’s graphene-lithium composite cells can theoretically be charged five times faster, and run through five times more charge cycles, but are about 25 percent less energy dense than regular lithium. So, composite graphene batteries are faster and run cooler, but will either have a lower capacity or a larger size when compared to the batteries we’re used to.

I’m not really close to pushing the Apollo Ultra to its stated 87W limit. The devices I need to charge on the regular are an iPhone 12, a Nintendo Switch and an M1 MacBook Air. It happily charges my Nintendo Switch at 18W, my iPhone at 20W, and my MacBook Air at around 45W.

That last figure is actually higher than the charger that came with the MacBook Air, but on plugging in a 65W Apple charger from a MacBook Pro, I saw essentially the same figure, so it appears that’s a safe rate for the battery. I did run some tests on a friend’s 13-inch MacBook Pro, though, and found it was able to charge it at a similar speed to the 65W charger that device came with, so I have no reason to doubt the output claims.

Speaking of claims, this is nitpicking to the extreme, but the Apollo Ultra’s USB-C port outputs at up to 65W, and its USB-A port can handle 18W. With the PPS power spec it can output at 68.25W, but none of these combinations add up to the claimed 87W output figure.

Output aside, the main benefit for me is how fast you can charge the battery itself. I’m quite forgetful, and will often be getting ready to leave the house with my phone on low battery, and then go to pick up my power bank only to find out it’s empty. I’m sure that’ll still happen, because if I haven’t learned in 36 years to prepare for life adequately I’m not about to change now.

But being able to charge the Apollo Ultra so quickly has meant it’s really not an issue. Plugging it in for about six to seven minutes gives me enough juice to charge my iPhone from the red up to 100 percent, and honestly even a couple of minutes before I run out of the door has got me home without my phone dying on me. Although the pre-production units are limited to 87W input (and so took about 35 minutes to charge), the final, 100W edition will charge from 0 to full in under half an hour. It’s like a safety net for my own stupidity.

Its small size, at least in comparison to my regular power bank, is also a plus. At 130 x 68mm, Elecjet’s bank has roughly the same footprint as an iPhone 13 mini, and it’s about 17mm thick. It’s totally pocketable for most folks, or at the least jacket-pocketable, which is not something I can say about my Anker. It’s also, in my opinion, pretty attractive for a power bank, with nice quality white and black plastics, and a proper display that shows the battery percentage. After years of divining how much power is left with four little LEDs, having so many degrees of precision is very nice.

For everything I love about its size and build quality, there’s no getting around the fact that the Apollo Ultra’s overall capacity is quite low. It can handle about two thirds of a MacBook Air’s charge, two and a bit Switch charges, or three-ish charges of a modern smartphone. That’s… absolutely fine. But the benefits of being able to charge something at 65W are somewhat limited when the battery drains in 35 minutes at that rate.

What I really want is impossible with today’s tech: Something this size, just as performant, but double the capacity. In the future, Elecjet says it will be able to make the power module smaller to mitigate the density issue, and it also claims it has “ a new battery under the wraps” that can get far closer to the density of regular cells.

In the meantime, it would be great to see Elecjet expand its current Apollo Ultra range to include larger capacity batteries. Some options would be good, so buyers can pick the compromise that suits them. A 55Wh battery pack would only be 50 percent larger, but handle a wider variety of devices. Even a 75Wh battery would only be double the volume.

Judging the pricing Elecjet has opted for is difficult. The Apollo Ultra is on Indiegogo at $65, which is honestly the most expensive I’ve seen a battery pack of this capacity in recent memory. But it behaves more like the ultra-high end battery packs that go for $100+, and unlike those it fits in my jeans pocket. But it doesn’t last as long as those— you see my problem. I think $65 is a reasonable price for what you get here. It’s a sleek, cool-looking thing, and the fast-charging makes it more useful to me than a “regular” larger-capacity battery pack.

As with all Indiegogo products, there’s a big caveat in that you are not buying a product that currently exists. Production will begin shortly, and users backing today should expect their devices in early 2022. I have a working unit on my desk, so I’m confident that Elecjet can deliver a power bank as advertised. But the company’s past Indiegogo campaigns do lead to even more caveats.

Both the Elecjet Apollo and Apollo Max campaigns had issues. A few users reported exploding power banks, others never received their units and, perhaps worst of all, users who complained through the Indiegogo campaigns were left without answers for months or in a couple of cases years. All of the complaints have now been addressed, but only in the past few days leading up to the launch of the new product.

Elecjet merged with another company named Real Graphene earlier this year. Both companies were founded by the same person, Samuel Gong, a UC Berkeley engineering graduate, but Gong says he was not involved in the day-to-day operations of Elecjet until the two merged.

When I asked about the complaints surrounding prior campaigns, Gong acknowledged that “there were some issues with the previous products’ quality,” and said most people who didn’t receive their product failed to provide a shipping address through Indiegogo. He said the company “was being managed by another team, and previous campaigns and products were done by [that] team.” He added that the new Apollo Ultra was extensively prototyped and has been evaluated by UL (a well-regarded certification company) for safety. The press pack Elecjet provided touts “8 safety features” and notes the device never exceeded 42C in testing. This matches my personal experience, in which the device was cooler to the touch than my regular power bank, which was charging at a lower rate.

As for not responding to customer support requests, he acknowledged that, after the merger, the company “couldn’t dedicate enough time to previous campaigns.” The reason he gave for the sudden responses to old complaints was that a new team has been hired to manage the Indiegogo campaign, and that team is also aiding backers of old projects from before the new leadership team was around.

I’m extremely into the Elecjet Apollo Ultra. It’s rare that I’m interested, let alone excited, about a product as dull as a power bank, but it’s always good to see something totally new enter any tech space. Those caveats are certainly worrying, though. If you’re not willing to take the risk but are still interested, Elecjet does have its own retail site, and a sizable Amazon presence, for its other products. You could always wait for the product to launch and hit more traditional retail channels (at a slightly inflated price) further down the line.

All products recommended by Engadget are selected by our editorial team, independent of our parent company. Some of our stories include affiliate links. If you buy something through one of these links, we may earn an affiliate commission. All prices are correct at the time of publishing.
View All Comments
Elecjet’s graphene power bank is as exciting as a power bank can be