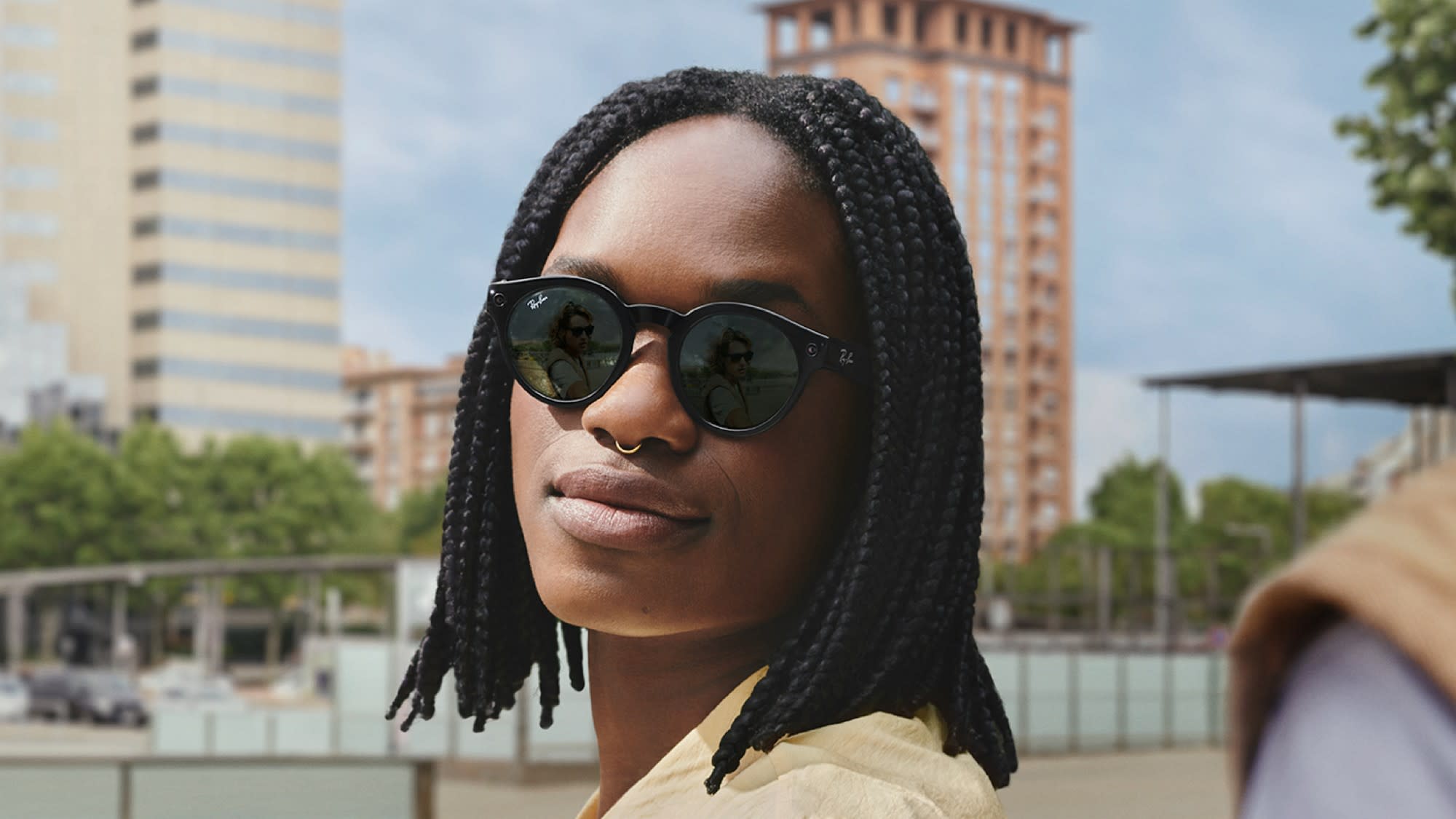 They'll start at $299 and be available in a variety of popular Ray-Ban styles.

Facebook's first foray into the world of smart glasses is here. Confusingly dubbed Ray-Ban Stories, they start at $299 and bring together much of the technology we've already seen in smart eyewear. They'll let you take first-person photos and videos on the go, like Snap's Spectacles. And, similar to Bose and Amazon's speaker-equipped glasses, you'll be able to listen to media, as well as take calls.

But what's most impressive is that Facebook and Ray-Ban owner Luxottica have crammed the hardware components into frames that look and feel almost exactly like a pair of typical designer glasses. The only difference is that the pair of cameras mounted along the corners.

[Be sure to check out our deeper hands-on with the Ray-Ban Stories!]

The Ray-Ban Stories in the iconic Wayfarer style — those chunky '50s-era frames that still look fashionable today — weigh just five grams more than the standard version. And that's including its dual 5-megapixel cameras, Snapdragon processor, touchpad, speakers, three-microphone array and other hardware. I'll be honest, I was a bit shocked when I learned how much they weighed. We're used to smart glasses being thick and heavy, even when they're coming from major brands like Bose. The Ray-Ban Stories look, well, normal.

I suppose that shouldn't be too surprising, though, as both Facebook and Ray-Ban ultimately want to normalize smart frames to the point where they're as common as wireless earbuds. That also helps the companies avoid the mistake Google made with Glass: Those things looked so alien and Borg-like that they were almost instantly reviled.

Privacy remains a concern with all smart glasses, though. The Ray-Ban Stories have a bright LED that lights up when you're taking photos and video, but I could see many people taking issue with the subtle camera placement. We're all used to people capturing everything with their smartphones these days, but doing so still requires more effort than tapping your glasses or issuing a voice command to an all-seeing social network.

If Facebook can successfully deliver the first smart glasses that don't make the wearer feel like a joke, and which the general public doesn't want to throw in a fire, it could gain a serious foothold in the augmented reality market. And, well, we know how much Mark Zuckerberg wants to transform it into a "metaverse company."

In addition to the Wayfarer style, Ray-Ban Stories will be available in the brand's Round and Meteor frames, five different colors, and your typical array of lenses: Clear, sun, prescription, transition and polarized. I'm surprised Ray-Ban isn't offering polarized sunglass lenses by default though, which can reduce glare far better than lenses that are just tinted dark. As for battery life, Facebook claims the Ray-Ban Stories will last for around a day of use (around three hours of audio streaming), while the bundled charging case adds another three days of use.

As ambitious as they may seem, Ray-Ban Stories are also yet another example of how Facebook seemingly can't help but imitate Snapchat, which has been dabbling in smart glasses since 2016. Even their name hearkens back to the social story format that Snap kicked off and was later copied by Facebook, Instagram and pretty much every other social media outfit. But at this point, I don't think Facebook cares if everyone calls them copycats if it ultimately leads to more engagement.

After testing out the Ray-Ban Stories for a few days, I found them far more compelling than any smart glasses today. They don't look as goofy as the Snap Spectacles, and they're far more comfortable to wear than Bose and Amazon's Frames. I could only use the Stories in limited situations though, since I need prescription lenses to actually see well.

Video quality is surprisingly good, very stable even when I’m moving around. The best use case is being able to record your kids without picking up a phone pic.twitter.com/axhkMYfN8e

Still, I was surprised by how smooth video footage looked; it reminded me of YouTube professionals like J. Kenji Lopez-Alt who use head-mounted GoPros. It was also nice to have both hands free to capture fleeting moments of play with my daughter. I was less impressed with the Stories' photo quality, but I suppose it could be useful if you wanted to take a pic without pulling out your phone. You can import your photos and videos from the smart glasses into Facebook View, a new app that lets you quickly edit your media and share it to practically every social media site (yes, even Snapchat!).

While I didn't expect much when it comes to audio playback, the Stories surprised me with sound that was good enough for listening to light tunes or podcasts. I could see them being particularly useful while jogging or biking outdoors, where you want to maintain situational awareness. During the day, I'm never too far from my wireless earbuds, but being able to get a bit of audio from my glasses in a pinch could be genuinely useful.

To control the Ray-Ban Stories, you can either invoke the Facebook assistant by saying "Hey Facebook" or by tapping the button on the right arm, or swiping on the side touchpad. Personally, I never want to be caught in public talking to Facebook, so I mostly relied on touch controls. But the voice controls worked just fine during the few occasions when nobody could hear my shame.

While they're not exactly perfect, the Ray-Ban Stories are the first smart glasses I'd recommend to someone looking for a pair. But the Facebook of it all is still concerning. While the company says the glasses will only collect basic information to be functional — things like the battery level, your Facebook login and Wi-Fi details — who knows how that'll change as its future smart glasses become more fully featured. Perhaps that's why there's no Facebook branding on the Ray-Ban Stories case and frames: It's probably better if people forget these are also Facebook-powered products.

You'll be able to buy Ray-Ban Stories today in 20 different styles in the US, Australia, Canada, Ireland, Italy and the UK. Even though the Ray-Ban Stories may seem to have limited availability right now, Facebook and Luxottica have a multi-year partnership that will result in even more products. It's likely that true AR glasses, which can display information on your lenses, aren't far off. And you can be sure of that, since Snapchat has already shown off its own AR Spectacles.