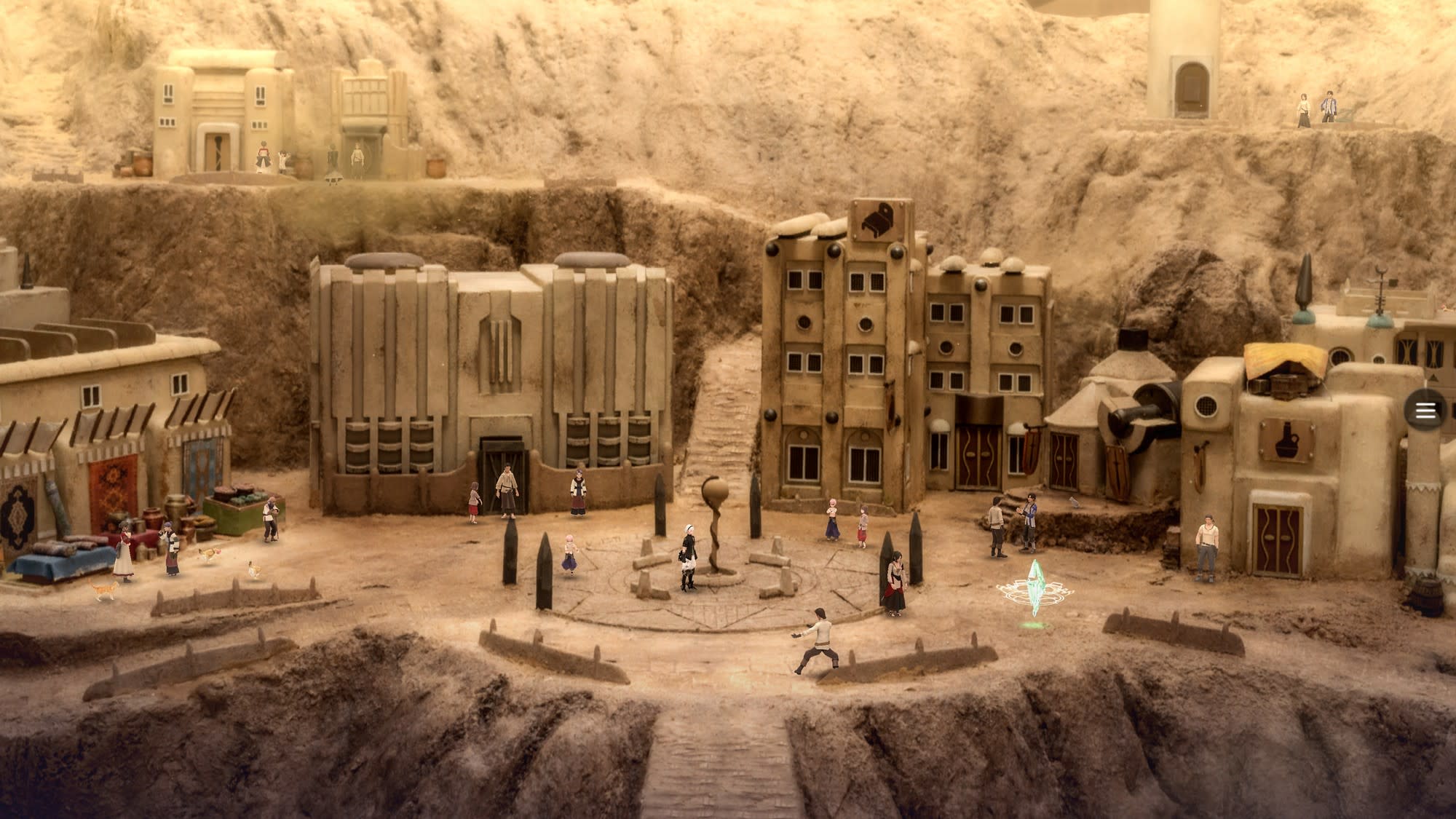 The Apple Arcade exclusive looks like nothing else we've seen.

Hironobu Sakaguchi, the creator of the Final Fantasy series, is returning to the world of epic RPGs with Fantasian, an Apple Arcade exclusive launching today. That’s worth celebrating. After spending the last decade exploring the world of mobile gaming with his studio Mistwalker, Fantasian is Sakaguchi’s first narrative RPG since the 2011 Wii title The Last Story. And it also looks unlike any RPG — the backgrounds are captured from hand-built miniature sets, giving it a diorama-like aesthetic.

Couple that with a unique battle system, which lets you stack up a backlog of enemies to fight all at once, and Fantasian has the potential to transcend the label of a “mobile RPG.” At the very least, it’s far removed from Mistwalker’s shuttered Terra Battle and Terra Wars games on smartphones, and more like what Sakaguchi’s consoles fans expect. (It even has music from Final Fantasy composer Nobuo Uematsu!) While the studio never quite reached the heights of Sakaguchi’s time with Square, 2007’s Lost Odyssey on the Xbox 360 and The Last Story were both reminders that he can still craft a compelling RPG.

Speaking from his Hawaii home, via a translator, Sakaguchi tells Engadget that his love for model kits and crafting things with his hands led to Fantasian’s unique aesthetic. With Terra Wars, he experimented with bringing the diorama look to games, but that was a fairly simple strategy title. "As I was staring at these [miniatures] every day, it got me wondering about how cool it would be to explore and immerse yourself in this world in a more narrative driven experience,” he said.

Aside from the diorama effect, Fantasian appears to be an otherwise traditional RPG. You play as Leo, an amnesiac boy who’s seeking to reclaim his memories in a world ruled by machines. Naturally, you’ll end up diving into a greater mystery: Why the world is being taken over by a mechanical infection. As an Apple Arcade title, you’ll be able to play it on iPhones, iPads, Macs and even the Apple TV, with your progress following across every device.

As for his preferred platform to play the game, Sakaguchi says he mostly plays on his Mac with a studio monitor, so he can closely inspect the game’s 4K textures. “I think that really highlights a lot of attention in detail, especially in the diorama and handcrafted nature,” Sakaguchi said.

And while he admits he’d be happy to see others play the game at its highest resolution, he’s also intrigued by touchscreen interfaces, as it's almost like players are directly touching the hand-built backgrounds. “There's a lot of this human touch, so I think that’s very synergistic,” he said. In that respect, he’d recommend playing on a large-screened iPad. (That’s how I plan to spend most of my time with the game.)

Fantasian’s “Dimengeons” system, an alternate dimension where you can save enemy encounters for a later time, came about almost by accident. While testing the game on a touchscreen, Sakaguchi tells us, he had a character try to reach a treasure chest in a far-off area. He watched as they walked through multiple areas, transitioned between screens, and ultimately found that to be a rewarding way to explore the game’s environments. “So instead of that being interrupted by random encounters, we wanted to give players the option to, if they wanted to, focus on exploration and discovery of the game,” he said.

While you’ll start off being able to store up to 30 enemies, Sakaguchi says you’ll eventually be able to hold up to 40 or 50 enemies. Of course, you’ll be facing a tough battle if you’re underpowered and choose to take on a large batch of baddies all at once, so that’s a gamble gamers will have to consider. To help during particularly hectic fights, there’s also a “gimmick” system that gives the player power-ups, like increased attack power or extra character rounds.

Sadly, not all RPGs can be like Chrono Trigger and let you avoid some enemy encounters entirely. But the Dimengeon system sounds like a useful compromise, especially if you’ve only got a few minutes to play and would rather explore the world than get bogged down in useless fights.

For a typical play-through, Sakaguchi says you can expect both parts of Fantasian to take about 20 hours each to complete. (The first part launches today, the second will arrive sometime later.) If you’re the type of player who likes to explore every nook and cranny, you may even reach 30 hours of playtime. You can also expect a slight play-style shift, with the first part emphasizing a core narrative and characters, while the second will be quest driven.

“The player has a lot of freedom to approach which areas, and which quests they want to do,” Sakaguchi said. “We thought it would help the players to kind of take a breath after establishing the characters and approach the second half with more of a fresh mind.”

As we neared the end of our chat, I couldn’t help but ask Sakaguchi about remaking some of Mistwalker’s earlier RPGs, especially The Last Story, which is only playable on a Wii or Wii U. He’s previously said he wasn’t interested in doing that work himself, so I asked if he would be open to a third-party studio tackling it instead. “Even if we were to outsource something like this to another studio,” he said, “I think in the very end I would want to make sure I'm checking everything. I think it would be inevitable. I have to check everything you know my name is going to go on it.”

He also noted that the amount of energy that goes into a remake is almost the same as making a new game today. That’s particularly true for The Last Story, which was developed in SD for the Wii, and would need to have its assets upgraded to HD or 4K. “As a personal preference, I would like to dedicate that energy and mindshare towards making something new and original,” Sakaguchi said.

As someone who appreciated the aesthetic of Final Fantasy: The Spirits Within — a critical and commercial flop that cost Square a whopping $94 million – I also wondered if Sakaguchi would ever be interested in exploring new narrative avenues, perhaps with a streaming series. “I think there's a lot of interesting possibilities with the new streaming industry, aside from just a straight port of a narrative-driven experience,” he said. “We might be able to almost alter the story in real-time by looking at the user’s feedback.”

His description almost sounds like Black Mirror: Bandersnatch and Netflix’s other narrative experiments, but as he went on further, it shaped up to be even more unique: “I think there might be a scenario in which developers can almost act like a game master, and then put out a piece of content to see how the viewers are reacting... Then you’re almost broadcasting from the perspective of the game master, which is a completely new style of media.”

When asked if he’d be interested in exploring a project like that, Sakaguchi laughed and just said, “I think it’s going to be a lot of work."