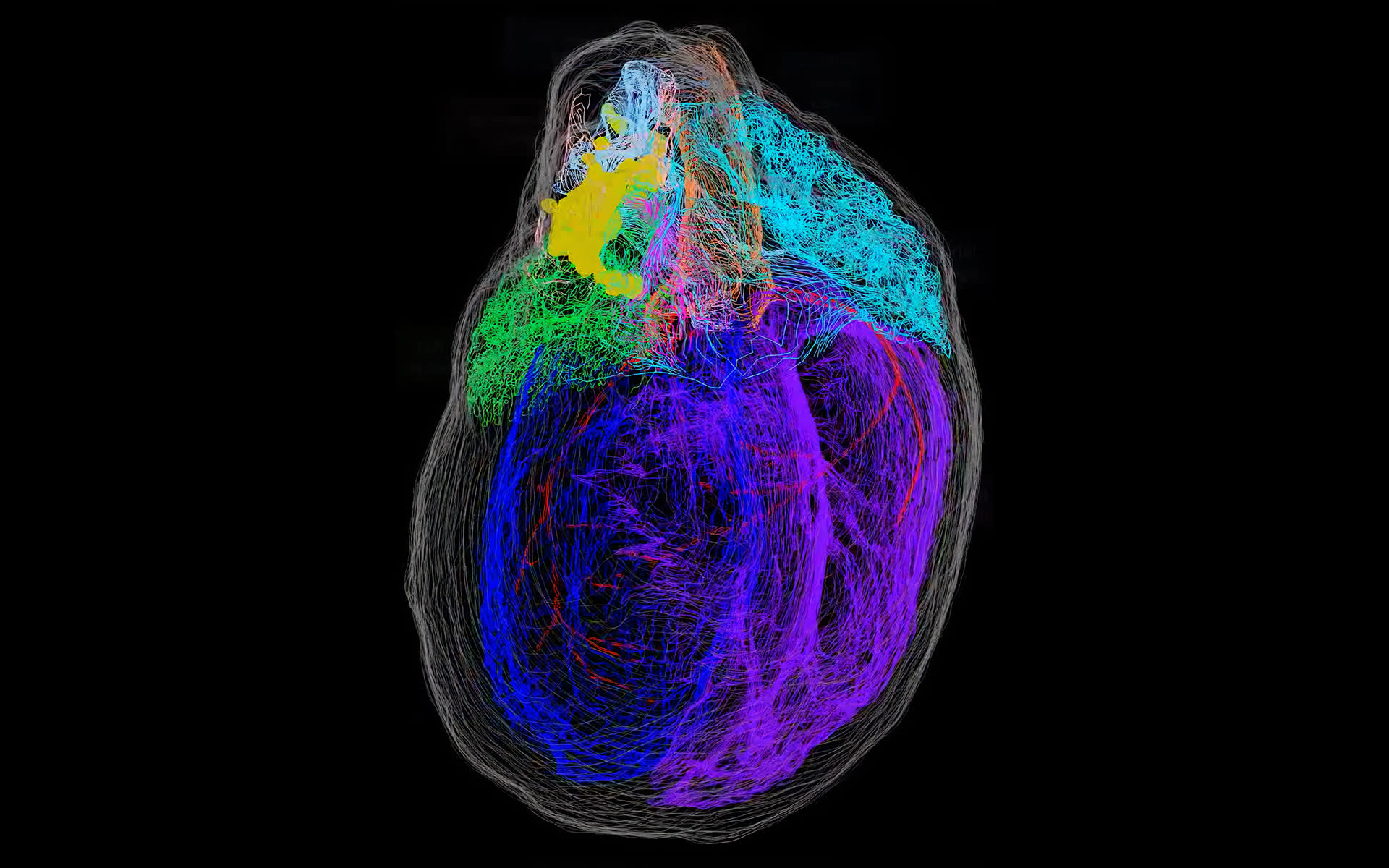 Creating the first 3D map of the heart's 'brain'

Our hearts are primarily controlled by the brain and autonomic nervous system, but we also have a backup. The heart has its own mini-brain called the intracardiac nervous system (ICN), which fine tunes external autonomic signals and keeps the heart pumping smoothly. Its proper function is essential for good health and disease protection, but the problem is that scientists have a poor understanding of how it works. For the first time, researchers from Thomas Jefferson University have been able to show its structure in stunning 3D detail.

The ICN consists of a layer of neurons distributed around the heart that control various cardiac functions. However, doctors and researchers were unsure of where those neurons were located, let alone what specific duties they performed. "The ICN represents a big void in our understanding that falls between neurology and cardiology," co-senior author James Schwaber, PhD. said in a statement.

To help tackle those issues, the team mapped the locations of those neurons in a rat’s heart in vivid 3D detail. “In effect what we have created is the first comprehensive roadmap of the heart's nervous system that can be referenced by other researchers for a range of questions about the function, physiology, and connectivity of different neurons in the ICN,” said co-senior author Raj Vadigepalli, PhD. “The only other organ for which such a detailed high-resolution 3D map exists is the brain.”

Creating the model required two parallel approaches. In one, the team used a system called knife-edge scanning microscopy to create 750,000 images that could be assembled into a single 3D atlas. The second pipeline used “laser capture microdissection” to map individual neurons and sample their gene expression. Those were then placed in context with the map created from the first approach. “Because this hasn't been done before, we were trouble-shooting the protocol as we went along," said co-author Sirisha Achanta.

The 3D map showed that ICN neurons are located in clusters at the top of the heart where the veins and arteries attach. However, it confirmed that they can also be found in other places close to the sinoatrial node. “We know the sinoatrial atrial node is important in creating the heart rate or pace," said co-author Dr. Jonathan Gorky. “Seeing the clustering of neurons around it was something we had always suspected but had never known for sure.”

The team also found sex-specific differences in neuron structures, a finding that could help explain the differences in heart disease between men and women. The team next plans to map a pig’s heart, which is closer in anatomy to a human.

However, the research is already paying dividends, as it is being used by other researchers learning how to improve the function of the heart and other organs. “Our protocol uses everyday lab materials and techniques," said Achanta. "It is highly reproducible and is available now for other organ systems to map not just neurons, but other micro-structures."