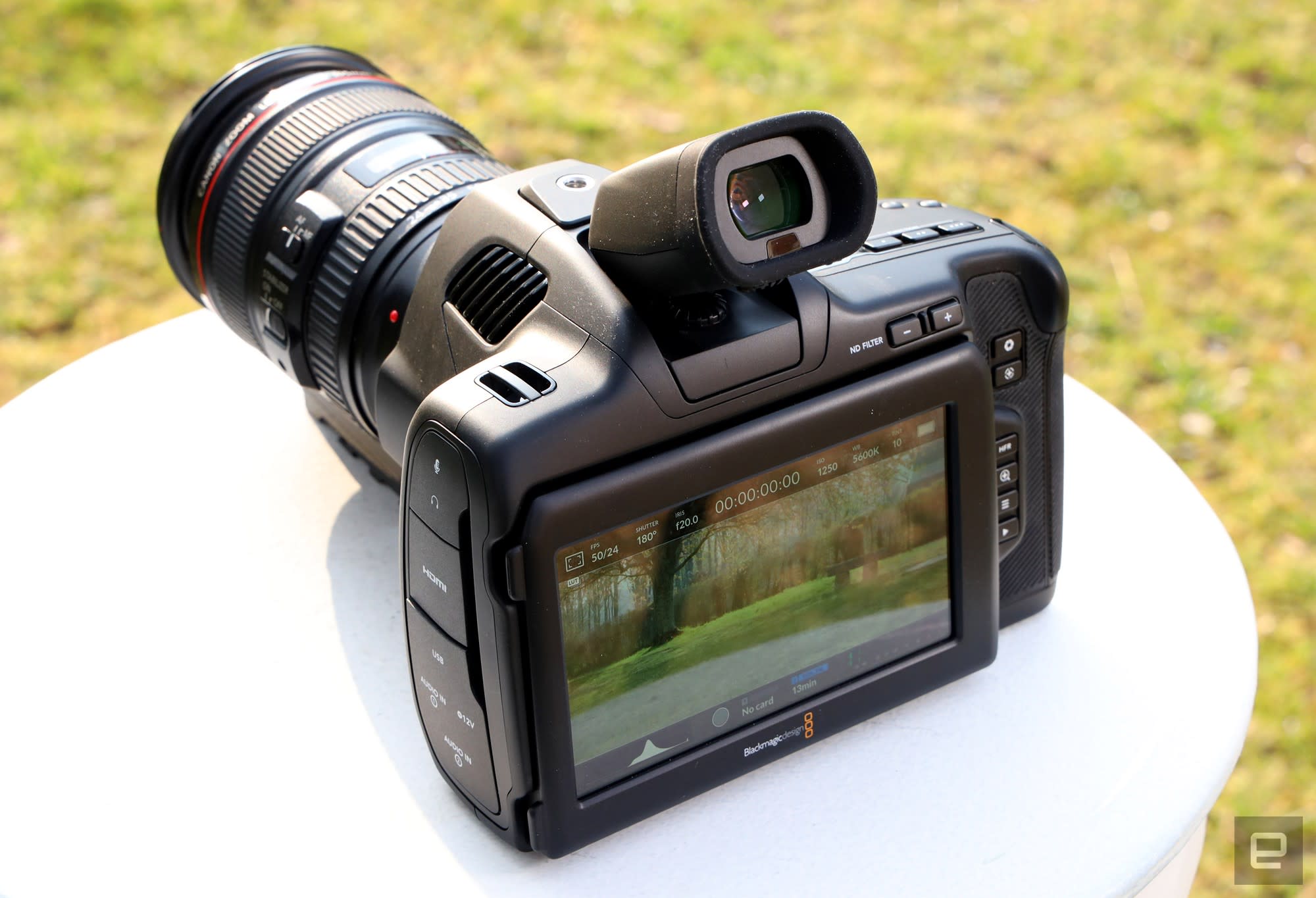 The BMPCC 6K Pro uses the same sensor as the last version, so picture quality is identical. However, it has a number of important new features that make it more suitable for professional cinema shoots, including built-in ND filters, an optional EVF, a brighter display more suitable for viewing HDR footage, a tilt screen and more. I’ve had a chance to use the camera for a time, and here’s how I made out.

First off, a quick recap of the BMPCC 6K. In my review, I found that the Super 35mm sensor (23.10 mm x 12.99 mm) delivered a cinematic image with excellent dynamic range, particularly when capturing 12-bit RAW with Blackmagic’s log settings. With a dual ISO sensor (with native settings at ISO 400 and ISO 3200), it also offers decent low-light performance, comparable to APS-C cameras like Sony’s A6600.

Like the last model, the BMPCC 6K Pro uses Canon EF lenses. I thought that was a good thing when I reviewed the original model, noting that EF glass was more mainstream than RF-mount or other mirrorless lenses. However, that situation is quickly changing, as Canon recently discontinued a large number of EF lenses. To that end, Blackmagic Design might have to rethink its lens strategy for future models.

The new model is slightly bigger and heavier to accommodate the EVF and built-in ND, but the extra heft actually helps the handling. The handle is slightly larger and has a rubberized grip that’s far less slippery than the more plasticky grip on the last model. Otherwise, it has the same carbon fiber polycarbonate composite body as before, which makes it relatively light for its size (2.7 pounds) but gives it a less solid feel than magnesium-alloy mirrorless cameras.

Other features that carry over from before are the dual card slots (CFast 2.0 and SD UHS II), and the excellent, intuitive menu system. It also offers 3.5mm headphone and microphone ports and dual XLR mic inputs (compared to one on the last model), a full-sized HDMI output, 12 volt power input and a USB-C port. The latter allows for slow charging and lets you record video directly to an SSD.

The BMPCC 6K’s superpower was image quality, besting any other mirrorless camera and competing with high-end cinema cameras from Sony, RED and others. Where it fell down, however, was in ease-of-use because of the lack of continuous autofocus, as well as handling in some areas.

From a cinema camera point of view, the BMPCC 6K’s main deficiency was the lack of a built-in neutral density (ND) filter. The Pro version rights that wrong with a built-in motorized infrared IR ND filter with 2, 4 and 6 stops of light blocking, as shown above. That allows you to retain a relatively wide-open aperture to isolate your subject from the background without cranking up the shutter speed excessively.

This feature is easy to use, with dedicated + and - ND buttons that let you boost or decrease the level of darkening. Combined with a relatively low 100 ISO minimum setting, that makes shooting in bright sunlight a lot more practical. Blackmagic also promises that the IR filters reduce both optical and IR wavelengths evenly so you don't get IR image contamination that can make video look too red. In my tests, I saw no signs of that effect.

Another big change is a new tiltable display. The BMPCC 6K’s display is not only a bit dim for outdoor shooting, but also fixed in place. The Pro model ups the brightness ante with 1,500 nits while letting you tilt it up and down, making it practical for judging HDR video on set and seeing images on sunny days.

In practice, the BMPCC 6K Pro has the brightest display I’ve ever seen, helping me accurately monitor footage on a very sunny morning. Glare and reflections are still an issue, but only if the sun is shining directly on the screen, and usually a slight tilt will fix that. It would have been nice to have a flip-around display when filming solo, though the lack of continuous AF makes vlogging impractical.

The BMPCC 6K Pro now supports an optional $495 EVF that attaches to the top hump (which is larger than the one on the last model), giving you a bright and relatively sharp 3.68-million dot OLED view on things. It has a built-in proximity sensor to switch automatically between the screen and EVF, can swivel up and down through 70 degrees and displays frame guides and other status information.

I usually use the viewfinder for shooting video, but an EVF is nice in certain situations (bright sunlight again). This one is bright, relatively sharp and handy to use for high or low angles thanks to the range of tilting. I’m not sure if I’d pay $500 to get one, but it’s certainly nice to have the option.

Moreover, the old model let you choose either battery grip or camera power, but not both, because the old grip slots into the camera’s battery port. The new grip powers the camera from the bottom, so you can run the 6K Pro on both the grip and camera batteries (three in total).

All of this means that you’ll get up to 60 minutes of shooting on a single battery with the display at 50 percent brightness, compared to 45 minutes on the last model. With the battery grip (which is really a must for $145), you can get up to three hours of shooting. However, if you use the EVF or crank up the brightness, you’ll get considerably less. I was able to eke out about 50 minutes on a single battery charge at a brightness level I could see outside (60 percent) — considerably less than most mirrorless cameras.

I really liked the BMPCC 6K and Blackmagic Design has improved it with the Pro model in ways that count most for serious video shooters on a budget. The brighter screen and EVF make it more usable in tricky conditions, and the longer battery life will make shoots go more smoothly. The built-in ND is another key feature that cinematographers will appreciate. And it still delivers some of the most detailed, color accurate and easy to manipulate footage that you can find on any camera in this price range, bar none.

As before, though, the BMPCC 6K Pro is not a great run-and-gun camera because it lacks continuous autofocus, eye detection, built-in stabilization and other niceties that come with modern mirrorless cameras. However, you’re a “real” filmmaker on a budget who uses gimbals and tripods while setting focus manually, for $2,495 this camera is far and away the best bargain on the market.