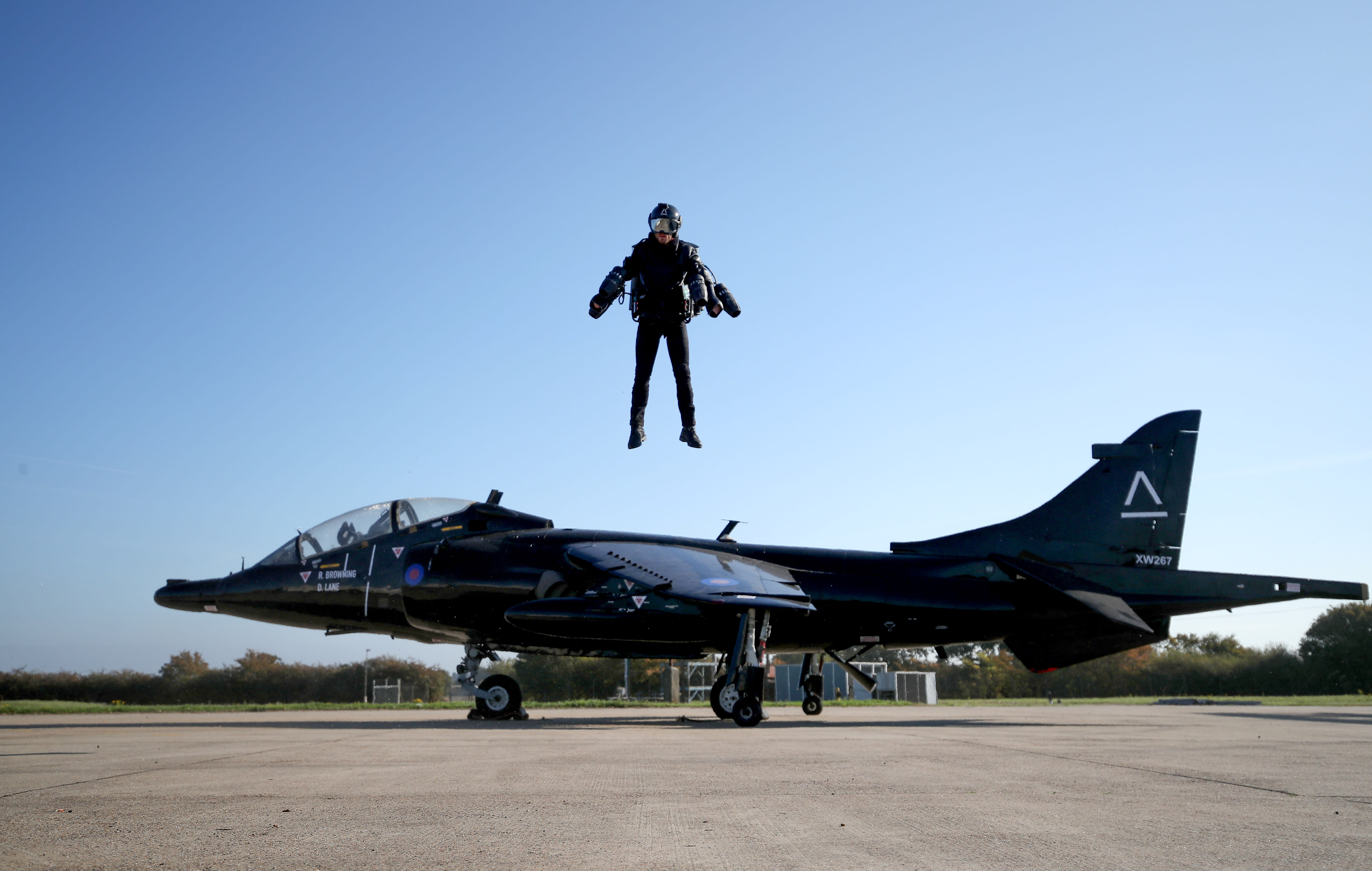 Hitting the Books: How Richard Browning took to the sky like Iron Man

32 mph feels a lot faster when you've got turbines strapped to your wrists.

A. Tarantola
@terrortola
June 12, 2021 11:30 AM
In this article: news, gear, Taking on Gravity, transportation, Hitting the Books, Richard Browning

The 21st century promised us flying cars, but if we get personal rocket packs, who are we to complain? In Taking on Gravity, aviator Richard Browning discusses the development of his unique jet suit, from a fantastical notion to actual invention. In the excerpt below, Browning recalls the record-making 2017 flight that put his name in the Guinness Book of World Records.

Taking on Gravity: A Guide to Inventing the Impossible from the Man Who Learned to Fly by Richard Browning (£20.00) is available now.

In November 2017, Guinness wanted me to appear and set a record as the main event of their World Records Day, an annual event displaying all sorts of wonderful feats of ground-breaking dexterity, velocity and exertion. Their plan was to have me set a world record for the ‘fastest speed in a body-controlled jet engine suit’. But Guinness also give a spotlight to some of the more eccentric elements of world record-breaking. In 2015, a skateboarding dog had taken centre stage. A year later the headlines had been dominated by a biscuit-dunking bungee jumper who hurled himself from a great height and dipped a cookie into a mug of tea as his cord flexed. Given my concern at being portrayed as a Doc Emmett Brown type (the hyperactive inventor from Back to the Future), I wasn’t too keen at first. After the Red Bull and Wired publicity I had pedalled hard in order to avoid an association with terms such as ‘wacky’ and ‘eccentric’.

‘This isn’t us,’ I explained to the Guinness representative. ‘Think Tony Stark, Elon Musk and the US Navy SEALs. We’re not the next skateboarding dog. I love the Guinness Book of World Records, but this has to be sincere and audacious.’

I was assured that Guinness intended to present the attempt with an air of seriousness, and that their desire to have the jet suit at the event was extremely sincere. Apparently they had previously featured high-end performances with brands such as Mercedes. In the end, I caved. ‘Oh sod it,’ I said. ‘Let’s do this. Find a stretch of water so I can fly safely and I’ll attempt to set a time.’

My world record attempt was seat-of-the-pants stuff; it became a live research and development exercise. I had no real idea of the speeds attainable by the suit and I hadn’t put any thought into how best to push the suit’s limits because doing so over land would have been rather dangerous. When the day eventually arrived, it suddenly felt like quite a big deal. Given my busy schedule in the build-up I had barely done any preparation and wasn’t sure of being able to execute a suitable flight time. When I got to the designated lake in Reading called Lagoona Park I was suddenly under the watchful gaze of dozens of cameras, drones and smartphones owned by various members of the Guinness team.

A chap from the Guinness Book of World Records pointed out the course over which I was to travel. The plan was to fly from shore out over the lake and around a large buoy at the other end, banking as I approached the turn, returning to my original position in the quickest possible speed over a set distance of 100 metres. Given that nobody had attempted this stunt before, I was set to have my name in the hallowed to me alongside the world’s tallest man even if I didn’t fly particularly quickly. That didn’t stop me taking a keen interest in the details, however.

I strapped on the suit and stepped towards the water’s edge for a couple of practice flights. The weather was less than ideal. Cold and drizzly, it was a typically British November day. And as I rose from the ground, another elemental factor came into play. A hefty crosswind buffeted my arms as soon as I’d gathered speed, causing me to experience a significant and disconcerting lateral yaw. Drifting over the water, I reached the turn with a fair degree of speed but managed it all the same, the odds of a disastrous failure now shortened considerably. Luckily, my suit was equipped with a life jacket designed to inflate upon first contact with water. Not so luckily, I hadn’t found the time to test its reliability. Were I to make a splashy mess of this world record attempt, I’d have to hope the safety equipment operated under pressure.

There had been yet another, more terrifying problem to deal with. During that first test flight I had taken off with way too much fuel for a run based on speed rather than distance. I’d been deliberately conservative to avoid the possibility that the engines might run out halfway round, dropping me into the water like a stone. But with so much weight strapped to my body I was never going to set a quick time. With the fuel load reduced on the second run, maintaining a steady altitude had become a real issue. As I turned around the buoy burning fuel and shedding weight by the second, I found myself climbing higher, much higher, and I drifted skywards to well over 60 feet, my speed increasing too.

My brain worked through some rapid calculations. ‘Right, I’ve got two problems here,’ I thought. ‘I’m too high and I need to lose velocity to land safely, but I can only fix one issue at a time.’

In a split second, and with landfall looming, I reduced my speed, holding position over the beach at one end of the lake as my head whirled. I’ve never climbed to this altitude in the suit before! Falling now would result in a serious injury. Cautiously I released the trigger slightly and edged towards land. My adrenalin spiked; I vectored up and down in a jerky fashion, a life of unbridled curiosity flashing in front of my eyes as I thankfully began to descend and nervously reached the floor. The stressful landing had probably lasted only a few seconds, but felt like hours.

One of the Guinness team came rushing over and enthusiastically told me I’d recorded a speed of 32 mph. I was pleased but it felt faster, and I knew that I could have a crack at bettering it on the next run – but maybe after a cup of tea.

Some twenty minutes later I was spooling up again, this time with the suit power adjusted to reduce any unwanted lift. I launched aggressively and shot off at what felt like a real rate of knots, skimming low over the water. The marker buoy loomed and I vectored hard to the side to execute a rapid turn, barely noticing that I’d dropped perilously close to the lake’s surface. I was now only a couple of metres from the water and my height was decreasing. Then I felt the uncomfortable sensation of wet feet.

My body and suit submerged. The engines choked and instantly stalled as they went under. I hung in the water for a second or so. ‘Well, this is new,’ I thought. ‘How do I get out of this?’

With a bang, the life jacket deployed, pulling me upright until, somewhat embarrassingly, I realized I’d landed in only 4 feet of water and was perfectly capable of standing up without the assistance of a self-inflating buoyancy vest, or the jet ski that was speeding towards me. I stood at the water’s edge, dripping wet, posing with my thumbs up for the book’s official photographer, delighted to have set a world record and simultaneously pondering.

All products recommended by Engadget are selected by our editorial team, independent of our parent company. Some of our stories include affiliate links. If you buy something through one of these links, we may earn an affiliate commission. All prices are correct at the time of publishing.
View All Comments
Hitting the Books: How Richard Browning took to the sky like Iron Man