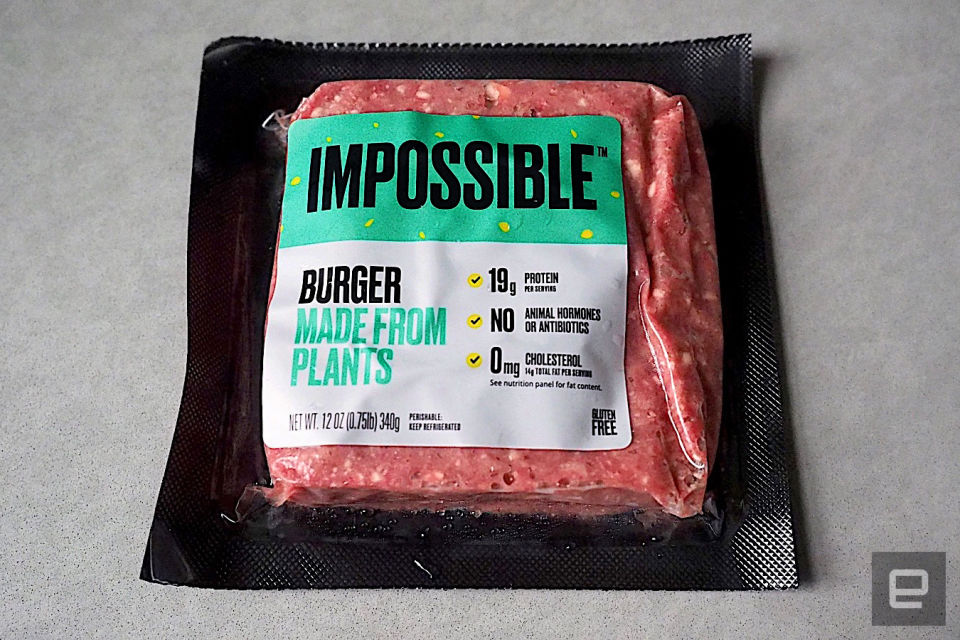 Starting tomorrow, Impossible Burger will be available in over 1,000 grocery stores, expanding to 777 additional locations in California, Nevada and the greater Chicago area. The faux meat product will be available in all Albertsons, Vons, Pavilions and Gelson’s Markets in Southern California, all Safeway stores in Northern California and Nevada, all Jewel-Osco stores in greater Chicago, portions of eastern Iowa and northwest Indiana, all Wegmans on the East coast, and all Fairway Markets in New York City.

Impossible Burger first made its grocery store debut last September in Gelson’s Markets in Southern California, followed by several Wegmans and Fairway stores on the East Coast. In grocery stores, the “raw” Impossible Burger comes in 12-ounce packages similar to ground beef, and will be priced somewhere between $8.99 to $9.99 depending on location. Like with the real deal, the faux meat can be used not just in a burger patty, but also in lasagna, chili, or any other recipe that you would typically use ground beef.

According to a statement, Impossible Foods plans to aggressively expand its retail presence throughout 2020, even amid the pandemic. “We’ve always planned on a dramatic surge in retail for 2020 — but with more and more Americans’ eating at home under ‘shelter-in-place’ orders, we’ve received requests from retailers and consumers alike,” said Impossible Foods’ President Dennis Woodside.

In this article: impossible, Impossible Foods, impossible burger, thebuyersguide, news, gear, tomorrow
All products recommended by Engadget are selected by our editorial team, independent of our parent company. Some of our stories include affiliate links. If you buy something through one of these links, we may earn an affiliate commission.