What Intel’s Thunderbolt 4 means for your next PC

It's hard to get excited for a new interface protocol, I get it. But Intel's upcoming Thunderbolt 4 tech could end up making your next PC a lot more capable than today's systems. Just imagine hooking up two 4K displays to an impossibly thin and sleek ultraportable, which also happens to support data speeds twice as fast as Thunderbolt 3 systems. Surely that's enough to muster a bit of enthusiasm.

From the beginning, Intel's Thunderbolt standard has been a way for the chipmaker to offer blazing fast ports that outshine USB in every way. It was originally known as Light Peak and was also co-developed with Apple. You can think of Thunderbolt as a direct gateway to your computer's PCIe connections, something you'd typically have to tear open your computer to access. The first two generations of the standard used the miniDisplayPort connection, but with ThunderBolt 3 in 2015, Intel switched over to USB-C. That's when the technology truly hit its stride -- besides that slimmer port, it was significantly faster than before and made it easy to connect 4K displays.

At first glance, Thunderbolt 4 doesn't seem like a huge improvement over its predecessor. They both offer the same maximum bandwidth of 40 gigabits per second and use the USB-C port standard. Where they differ is how they use that bandwidth. Intel is mandating stronger minimum requirements for Thunderbolt 4, so you can be sure that every system supports two 4K displays (or a single 8K screen). That's not to say that Thunderbolt 3 PCs couldn't do that, but it wasn't always a guarantee. 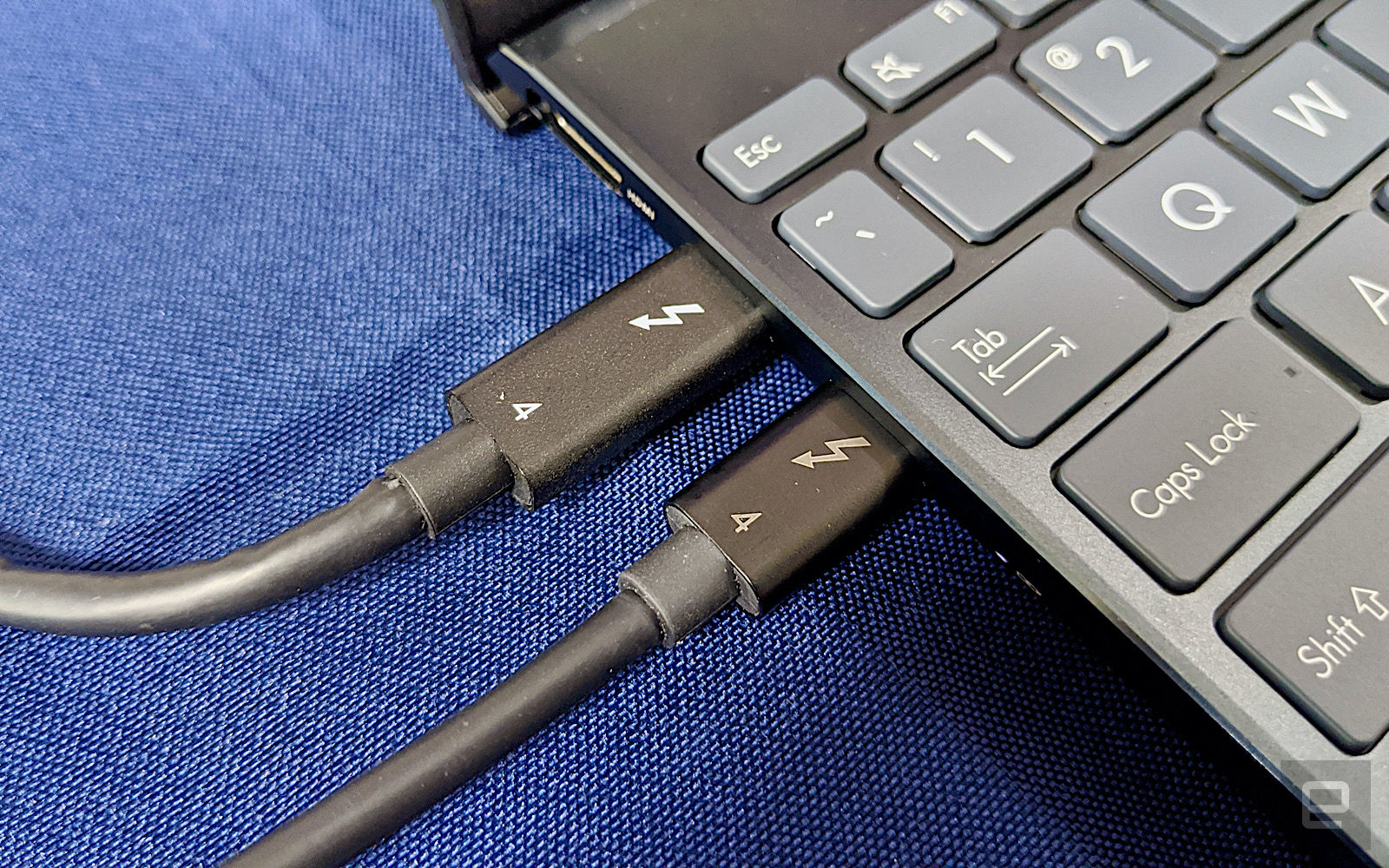 Storage speeds will also jump from 16 Gb/s to 32, making Thunderbolt 4 a godsend for video editors or anyone else moving gigantic files around. Intel is also bumping up security by requiring its VT-d virtualization technology that protects against Direct Memory Access, or DMA, attacks. That includes the recent Thunderspy vulnerability, a complex hack that could allow someone to steal your data, even if your system was locked and had encrypted storage. Every major OS already supports VT-d DMA protection as of last year, but since that security tech is fairly recent, Intel tells us it couldn't require it when Thunderbolt 3 launched.

So what does all of this mean for you? Probably not much if you're just browsing the web and not really pushing your PC much. But if you're the sort of user who regularly connects your notebook to multiple screens, or juggles vast amounts of data, Thunderbolt 4 could make your life a lot easier. Intel is debuting the technology this fall alongside its Tiger Lake chips, which are expected to be powerful in their own right.

You can also look forward to a few other nice bonuses with Thunderbolt 4: Intel is requiring USB-C charging on at least one port, as well as the ability to wake up your PC when it's connected to a dock. Those accessories will also be able to support up to four Thunderbolt ports, which should make it easier to string together all sorts of gadgets to your desk-bound laptop.

Thunderbolt 4 also supports the upcoming USB-4 standard, which helps to future-proof it a bit. Confusingly enough, USB-4 shares most of the features of Thunderbolt 3 -- and don't forget, they all rely on the same USB-C port. If you're not paying close attention to the specs of your next PC, it may also be tough to tell if it supports Thunderbolt 4 or 3. You'll likely only see the small lightning logo on most PCs, with no visible version number, according to Intel.

It's a shame that after spending years developing an intriguing new protocol, something that could genuinely help consumers, Intel may stumble a bit when it comes to communication. I know plenty of techies who still have trouble dealing with the different types of USB-C ports on their systems. Thunderbolt 4 may just well lead to more confusion.

Still, there's a lot to look forward to, especially if you push your PC more than most. And maybe, these improvements will lead to more computer makers adopting Thunderbolt. Microsoft has infamously avoided the technology on its Surface machines, which are otherwise some of the best PCs you can buy today. Maybe one day, we'll finally get a Thunderbolt-equipped version of a Surface tablet that can be powered by an external GPU.