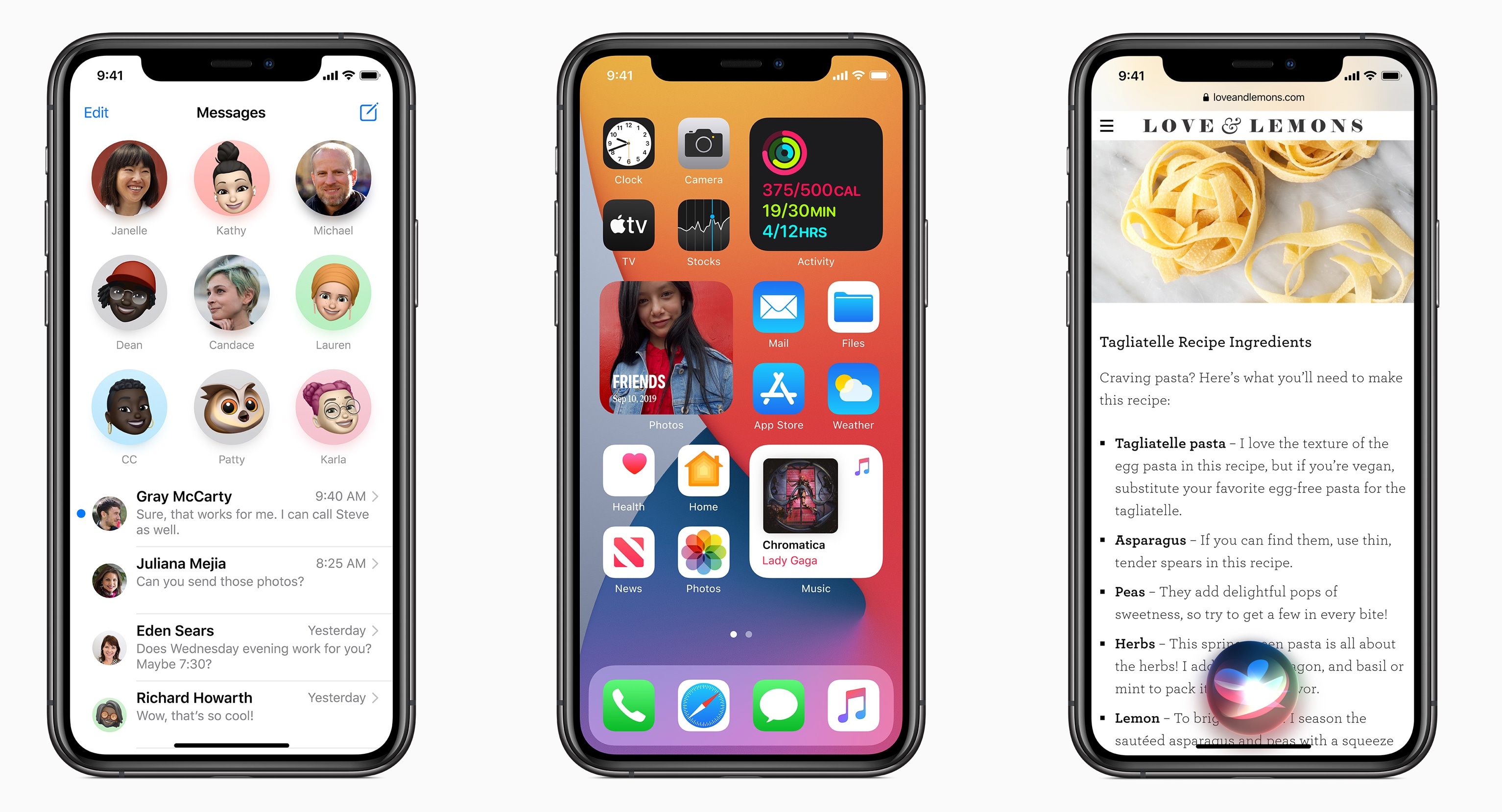 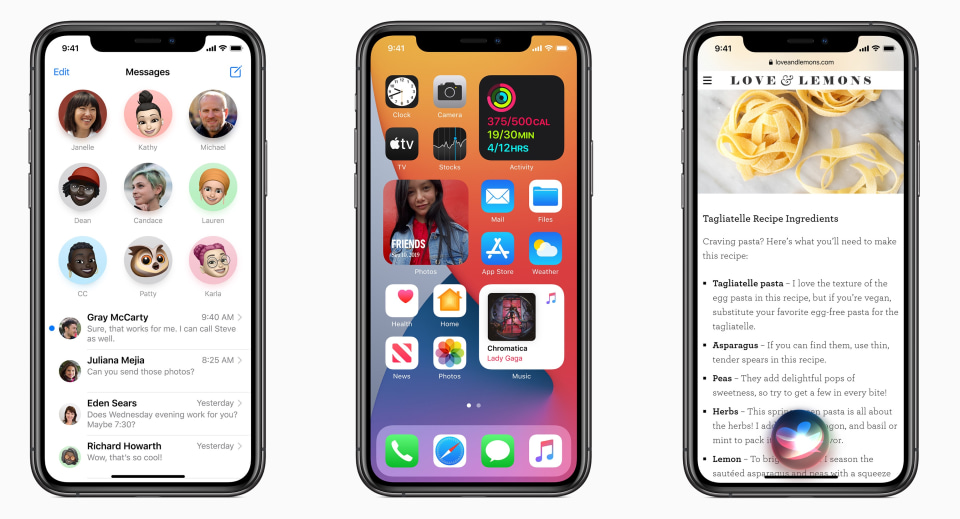 Apple’s WWDC event may be online-only this year, but some things never change. As expected, Apple is showing off iOS 14, which is expected to arrive sometime this fall alongside the next iPhone.

For 13 years, the iPhone’s home screen has been a relatively inflexible grid of apps and, since iOS 4, app folders. That’s finally changing this year, as Apple is adding a few new ways to view your content and make the home screen more useful. It starts with something called the App Library, which makes finding where your apps are stored a lot easier. Apps are automatically grouped by categories; in a lot of ways, it seems like automatic folder creation. 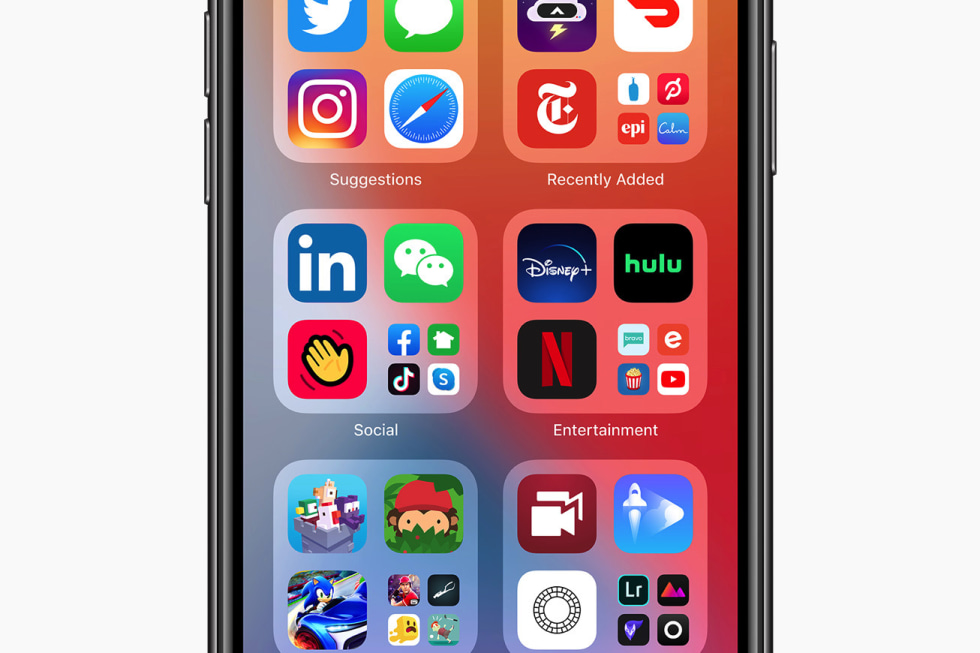 The app library has a search bar, naturally, and it also shows a recently added and “suggestions” group so you can find things there quickly.

Something iOS users have requested for years appears to be coming true: Home screen widgets. The iPhone and iPad have had a dedicated screen for widgets for years, but last year Apple let iPad users pin a column of widgets to the home screen. Now, iOS 14 will let you place widgets pretty much wherever you want. It’s a much-needed change, but it looks like a major improvement.

Widgets still start on the left of the home screen, but from there you can tap and drag one onto your home screen. Widgets now have multiple sizes so you can customize the content to fit your screen properly. There’s also something called a “smart stack” that lets you put multiple widgets in one space that you can swipe through to see different content quickly.

Apple is also building a new picture-in-picture mode, something that is a clear nod to how important mobile video is these days. you can pin it around whatever content you’re looking at as well as adjust the width.

Siri is getting a few tweaks as well — instead of taking over the full home screen, it shows up as a small, well, widget when you summon it. It can also deliver results at the top fo the screen with a small notification style drop down from the top of the screen. In addition, you can send voice messages instead of just text, and the dictation features now transcribe right on the device rather than the cloud. That should speed up how quickly it can turn your voice into text.

iOS 14 will use Siri for a new app called Translate, as well. It uses on-device machine learning to translate your voice between 11 languages. That’s something Google has done for years, and Apple is certainly a bit behind the curve here, but it’s still a noteworthy addition.

Messages is one of the most important iOS apps, and this year group texts are getting a major change. For starters, iOS 14 lets you pin your most-used conversations at the very top of your list. Apple is also adding inline replies to group texts, which lets you see a specific thread of conversation rather than just one long scroll of messages. There’s also a direct message feature to ping someone specifically in that group; you can set notifications so that you only get notified from the group if you are specifically mentioned. Groups can also get their own icon, which can be an emoji or some other images. Memoji, Apple’s custom emoji, are also getting an update with 20 new head and hair styles as well as face coverings and more age options.

Apple also discussed features for when we’re back out in the world, like Maps. First off, the new map designs that started rolling out last year are coming to the UK, Ireland and Canada. The company is also expanding on the improved location-finding features that were added last year. The Maps app will now host guides for cities that are curated by some unnamed partners to help you find local points of interest beyond just a simple search.

Cycling directions are coming to the Maps app for the first time, as well. Apple said this is part of an initiative to give users more green or sustainable travel options in the app. It’s first launching in New York City, Los Angeles and the San Francisco Bay Area in the US for starters, as well as a few locations in China as well. For EV drivers, there’s a new EV routing option as well as options to find charging stations specifically for your car.

Speaking of transportation, CarPlay is also getting some updates worth noting. New categories of apps being added are parking, EV options and food pickup locations. But more significantly, Apple is finally announcing its plans to launch digital versions of car keys. BMW’s 2021 5-series will let you lock, unlock and start your car with an iPhone. Naturally, keys live in the iPhone’s “secure enclave” for added security, though we don’t know yet exactly how that’ll work. This feature isn’t limited to iOS 14, either — Apple says it’ll come to iOS 13, as well. Apple says it’s standardizing the feature so that other automakers can build it into their own cars, a well, and Apple says other automakers should come on board in 2021.

App clips is another noteworthy feature getting added to iOS 14. Rather than make you install a full app to get functionality you need, it quickly installs a portion of the app that you might need to, for example, rent a scooter. Clips don’t show up on the home screen and don’t stick around after you’re done (unless you want them to). They can be launched via NFC or QR codes, making them ideal for launching at specific locations.

Apple didn’t give any word on when iOS 14 would launch, but it’s safe to say we should see it this fall alongside new iPhones — though it wouldn’t be surprising if it came a little later this year thanks to COVID-19. As for what devices it’ll work with, it goes all the way back to 2015’s iPhone 6s.

In this article: ios, wwdc2020, apple, ios 14, news, gear
All products recommended by Engadget are selected by our editorial team, independent of our parent company. Some of our stories include affiliate links. If you buy something through one of these links, we may earn an affiliate commission.