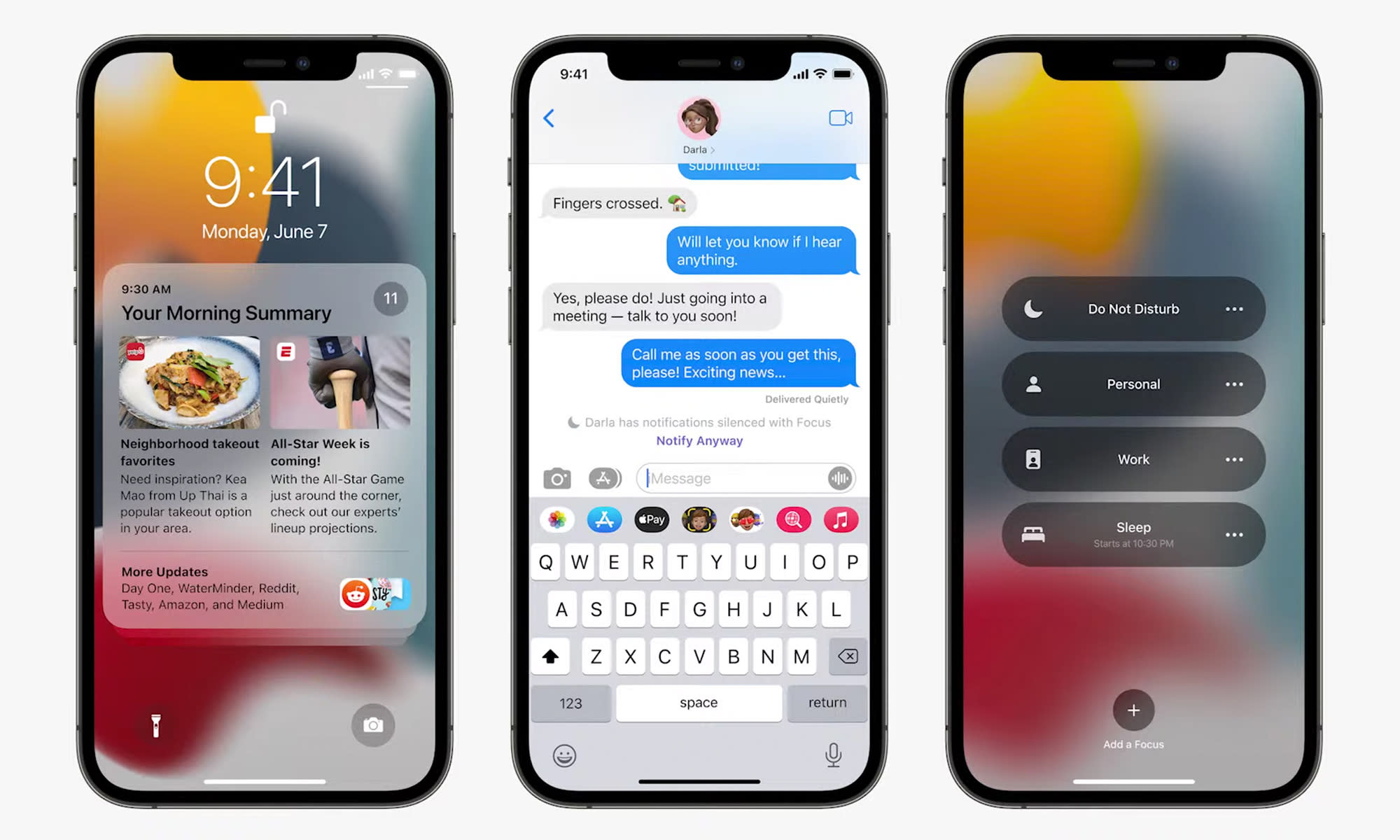 Spatial audio will be coming to FaceTime to make the video calling app sound more realistic. Your friends' audio streams will sound like they're coming from the side of the screen they're on. Noise reduction can also make you sound clearer by muting distracting sounds like leafblowers or vacuum cleaners in the background. If you want your caller to hear everything around you, wide spectrum mode can let your mic pick up your voice as well as the rest of your environment. You can also clean up the way your background looks by applying a new portrait mode to blur out everything but your face.

A new Grid view lets you see everyone in tiles while FaceTime links are coming to help schedule calls. You can send these in Calendar, WhatsApp and more, and even those on Android and Windows devices can use the links to join your FaceTimes from their browsers. SharePlay will let you watch a video with your friend in a call, and you can keep your movie playing while you explore other stuff on your phone, thanks to Picture-in-Picture support. Apple is introducing a SharePlay API to allow other developers to use this feature and already has support from partners like Disney+, Hulu, HBOMax, Twitch, TikTok and Paramount+.

In addition to watching a show with your friend over FaceTime, you'll also be able to see what's on your phone through Screen Share.

Federighi also announced updates to the Messages app. Instead of having to keep your unread notifications around to remind you when you receive something from a friend but aren't ready to check it out yet, the new Share With You feature can help. When friends send you photos in Messages, for example, the relevant images will be saved to your device album. Apple determines relevant images as those that you're in, so you won't automatically get screenshots cluttering up your gallery. Share With You also works with Apple Music and Apple TV so that playlists and shows that people send you can be pinned and easily found again later.

Apple is also refining the way notifications work in iOS 15 to make it easier to disconnect when you need. Aesthetically, iPhone alerts will be easier to read with new contact photos for people that message you and larger icons for apps so you can more easily identify which app pinged you.

A notification summary gives you a snapshot of all the alerts you've missed, and arranges them based on what the system determines are your favorite apps. More relevant notifications will be placed nearer the top, too. When you need a break from the relentless onslaught of pings, Focus mode turns all most of them off across the system. Apple will use "on-device intelligence about your past activity to suggest apps and people to allow notifications from." You can also set different Focus profiles like Work, Sleep and personal to prioritize different apps or contacts during different times of day. When you change profiles, you can also have it set so your iPhone's home page changes to feature different apps — Slack and Email when Work is enabled while Reddit and YouTube feature when you're in Personal mode, for example.

There's also a Do Not Disturb mode to silence everything, and when you have one of these modes on, a status display in apps like Messages will let your contacts know you won't be getting back to them immediately. These modes also apply across devices like iPhones, iPads, MacBooks and Apple Watch.

Federighi also introduced something called Live Text, which seems very similar to Google's Lens feature. It will scan things you're pointing your camera at and highlight things it recognizes as words. If you're aiming your viewfinder at a whiteboard, for example, Live Text will highlight what's written there, and you can tap the selection to copy it as text that you can then paste somewhere else on your phone. This also works for pictures (or screenshots) that are already on your device's gallery. Much like Google's system, Live Text can also identify things like locations in a picture or the breed of a dog you saw on Reddit and display links to open your browser for a relevant website.

Photos is also getting easier to use with new search integration. Your Spotlight search for everything in your device will now return images in your photo albums, too. You can look for specific people or scenes from your home screen and even find pictures by entering text that was in them. In another update reminiscent of a popular Google feature, Apple is bringing Memories to your photo album, and will curate and stitch together your photos and videos for AI-generated home movies. But unlike Google's offering, iOS 15 will also bring Apple Music into these clips, setting some empathetic background music to add to the experience. Apple will also add animated title cards to these videos. You can customize memories to pick a different song or add and remove pictures, and the system will add filters and time the transitions and speed of the slideshow to the music.

Throughout iOS 15, Apple's made some small changes too. It's making results for contacts richer, letting you see conversations with them and their location in addition to their call, text, facetime and email.

After adding credit cards, store loyalty cards and transit or theme park passes to Wallet, Apple's continuing to add more capabilities. The app already supported car keys for select vehicles, and with iOS 15, you can get hotel room keys starting this fall with over 1,000 Hyatt properties globally. Apple is also bringing identity cards to Wallet. In participating states in America, you can scan your driver's license into the app. The data is securely encrypted and stored in your secure element. Apple is also working with the TSA to use Wallet IDs in airports.

Meanwhile, Apple Maps is expanding to Spain and Portugal today, as well as Australia and Italy later this year. The company added a globe view to Maps, and you can zoom into cities to see more details like new custom designed landmarks. Unlike Google's Street View, this isn't a photo-realistic rendering but drawings of the area, with impressions including crosswalks, road lanes, trees and overlapping highways. A nighttime mode makes the buildings look like they're lit by the moon, too.

Navigations are also getting updates — you'll be able to pin your favorite transit routes to the top of results. Apple is also introducing an AR-based feature in select cities like London, San Francisco and New York City to let you point your iPhone at buildings to figure out where you need to make your next turn.

Federighi wrapped up the iOS 15 section of WWDC 2021 saying there's more to come, including voice search, support for cross-app drag-and-drop and new outfit options for emoji as well. It won't be long now before we can start playing with these new features ourselves, so stay tuned for our first look to learn how useful these might actually be.

Follow all of the news from WWDC 2021 right here!